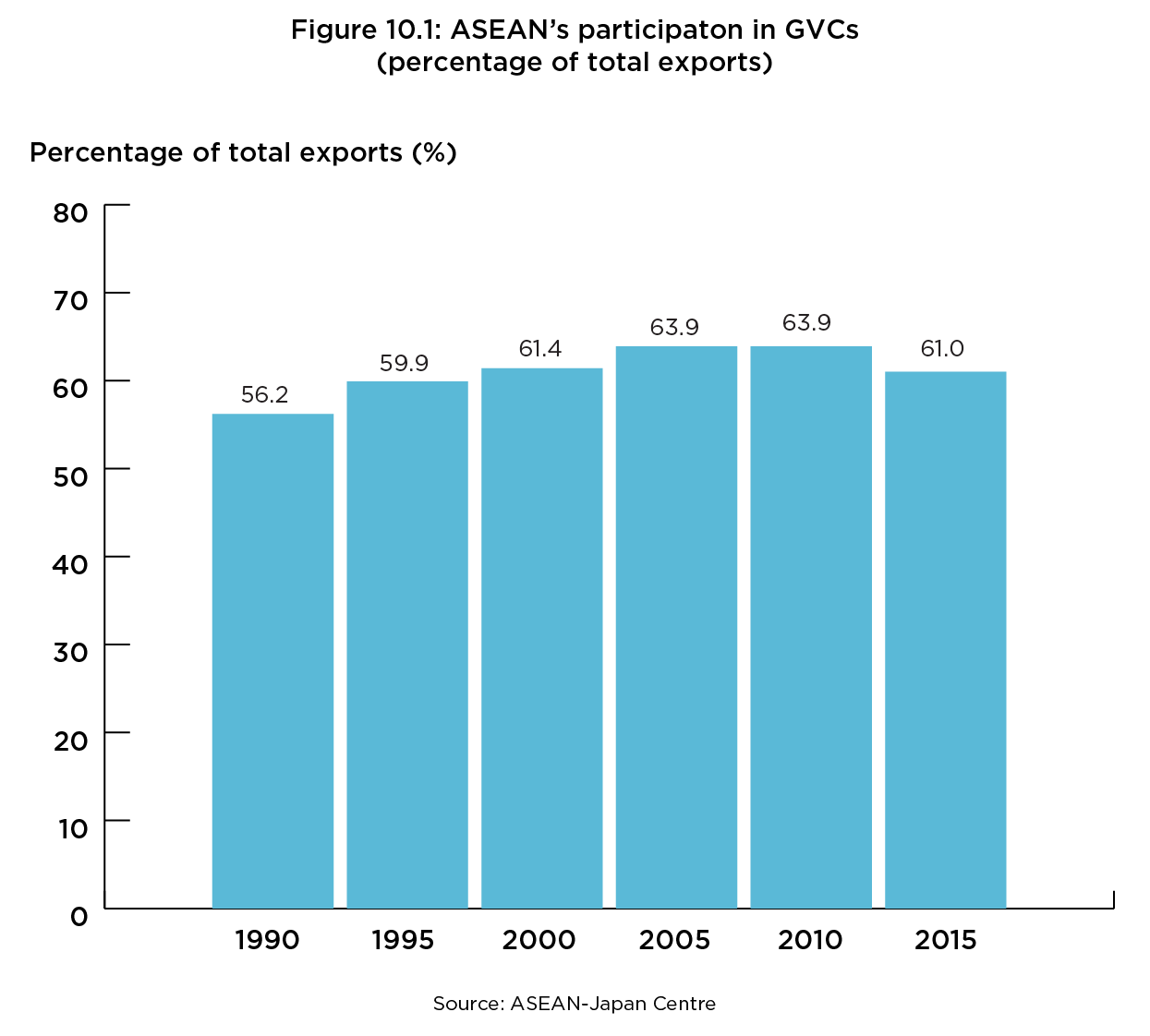 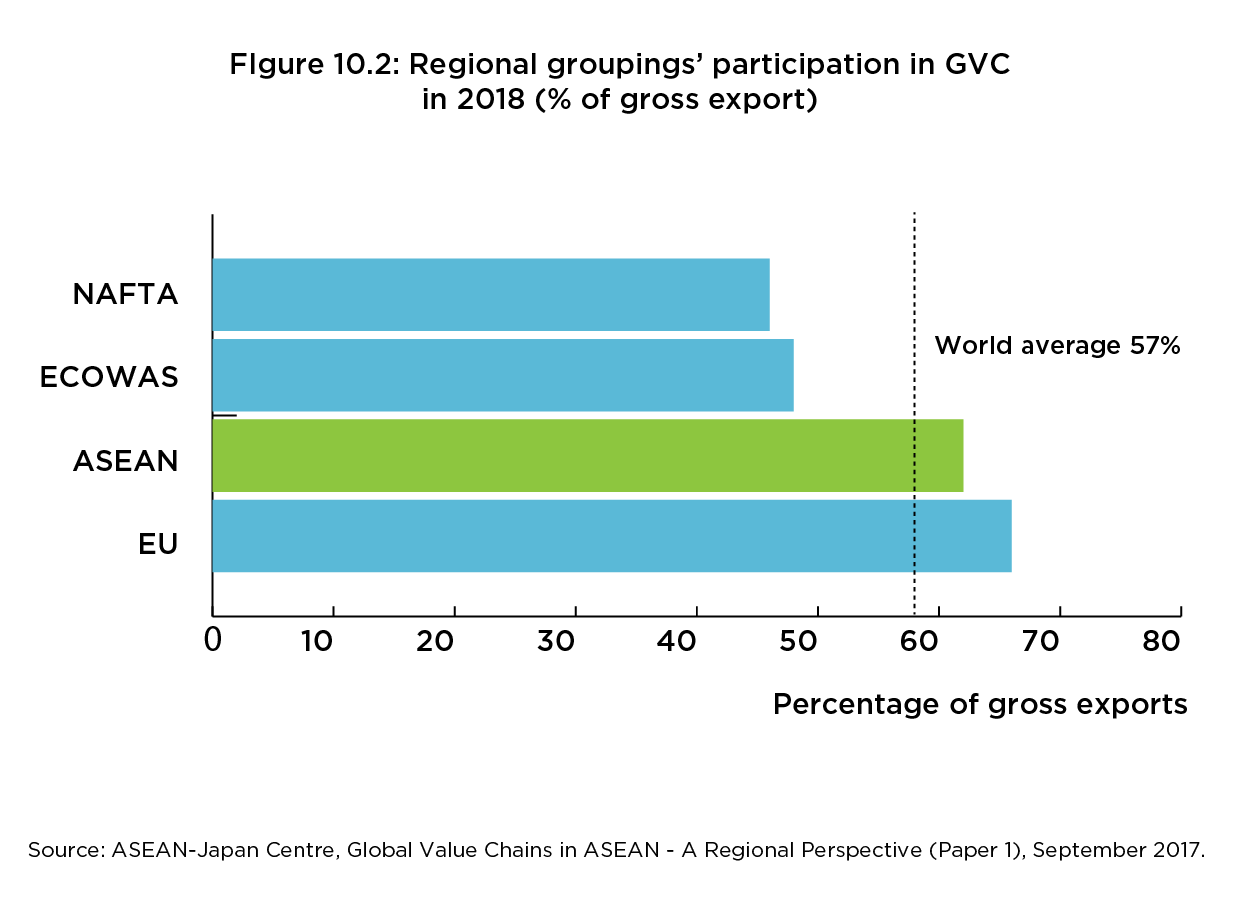 ASEAN’s increasing embeddedness in GVCs is consistent with some of the observations indicated in previous sections.

a. Sharp fall in tariff rates

A key tool to enhance intra-ASEAN trade under ASEAN Free Trade Area’s (AFTA’s) Agreement on the Common Effective Preferential Tariff (CEPT) and later the ASEAN Trade In Goods Agreement (ATIGA), has been the lowering of tariffs for goods originating from an ASEAN member country going into another. There has been good progress in this regard.

b. Increase in merchandise trade value but not relative importance 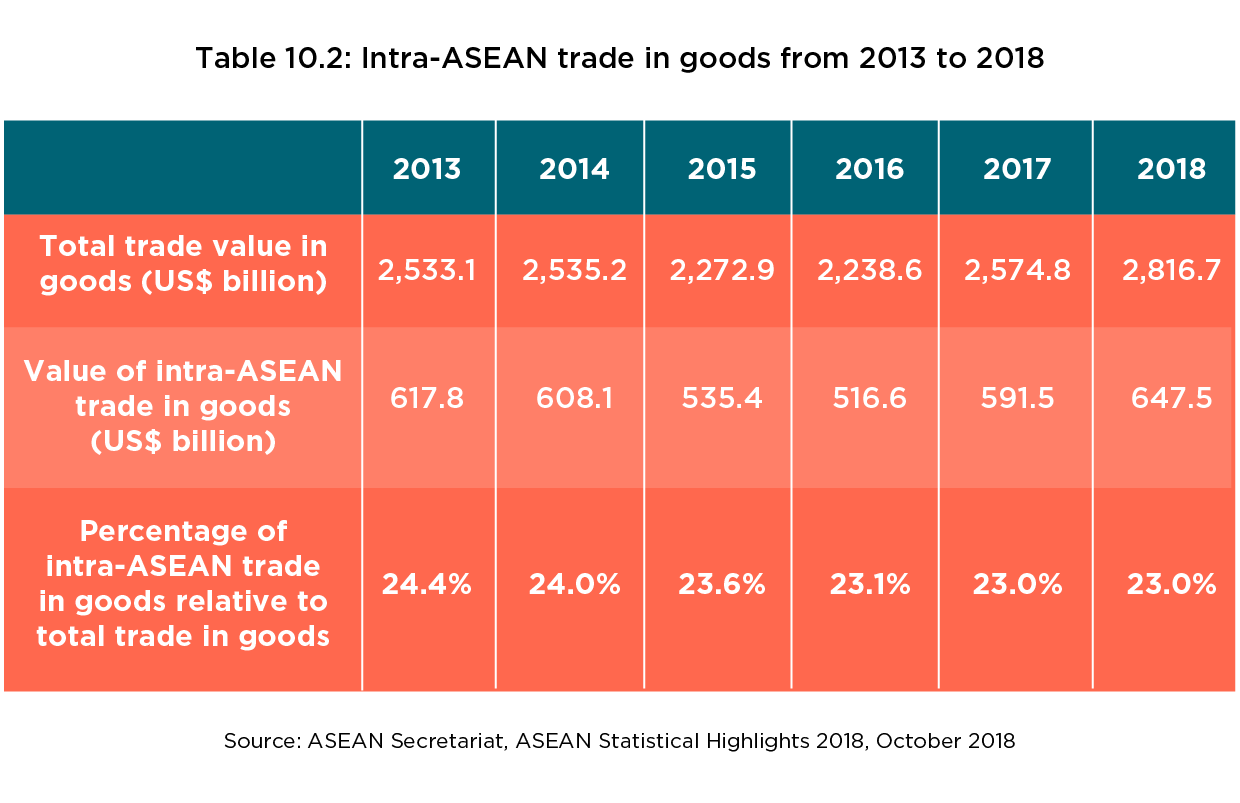 Analysts have suggested that among others, the proliferation of non-tariff measures (NTMs), which include a mix of import-related and export-related policies, could account for these intra-ASEAN trade patterns.

While we recognise that NTMs are not synonymous with non-tariff barriers—and hence, only provides an indicative perspective—what is generally observed and agreed upon, is that significant reduction in these measures could be instrumental in enhancing regional trade by way of reducing trade costs. Tackling SPS measures for instance, would include addressing norms related to discriminatory treatment of certain products, discrepancies in standards across markets and the lack of transparency in assessment procedures.

a. Much room for services trade to grow 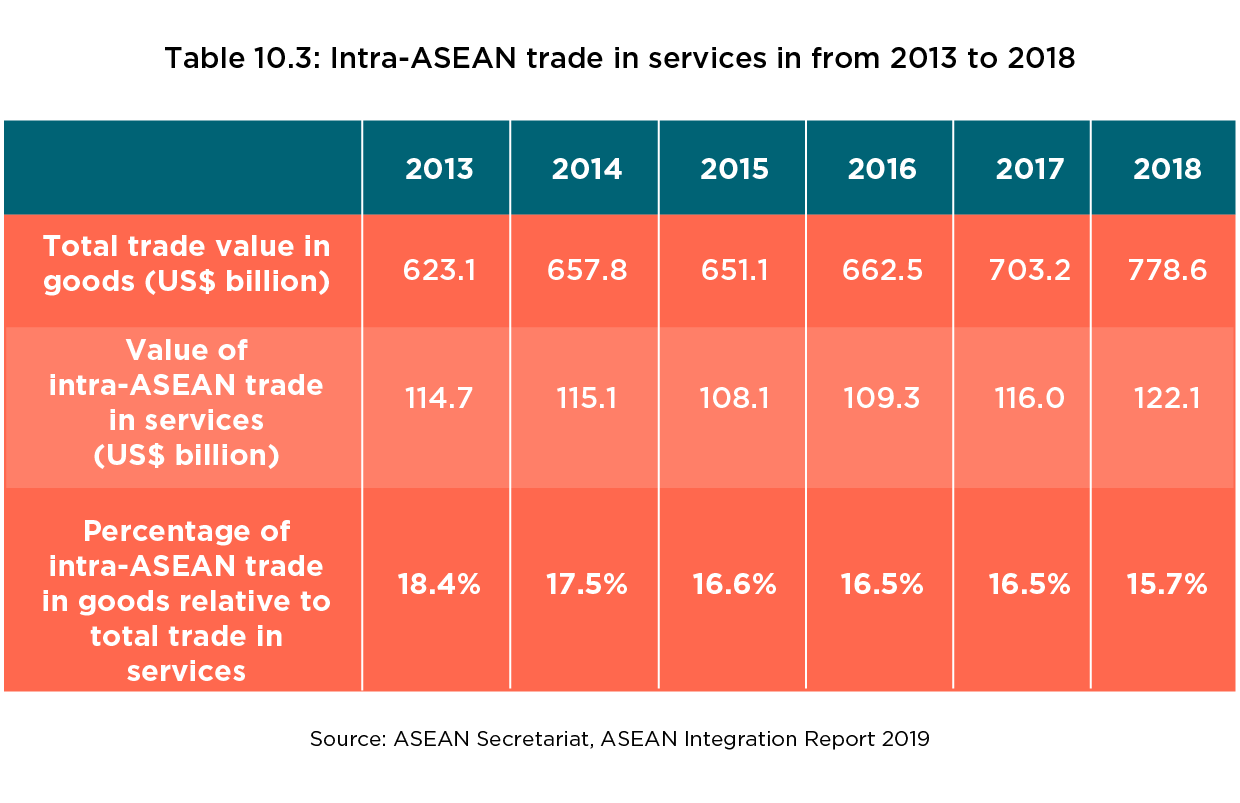 b. Role of services trade impediments

ASEAN governments have undertaken several measures to support regional trade in services as reflected in the initiatives related to the ASEAN Framework Agreement on Services (AFAS) and the ASEAN Trade in Services Agreement (ATISA). However, further relaxation of services trade restrictions is clearly required.

The OECD FDI Regulatory Restrictiveness Index provides insight into the extent of country-level FDI restrictiveness although there were data gaps for certain countries in the year 2003.17 Data shows that FDI regulatory restrictiveness has generally decreased across the board from 2003 to 2017, especially for Vietnam and Malaysia which experienced more than 45% decrease in restrictiveness (Table 11.1). 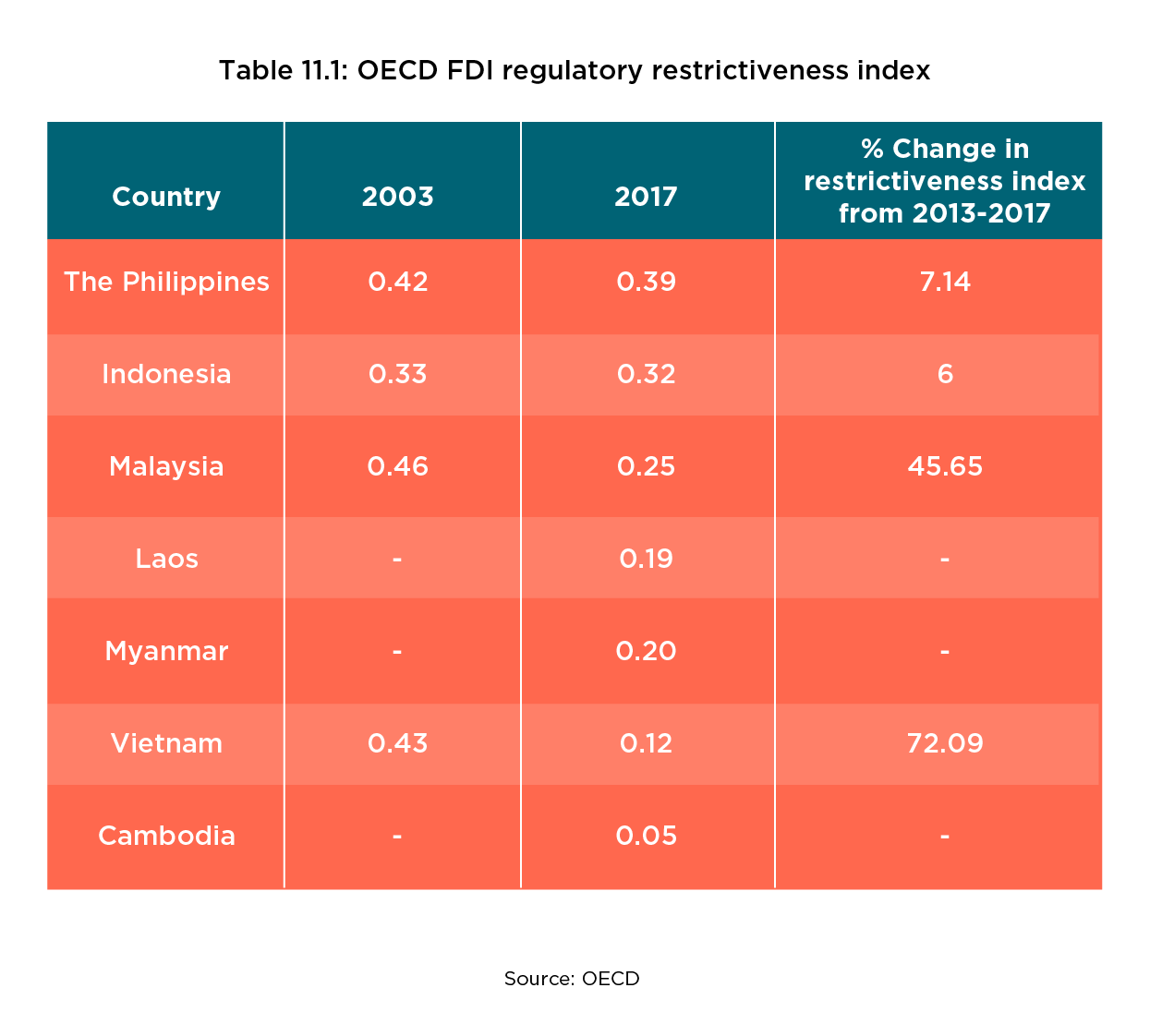 Although the slight decrease in the Philippines’ score to 0.39 and Indonesia’s score to 0.32 in 2017 (Table 11.1) is a welcome development, the data nonetheless suggests that relative to other countries and regions, the average ASEAN FDI regulatory restrictiveness level of the seven ASEAN countries in 2017 (Table 11.1) is 0.20 which is higher compared to the average FDI restrictiveness for non-OECD countries (0.12)18 and OECD countries (0.07) in the same year.

Consistent with this development, the value of intra-regional FDI increased by around 200% from 2008 to 2017.19 Since the 2008 Global Financial Crisis, intra-ASEAN FDI reached more than US$15 billion annually.20 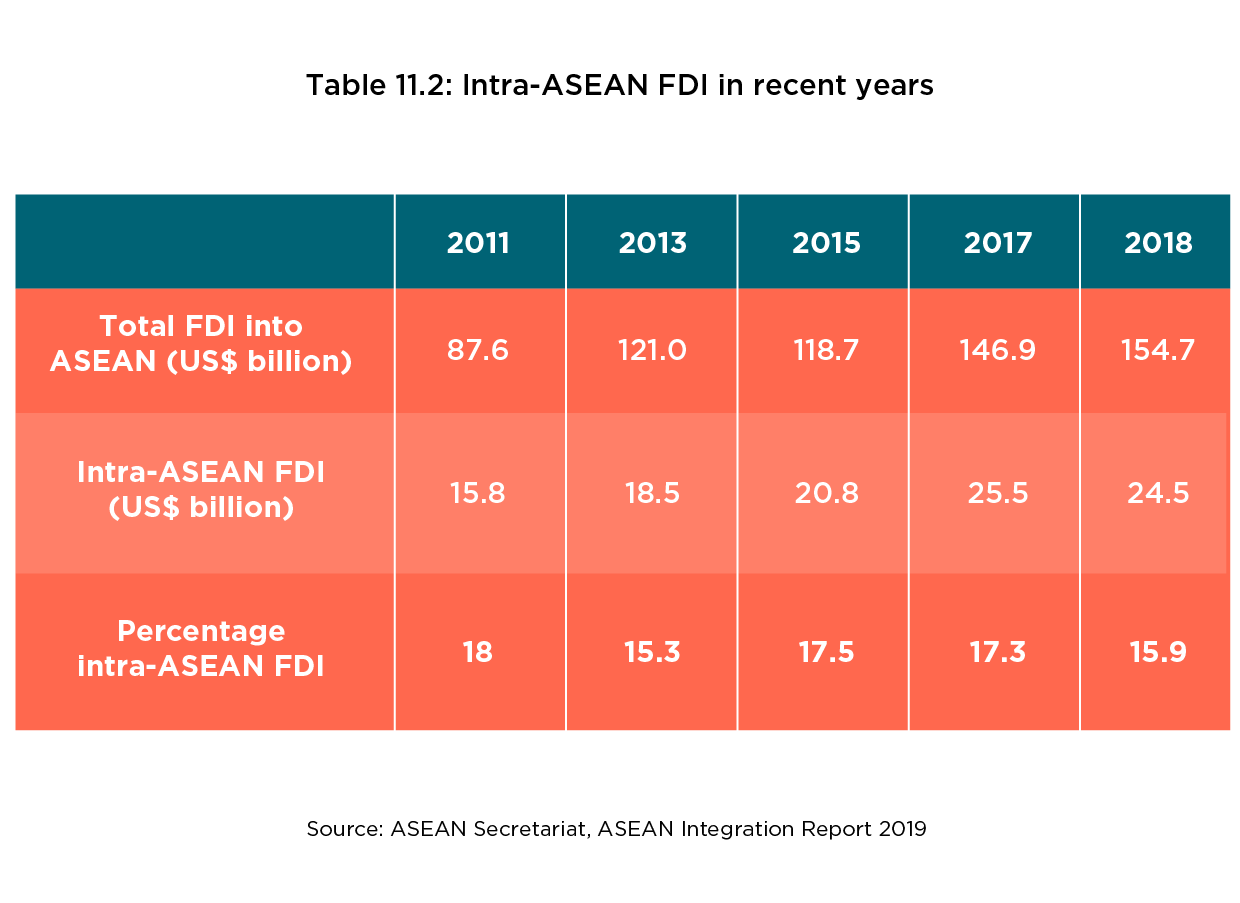 The proportion of the intra-ASEAN component, however, has generally been unchanged, hovering between 15%-20% of total FDI inflows27< between 2010 and 2018.28<

It remains to be seen if intra-ASEAN FDI can continue to grow to match the proportions observed in other active regional economic groupings. For instance, intra-EU FDI has exceeded extra-EU FDI flows for most of the EU’s investment history.29<

Despite progress in ASEAN economic cooperation since the creation of the ASEAN Free Trade Area (AFTA) 27 years ago, the relative share of intra-ASEAN trade and FDI flows appear to have not increased in the past decade. Around a quarter of merchandise trade comes from intra-regional merchandise trade and this proportion has been fairly unchanged in 2017 and 2018. While the value of intra-regional FDI inflows has grown significantly, the proportion has remained generally unchanged at less than 20%.30

The preceding overview of economic progress in ASEAN countries has raised some key points:31

Having very high external dependencies is not necessarily a red flag in a globalised world. Nonetheless, ASEAN needs to be cautious; for example, around 77% of merchandise trade is with extra-regional markets, many of which show high economic correlations with each other. The grave uncertainties around the strategic and economic outcomes arising from the unresolved US-China trade conflict is just one example of this vulnerability.

The test of true resilience, however, does not just derive from ASEAN’s capacity to successfully mount counter-cyclical strategies to withstand economic risks. Longer-term resilience must also effectively ride the vagaries of, as indicated previously, geopolitical dynamics, protectionist-related threats and inter-generational changes brought on by demographic trends and disruptive technologies.

Now more than ever, the region requires ASEAN economic integration to more aggressively deliver on the promise of a single market and production base, and the seamless connectivity of people, capital, goods and services.

The comprehensiveness of the AEC Blueprint/Consolidated Strategic Action Plan (CSAP) 2025 reflects that ASEAN governments recognise that collaborative efforts are required to support domestic capacity-building of respective countries and to strengthen ASEAN’s collective market potential. Through the wide partnerships of private and public sector stakeholders, the AEC Blueprint/CSAP 2025 tackles “sensitive” areas of reform in a more proactive manner—including more purposefully reducing non-tariff measures, simplifying rules of origin, deepening trade facilitation measures, and harmonising standards and regulations—all of which would address some of the challenges highlighted previously.

In order to support the implementation of the AEC 2025, the ASEAN Integration Monitoring Office (AIMO) has formulated a Monitoring and Evaluation Framework that aims to monitor both the outcomes of integration and planned activities in the CSAP. The important work of tracking progress must be supported by all relevant stakeholders in the region. Only then can the multi-sectoral commitment to embark on integration efforts be infused with the necessary momentum. In short, all of ASEAN needs to help fortify the AEC Blueprint/CSAP 2025 with both the commitment and necessary due diligence to ensure that a balance is achieved between an ASEAN-centric development approach with the continued efforts to pursue the necessary extra-regional economic partnerships that have served it well so far.