ASEAN was formed in 1967 with five members namely Indonesia, Malaysia, the Philippines, Singapore, and Thailand with a combined GDP of US$23 billion. In 2016, ASEAN’s GDP was estimated to be US$2.6 trillion, making the region the sixth largest economy in the world if ASEAN was a country. In half a century, ASEAN’s membership has doubled, total population has increased by 3.5 times, while its GDP has expanded by 120-fold.1

The diversity of the region’s economies is best captured by the difference in their GDP levels. The three largest ASEAN economies of Indonesia, Thailand and Malaysia collectively made up more than 64% of the region’s total GDP in 2018 (Figure 1.1). 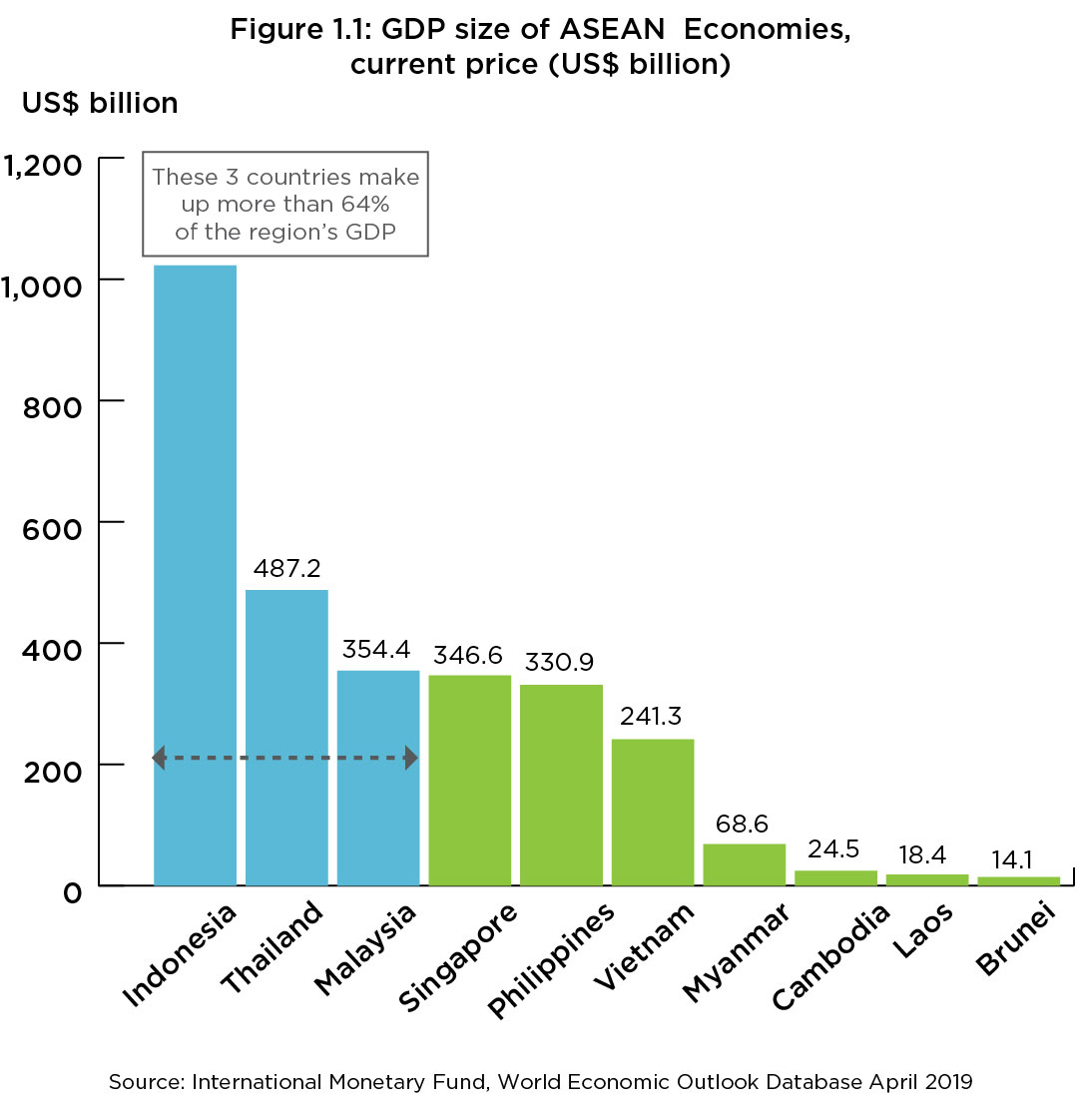 However, Singapore and Brunei rank the highest when it comes to the region’s GDP per capita as the countries lead the group by 5 and 3 times the regional average respectively in 2018 (Figure 1.2). 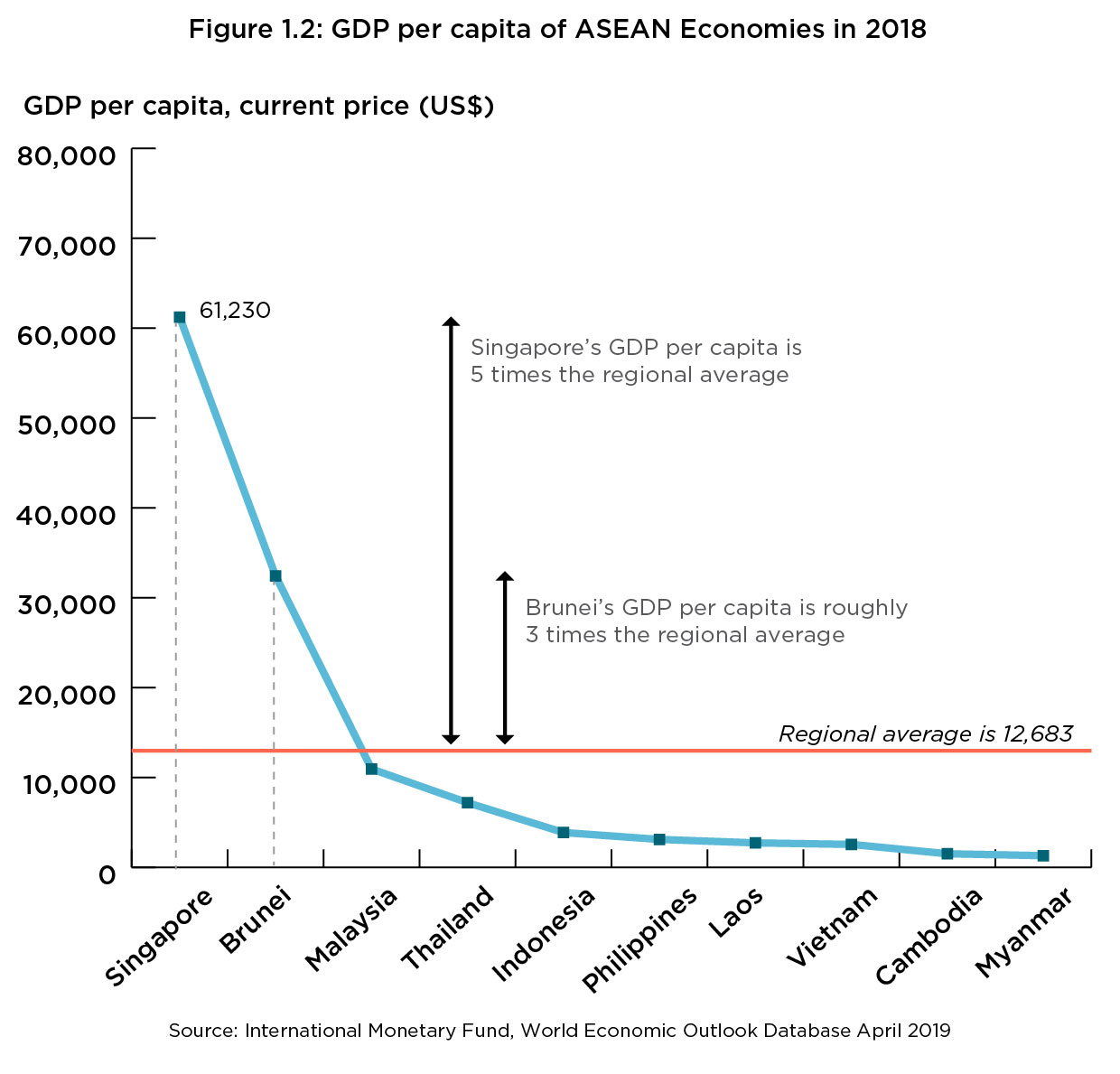 Although CLMV economies have among the lowest GDP per capita in ASEAN, these countries are also the fastest growing, with an average GDP growth rate of 5.8% in 2018 compared to 3.8% for the ASEAN-6 economies (Figure 1.3).4 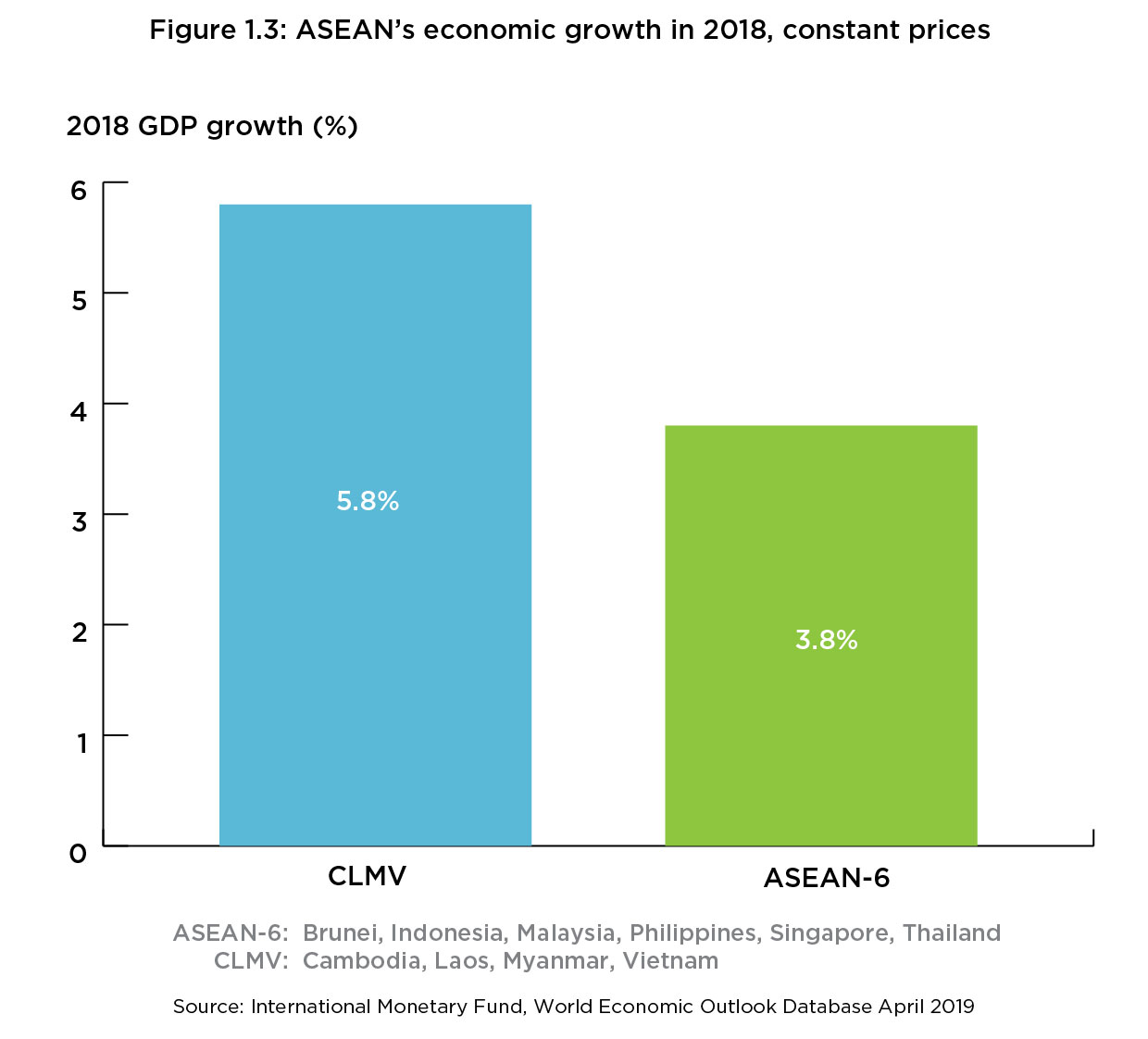 Sufficient resources and an efficient capital transformation machinery gave rise to a large labour force in ASEAN which further propelled the region’s growth. In the span of 20 years (from 1995 to 2015), ASEAN’s labour force grew from 224 million to 326 million, a staggering rate of close to 46%, in part due to the inclusion of the CLMV (Cambodia, Laos, Myanmar and Vietnam) countries5 (Figure 2.1). 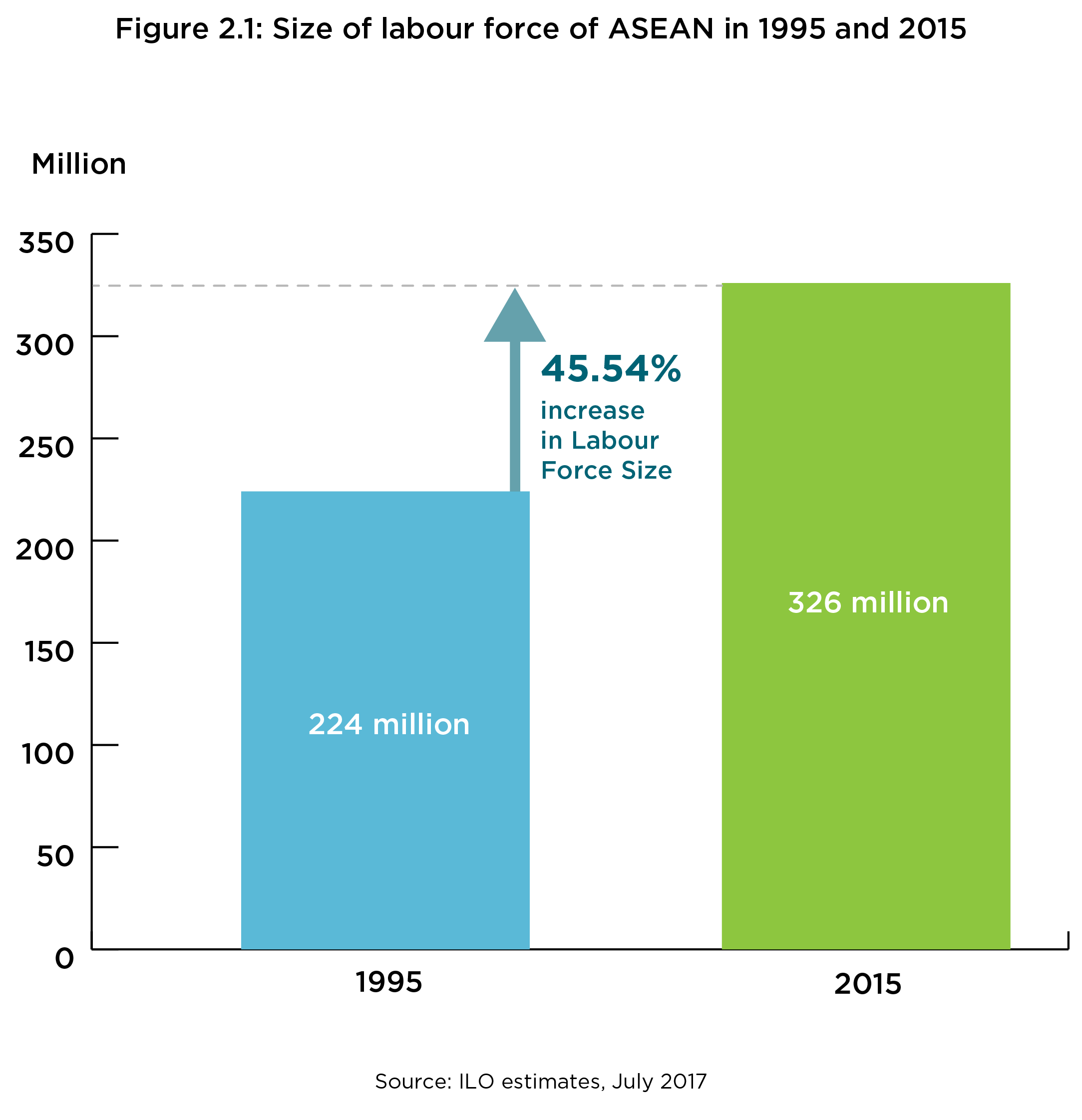 According to projections, ASEAN’s labour market is expected to expand considerably, i.e., become the third largest labour force worldwide behind China and India by 2030.6 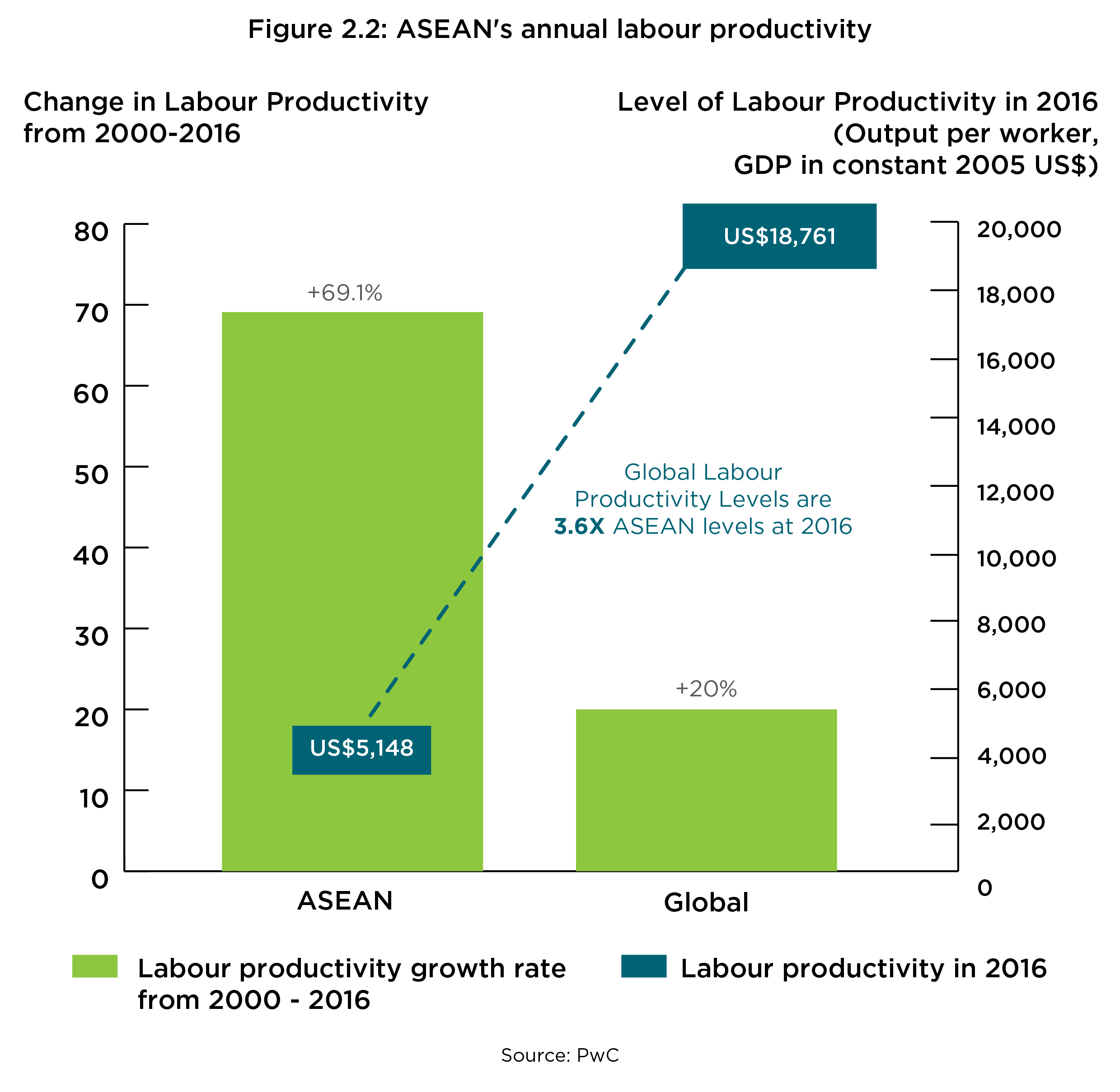 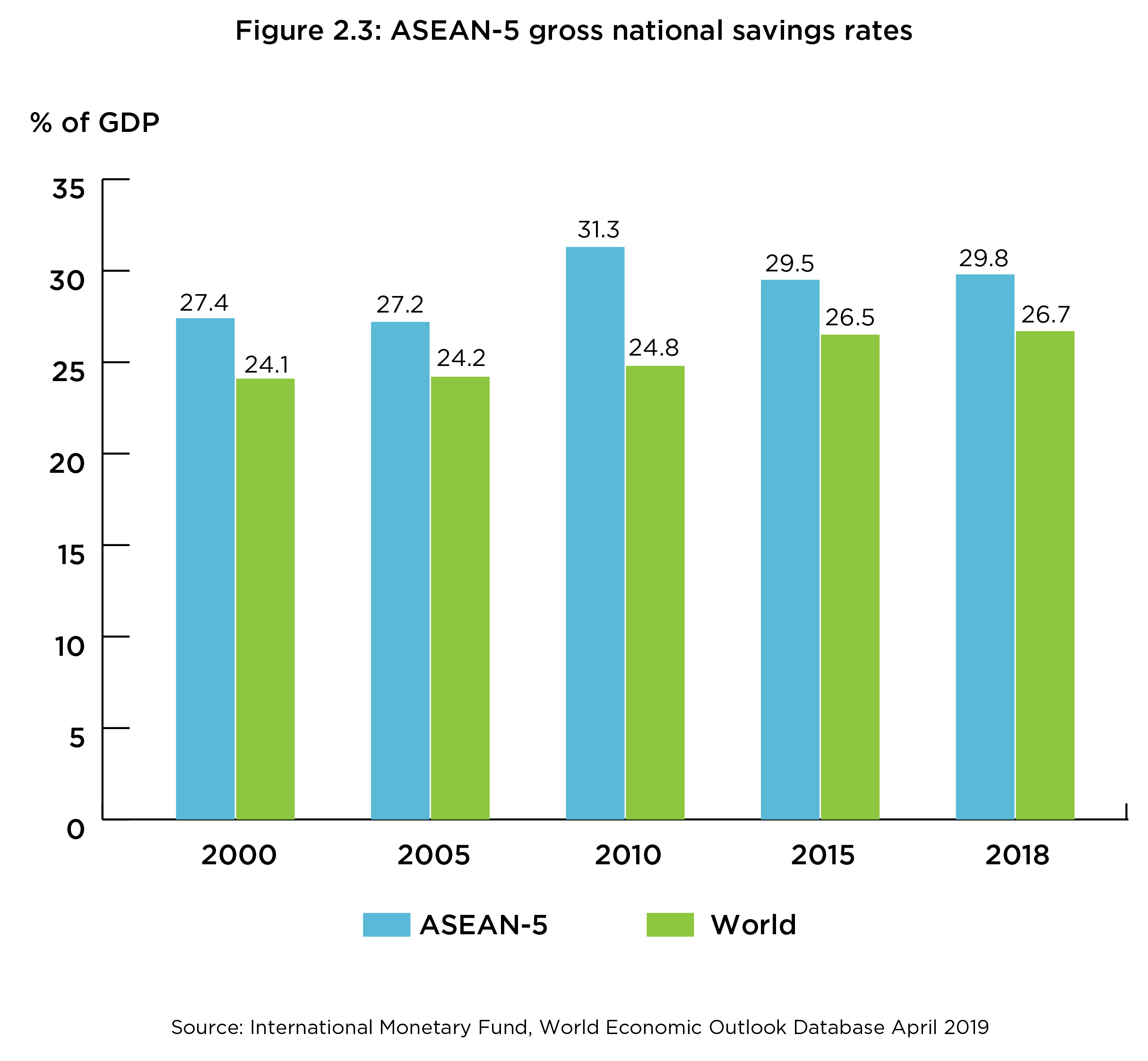 At a national level, as a percentage of GDP, Singapore saved 51% between 2000 to 2015, with equally impressive rates for Malaysia (40%), Indonesia (32%), and Thailand (30%) in the same period (Figure 2.4). According to McKinsey Global Institute, even as far back as during the late 1990s, Malaysia’s Employees Provident Fund accounted for 8% of domestic disposable income, while Singapore’s Central Provident Fund accounted for 15% respectively. 9 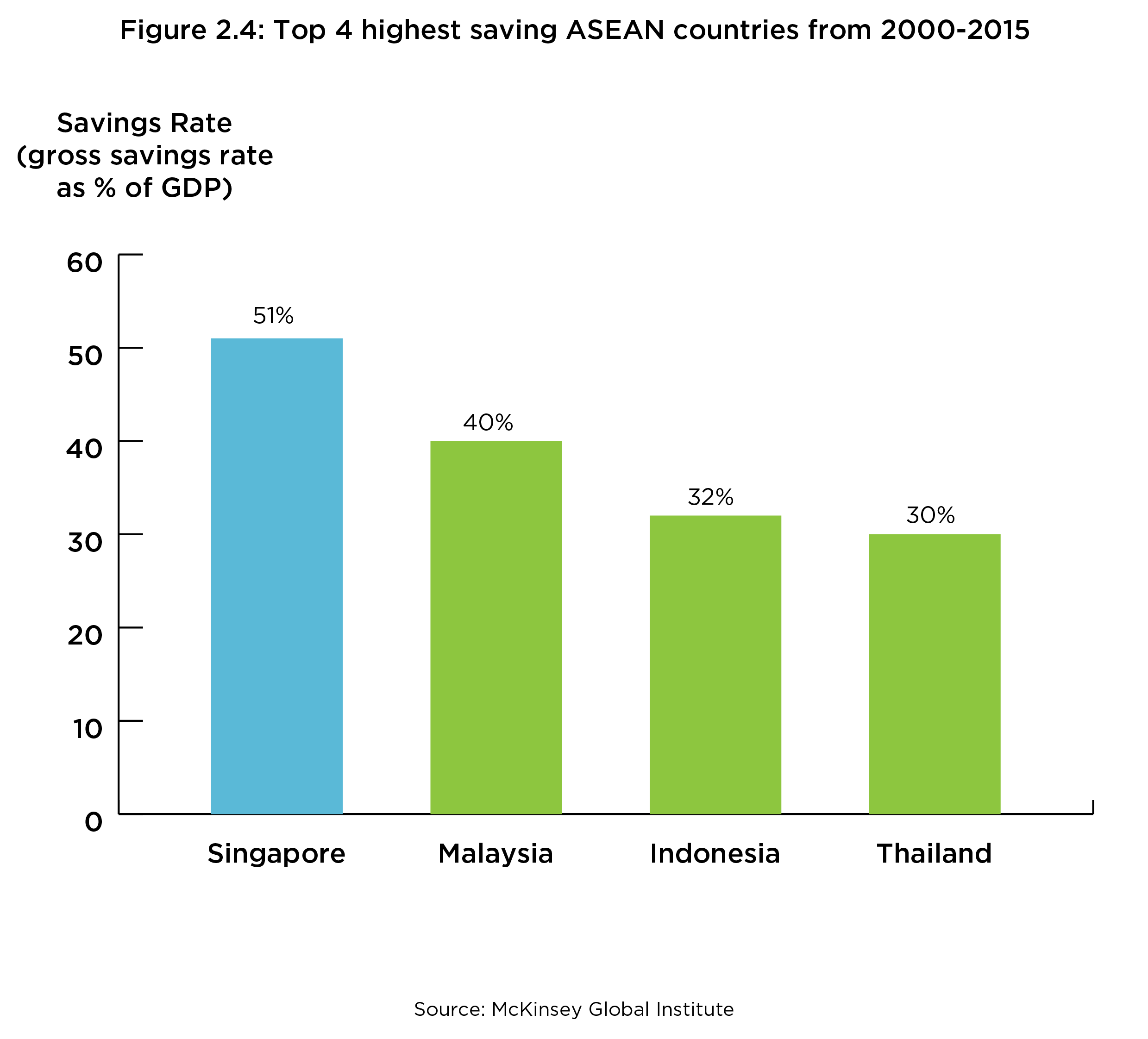 Some aspects of the macroeconomic environment have also been especially supportive for the ASEAN-5 countries in the post-1997 Asian Financial Crisis era10. 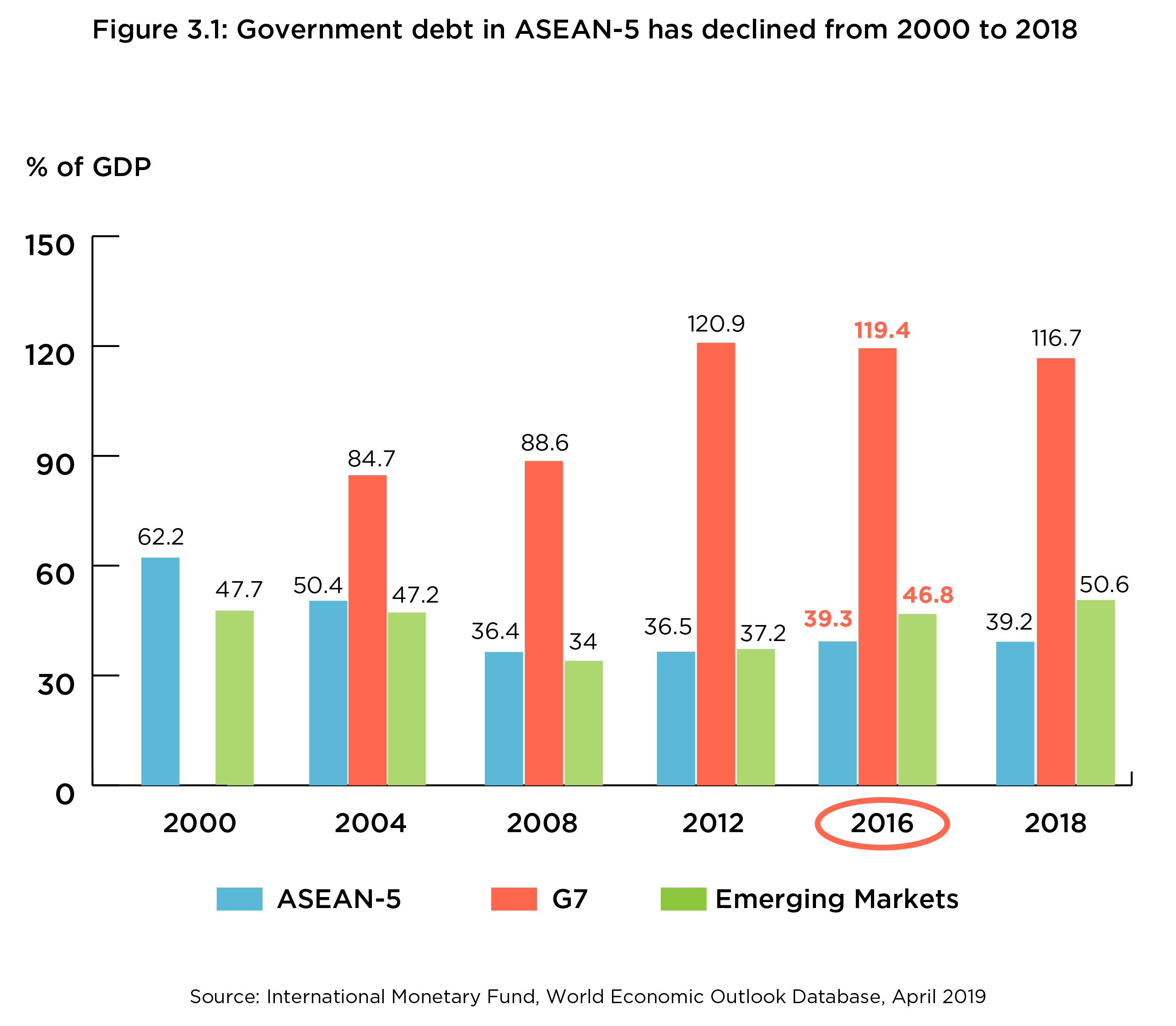 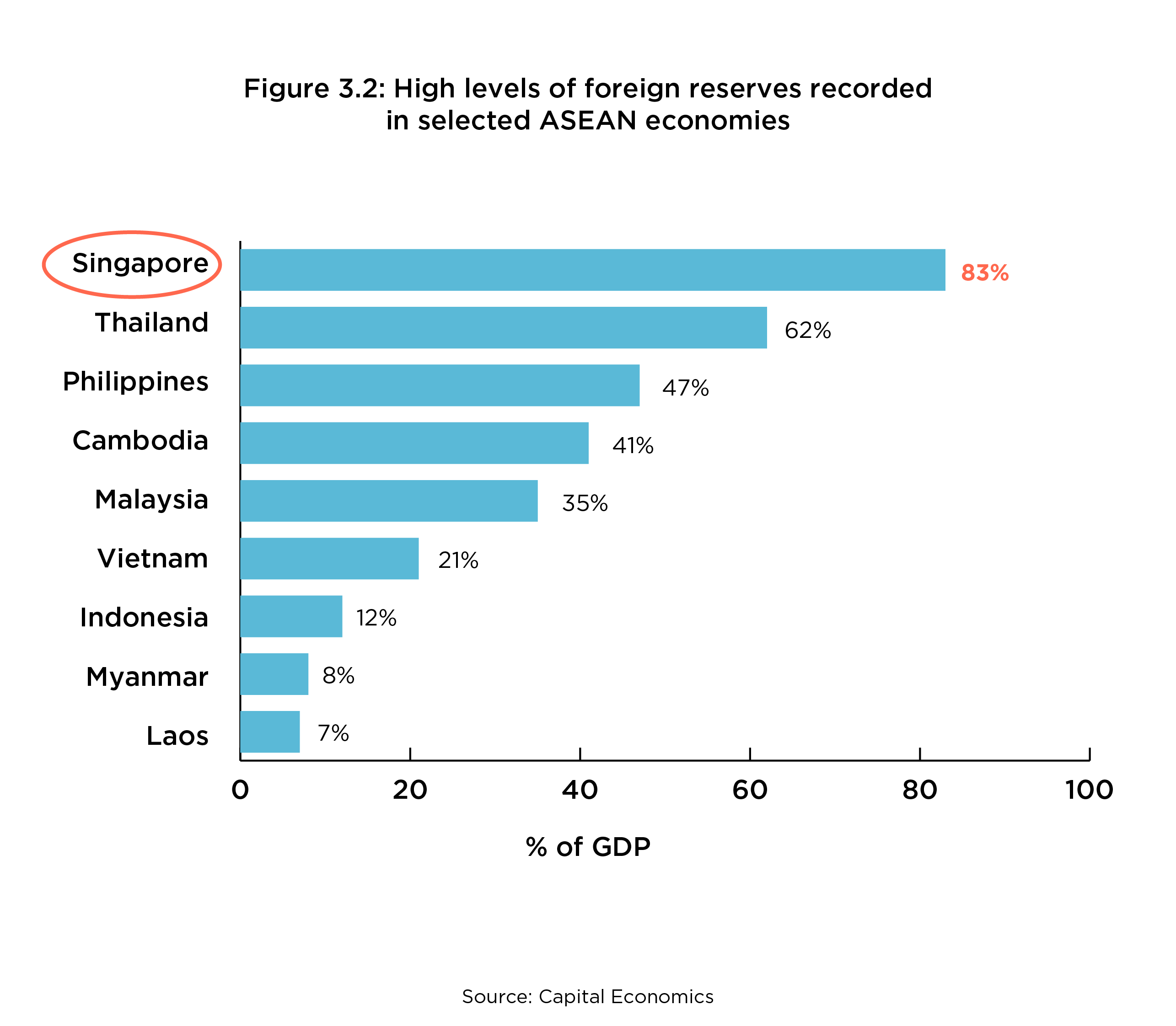 In comparison to Thailand that had healthy foreign reserves at 62% compared to GDP, Indonesia, with a much lower foreign reserves of 12% against GDP, showed stronger growth with Indonesia managing to catch up with Thailand’s 18% growth between 2014 and 2017 (Figure 3.3). 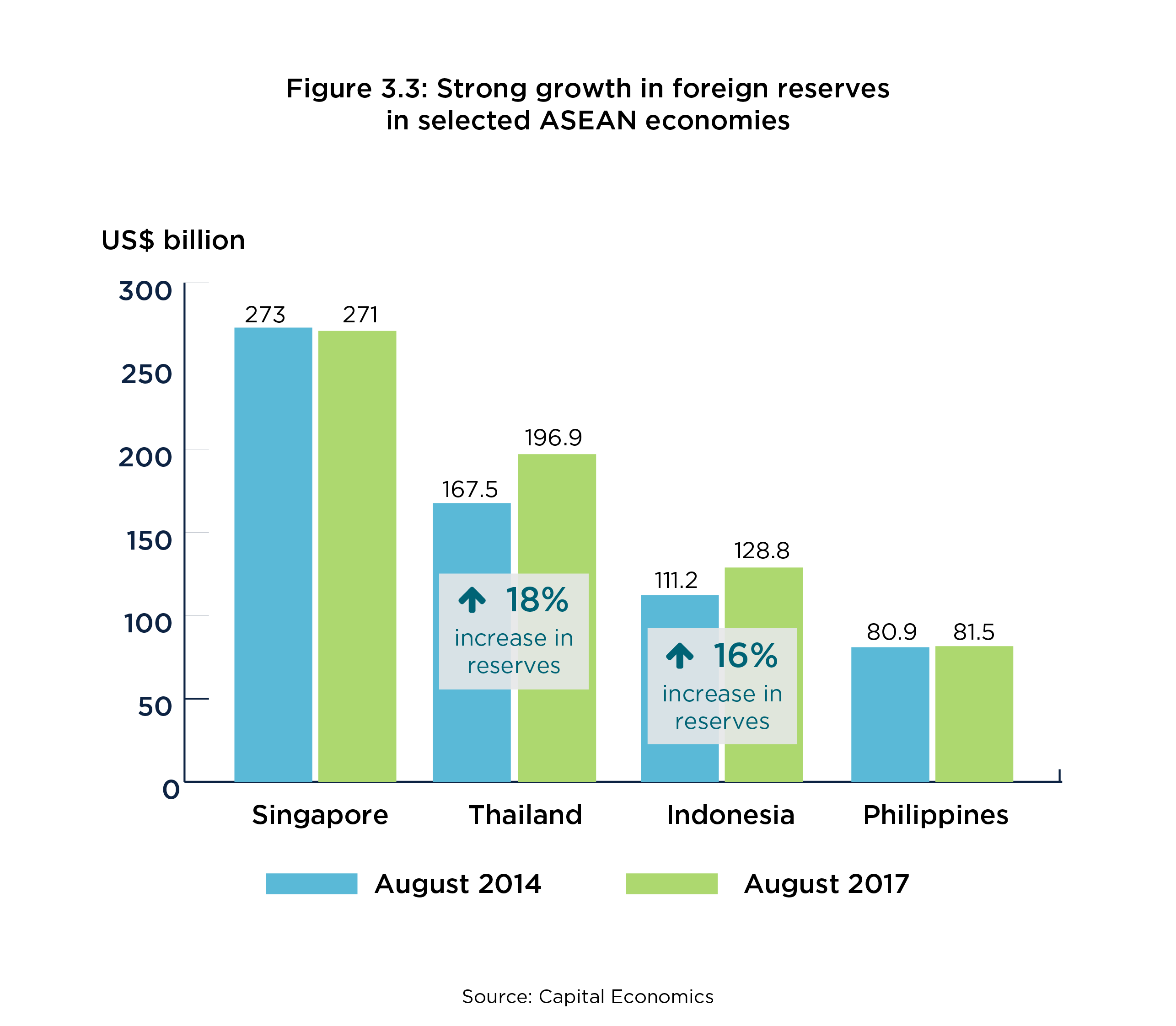 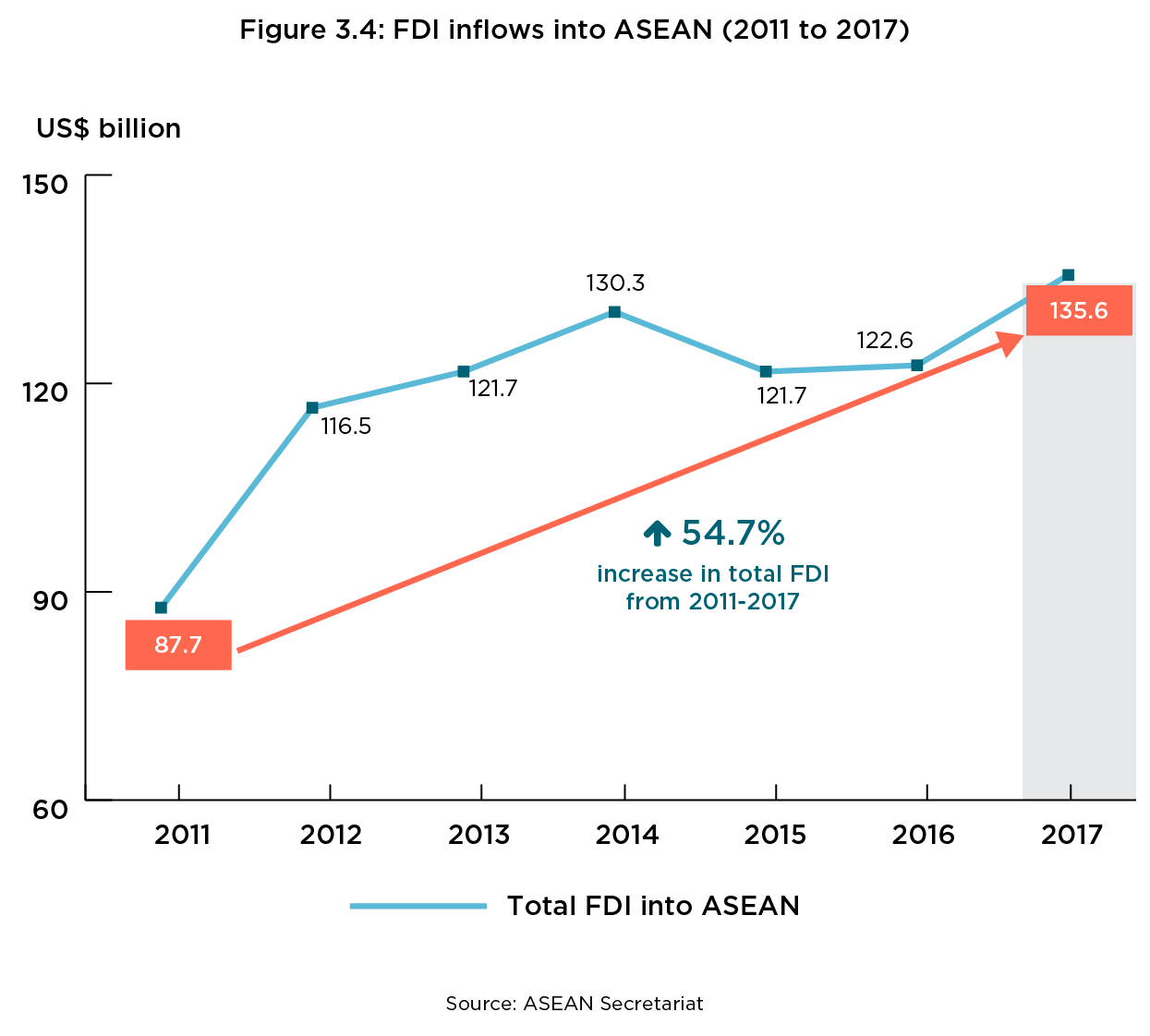 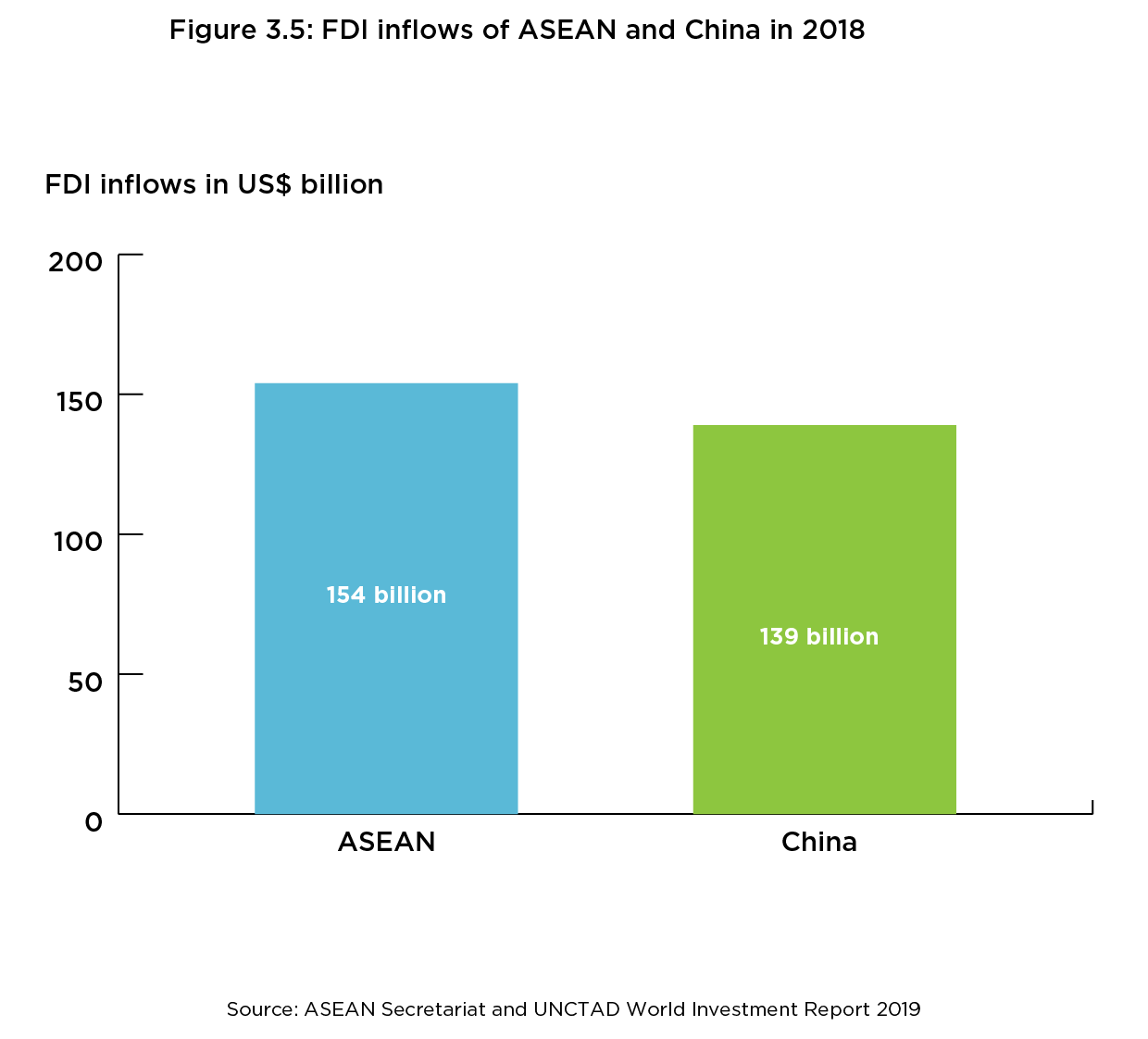 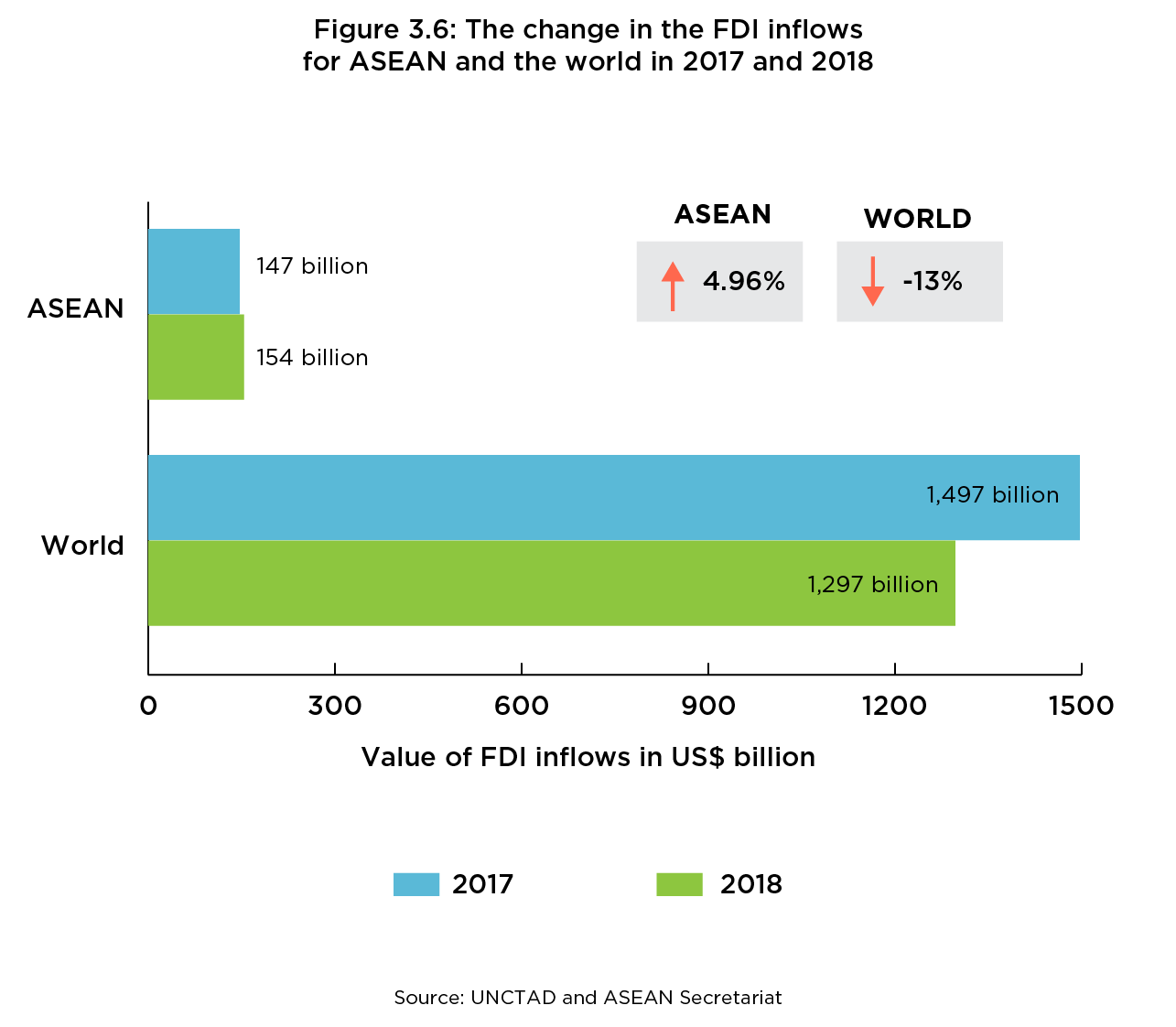 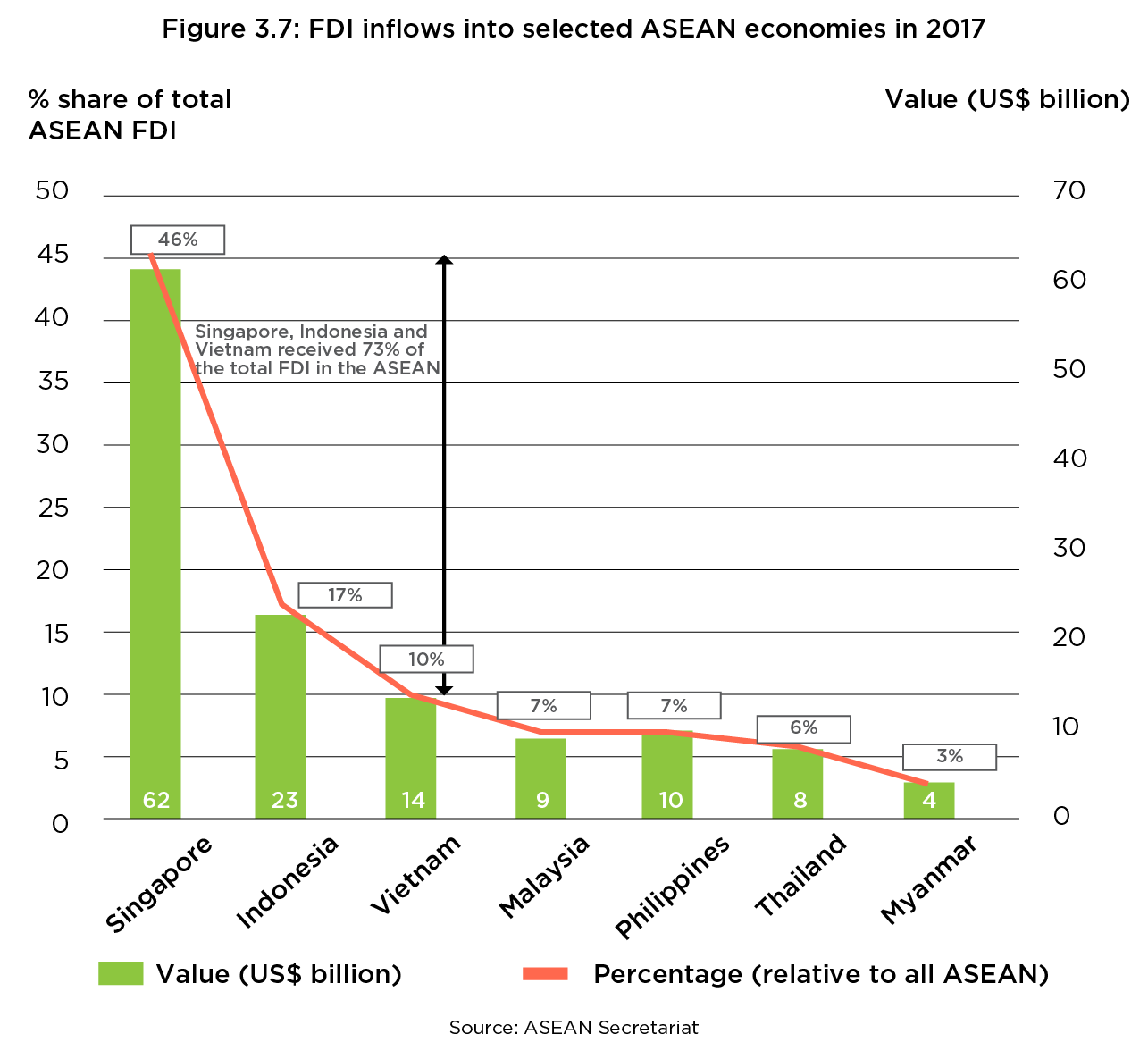 A virtuous cycle of savings, foreign investment and labour productivity have helped feed the domestic mechanisms that supported the growth of many ASEAN economies. Macroeconomic conditions such as healthy levels of government debt and high foreign reserve levels have also been supportive. These conditions have provided a fertile platform for the region to attract global FDI. Nonetheless, as the next section shows, accompanying such growth momentum are emerging vulnerabilities that would need to be addressed to sustain further growth.