The previous section explored the supportive conditions that have driven regional economic growth. Accompanying such momentum are structural vulnerabilities which are explored in this section.

This part explores the first three out of five vulnerabilities that could curtail ASEAN’s future growth:

Regional productivity to catch up with global standards

As ASEAN advances to be an international market force, the reality of needing to face global competitive pressures is being increasingly felt. Using the US’s productivity level in 2016 as the basis for comparison, we find that ASEAN’s productivity levels still very much lagged that of the US. 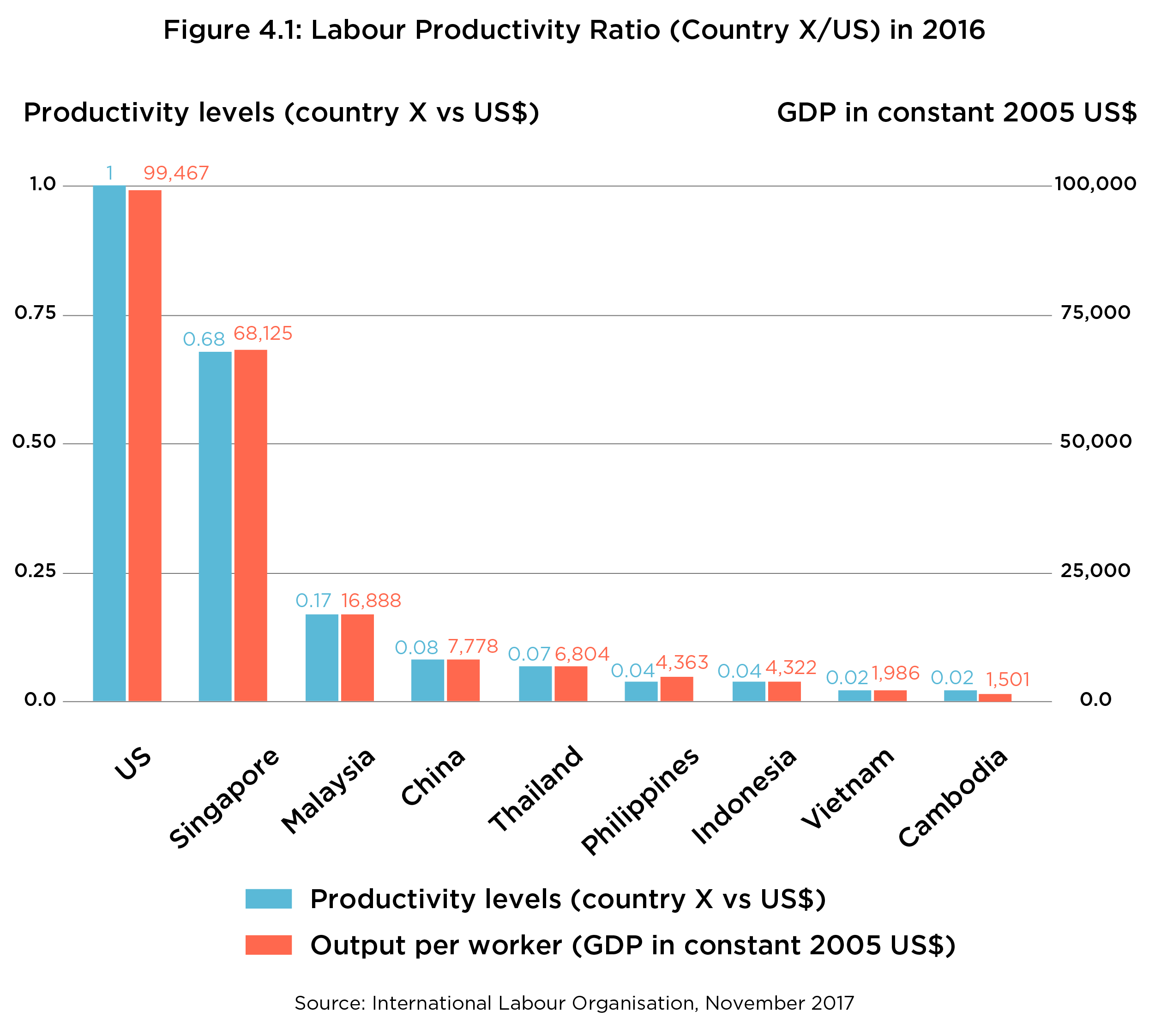 While ASEAN’s labour productivity growth rates have exceeded global rates (as indicated in the previous section on “Drivers” (Parts 2 and 3)), the pace of this growth has varied between different selected ASEAN countries between 2015 and 2018 (Figure 4.2).

Low productivity and inconsistent labour productivity growth should be treated with caution as low productivity may impact profit and investment for businesses; wages for workers; and tax revenues for governments.2 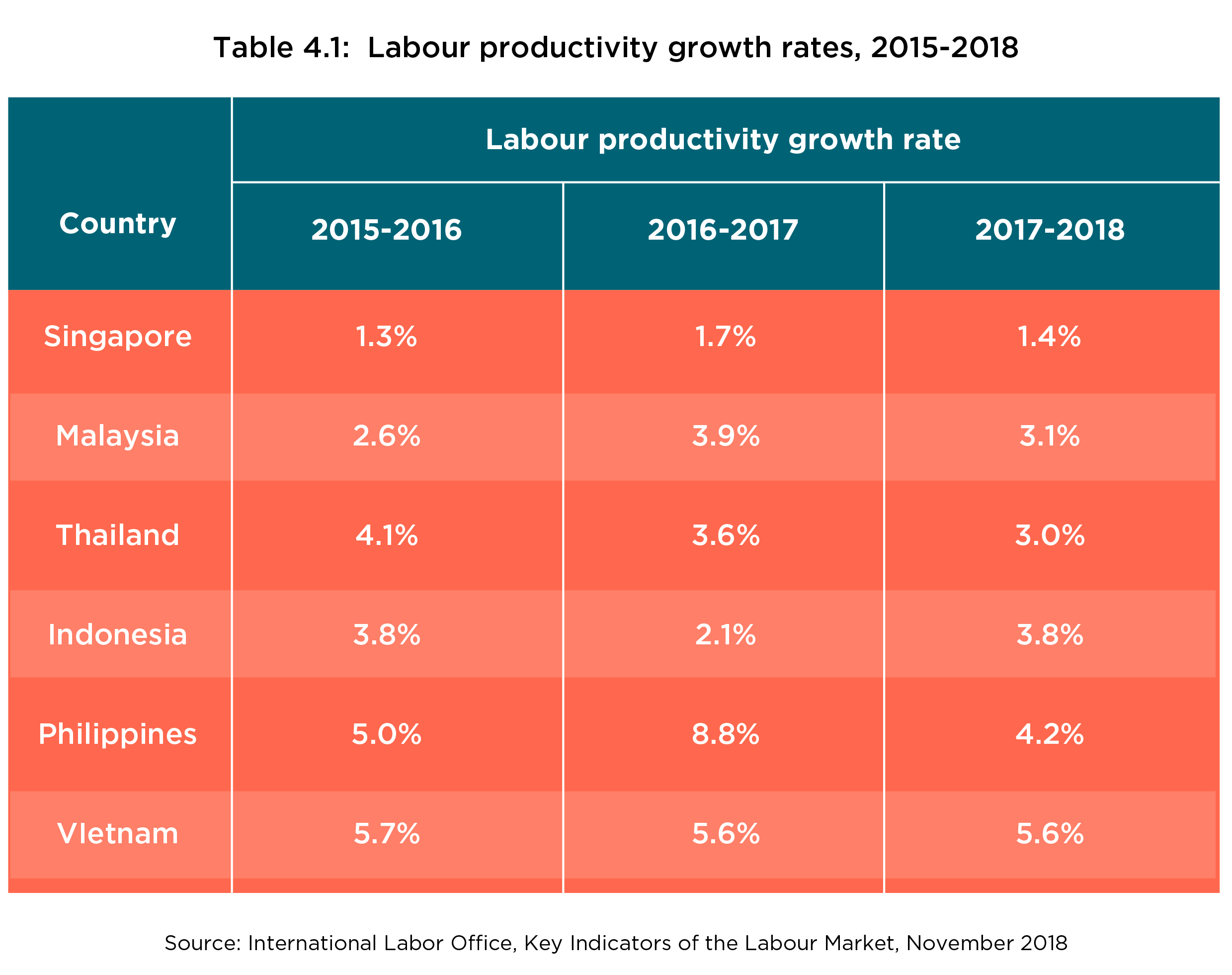 Demographic trends will further exert downward pressure on labour productivity. The percentage of the population over the age of 65 in ASEAN is expected to more than triple by 2050, with corresponding declines in the working age population.

Demographic impacts may be felt more strongly in Thailand as its productivity level is only about one-tenth that of Singapore. Its population of 65 or above has been forecasted to approach 30% by 2030, close to that of high-income nations. Meanwhile, Thailand’s GDP per capita reaches only about 15% of these same high-income countries.5 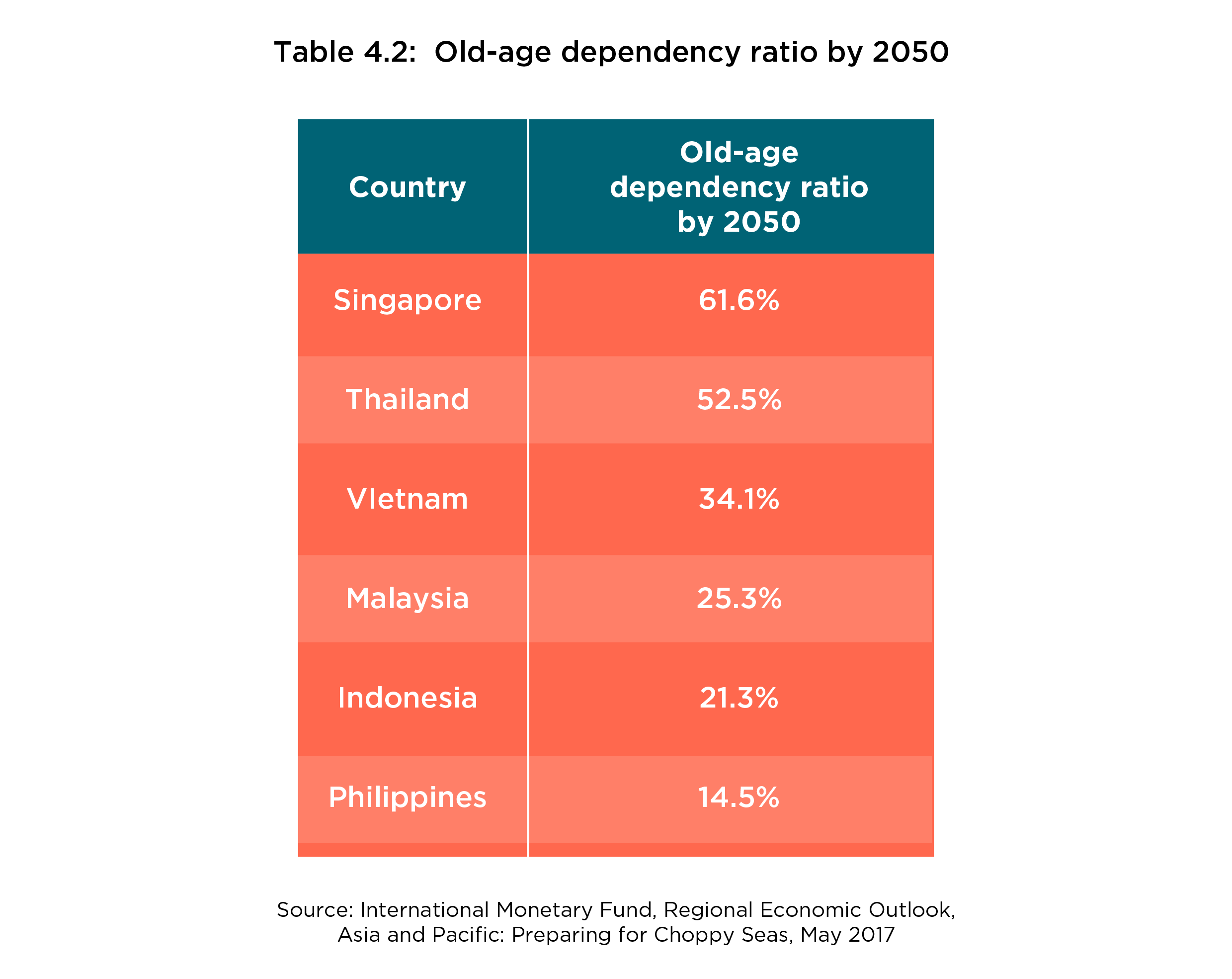 Apart from the significant productivity level variance between much of ASEAN and developed economies and concerns over declining productivity growth rates, rising remuneration is another source of concern. While higher minimum wages can boost the purchasing power of consumers, pay increases that outpace economic and price growth can have a detrimental effect on the earnings of businesses, thereby making foreign investors less inclined to invest. 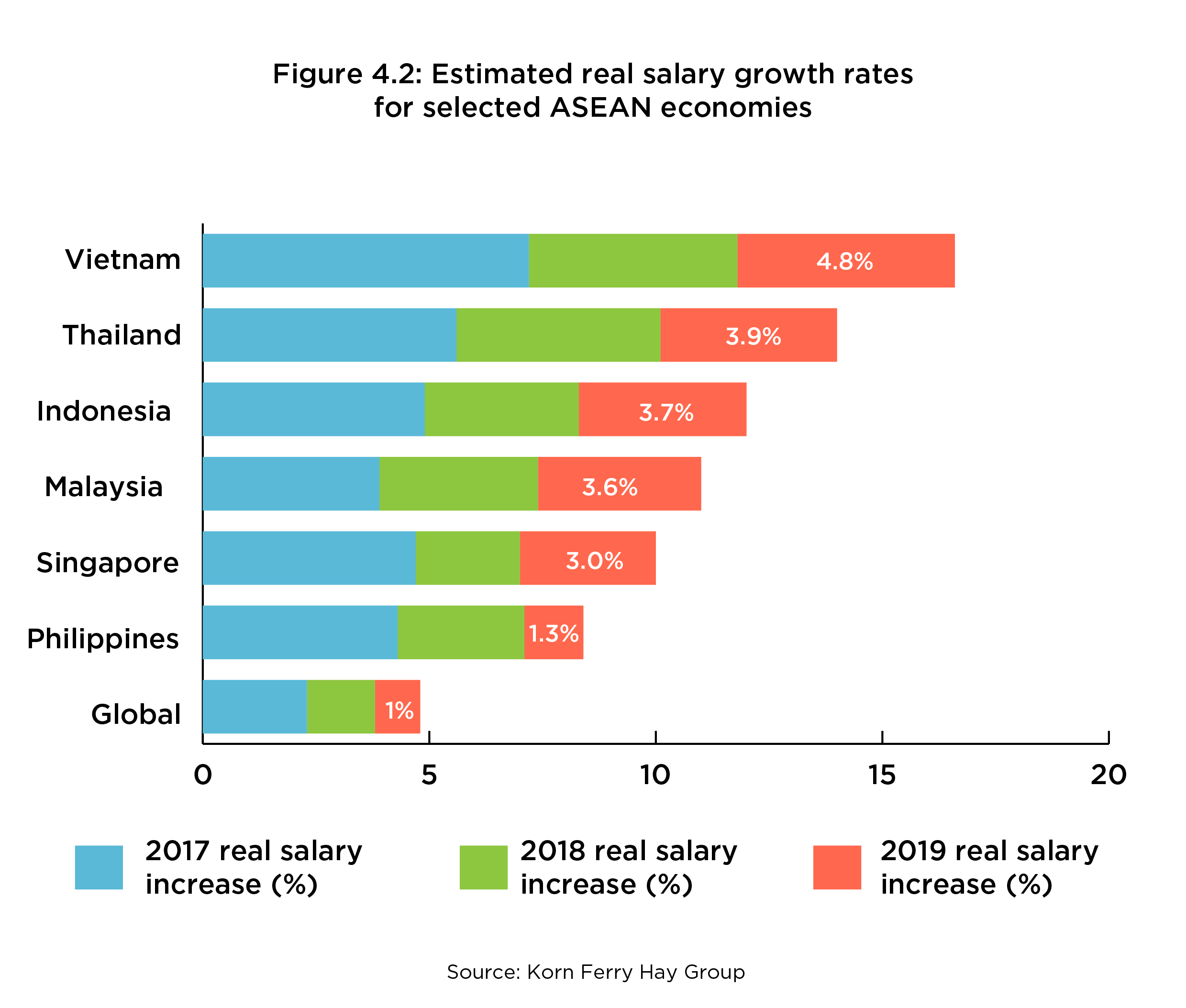 Minimum wages in Southeast Asia have also grown sharply due to rising costs of living and to boost domestic consumption. Governments have also been reportedly implementing minimum wage hikes to build up public support. 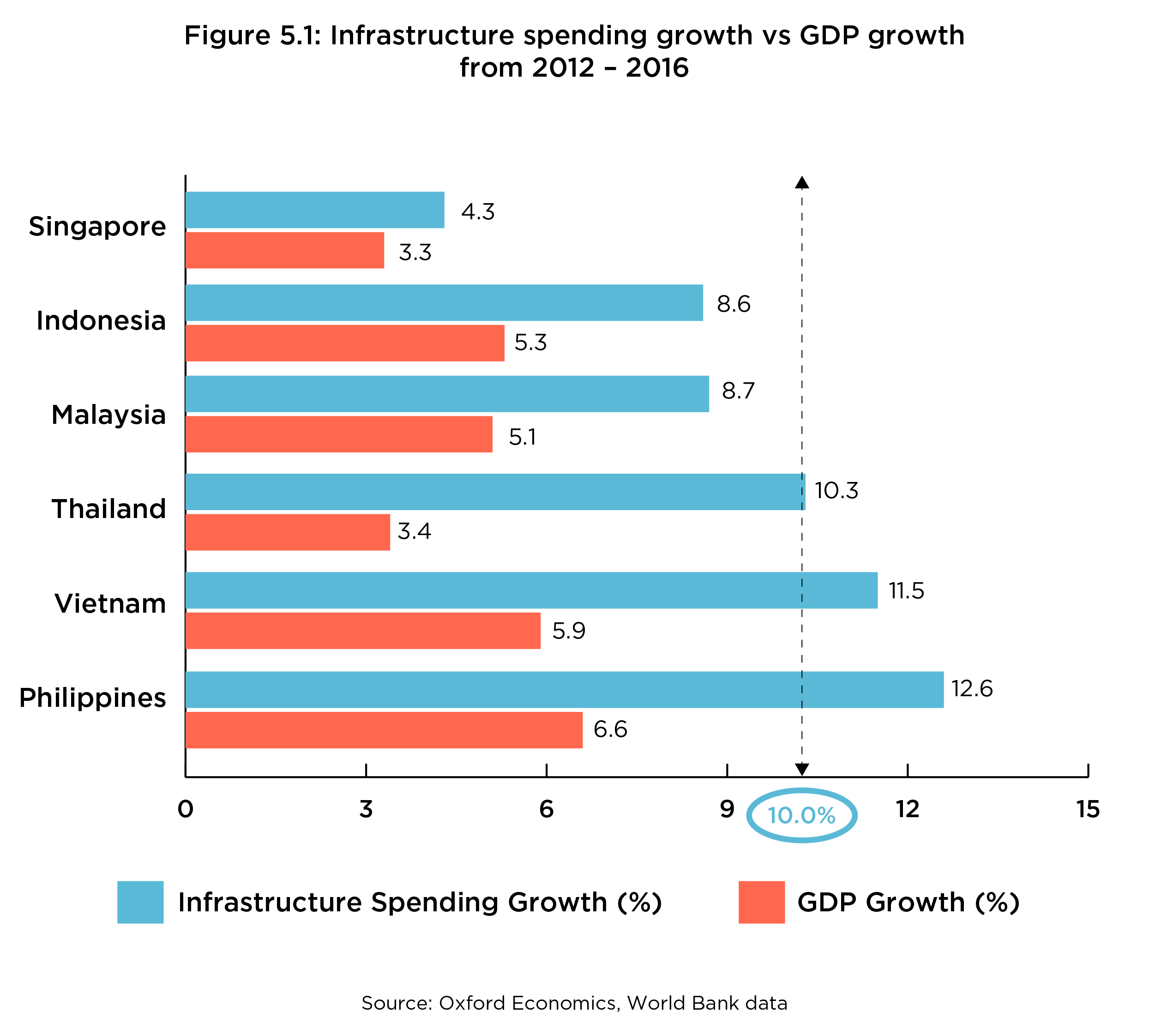 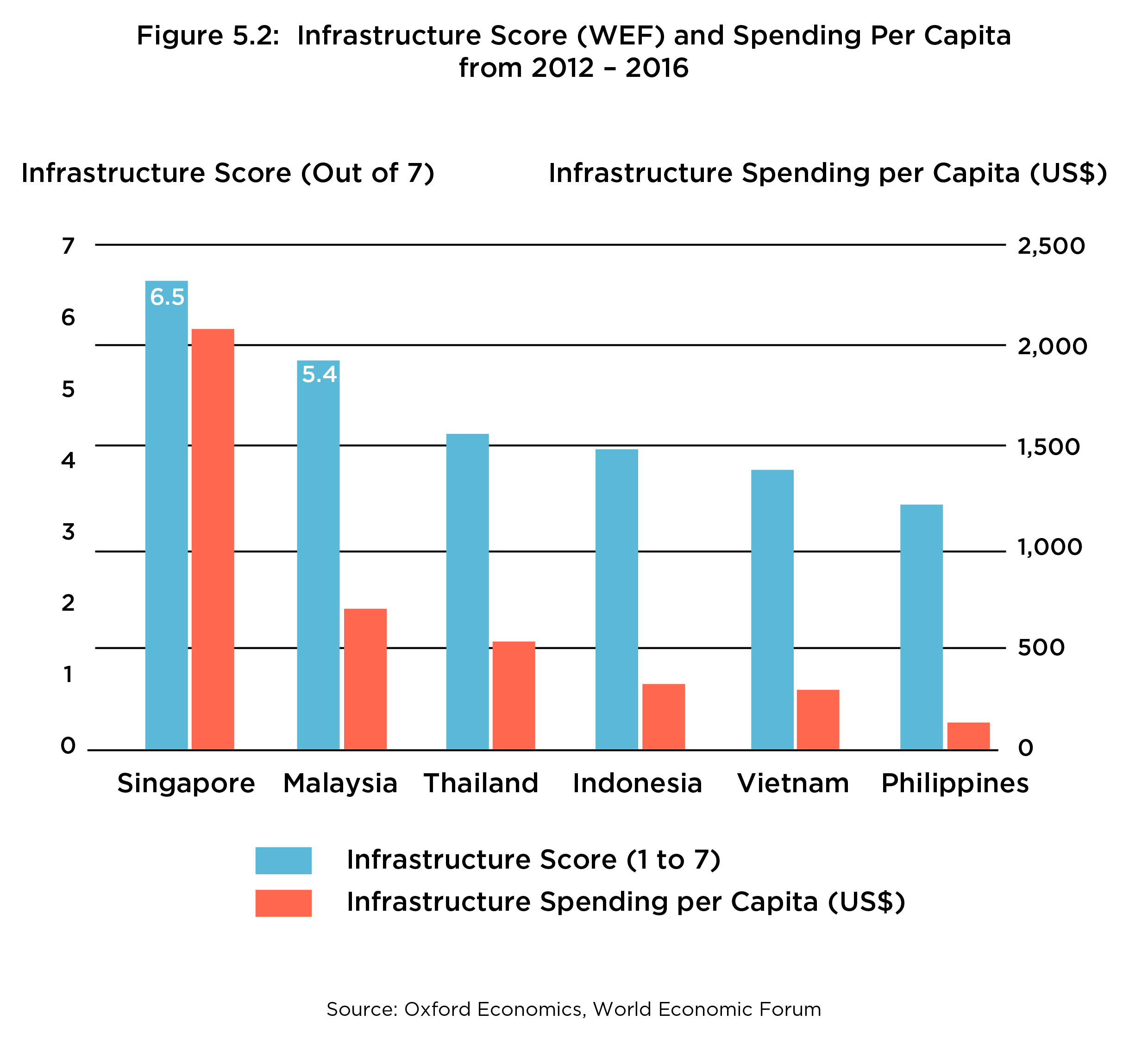 Given infrastructure spending and demand patterns, a 2017 report by the Asian Development Bank estimated an annual infrastructure gap of US$92 billion, or 3.8% of Southeast Asia’s total GDP (baseline estimation), from 2016 to 2020 (excluding Singapore, Brunei, and Laos).13

When looking at the infrastructure spending of different regions between 1992-2013, it should be noted that ASEAN remains behind other regions such as China, India, and the Middle East. According to data by the McKinsey Global Institute, selected ASEAN countries such as Malaysia, Indonesia, the Philippines, Vietnam and Thailand only spent an average of about 3.6% of their GDP on infrastructure between 1992 and 2013. (Figure 5.3).15 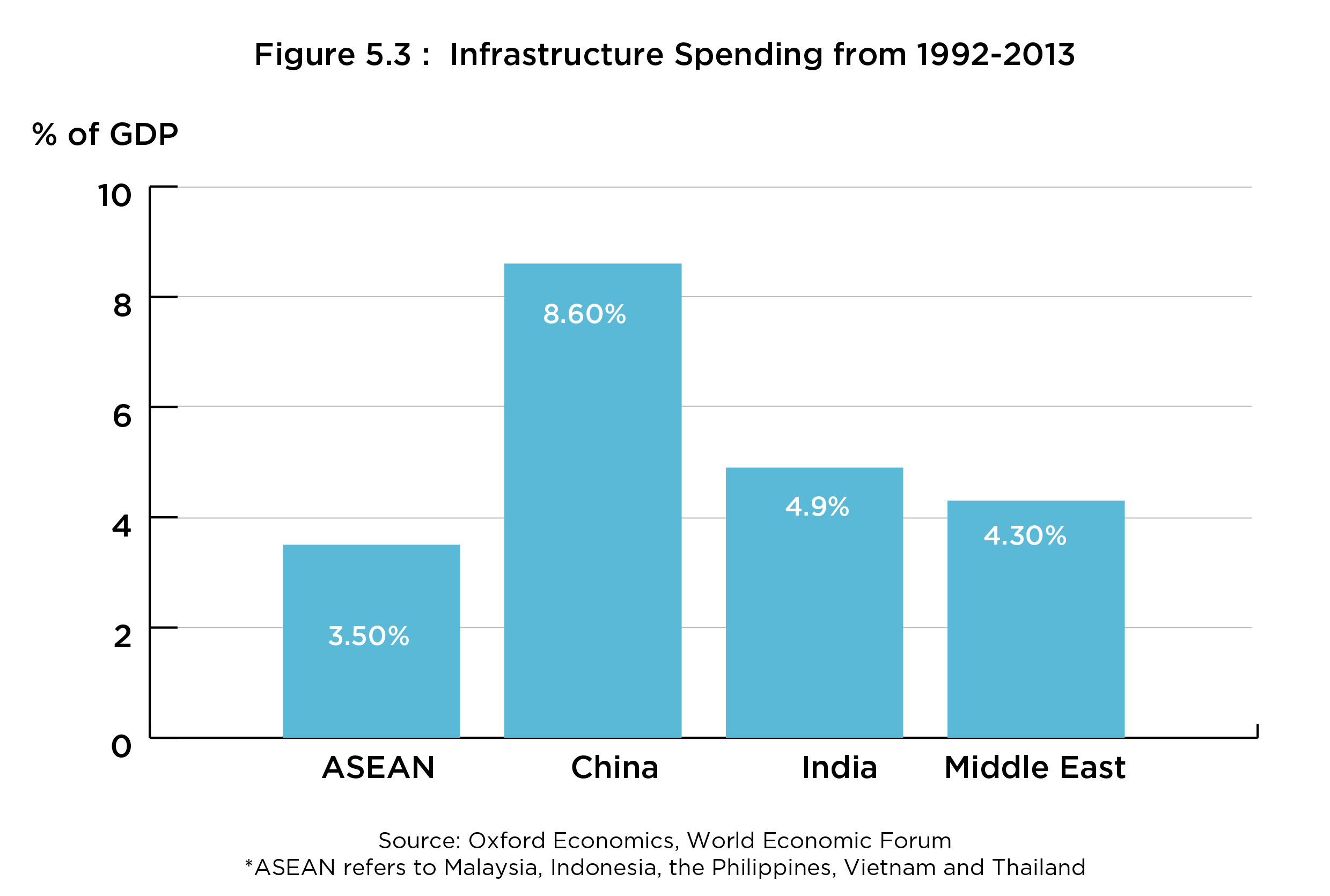 One hindrance to ASEAN’s infrastructure drive has been the region’s relatively inconsistent implementation of said projects. According to a 2018 report by McKinsey Global Institute, a lack of government commitment and a lag in managerial skills have meant an inconsistent infrastructure project implementation record for many ASEAN countries. A McKinsey survey of 7,786 Southeast Asian projects between 2007 and 2017 found that in certain countries, up to 11% of announced projects were cancelled or delayed indefinitely. 16

China’s Belt and Road Initiative (BRI) has been pointed to as a possible solution for ASEAN’s infrastructure gaps. Despite the geopolitical and geo-economic concerns that have been raised about the BRI (including concerns over so-called ‘debt diplomacy’), ASEAN has been the largest recipient of BRI-related investments and construction projects between 2013 and 2018, totalling some US$145.33 billion. This is the equivalent of 24% of the total BRI-related investments and construction projects worldwide within the same time period, which measured at US$602.96 billion. For context, ASEAN’s share of BRI-related projects was roughly three times the size of Europe’s, and with a slight lead over Sub-Saharan Africa. 17

However, the actual implementation record for BRI projects remains mixed. According to the American Enterprise Institute’s (AEI) Global Investment Tracker, by total costs, Malaysia ranked the highest in terms of ‘troubled’ BRI-related Chinese investments and construction projects, at US$5.44 billion between 2013 and 2018 (Figure 5.4). The AEI Global Investment Tracker defined ‘troubled’ projects as those in which said projects became impaired or failed after a commercial agreement was struck. 18 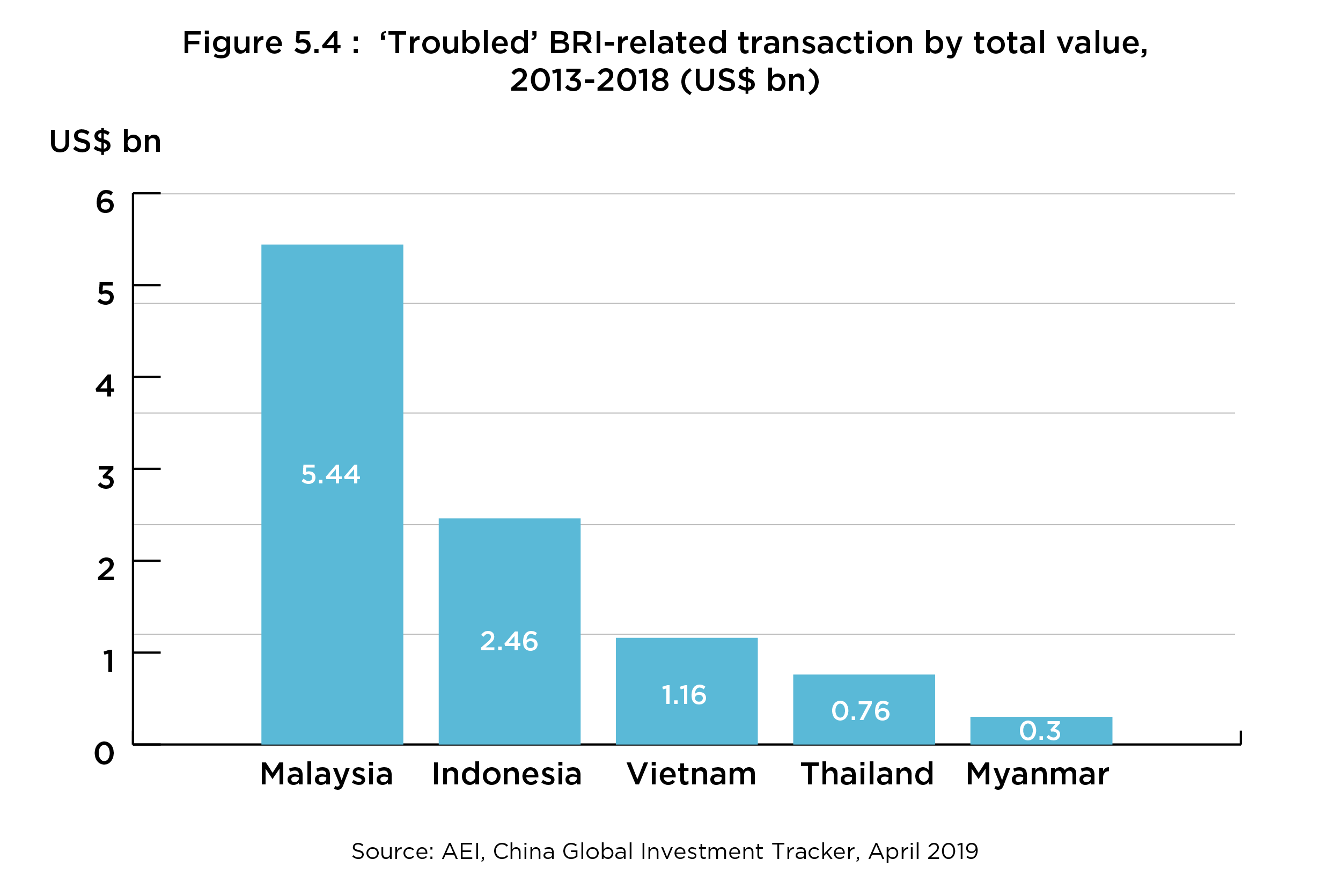 ASEAN’s share of global exports has rose from 2% in 1967 to 7% in 2016, indicating greater penetration of ASEAN products into global markets. 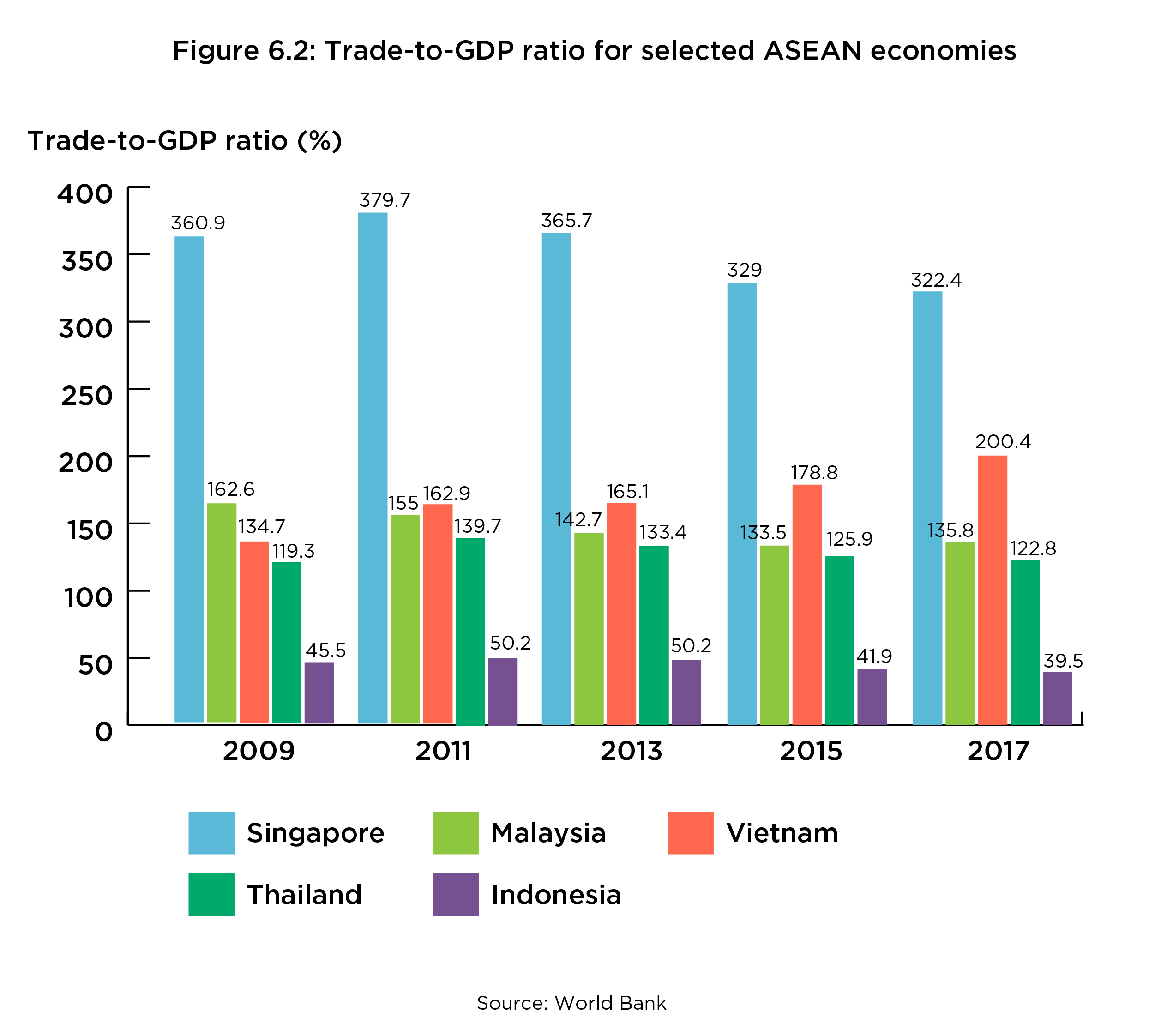 According to the ASEAN Secretariat, the value of ASEAN’s trade in goods increased by around 35.4% from 2008 to 2017, reaching around US$2,574.8 billion. Extra-regional trading relationships have played a dominant role to fuel this growth.

For example, around 76.5% of exports from ASEAN in 2017 was with extra-ASEAN partners (Figure 6.3). Out of which, 53.6% of exports was with China, EU, US, Japan, South Korea, and Australia/New Zealand combined, which is around 30% more than the exports to intra-ASEAN destination.21 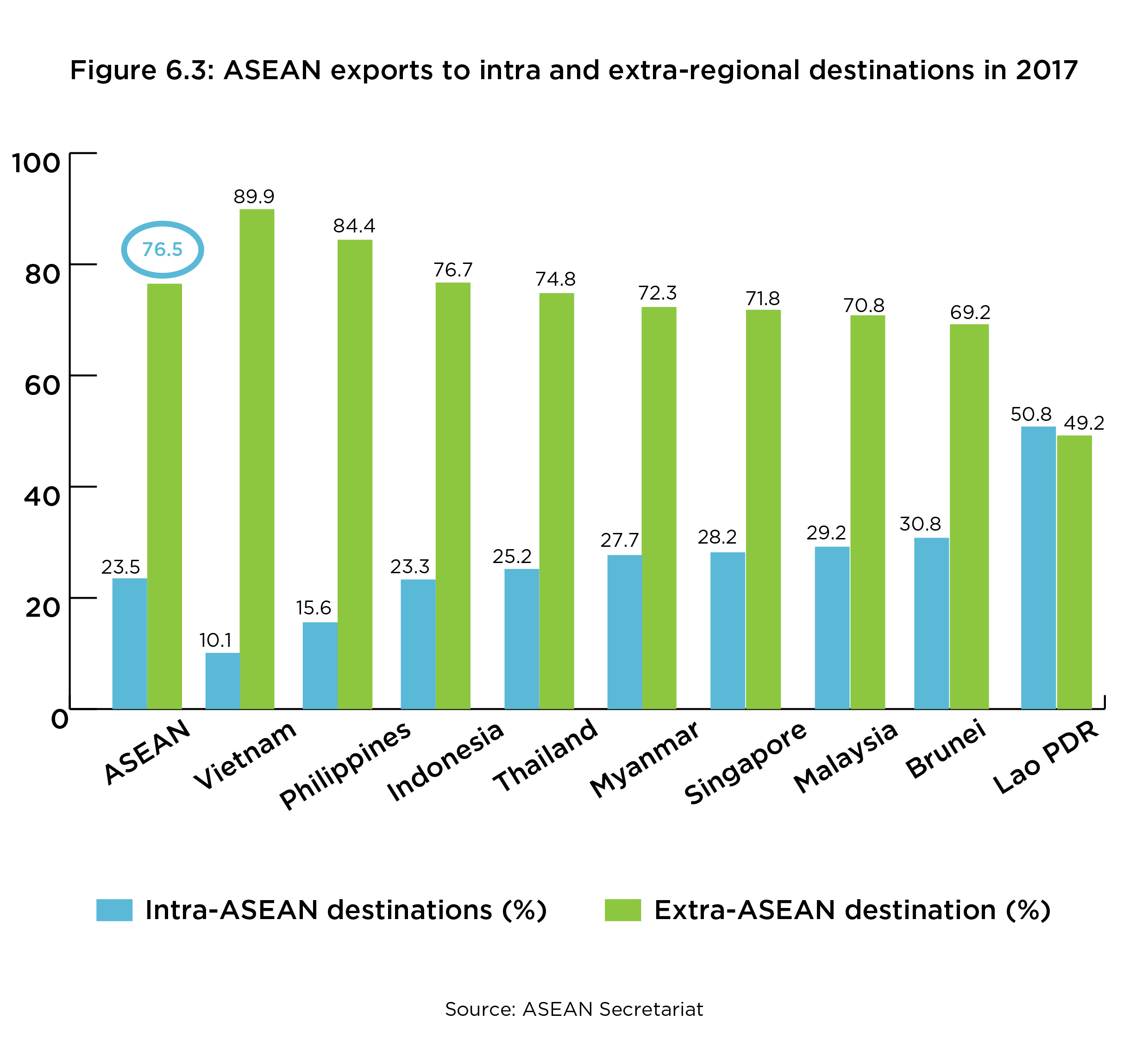 According to the ASEAN+3 Macroeconomic Research Office (AMRO), by 2035, China is expected to continue to account for 22% of ASEAN’s trade whereas ASEAN is forecasted to account for 18% of China’s total trade.22 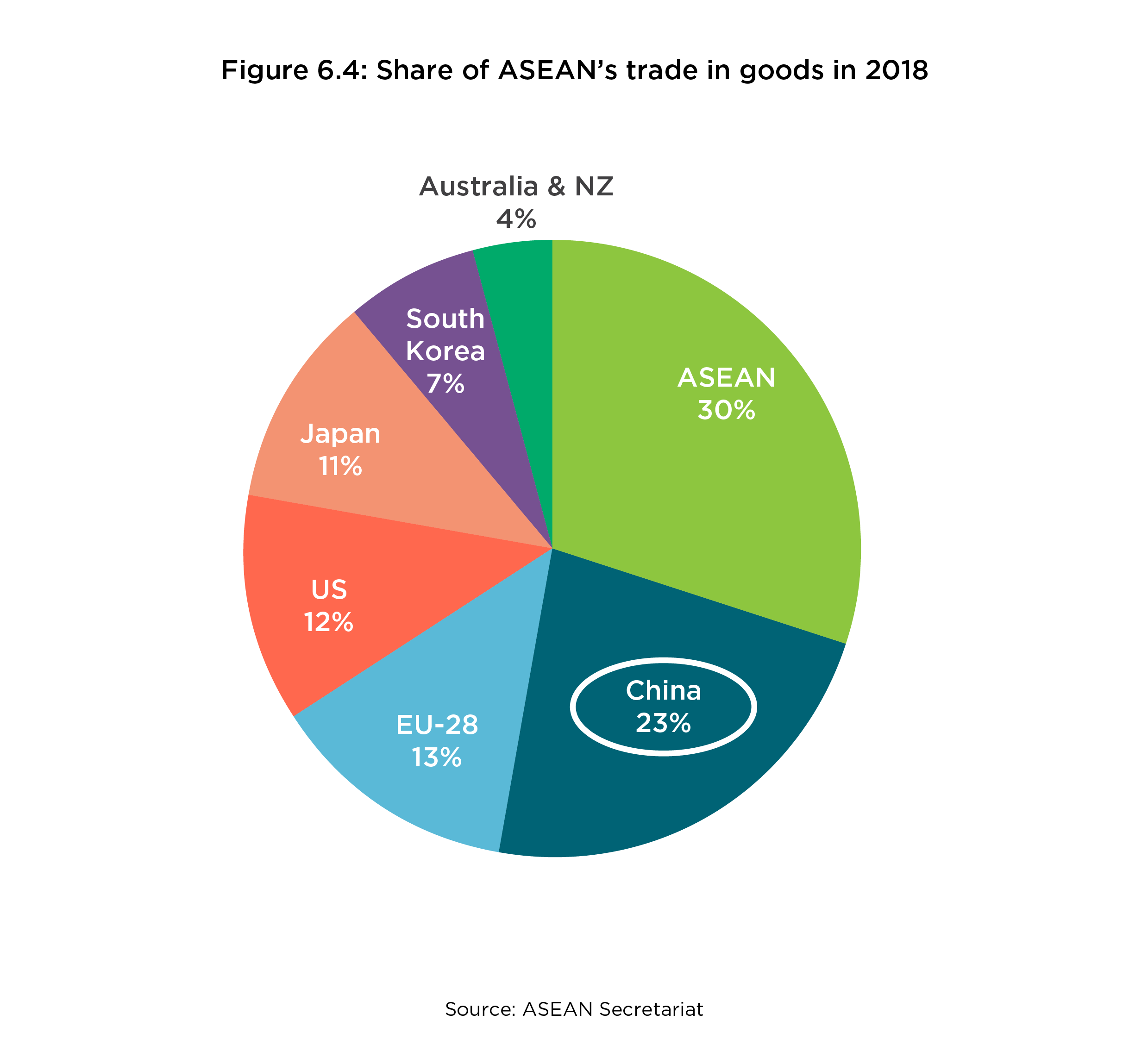 Close to 90% of ASEAN’s GDP is dominated by trade, in particular, merchandise trade. About 77% of its exports is with extra-regional trading partners dominated by six markets, namely China, EU, US, Japan, South Korea, Australia and New Zealand.24 Such a high degree of dependence on markets, which have shown significant economic correlations with each other, renders ASEAN vulnerable to global economic volatility, as is evident presently. This aspect aside, there are other challenges for ASEAN.

For instance, regional productivity levels have generally remained below that of developed economies, such as the US, while labour productivity growth has been inconsistent across the region. Accompanying this are other issues such as rising wages and widening infrastructure gaps. ASEAN’s economic prospects given these vulnerabilities are addressed in the next section, Prospects.


(Note: The term “ASEAN” can refer to either the collection of economies in this region or the intergovernmental institution which was established through the ASEAN Charter of 1967 or both.)