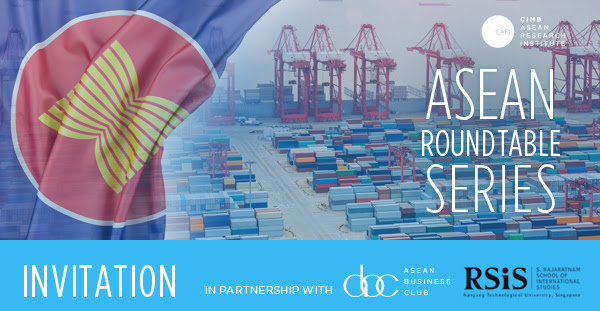 The challenges to remove Non-Tariff-Barriers (NTBs) in ASEAN are both technical and political. Despite having committed to full removal of NTBs by 2015, ASEAN had totally missed the target and is still struggling to tackle the various trade barriers which are on the rise. Will the rise of protectionism further put pressure against the political will to commit to the liberalisation agenda? What does it take to make trade truly free in ASEAN? Why did intra-ASEAN trade stagnate despite the removal of tariffs?

ASEAN as a region is highly intertwined with the global supply chains. The region’s trade-to-GDP ratio in 2016 amounted to 87% relative to the global average of 56%. Historically, the trade-to-GDP ratio rose from 43% in 1967 and peaked at 131% in 2005. The region produced 7% of total global exports in 2017, with extra-ASEAN trade dominating ASEAN’s total exports, measuring 77.1% of total exports in 2017. With the economies of many ASEAN Member States being dependent on the exports of manufactured goods and commodities, recent uncertainties in global markets, in particular, the ongoing trade tensions between China and the US, as well as rising protectionism, have left ASEAN economies vulnerable.

The removal of tariffs among ASEAN countries has been regarded as a significant achievement with the ASEAN-6 (Brunei, Indonesia, Malaysia, the Philippines, Singapore, and Thailand) countries having 99.20% of tariff lines in the Inclusion List at 0-5% import duty1. The CLMV (Cambodia, Laos, Myanmar and Vietnam) countries have committed to tariff reduction efforts in compliance with the Common Effective Preferential Tariff (CEPT) standards by 20182. As of 2016, their tariff removal stood at 90.9%3 of tariff lines. The significant removal of tariffs, however, did not translate into a substantial increase in intra-ASEAN trade in goods. In 2017, the share of intra-ASEAN trade in goods to total ASEAN trade was 23% and was consistently on the downward trend from 24.4% in 2013. Intra-ASEAN trade in goods has stagnated since 20134.

It has been suggested that the rising number of Non-Tariff Measures (NTMs) is a likely impediment to ASEAN’s trade, intra-regionally or with ASEAN’s dialogue partners. Non-tariff measures in ASEAN have increased from 1,634 to 5,975 during 2000-20155. While there must be a distinction between NTMs, which are designed to protect consumers, the trade-distorting Non-Tariff Barriers (NTBs) should be phased out as committed by ASEAN members in the ASEAN Economic Community (AEC) Blueprint 2015 and 2025.

Ms Alpana Roy oversees the ASEAN Division in the Ministry of Trade and Industry (MTI) and is Singapore’s Senior Economic Official to ASEAN.

Prior to her appointment as Director (ASEAN), Alpana was Deputy Director for ASEAN, Southeast Asia, and Counsellor (Economic) at the Embassy of Singapore in Washington D C. She has been responsible for advancing Singapore’s economic relations with the Americas, Southeast Asia, ASEAN and the Asia Pacific Economic Cooperation (APEC). Alpana has also been involved in the negotiation, implementation and review of Singapore’s Free Trade Agreement (FTAs) with the United States, Panama, Peru, Costa Rica and the TransPacific Strategic Economic Partnership (P4). In ASEAN, she oversees internal integration issues, ASEAN’s ties with external partners and was the Chief Negotiator for ASEAN’s FTAs with Hong Kong and Japan, as well as the upgrade of the ASEAN-China FTA. Alpana is also the Deputy Chief Negotiator for the Regional Comprehensive Economic Partnership

Tan Sri Datuk Rebecca Fatima Sta Maria is the executive director of the APEC Secretariat based in Singapore, which serves as advisory body, implementation arm and custodian of institutional memory for the 21 member economies that make up the APEC forum.

Dr Sta Maria played an integral role in Malaysia’s participation in multilateral forums such as APEC, where she often represented her economy during the APEC Ministers’ Responsible for Trade Meetings and the Small and Medium Enterprises Ministerial Meetings.

An accomplished academic and writer, Dr Sta Maria’s scholarship has been recognized through awards from the American Academy of Human Resource Development and from the University of Georgia. In 2017, she authored a book about her personal slice of Malaysian heritage and cuisine, called The Smell of Home.

Participation is strictly by invitation only. For further enquiries and details kindly email to wood@cariasean.org