Home / ASEAN Roundtable Series in partnership with the Embassy of Sweden in Malaysia: How does ASEAN navigate the new trade [dis]order? 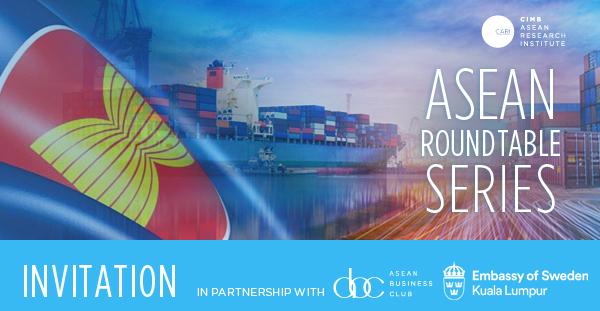 TOPIC: ASEAN Roundtable Series in partnership with the Embassy of Sweden in Malaysia: How does ASEAN navigate the new trade [dis]order?

ASEAN sits in the India-ASEAN-China corridor which has been dubbed as the ‘golden arc of opportunity’ due to the projected rise in upper and middle-income classes in the next two decades.1 However, due to the region’s reliance on world trade, ASEAN is vulnerable to the new world trade order that is characterised by rising protectionism, nationalism and trade tension.

ASEAN’s total trade in 2017 with the world rose by 61% to US$2.6 trillion from US$1.6 trillion in 2007,2 further demonstrating ASEAN’s reliance on and vulnerability to global economic headwinds. The World Trade Organization projected a slowdown in global trade growth from an estimated 3.9% in 2018 to 3.7% this year,3 and emerging Asia is likely to feel the effects of the global slowdown.4

With regards to the US-China trade tension, the two countries are in the midst of negotiating a trade deal that would lower Chinese tariffs on a list of US goods if the US removes its range of sanctions against Beijing.5 But until a deal has been finalised, the uncertainty in the market will linger.

China’s Belt and Road Initiative (BRI) continues to dominate ASEAN Member States’ domestic political-economic discourse, while the Brexit impasse continues to loom over the European markets thereby posing potential economic repercussions around the world. Although the UK only makes up 1.5% of ASEAN exports in 2015, ASEAN’s trade with the EU stood at 13% in 2014. An economic slump in the EU caused by the Brexit would pose a significant challenge to ASEAN.6 Meanwhile, ASEAN’s trade with India has moderated since 2008,7 despite the potential economic benefits from increased trade between the two.

As one of the top ten global trading powerhouse, how can ASEAN navigate the geopolitical dynamics in of the new world trade order, or “disorder”? How should ASEAN balance its regional priorities between the west and the east?

Prior to his current position, he was previously the State Secretary to Minister for Enterprise and Innovation Mikael Damberg from 2016 to 2018.

Aside from his political career, Johansson is an experienced businessman. He served as the Chair of the Board of Directors of Friends Agenda AB, a business development and branding agency, from 2012 to 2016. He was the Deputy Chair of Fujian Opcon Energy Technology Co., Ltd, China, a screw expanding power generator manufacturer, from 2014 to 2016. He served as Board Member of Opcon Compressor Technology AB, Svenska Rotor Maskiner AB, Opcon Energy System AB (OES), which develops technology for the generation of electricity from waste heat and from 2007 and 2016, Johansson was the Deputy CEO at Trention AB, formerly Opcon.

His Excellency Dag Juhlin-DannfeltAmbassador of Sweden in Malaysia

Dag Juhlin-Dannfelt has a background in law and began his career as a Junior Judge at the County Court of Strömstad, Sweden. He joined the foreign service in 1990, working with European affairs until 1994. From 1994 to 2005, he worked at the Swedish Embassies in Teheran, Tel Aviv and Islamabad (covering Pakistan and Afghanistan). 2005-2011 he worked at the Ministry for Foreign Affairs in Stockholm, holding the positions of Coordinator for Development Cooperation and Human Rights for Middle East (2005-2006), Head of the Gulf Section (2006-2008) and then Deputy Head of the Middle East and North Africa Department (2008-2011). From September 2011 to August 2016, Juhlin-Dannfelt was Ambassador of Sweden to the Kingdom of Saudi Arabia, and Non-resident Ambassador to the Sultanate of Oman, State of Kuwait and Republic of Yemen. Since 1 September 2016, Juhlin-Dannfelt is Ambassador of Sweden to Malaysia, having presented Letter of Credence on 2 December 2016.

Dr. Kuik Cheng-Chwee is an associate professor at the Institute of Malaysian and International Studies (IKMAS), the National University of Malaysia (UKM). He is concurrently a nonresident fellow at the Foreign Policy Institute, Johns Hopkins SAIS, Washington, DC. He is co-founder of the East Asian International Relations (EAIR) Caucus, a research platform for exchange, engagement, and empowerment among foreign affairs professionals in Malaysia. Previously he was a postdoctoral research associate at the Princeton-Harvard “China and the World” Program (CWP) and a visiting research fellow at Oxford’s Department of Politics and International Relations.

Dr. Kuik is a regular invited speaker to international conferences and closed-door policy roundtables. His current projects include: hedging in international relations, ASEAN states’ responses to China’s Belt and Road Initiative (with Lee Jones), and politics of China-related railroad projects in Southeast Asia (with David Lampton and Selina Ho). Cheng-Chwee serves on the editorial boards of Contemporary Southeast Asia, Australian Journal of International Affairs, and Routledge’s “IR Theory and Practice in Asia” Book Series. He holds an M.Litt. from the University of St. Andrews, and a PhD from the Johns Hopkins University’s School of Advanced International Studies.

Dr. Ooi Kee Beng is the Executive Director of Penang Institute. He was the Deputy Director (2011-2017) of Singapore’s ISEAS – Yusof Ishak Institute, where he had been a fellow since 2004. Born in Penang, Malaysia, he received his PhD in Sinology from Stockholm University.

His many books include The Eurasian Core and Its Edges: Dialogues with Wang Gungwu on the History of the World. His book, The Reluctant Politician: Tun Dr Ismail and His Time, won the “Award of Excellence for Best Writing Published in Book Form on Any Aspect of Asia (Non-Fiction)”. His latest book is Catharsis: A Second Chance for Democracy in Malaysia. His personal website is: wikibeng.com.

Tobias Glitterstam is the Vice President and Regional Manager of Asia Pacific at Business Sweden. Being based in Shanghai, he is leading the organisation with 11 Trade Commissioners, 15 offices and 150 market expansion consultants in the region.

Glitterstam has extensive experience of consulting multinationals and leading Asian enterprises in the area of internationalisation and business growth, formerly as a Partner of the renowned consulting firm Accenture. He has operated in Asia since 2003, with a particular focus on the Chinese market.

Glitterstam was appointed to VP Asia Pacific in 2016, after having first joined Business Sweden as the Trade Commissioner to China back in 2015. In his current capacity he is steering business promotion efforts across the region, in areas such as Smart Cities, Industry 4.0, future transportation, life science and environment, always under the theme of Sweden as a leader in Innovation and Sustainability.

Furthermore Glitterstam is a senior advisor to Swedish enterprises in the area of market entry and business growth in Asia Pacific, often in the direction of exploring frontier markets, strategic innovation, expansion into new segments, market partnerships and M&A. Glitterstam also oversees the Swedish Invest promotion organisation in Asia Pacific with the objective of attracting investments into Sweden.

Tobias Glitterstam holds a degree in Business from Lund School of Economics and Management. He lives in China with his wife Karin and their three children.

He held various positions/advisory roles in the government agencies and corporate companies. He joined Standard Telephone & Cables Ltd in England as an engineer in 1975 and subsequently worked as an engineer with Telecommunications Authority of Singapore before returning to Malaysia to take up the position of Resident Manager of GTE International Incorporated, USA (Malaysia Representative Office). Mr Ng also was involved in several family companies in housing development, construction and oil palm plantation. He also served for a short period as Managing Director of Hai-O Marketing Sdn Bhd and Hai-O Energy Sdn Bhd as well as Business Advisor of Hiap Teck Venture Berhad.

Mr Ng was elected as the Member of Parliament for Batu Constituency in 1999 to 2008. He served in the Malaysian Government as Deputy Minister of Ministry of International Trade and Industry (MITI) (2006-2008) and Parliamentary Secretary of Ministry of Plantation Industries & Commodities (2004-2006). He also was the Chairman of Malaysian Logistics Council as well as Chairman of Federation of ASEAN Shippers Council. He served as Chairman/Director of Malaysian Futures Clearing Corporation and Deputy Chairman/Director of Kuala Lumpur Commodity Exchange.

Since 2009, Mr Ng has been an Honourary Advisory of Malaysia-China Chamber of Commerce.

He has an extensive experience and is well known in the Malaysian corporate world. He had been the Group Editor of the New Straits Times, first executive chairman of CIMB and founding chairman of the Malaysian Securities Commission. After stepping down from the Securities Commission in 1999, he became Independent Non-Executive Director of Telekom Malaysia Berhad, Chairman of Celcom (Malaysia) Berhad and Non-Executive Chairman of Malaysian Airline System Berhad. He was Founder President of the Kuala Lumpur Business Club, established in 2003 and is a member of the Court of Fellows of the Malaysian Institute of Management.

Tan Sri Dr. Munir obtained a B.Sc (Econ) and Ph.D in International Relations from the London School of Economic and Political Science (LSE) in 1971 and 1978. He is an Honorary Fellow of LSE and continues the long association with his alma mater as Visiting Senior Fellow at LSE IDEAS (Centre of International Affairs, Diplomacy and Strategy). Tan Sri Dr. Munir is an associate of Southeast Asia Centre (SEAC) at LSE.

Participation is strictly by invitation only. For further enquiries and details kindly email to wood@cariasean.org