Home / ASEAN Roundtable Series on Malaysia-Thailand: Towards Connectivity Beyond Borders 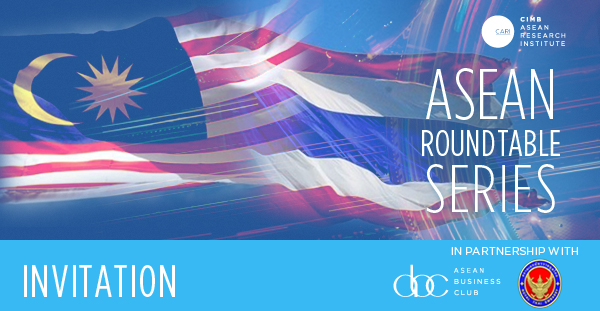 TOPIC: ASEAN Roundtable Series on Malaysia-Thailand: Towards Connectivity Beyond Borders

A great premium has been placed on the importance of connectivity within ASEAN, encompassing the realm of infrastructure, cross-border trade and investments, and people-to-people linkages. Greater connectivity will be key in achieving the political, economic, and socio-cultural pillars of an integrated ASEAN Community. In September 2016, ASEAN adopted the Master Plan of ASEAN Connectivity 2025, which envisioned a seamlessly connected region.

With a new decade fraught with geopolitical risks and rising protectionism, ASEAN must seek to make the ASEAN Community a reality. Thailand and Malaysia, as ASEAN’s second and third largest economies respectively, can play a key role. Both countries are situated where mainland and maritime Southeast Asia converge, and whose bilateral trade makes up 40% of total intra-regional trade. These factors alone ensure that any move to facilitate connectivity between both countries can possibly catalyse greater regionalism.

The foundations for greater connectivity remain strong. As of 2019, Thailand served as Malaysia’s second-largest trading partner within ASEAN, while conversely, Malaysia was Thailand’s largest ASEAN trading partner. Connectivity was a major theme of Thailand’s 2019 ASEAN Chairmanship, while Malaysia, as APEC 2020 host, identified economic integration as part of its theme of Shared Prosperity.

CARI’s first ASEAN Roundtable Series of 2020, organised in collaboration with the Royal Thai Embassy in Malaysia, will be focused on Malaysian and Thai connectivity beyond borders. Distinguished speakers will include H.E. Mr. Arkhom Termpittayapaisith, former Minister of Transport for Thailand, and YB Dato’ Sri Mustapa bin Mohamed, Former Minister of International Trade and Industry and currently Chairman of the Bumiputera Agenda Steering Unit (Teraju). The session will explore the past and future of Thai-Malaysian connectivity and how this vital relationship can spearhead greater ASEAN inter-connectivity.

​​H.E. Narong Sasitorn, Ambassador of Thailand to Malaysia Ambassador Narong Sasitorn is a career diplomat. Prior to his assignment in Kuala Lumpur, he served in various capacities in the Ministry of Foreign Affairs in Bangkok including Director General of the Department of South Asian, Middle East and African Affairs in 2012 as well as a Deputy Permanent Secretary for Foreign Affairs in charge of bilateral relations in 2013.

During 1987-1991, he served as a Second Secretary in the Permanent Mission of Thailand to the United Nations in New York and later as a First Secretary to the Royal Thai Embassy in Beijing. In 2007-2012, he was Thailand’s Consul General in Chicago and before coming to Kuala Lumpur, he served as the Kingdom’s Ambassador to Czech Republic during 2015-2018.

Ambassador Narong graduated from Thammasat University in Bangkok with Bachelor’s and Master’s degrees in Political Science (International Relations). He is married to Chantana Sasitorn and has two grown-up children, Sira and Sirada Sasitorn.

​​H.E. Arkhom Termpittayapaisith, Former Minister of Transport Thailand Arkhom Termpittayapaisith was the former Minister of Transport of Thailand who played a crucial role in the development of all mega projects to leapfrog Thailand’s transportation and logistics networks and the country’s competitiveness on the global stage during 2015-2018. Prior to his appointment as the Minister, he was the Secretary-General of the National Economic and Social Development Board (NESDB), the main agency which formulates and oversees the country’s national development strategy. As head of the agency, he had taken many important roles in shaping the future of the nation. His vast experience cuts across a wide range of areas. He also extensively involved in the formulation of connectivity strategy in the Greater Mekong Subregion (GMS) framework which later culminated into the Master Plan on ASEAN Connectivity.

He currently serves as a member of the Council of State of Thailand and still largely involves in the country’s public policy circles.

Dato’ Sri Mustapa Mohamed is currently the Member of Parliament for Jeli and was first elected in 1995. He is also the Chairman of the Parliamentary Budget Committee, and was recently appointed Chairman of of the Bumiputera Agenda Steering Unit (TERAJU), a strategic government agency under the Ministry of Economic Affairs designed to steer and coordinate Bumiputera economic participation. He previously served as the Minister of Entrepreneur Development (1995-1999). As the Asian Financial Crisis hit Malaysia, Dato’ Sri Mustapa was later appointed as the Second Finance Minister in 1998 – making him the first Malaysian to hold two Ministerial portfolios at the same time. He has also served as the Minister of Higher Education (2006- 2008) and Minister of Agriculture and Agro-Based Industry (2008 –2009). The last Ministerial position that he held was the Minister of International Trade and Industry (2009-2018).

​​Tan Sri Dr. Munir Majid Chairman, CIMB ASEAN Research Institute President, ASEAN Business Club Tan Sri Dr. Munir is currently Chairman of CIMB ASEAN Research Institute, of Bank Muamalat Malaysia Berhad, of the Financial Services Professional Board, of ASEAN Business Advisory Council, Malaysia, as well as President of the ASEAN Business Club. He is a member of the Economic Action Council chaired by the Prime Minister of Malaysia. He also sits on the board of the Institute of Strategic and International Studies (ISIS) Malaysia. He is an active advocate of deeper ASEAN economic integration.

​​REGISTRATION Participation is strictly by invitation only. For further enquiries and details kindly email to wood@cariasean.org
Contact Form Powered By : XYZScripts.com