Published on 26 January 2017
by Arup Raha and Krzysztof Halladin

For the past few years, the Philippines has been one of ASEAN’s best economic stories. It has moved towards macroeconomic stability, increased transparency, created fiscal space, and managed to grow at a healthy pace despite external headwinds. These trends should continue through 2017 and 2018. We expect GDP growth of 6.8% in 2016 and for it to be mainly domestic demand led. A small rise to 6.9% is expected in 2017, as infrastructure projects and private consumption continue to support the economy. The robustness of domestic demand should keep import growth strong, which together with moderate export growth, means that the trade deficit should increase. The current account, however, should remain at a healthy surplus thanks to remittances. Inflation was down to a 20-year low of 1.4% at the end of 2015 but has inched up to 2% in 3Q16 this year, mainly driven by increasing food prices. Nonetheless, it should stay well within the BSP’s target range of 2% to 4%. The combination of strong domestic demand and controlled inflation means it is unlikely that the BSP will change monetary policy settings anytime soon. In our view, fiscal policy should be a lot more active and the PHP should further depreciate against the dollar while tracking other regional currencies.

Domestic demand to the fore

Inflation edging up but still within the target; PHP to be weaker 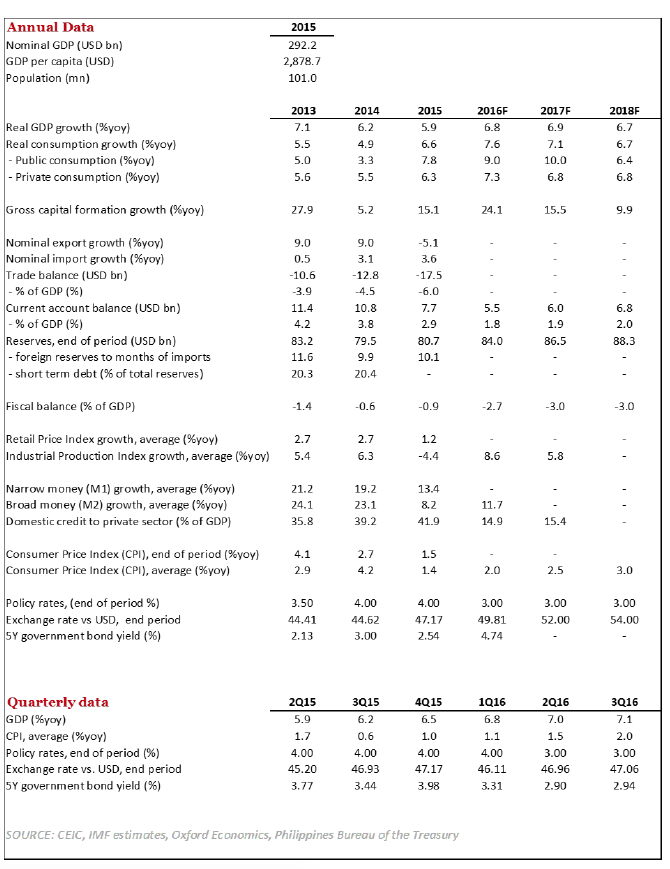