Global bond markets – EM will be challenged
Global bond markets have had a difficult time recently. First, in October 2016, the UK reported stronger-than-expected growth and also the ECB and BOJ both signalled that they may exit their ultra-loose monetary settings earlier than expected. There was a fear of yields rising in developed markets. Then came the US elections and the expectation that a Trump administration would lead to greater fiscal stimulus, higher growth and higher inflation. The yield on the 10 year Treasury rose from 1.80% to 2.30% post the US elections.

Emerging market (EM) bonds markets took the brunt of the rout. Data from the Institute of International Finance (IIF) suggests there was private sector debt net outflow of $11.2 billion from emerging Asia in Oct 2016 and further outflows of $10.8 billion in Nov and $7.2 billion in Dec 2016 as sentiment remained bearish. This contrasted with an average net inflow of $4.6 billion per month in the nine months preceding that. Meanwhile, Bloomberg reported that global bonds value wiped off was $1.2 trillion in the week of the US election in Nov 2016.

With outflows from EM, yields surged. With the expectation that global inflation may at last start to move higher, holding of long government bonds look overcrowded. As it were, past years’ increase in duration play to score higher yielding long tenor bonds is now a risk, as higher
duration bonds translate into heavier capital losses in a rising interest rate environment.

I see fair amount of risk in EM bond markets in 2017. It is likely EM yield advantage will continue to decline as the Fed hikes and the world adapts to a new US outlook. Just before the US presidential election the IIF had expected private non-resident net inflows (equity and bonds) into EM of +$769 billion in 2017, up from +$640 billion in 2016 and +$263 billion 2015 though stilldown from $1,040 billion in 2014. With the latest risks factored in, flows into EM should be vastly different.

How EM bonds will perform will ultimately depend on (a) volatility and (b) valuations. In 2017, episodes of outflow from EM will accelerate during periods of volatility in global bond markets (such as the current post US election period). A measure of bond market volatility, the Merrill Lynch’s MOVE index shot up to around 89 reading post-election from prior levels of around 68. One potential risk that might raise volatility, and that we will watch out for, is announcements from the new US administration on trade policy, specifically those that impact trade with Asia.

If based on valuations, post US-election we noted that the yield advantage of EM Asian bond has decreased. However, spreads still remain relatively attractive. For instance, 10-year bond spreads of Malaysian bonds over 10-year UST was 185bps mid-Nov after the US election
compared with 217bps six months before.

Meanwhile, carry returns of EM Asian currencies took a beating post-election, but remain positively slanted towards Asian currencies. Bloomberg’s index of four Asian EM currencies’ (INR, IDR, PHP, THB) carry returns against USD dipped on 8 Nov 2016 but remained near its yearly high. The problem is that EM outflows could rise again if USD interest rates rise. One could argue that if EM yields rise in step then flows on a net basis will cancel out. However, by then the damage would already have been done. 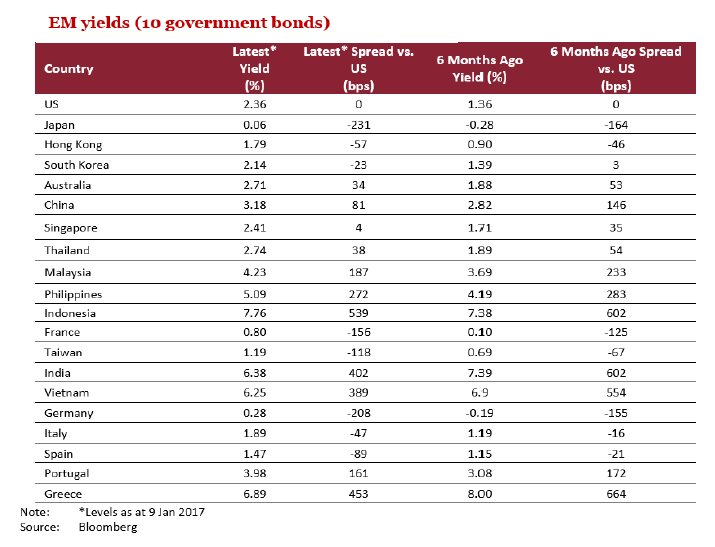 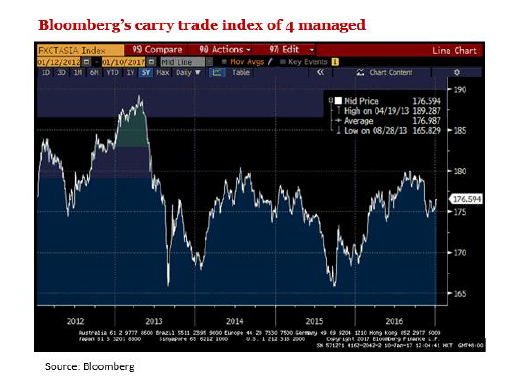 Thus taking into consideration the risks and returns, there would be a small overall debt market net inflow into EM in 2017 – definitely smaller than the IIF projections considering the recent selloff. My assumptions are:

US Treasuries – steepening the curve
US Treasuries in 2017 will be led by (1) Fed policy expectations (yields were already rising on anticipation of Fed hikes), (2) anticipated inflationary pressure, and (3) increase in government borrowings due to expected US fiscal expansion. The post US election surge in longer end of the yield curve was primarily the pricing in of fiscal spending. And yields rising and curve steepening signaled players had priced in the Dec 2016 Fed hike (higher bond yields gives Fed assurance the market will not react negatively to a quick hike in FFR). Hence, I pencil in a far steeper UST yield curve in 2017 – target 2T at 1.50% and 10T 2.75-3.00% (assuming low of 1.00-1.25% Fed Funds Rate end-2017).

However, limiting the upside in yields is the risk of only gradual tightening by the Fed, and delays in fiscal stimulus. On the monetary side, effective real interest rates may still need to be relatively low in 2017. On the fiscal side, even though expectations are high that there will be stimulus, it may not happen immediately. As it were, the method for projecting US Treasury yields primarily depend on four factors namely US manufacturing activity, consumer inflation, short term rates (3M Libor expectation), and the VIX index for global market volatility.