A modest recovery is underway in Thailand. The economy is expected to grow by 3.1% in 2016 after growing by 2.8% in 2015. In 2017, my expectation is for a further increase to 3.3% growth. The recovery is not yet firm as various components of growth slowed in 3Q16 for an aggregate clip of 3.2% compared with a 3.5% rate in Q2. Moreover, with sentiment being negatively affected by King Bhumibol’s passing, 4Q growth is unlikely to be much better. Growth is not yet broad-based as private investment remains soft as do exports. Nevertheless, agricultural incomes are rising, tourism is doing well, and the government is supportive in its fiscal plans. Public investment is likely to be a key driver of growth in 2017 and beyond. On the supply side, services, mainly tourism receipts are strong but manufacturing is sluggish. Inflation remains soft at less than 1% despite a recent rise and real rates are low; the policy rate has held steady at 1.5% since April 2015 and I do not expect a change any time soon
even with rising US rates. A large current account surplus has allowed the THB to be less volatile than most regional currencies and I expect it to continue to be resilient to external shocks. In 2017, I expect it to move in line with the Chinese RMB to maintain trade competitiveness.

Growth – a slow recovery that needs to broaden out 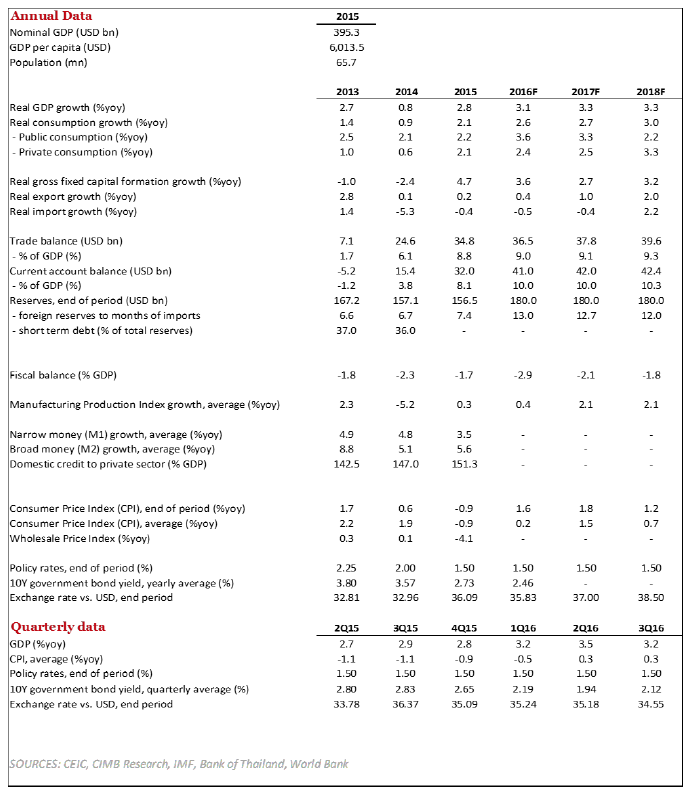