Published on 23 January 2017
by Dr. Arup Raha and Krzysztof Halladin

With the expected real GDP growth of 7% this year and forecasted 6.9% for both 2017 and 2018, Cambodia continues on a fast pace led by the export of garments, strong construction activity and government spending. The tourism sector was slowing down but it seems to have benefitted in Q3 from new direct flight routes into Cambodia. Good weather conditions this year have somewhat supported the agriculture sector, which had been troubled by low commodities’ prices. The current account has continued to narrow this year thanks to a steady increase in FDI, strong exports of footwear and textiles, and low oil prices on the import side. Although revenue collection is steadily increasing, the government spending is rising at a faster rate, resulting in a higher fiscal deficit. Consumption spending is edging up as is inflation through the surge in food prices. The risks to an overall positive outlook involve the possible slowdown in China and in the EU; the forthcoming elections in 2017 and 2018; the fallout from US rate hike (as the economy is highly dollarized); and rapid credit growth highly concentrated in real estate and construction sectors. 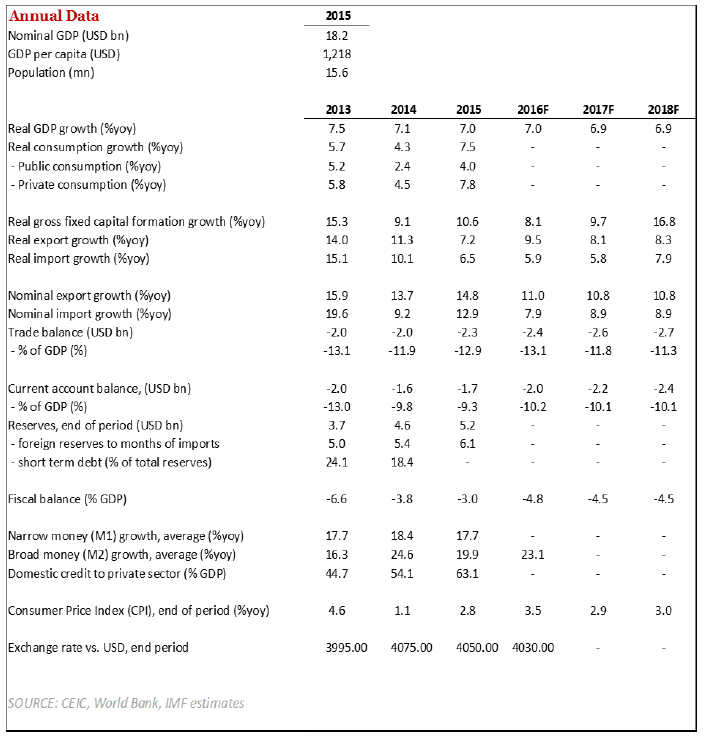