The landlocked economy Lao PDR (Laos) has seen rapid growth in recent years, primarily driven by capital intensive investments in the power sector. Growth remains strong, although it has slowed in 2016, facing headwinds from a subdued growth rate of major trading partners, low global metals prices and a slowdown in agriculture. Inflation has risen but remains contained. Going forward, expect growth to be a tad higher at 6.9%, and moderate inflation. A healthy pipeline of projects in the power sector will keep investments strong and increase electricity production as well as exports. Risks to the domestic economy include a possible reversal of fiscal consolidation, high public debt and weak public banks. On the external front, Laos remains vulnerable to a tightly managed and overvalued exchange rate, low reserves and dollarization.

Growth is slowing but remains elevated; the government balance sheet remains a concern

Risks and other issues 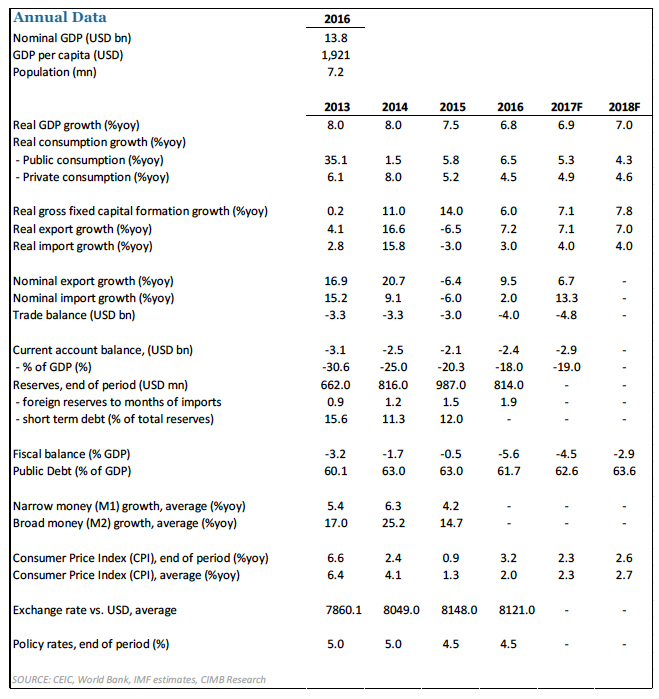 1 The BOL targets exchange rate stability through a peg that keeps the value of the kip within a narrow trading band against the dollar, with a fluctuation permitted of plus or minus 5%
2 As per IMF Staff calculations, which could be attributed to the nominal appreciation of the kip with respect to major partner country currencies (renminbi and baht)