Developments in the first quarter of this year have raised two interesting questions about the outlook for the Malaysian economy. The first is whether GDP growth could actually touch or exceed 5% for 2017; after all 1Q GDP growth was 5.6% yoy, much higher than consensus expectations of 4.8%. The second is that given the current growth rate, and the latest print on inflation at 4.5%, could policy rates rise earlier than what consensus believes? In my view, import demand from China is likely to decline in the coming quarters and that moderation in export growth will feed through to the domestic economy. As such, the current growth momentum should recede and GDP growth for this year is likely to fall short of 5%. Under this scenario, rates should stay steady given that inflationary pressures are mainly cost push for now. However, if growth remains strong, then via higher wage growth inflationary pressures may become demand pull. In the event, the policy rate is likely to be increased. The MYR is currently well supported by inflows and as long as the USD and US bond yields stay soft, the current appreciation trend should continue. However, we believe that with an expected divergence in monetary policy between the Fed and other major central banks, the USD is likely to strengthen toward the end of the year. Moreover, the RMB is likely to weaken as Chinese growth momentum slows. Both these events will put pressure on all regional currencies, including the MYR.

A huge surprise on growth but is it sustainable?

Is there an inflation problem?

Rates and the currency 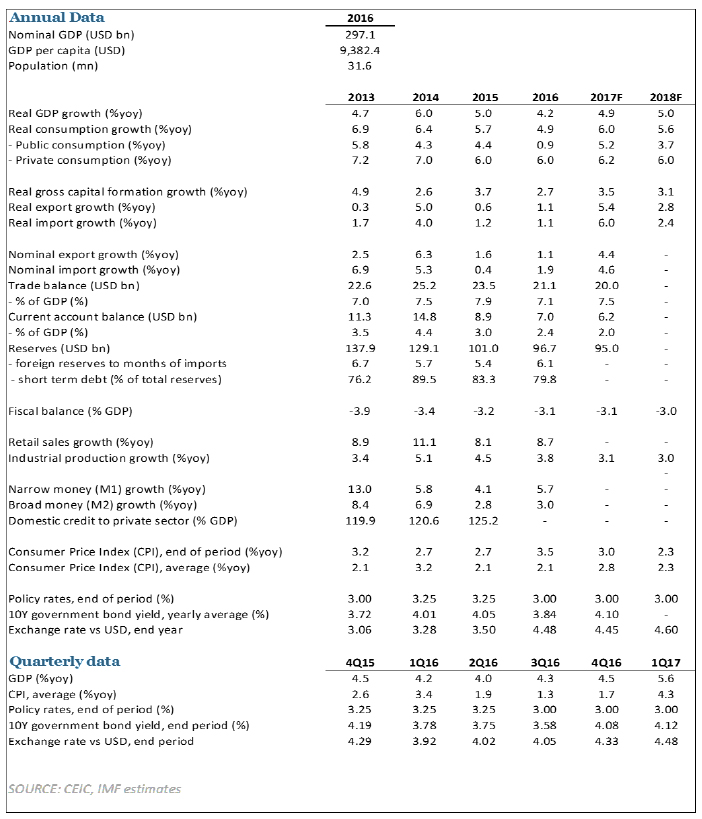