After decades of isolation, followed by five years of reform-driven growth since 2011, Myanmar’s economy is currently expanding at a record rate. The current period of economic expansion results from two main forces: a raft of new government liberalisation policies, which have made it easier to do business in the country; and the fact that Myanmar started from a low development base which has meant wide scope for growth as the economy is playing catch-up. Political reforms have brought about economic benefits, as is evident from the recent easing of the US sanctions in 2016 that had weighed on investor sentiment and trade growth. Myanmar’s growth hinges on public expenditure. Private consumption has been steady over the years and is expected to continue growing in the coming years, driven by private sector-led construction activity as well as rapidly expanding domestic and foreign investment in the services, industrial and agriculture sectors. Overall, economic prospects are favourable on the back of rising tourism, rising investment1 and construction, as well as growing gas exports.

Trade deficit on the rise

Challenges abound for the central bank

Risks and other issues 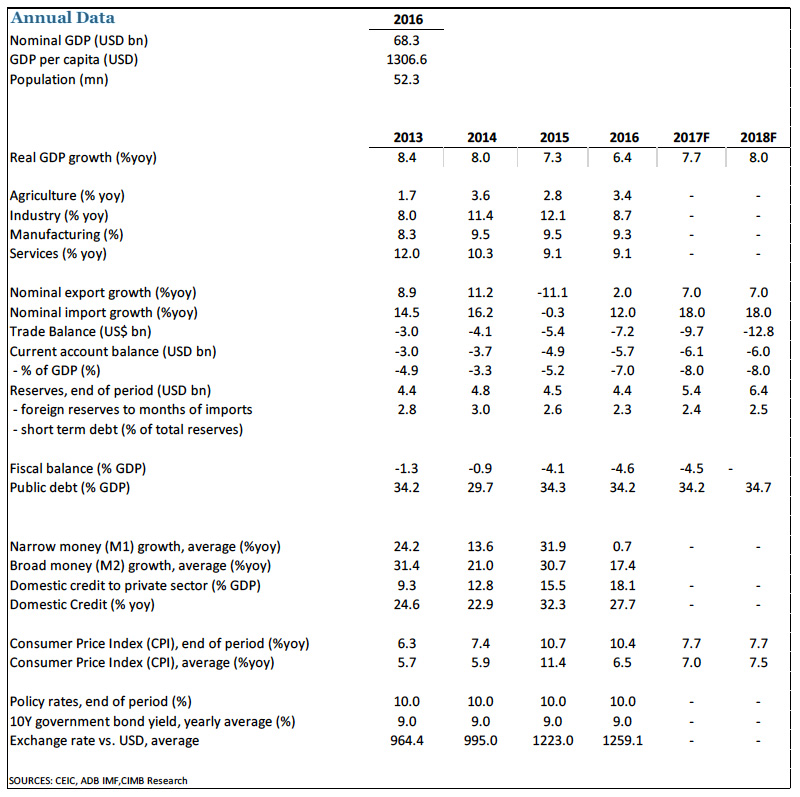 1 Garment manufacturing is growing rapidly and offers opportunities, along with food, retail, telecoms, hotels and hospitality. Also, large projects in areas of oil and gas continues apace.
2 In 2016, the NLD government released its first economic policy, with a focus on providing support to agriculture, industry and infrastructure development as well as highlighting the need to boost foreign investment. In addition, the Foreign Investment Law of 2012 was amended in 2016 making it more investor friendly.
3 Myanmar manufacturing set for takeoff, Nikkei Asian Review Disclaimer: All rights reserved. No part of this report may be reprinted or reproduced or utilised in any form or by any electronic, mechanical or other means, now known or hereafter invented, including photocopying or recording, or in any information storage or retrieval system without proper acknowledgement of CIMB ASEAN Research Institute. The views, responsibility for facts and opinions in this publication rests exclusively with the authors and their interpretations do not necessarily reflect the views of CIMB ASEAN Research Institute.