Published on 18 May 2017
by Nik A. Mukharriz, Director, CIMB Treasury Research-Fixed Income

What bond markets are telling us; Yields are off highs
In November of last year, bond yields surged on expectations of a fiscal stimulus from the new United States (US) administration and a more hawkish outlook on the Fed funds rate. This hawkishness wasn’t just restricted to the US. In the European Union (EU), even as the European Central Bank (ECB) maintained a low interest rate regime, signs of improving growth and rising inflation ignited speculation the ECB will start tapering its asset purchases. Risk-on sentiment surged, driving flows out of bonds and into equities. In the meantime, prospects for higher USD returns, as US Treasuries (UST) yields surged, led to outflows from emerging market (EM) bonds.

The bond markets have had a difficult time recently. First, in October 2016, the UK reported stronger-than-expected growth and the ECB and Bank of Japan(BOJ) both signalled that they may exit their ultra-loose monetary settings earlier than expected. There was a fear of yields rising in developed markets. This was followed by the US elections and the expectation that a Trump administration would lead to greater fiscal stimulus, higher growth and higher inflation. The yield on the 10 year Treasury rose from 1.80% to 2.30% post-elections. 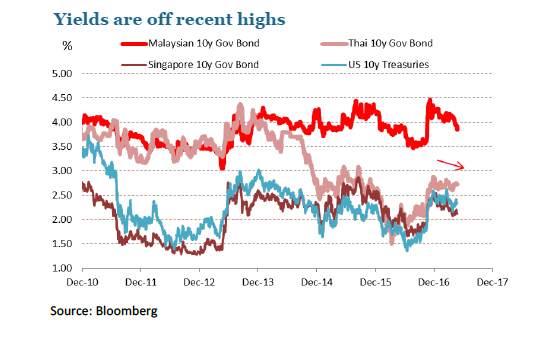 Yields and spreads have since fallen. Current yield levels in several bond markets including EM are at the low end of their three month range. Meanwhile, the UST curve is flatter than earlier in the year. The 2×10 spread is currently 104bps against 136bps in mid-Dec 2016. Plus, EU sovereign yields for countries such as France and Germany are also lower (Yields on UK gilts are also lower but this is due to an abatement of perceived risks related to Brexit). 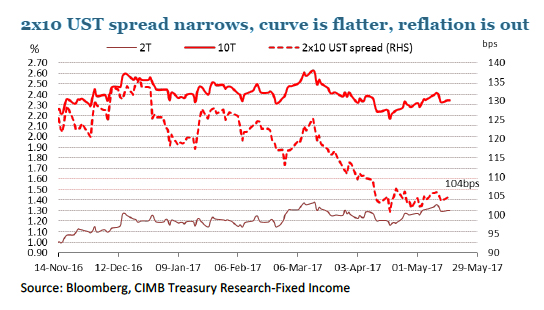 So, what are bonds telling us?

Bonds are highlighting two realities:
The first, is to not count on a quick implementation of a large US fiscal expansion. Yields are coming down because though global growth outlook is rosier, a fiscal driven boom may be too premature. Mr. Trump’s legislative agenda is likely to take time, if it gets passed at all, as is exemplified by the machinations of “repeal and replace” the Affordable Care Act.

The second, is that bonds are signalling that the Fed may go in, as scheduled, for two more rate hikes this year ( with the first almost a certainty during the June Federal Open Market Committee meeting) but will not rush to tighten more than needed lest it disrupts the current US growth trajectory. Carry returns of Asian EM currencies took a beating post-US elections, but remain positively slanted towards other developed countries’ currencies in Asia OR currencies of developed Asian countries. Bloomberg’s index of four Asian EM currencies’ (INR, IDR, PHP, THB) carry returns against USD dipped on 8 November 2016 but remained near their yearly high. The problem is that EM outflows could rise again if USD interest rates rise. One could argue that if EM yields rise in step then flows, on a net basis, will cancel out. However, by then the damage would already have been done.

Yields have not and should not return to pre-Trump levels. It looks as if the period of negative real interest rates is over. Remember bond yields had already been on a rising trend before Mr. Trump’s election. Yet, the recent rally especially in the EM space looks impressive. While I will not call this a ‘rebound’, it is nonetheless a re-look and re-pricing reflecting the current environment in growth, inflation and especially in politics. Also, the flatter UST curve compared with the steeper one back in December 2016 signifies a lower likelihood of reflation. 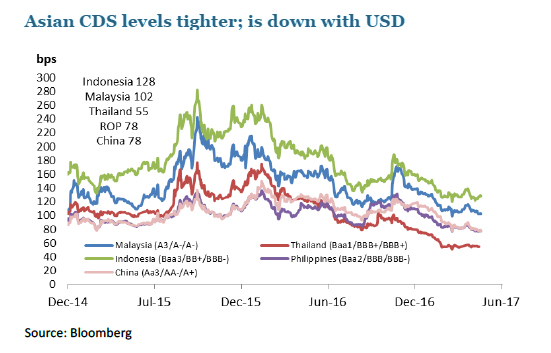 Tighter EM Credit Default Swap (CDS) levels, is partly due to a retracement of the USD. A stronger USD is generally negative for EM USD bond prices as it raises financing costs. The bond market is a more accurate reflection of the current environment than the rally in riskier assets. To us, the current downshift in yields is an intermittent gap in a longer term rebalancing between risk and the risk-averse. It’s certainly not an overnight ‘flip’ from bonds into stocks or the ‘Great Rotation’

To boot, portfolio inflows into EM debt markets in Dec 2016-Apr 2017 totaled USD65.0 billion compared to outflows of USD26.0 billion in Nov 2016. The anticipated ‘great’ outflow from EM to developed markets has lost its allure, and investors are back lapping up EM debt. 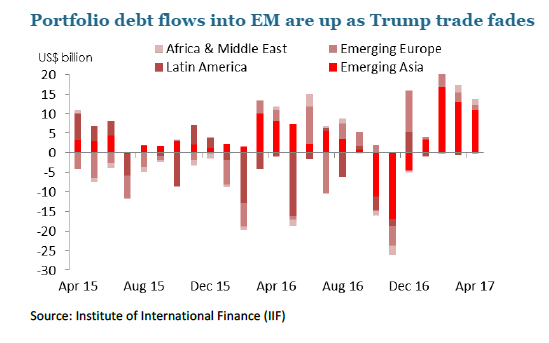 What happens next in bond markets will be driven by the following inter-related factors:

The continuing saga with “repeal and replace” of the Affordable Care Act calls into question the administration’s legislative agenda for the rest of the year. Changes in taxes and other policies may not materialise until much later this year.

These considered, I maintain an upbeat outlook on global bonds. Though I don’t think yields will return to pre-election levels, direction from this point on is that yields will move in a mixed manner, depending on the market and tenor of bonds. For instance, it is likely that UST yields will show an increase in the coming couple of quarters, in line with Fed hikes. However, the pace of rise in yields will be limited.

I maintain an upbeat outlook on EM as well, particularly in the ASEAN markets covered by CIMB. These markets are no longer loosening monetary policy, in part to stem possible outflows as the Fed hikes rates. I continue to like Indonesian, Thai and Malaysian bonds. The MYR recently strengthened, nearing 4.32 against the USD prompted by a relatively large inflow of RM6.0 billion into Malaysian bonds. In the meantime, I expect IDR bonds to strengthen in the short term with S&P recently upgrading the sovereign rating to investment grade. While inflation pressures have risen, they are mainly cost push and “manageable”. CIMB Treasury Research’s forecast for 10-year IDR government bond is in the range of 6.70-7.40% throughout 2017. Levels had moved between 7.00-7.60% since Jan this year. 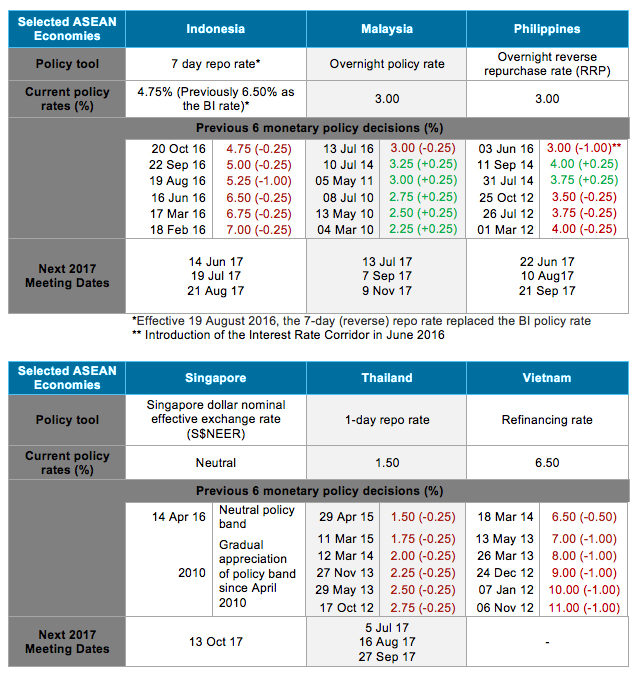