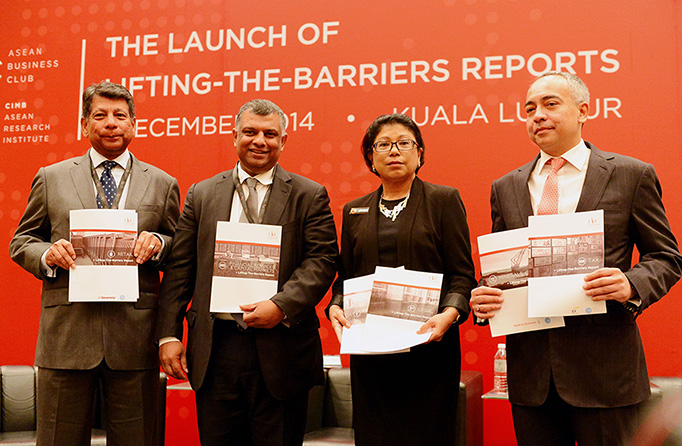 The reports recognise the potential benefits the AEC would bring but real sectoral challenges remain and are not likely to be fully overcome before the AEC 2015 deadline. In essence, the reports identified barriers such as economic nationalism, human capital constraints, regulatory congestion, and underdeveloped infrastructure as some of the main obstacles facing integration. The reports however also provided broad- based recommendations where these barriers could be overcome.

“It is important to focus on lifting the barriers. Otherwise, all our market access efforts would be futile, and economic integration, illusive,” said Datuk Dr. Rebecca Sta. Maria.

“The LTB reports are a gap analysis, but one which offers specific proposals on how to fill the gaps. As such they are a positive contribution to making the AEC a more meaningful economic reality. We will continue, through formal and informal means, to bring the findings and recommendations to the attention of policy decision-makers, top to bottom,” said Tan Sri Dr. Munir Majid.

The reports were also recently cited by the Malaysian Prime Minister YAB Datuk Sri Najib Razak as a useful private sector input which could be used by Malaysia, as the Chair of ASEAN 2015, to take stock on where and how to fill gaps between aspirations and reality.

“Businesses have a responsibility to make the AEC happen. There is no need to wait for a cue from governments. But mindsets must change: both businesses and governments have to transcend the national; embrace the regional. AirAsia did it. Everyone can too,” he said.

Dato’ Sri Nazir Razak, Chairman of CIMB Group and Co-Chair of ABC Malaysia stressed the need for Malaysia to capitalise on its upcoming chairmanship of ASEAN in 2015 to tie up any further loose ends before the establishment of the AEC.

“There are many challenges faced by ASEAN home grown multi-nationals and SMEs in anticipation of the impending formation of AEC. We hope that the recommendations highlighted in the two sets of LTB reports would be considered by the policy makers to produce effective policy prescription necessary for a single market and production base of ASEAN. 2015 is a critical year for ASEAN and I hope Malaysia’s chairmanship would see that final push towards that direction,” said Dato’ Sri Nazir Razak.

As an ongoing effort to engage with the public sector, the launch of the LTB reports was held in conjunction with ABC’s country visit to Malaysia. During this visit, ABC delegates had an opportunity to listen to Tan Sri Zeti Akhtar Aziz, Governor of Bank Negara Malaysia at a special networking luncheon hosted by CIMB Group. She shared on what the business community can expect from the impending financial integration for Malaysia and ASEAN. Another speaker, Tan Sri Rafidah Aziz, former minister of international trade and industry and currently Chairman of AirAsia X, gave her views on AEC and globalisation. The ABC delegates also had a dialogue with two ministers from Prime Minister’s Department, YB Senator Dato’ Sri Abdul Wahid Omar and YB Senator Dato’ Sri Idris Jala. The visit concluded with a special meet-and-greet session with Malaysian Prime Minister YAB. Dato’ Sri Najib Tun Abdul Razak later in the evening.

About Lifting-the-barriers Initiative 2014
Launched in 2013, the “Lifting-The-Barriers” (LTB) initiative is a yearlong joint effort by CIMB ASEAN Research Institute and ABC with a special focus on identifying bottlenecks and barriers hindering free trade of prioritised sectors in the context of the AEC.

Phase I of the LTB Initiative involves core research and compilation of qualitative and quantitative input as surveyed from within each of the six business sectors.

The outcome of Phase I are the seven sector-based Preliminary Papers, intended to spark discussion at the Phase II LTB roundtables during the ASEAN Business Club (ABC) Forum 2014 on 8th September in Singapore. The Roundtables have a vertical emphasis on issues specific to the selected sectors and serve as a platform for different stakeholders to deliberate on the future of their sector in ASEAN as a whole. Participants of this discussion include regulators, private sector leaders, service providers, manufacturers, academics and many more. The selection of discussants aimed to provide a well-rounded and truly reflective debate.

Phase III consists of the final outcome of Phase I and II, the Lifting-The-Barriers (LTB) Reports, as a set of white papers made available for the ASEAN public and policy makers for reference.

The final phase will see the findings of the reports being presented to relevant stakeholders in ASEAN to effect real changes and accelerate ASEAN integration efforts.

About the ASEAN Business Club
The ASEAN Business Club is a fully private sector driven initiative for ASEAN’s major home grown corporations to come together and fully engage in ASEAN’s integration efforts. Being the first regional business club with the aim of achieving regional integration, ABC aims to be the leading networking vehicle to form relationships across the region; thus serving as a platform to speak to each other across the ten ASEAN countries to identify challenges and areas of opportunity. It also aims to provide support and advocacy for governments to achieve an ASEAN Economic Community that will benefit its citizens.