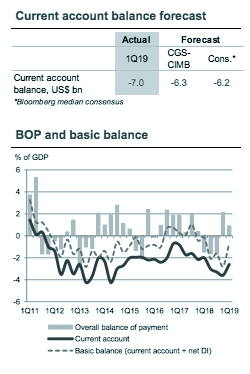 CA: Goods account rebounded on improvements in trade balance
A smaller travel surplus, due to lower average spending per tourist arrival, and lower income receipts on direct investment abroad threw our forecasts off. As expected, steeper declines in imports relative to exports resulted in the goods account rebounding to a surplus of US$1.1bn (US$2.6bn deficit in 4Q18) as well as a smaller deficit in freight services. Downside risks on CAD remain on the table amid rising external uncertainty due to the overhang of recent wedge in US-China trade negotiations as well as lower commodity prices, such as coal and palm oil.

FA: net inflows in direct investments and portfolio investments
Higher net direct investment inflows (+US$5.2bn in 1Q19 vs. +US$2.0bn in 4Q18) were sufficient to finance 74% of the CAD (vs. 22% in 4Q18), resulting in a smaller negative basic balance (-0.7% of GDP vs. -2.8% of GDP in 4Q18). The net direct investment inflows were supported by M&A activity in the banking sector while realised foreign investments (excluding banking and O&G) in US$ terms continued to decline, although we expect FDI to pick up in the coming quarters following Jokowi’s re-election for a second term, based on unofficial results. Net foreign portfolio inflows nearly halved (+US$5.4bn vs. +US$10.5bn in 4Q18) on the maturity of a global government bond in March 2019.

2019F CAD forecast raised to US$29.6bn/2.7% of GDP
We revise our 2019 CAD upwards to US$29.6bn/2.7% of GDP (vs. US$27.3bn/2.5% of GDP previously) to take into account weaker trade activity and lower average tourist spending. Given that the improvement in 1Q19 CAD fell short of Bank Indonesia’s (BI) 2.5% of GDP target, we expect BI to remain cautious regarding a reversal in its monetary policy rate, unless 2Q19 CAD remains under control. Historically, the CAD tends to be higher in 2Q due to seasonal factors, which coincides with dividend payment schedules. 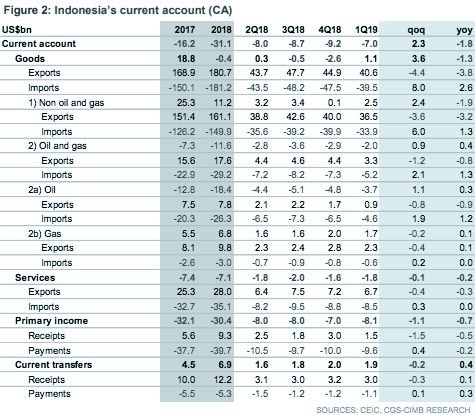 The current account deficit improved by US$2.3bn qoq to US$7.0bn/2.6% of GDP in 1Q19, the smallest deficit since 2Q18. Due to steeper declines in imports relative to exports in both O&G and non-O&G segments, the goods account balance returned to a surplus of US$1.1bn in 1Q19 after recording a deficit for two quarters. Weaker imports resulted in a smaller deficit in freight services but were outweighed by a smaller travel surplus and a higher deficit in other business services. The deficit in the services account rose slightly to US$1.8bn. The primary income deficit was higher at US$8.1bn due to seasonal interest payment on government debt as well as smaller income receipts on direct investment abroad as a result of narrower returns on overseas property investment. 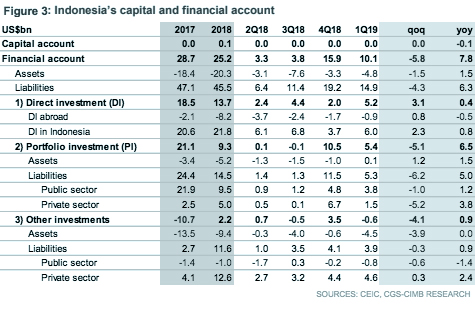 The US$10.1bn surplus in the financial account was supported by net inflows in direct investments and portfolio investments. Net direct investment inflows increased to US$5.2bn, driven by the acquisition of a local bank by a Japanese investor. Following more conducive global financial conditions, net foreign portfolio purchases of Indonesian equities and Rp-denominated government bonds were higher in 1Q19. However, net portfolio investment inflows were smaller at US$5.4bn as a result of government payments on global bonds that were due in Mar 2019 and lower issuances of global bonds by corporates in Indonesia. Other investments posted a net outflow of US$0.6bn on higher placement of private deposits at overseas banks and private lending to non-residents. 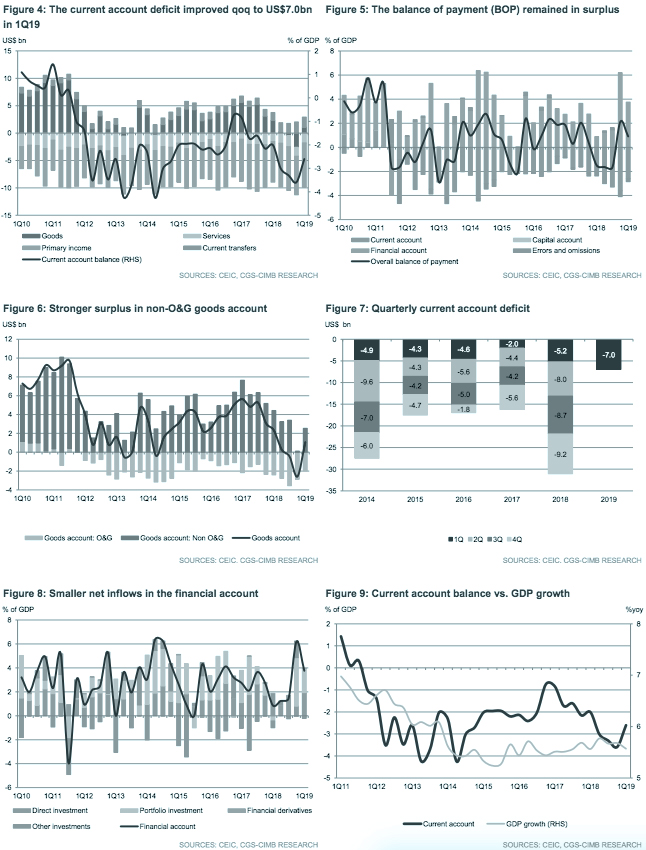 Originally published by CIMB Research and Economics on 13 May 2019.