Advancing ASEAN in the Digital Age 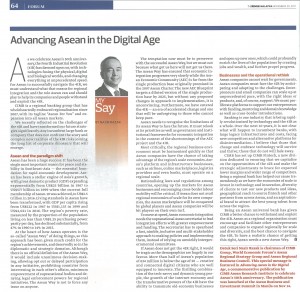 As we celebrate ASEAN’s 50th anniversary, the Fourth Industrial Revolution (4IR) has dawned upon us, with technologies fusing the physical, digital and biological worlds, and changing everything at unprecedented speed. For ASEAN to successfully navigate the 4IR, we must understand what that means for regional integration, and the role ASEAN can and should play to help its companies and people withstand and exploit the 4IR.

CIMB is a regional banking group that has wholeheartedly embraced regionalisation since 2007, with its tagline “ASEAN For You” and expansion into all ASEAN markets.

We recently reflected on the challenges of the 4IR, and have transformed our future strategies significantly. Any incumbent large bank or company that does not confront the scary and complex new realities of the 4IR risks joining the long list of corporate dinosaurs that will emerge.

ASEAN AND THE PARADIGM SHIFT

ASEAN has been a huge success. It has been the single most important reason for peace and stability in Southeast-Asia – the essential foundation for rapid economic development. ASEAN has been a stellar engine of Asia’s growth, with gross domestic product (GDP) expanding exponentially from US$23 billion in 1967 to US$577 billion in 1999 when the current full membership of ASEAN-10 was achieved, to US$2.55 trillion in 2016. Living standards in ASEAN have been transformed, with GDP per capita rising from US$122 in 1967 to US$1,135 in 1999 and US$4,021 in 2016. The region’s poverty rate, measured by the proportion of the population living on less than US$1.25 purchasing power parity per day, has reduced substantially, from 47 percent in 1990 to 14 percent in 2015.

At the heart of how ASEAN operates is the so-called ‘ASEAN Way’ of doing things, so this approach has been given much credit for the region’s achievements, and deservedly so in the diplomatic and strategic domains. Although there is no official definition of the ASEAN Way, it would include unanimous decision-making, allowing opt out or delayed participation in any initiative, prohibiting countries from intervening in each other’s affairs, minimum empowerment of supranational bodies, and denying legal enforcement powers for regional initiatives. The ‘ASEAN Way’ is not to force any issue on anyone.

The temptation now must be to persevere with the successful ASEAN Way, but we must not because what got us here will not get us there. The ‘ASEAN Way’ has ensured that economic integration progresses very slowly while the ASEAN Economic Community (AEC) is far from the single production base originally promised in the 2007 ASEAN Charter. The new AEC Blueprint targets a diluted version of the single production base by 2025, but without any proposed changes in approach to implementation, it is unconvincing. Furthermore, we have entered the 4IR – an era of accelerated change and one that will be unforgiving to those who cannot keep pace.

ASEAN needs to recognise the limitations of its ASEAN Way to face the future. It must re-look at its priorities as well as governance and institutional frameworks for economic integration in the context of the shortcomings of the AEC project and the 4IR.

Most critically, the regional business environment must be harmonised quickly so that ASEAN companies have the chance of taking advantage of the region’s scale economies. ASEAN’s platform and infrastructure businesses, such as airlines, online marketplaces, logistics providers, and even banks, must operate at regional scale.

Rationalising laws and regulations among countries, opening up the markets for ASEAN businesses and encouraging cross-border labour mobility will be critical. If ASEAN does not avail regional economies of scale for its own companies, the ASEAN marketplace will be conquered by global players, and ASEAN companies will be bit players on their own turf.

To move at speed, ASEAN economic integration needs the supranational ASEAN secretariat to lead integration efforts with greater empowerment and funding. The secretariat has to spearhead a fast, nimble, inclusive and multi-stakeholder approach to making policies and implementing them, instead of relying on unwieldy inter-governmental committees.

If ASEAN does not get the 4IR right, it would be tragic as the demographics are hugely in our favour. More than half of ASEAN’s population of 630 million is below the age of 30 – creative and connected digital citizens who are well-equipped to innovate. The thrilling combination of the tech-savvy and dynamic young people, the growth of the Internet economy and the transformative powers of the 4IR have the ability to transmute old-economy businesses and open up new ones, which could profoundly enrich the lives of the populations by creating jobs and wealth, and further propel progress.

BUSINESSES AND THE OPERATIONAL RE-THINK

ASEAN companies cannot wait for governments. ASEAN companies must face the 4IR by anticipating and adapting to the challenges. Entrepreneurs and small companies can scale up at unprecedented pace, with the right ideas or products, and, of course, support. We must proliferate platforms to support our entrepreneurs with funding, mentoring and domain knowledge, as well as cross-border introductions.

Banking is one industry that is being rapidly revolutionised by technology and the 4IR as a whole. Over the next 10 years, it is not clear what will happen to incumbent banks, with large legacy infrastructures and costs, facing new competitors and alternative platforms for disintermediation. I believe that those that change and embrace technology will survive and thrive; those that do not will fade away.

CIMB has set up CIMB Fintech, a new division dedicated to ensuring that we capitalise on the opportunities of the 4IR and make the strategic adjustments to brace for expected lower margins and wider range of competitors. Being a regional bank has helped our cause tremendously as we have the economies of scale to invest in technology and innovation, diversity of clients to test our new products and ideas, geographical reach to source fintech and other partners from across ASEAN, and an aspirational brand to attract the best young talents from across the region.

Being an ASEAN universal bank has given CIMB a better chance to withstand and exploit the 4IR. ASEAN as a regional organisation must encourage and facilitate other entrepreneurs and companies to expand regionally for scale and diversity, and the best chance to navigate the 4IR. To have a realistic chance of getting this right, ASEAN needs a new ASEAN Way.