Global flows of goods, services and finance are very different today than they were 10 years ago. The advancement of technology has changed the global landscape and how people do business. Relationship between employers, workers and government, known as industrial relations, is nothing new, but the AEC has just recognised the importance of nurturing this tripartite relationship to foster a healthy industrial environment to promote ASEAN’s competitiveness. These are examples of trends and issues that will be beneficial if ASEAN could take care of them properly. Continuous cross-sectoral dialogue and public-private partnership will be of the utmost importance in dealing with them, and possible other trends and emerging issues later on.

Global Megatrends and Emerging Trade-Related Issues
The rapid changes in world trade has encouraged ASEAN to include this new initiative in the AEC Blueprint 2025. The nature of global trade in both goods and services, as well as in foreign direct investments (FDIs), are now very different than it was a decades ago, prompting ASEAN to seriously take these into consideration when formulating their external economic strategies. The first pillar of the AEC Blueprint 2015, which is to establish the ASEAN region as a single market and production base, strongly remains in spirit in the new blueprint, under the first pillar of “a highly integrated and cohesive economy.” The components of a single market and production base, which include further and continuous liberalisation of trade in goods, trade in services, investment, greater cooperation in the financial sector, and facilitation of skilled labour movement across the region, are still very important components of the new blueprint. Therefore, emerging trade-related issues, has rightfully been included in the new blueprint as they will surely become important factors in shaping ASEAN’s future trade and regional economic policies.

This report has been prepared to provide some analysis on the aims at analyzing how this particular analysis can be beneficial for the AEC in the next period of implementation.

A. Targets under the AEC 2015 Blueprint
Global megatrends and emerging trade issues are a new initiative that was not yet a priority in the previous AEC Blueprint. Inclusion of this new priority in the new blueprint is expected to help ASEAN strengthen its trade policies and negotiations by taking into account new global trends that may significantly affect ASEAN’s way forward. 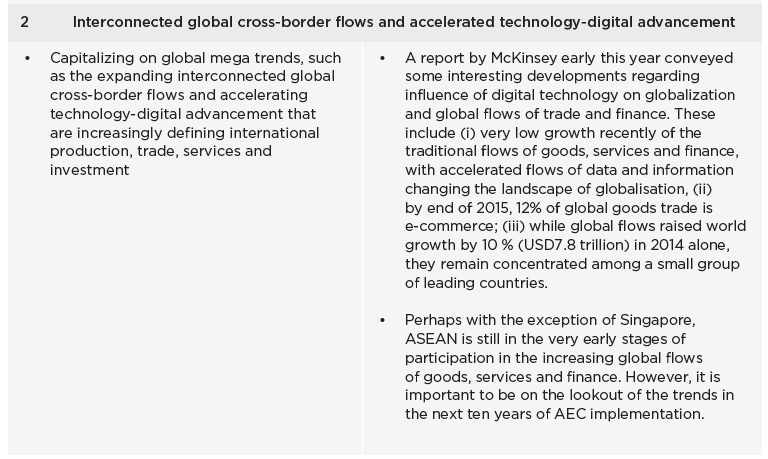 1 The table is taken from the Asia-Pacific Trade and Investment Report 2015: Supporting Participation in Value
Chains, UNESCAP
2 The 2014 Infrascope: Evaluating the Environment of Public-Private Partnerships in Asia Pacific, EIU, 2014