Development of Intellectual Property Rights (IPR) in ASEAN, despite the progress made, has not lifted most ASEAN Member States’ performance on the global scale. With the exception of Singapore and Malaysia, implementation in the other countries has been inconsistent, including allowing some extent of infringement of patents through issuance of compulsory licenses. The new AEC Blueprint 2025 is much more comprehensive in terms of the strategic measures to promote IP protection, but this must be supported by stronger cooperation among member states and with international partners, with more serious compliance by the relevant authorities.

Intellectual Property Rights (IPR)
Intellectual property has been defined by the World Intellectual Property Organization (WIPO) as
the creations of mind, such as inventions; literary and artistic works; designs, and symbols, names and images used in commerce. The WIPO also states that IP is protected by law in the forms of patents, copyright and trademarks, which would enable anyone to earn recognition or financial benefit from what they invent or create. A proper IP system promotes an enabling environment in which creativity and innovation can flourish through establishment of a right balance between the interests of innovators and the wider public interests.

As an increasingly important emerging economic region, ASEAN has been working to establish a
regional system that enables and promotes IPR as a factor that enhances ASEAN’s competitiveness
in the global economy. Proper protection of any sort of inventions would increase the value of and sentiment towards ASEAN as an economic region among global investors. It then makes sense that in the previous and new AEC Blueprints, IPR is placed as one important initiative that would both stimulate innovations and therefore enhance competitiveness of ASEAN.

A. Targets under the AEC 2015 Blueprint
The AEC Blueprint 2015 views IPR as a very important initiative to support the establishment of
ASEAN as a competitive economic region. Development of IP policies was aimed at stimulating

Under the AEC Blueprint 2015, measures to develop and integrate IPR policies and laws were guided by the ASEAN IPR Action Plan 2004-2010 and the Work Plan for ASEAN Cooperation on Copyrights. These were aimed at encouraging learning and innovation by businesses, investors, inventors and creators in the ASEAN region, and at the same time, improving public awareness, coordination and networking among the stakeholders. The prescribed actions for IPR under the AEC 2015 are as follows:

In the initial stages, implementation of the ASEAN IPR Action Plan was planned to start with studies that would focus on contribution of copyright system to economic development, implications of copyright system to the economy, best utilization by member states of the available flexibilities of various IP agreements including the Free Trade Agreements (FTAs), and collective management societies and copyright tribunals. The follow ups included collection of country reports on business development services (BDS), facilitation of development of copyright-based industries in member states and enhancement of those industries, and development and operation of online systems for copyright notifications and BDS networks. At the end, the expected outcomes would be effective use of copyright system and establishment of collective management societies in all member states.

The ASEAN Working Group on Intellectual Property Cooperation (AWGIPC) was established
in 1996 to implement the ASEAN Framework Agreement on Intellectual Property Cooperation
(1995), which was aimed at supporting the AEC pillar of ASEAN being an innovative and
competitive region, and at the same time, ensuring that ASEAN remains active in the international IP
community.

The ASEAN Patent Examination Cooperation (ASPEC) was launched in 2009 as the first regional
patent work sharing programme among nine ASEAN IP Offices: Brunei Darussalam, Cambodia,
Indonesia, Lao PDR, Malaysia, Philippines, Singapore, Thailand and Viet Nam. ASPEC serves as a
platform to share search and examination results to allow countries to find corresponding patents in a more efficient and timely manner. In 2013, the ASPEC programme was enhanced to include additional benefit of processes at IP Offices advanced out of turn until grant when a request is filed. In 2015, ASPEC went online and requests to all participating IP Offices can now be made through the ASEAN IP portal.

The ASEAN IP Offices have also launched the Common Guidelines for the Substantive
Examination of Trademarks. The Common Guidelines is aimed at enhancing the quality and
transparency in the procedure that involves evaluation of the contents of a trademark applicationto ensure that the trademark can be registered subject to a set of criteria consisting of absolute and relative grounds. The principles and standards may be applied regardless of how each IP Office conducts the examination process according to its domestic laws. This is to ensure a higher level of consistency, transparency and efficiency in the examination and decision making.

The ASEAN TM View trademark database is an online platform that allows users to obtain data on
recorded trademarks in the ASEAN region. As of end of 2015, more than two million trademark
applications and registrations that took effect in participating member countries were recorded. The database provides a good source of reference for anyone wishing to find out if a brand is already taken or used. ASEAN businesses can greatly benefit from the services provided by the ASEAN TM View.

Analysis on Progress in Member States

Despite those initiatives, development of IP policies and laws in the ASEAN is still varied with the most developed country way ahead of the rest in terms of protection of property rights. Oplas Jr (2016) made some interesting observations on the progress of IPR developments in selected ASEAN member states. Based on the International Property Rights Index (IPRI) for 2008-2015 produced by the Property Rights Alliance (PRA), he analysed how six ASEAN member states have performed in promoting IPR in their respective jurisdictions.

The IPRI scores are basically made up of the how the countries performed in three areas:

The results can be summarized as follows: 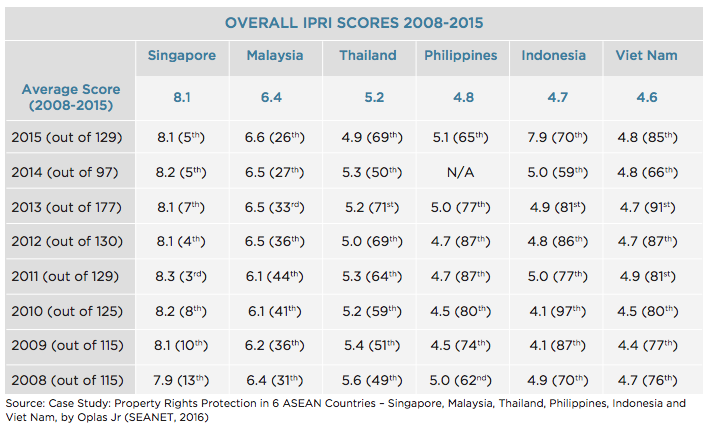 Oplas Jr’s observation is that some member states have actually declined in their performance for the course of 2008 and 2015. According to him, 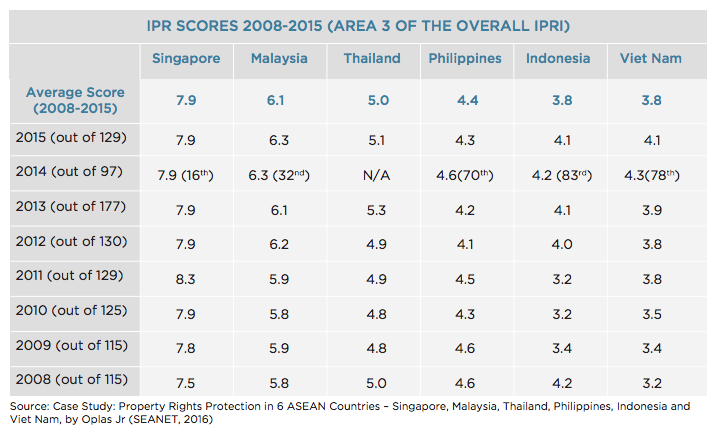 Oplas Jr noted that in 2014, Singapore was ranked 16th globally on the IPR component despite
being ranked 5th for overall IPRI. In Singapore and other member states, IPR is a relatively new
concept in public policy. IPR protection was not being strictly implemented in some member
states. For example, during the last decade, Indonesia and Thailand issued a number of compulsory licensing, which allows some form of infringement of a patented product, of patented medicines.

Free Trade Agreements (FTAs) and Economic Partnership Agreements (EPAs) with more
developed economies have added pressure for ASEAN to exercise IPR protection. In most
member states, improvements can be seen between 2013 and 2014.

C. Current Issues and Challenges
Despite most member states already having IPR laws and policies in place, the younger member
states of ASEAN, namely Cambodia, Lao PDR and Myanmar still lack proper IPR legislations.
Improving cooperation towards developing IPR legislations and their enforcement could provide
significant assistance to those three countries in getting in par with the other member states.

Implementation of IPR protection has been quite patchy with some member states still allowing
for infringement of patents through issuance of compulsory licenses. (Oplas Jr, 2016)

The Agreement on Trade-Related Aspects of Intellectual Property Rights (TRIPS) by the WTO sets down minimum standards for many forms of IP regulation as applied to nationals of other WTO members. In the case of ASEAN, all member states are signatories of the TRIPS Agreement. The agreement allows for IPR to be adjusted to the country’s level of development. While in principle protection standards may be uniform, the enforcement does not have to be uniform, and harmonizing both rules and enforcement is very difficult, even in a more advanced single market like the EU. In the absence of a harmonized system, the flow of foreign direct investment may be lower than if a harmonized system is in place. (Lall and McEwin, 2014)

D. Plans under the AEC 2025 Blueprint
The AEC Blueprint 2025 recognises that implementation of IPR initiatives is critical in increasing the role of ASEAN technology in economic development, promoting transfer of technology, and stimulating innovation and creativity. For the period of 2016-2025, IPR will play a greater role in supporting the regional development, and in improving the competitiveness of ASEAN. Therefore, IP Offices in member states need to achieve technical and procedural convergence and adopt modern business models and practices to be able to provide quality services to the relevant stakeholders.

As the next phase from the previous blueprint, the strategic measures in the new blueprint
are more detailed in terms of what needs to be developed and implemented, covering issues
related to further development of the IP Offices, development of IP platforms and infrastructure, expansion of IP ecosystem, and enhancement of mechanisms to promote asset creation and commercialization.

F. Conclusion: Moving Forward with the AEC 2025 Plans
IPR is a relatively new initiative and the implementation of the strategic measures under the AEC Blueprint 2015 was quite patchy, despite the important progress made, as shown by the global ranks of member states under the IPRI. Closer cooperation among member states and with the WIPO
would ensure that the implementation of the next phase (2016-2025) would be consistent with
international best practices, supported by accession to the international agreements and protocols by ASEAN members.

The ASEAN IP Portal will have to be continuously updated to support the utilization of ASPEC so
that stakeholders will benefit more from the information provided. Improvement of the capacity of the IP Offices is imperative in ensuring that IP protection can be enforced properly to attract more investors to do business in ASEAN.

A proper IP ecosystem needs to be nurtured further to ensure that all relevant government
authorities and other stakeholders (private sector, IP associations, universities, research institutes) can establish a mutual relationship to support IP enforcement in the region.