Productivity based on innovation and technology now has become a priority in ASEAN to enhance its global competitiveness. This requires strong partnership between those involved in developing science and technology through research and development, protecting intellectual property rights, and promoting education in the ASEAN region. Currently, there is a very large gap between the older members of ASEAN and the newer ones, resulting in significant difference in productivity levels across the region. Promoting one ASEAN as a single production base requires that this issue be addressed urgently.

Productivity-Driven Growth, Innovation, Research And Development and Technology Commercialisation
ASEAN has now put a greater priority on productivity, innovation, technology and research and
development (R&D) to improve its competitiveness in the global market. These are deemed important
components that must be further developed and nurtured if ASEAN wishes to compete in the global
scale. These priorities cut across many different sectors or initiatives under the AEC such as global
value chain, MSME development, science and technology, and intellectual property rights (IPR). Almost
all stakeholders of the AEC will enjoy the benefits if ASEAN member states are able to implement the
measures and therefore improve their capabilities in promoting innovation and technology to improve
productivity. This report aims at providing some useful information on ASEAN’s strategy to increase
productivity through innovation and technology, and how the stakeholders may take advantage of it.

A. Targets under the AEC 2015 Blueprint
This particular section was not separately outlined in the previous AEC blueprint. The words
“productivity” and “innovation” were not explicitly used, but implicitly under the ASEAN Socio
Cultural Community (ASCC), the measures on “advancing and prioritizing education” and “advancing
human resource development” implied that improvement of education and knowledge would lead to better quality of ASEAN human resource. Promotion of technology was not only under AEC, but also ASCC. Development and promotion of information and communication technology (ICT) were outlined under both pillars. Initiative on science and technology was under the ASCC in the previous blueprint, but is now under AEC in the new blueprint.

Given that the AEC Blueprint 2015 did not outline specifically ASEAN’s priorities on productivity,
innovation and technology per se, there were not any measured targets to be achieved by the end
of 2015.

ASEAN Achievements
Given that the AEC Blueprint 2015 did not specifically outline ASEAN’s priorities on productivity,
innovation and technology per se, there were not any measured targets to be achieved by end of 2015.

However, some indications on the productivity per worker in each ASEAN member state can be
described in the following table: 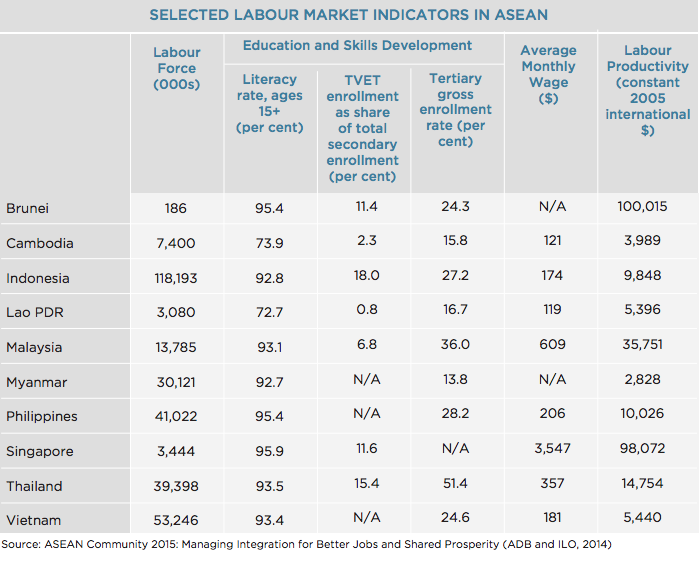 As the table indicates, the ASEAN labour markets differ significantly in terms of supply, skills,
wages and productivity. In terms of enrollment in technical and vocational education and training
(TVET), most have not reached sufficient level. The same story goes for university level education.
Average monthly wages are high only in Singapore and to a certain extent, Malaysia. In most other
countries, the wage level is still low.

There seems to be a positive correlation between productivity (output per worker per year) and
the skills of the labour force.

C. Current Issues and Challenges
The productivity levels across the ASEAN member states vary quite widely. While this can be
attributed to the different sizes of labour force, skills and education levels do play a role, as shown
in the positive correlation between productivity and skills levels.

In most ASEAN member states, the economies are still labour intensive. Development of proper
innovation can be useful in improving productivity, without technology replacing the roles of labour
force. The challenge then is to enhance productivity while still creating job opportunities for the
work force. This would require development of the right technology to fit the condition of the
ASEAN economic structure.

D. Plans under the AEC 2025 Blueprint
Under the AEC Blueprint 2025, greater priority is now given to increasing productivity through
further investment in R&D to promote innovation so that the ASEAN human resource can be more
competitive, especially if ASEAN wishes to strengthen its position within the value chain of the
global production network. If ASEAN is able to fully implement the agreed strategic measures,
there is a great chance that its global competitiveness could make a giant leap ahead of the other
economic regions. 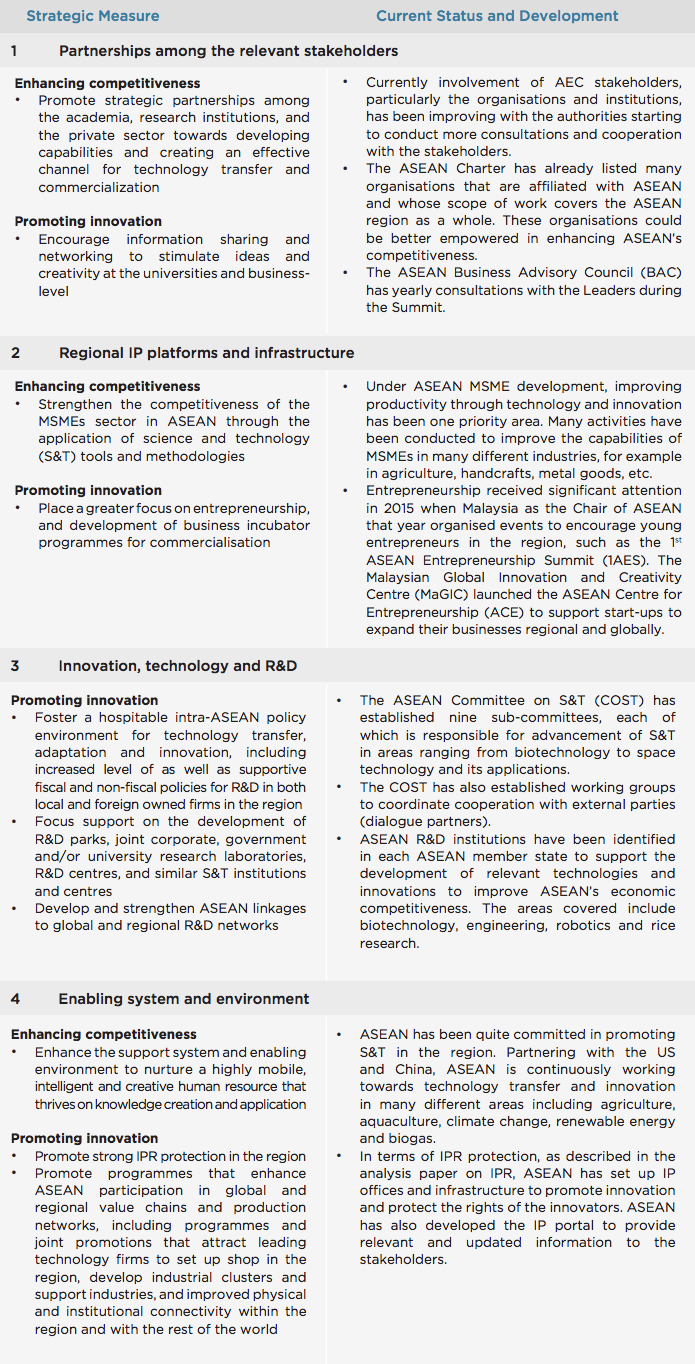 F. Conclusion: Moving Forward with the AEC 2025 Plans
The large gaps among ASEAN member state in terms of economic development have had direct
consequences in the productivity levels across the region. In countries where the productivity is
high, the skills level is also above that of other member states. It is then very important to further
encourage higher participation in the education system, all the way to higher education, and
continuously improve the general quality of education at all levels.

The link between R&D and quality of education is clear. Research oriented institutions would have
higher quality of education. The mutual relationship must continue to be nurtured. A more intensive
R&D also contributes to the advancement of technology and innovation, particularly if it is linked
and matched with the demand from the relevant parties, such as MSMEs and larger industries, which
will in turn lead to higher productivity. Development of technology and innovation must take into
account the facts that most economic sectors in ASEAN are still labour intensive and that jobs must
continue to be created for the increasing size of workforce.

Given that the AEC Blueprint 2025 has put a priority on productivity, innovation and technology,
the relevant government authorities – those in charge of education, R&D, IPR, S&T, and industry –
must start to communicate and cooperate with each other to improve ASEAN’s competitiveness. In
addition, involvement of the stakeholders must be improved to achieve the desired goals of the blueprint.

Although the ASEAN BAC has conducted annual consultations with the Leaders at the Summit, this
kind of engagement needs to be enhanced in terms of length and quality of discussions to ensure
that the private sector’s voice is taken into account in the formulation of ASEAN regional economic
policies. It would also be useful to expand the consultations to the senior officials and technical
levels so that the public-private dialogue could work better especially in the implementation part
of the policies.