Good governance has been identified as a new priority by ASEAN to improve its competitiveness. The Corporate Governance Scorecard by the ASEAN Capital Market Forum (ACMF) seems to be the only effort by an ASEAN sectoral body to measure governance quality in the region. ASEAN urgently needs to develop their criteria for good governance for both the public and private sectors so that they are able to identify the gaps and take the necessary actions. Especially for the government sector, the challenge is to improve transparency, fight corruption, and engage the private sector more in the decision makings.

Taxation Cooperation
Taxation is one area that directly affects businesses and individuals in making their strategic decisions. How ASEAN levies taxes will affect how businesses and investors view the business and investment climate in the region. It is then important that as ASEAN member states aim to create a single market and production base, they are also working to ensure that the tax rates are fairly competitive without resulting in a “race to the bottom” with countries ending up competing with each other, rather than working together as a region. At the same time, given the higher dependence of ASEAN member states on their tax revenues, the tax rates must ensure fiscal health to the economies.

The challenge therefore is to formulate taxation policies and rates that could not only improve ASEAN’s global competitiveness but also maintain ASEAN’s fiscal health. Since taxation policies are very crucial to the government’s finances, and therefore the whole economy, ASEAN must make sure that the outcomes of the cooperation will benefit all member states without exception. Taxation cooperation is outlined in both blueprints and is considered very important in promoting ASEAN as an investment destination among global and regional investors.

A. Targets under the AEC 2015 Blueprint
Under the AEC Blueprint 2015, was already considered important in supporting ASEAN’s competitiveness. However, taxation also directly affects the countries’ economies, and therefore it was agreed that any form of cooperation should not put any country in any form of fiscal problems, and that each country would participate based on its readiness. The previous blueprint outlined only one measure which would be the foundation of the other forms of taxation cooperation. It was expected that during the period of 2008-2015, ASEAN member states would commence efforts to complete the network of bilateral tax agreements to address the issues of double taxation among them. Given the nature and importance of taxation as mentioned previously, member states were expected to complete the network of agreements to the extent possible. The commitment under the previous blueprint was relatively loose, taking into account the nature of taxation and the different levels of development among the ASEAN members.

However, there was another measure related to taxation in the blueprint but it was not under taxation cooperation. In the effort to strengthen ASEAN capital market development and integration, one strategic measure was to enhance withholding tax structure, where possible, to promote the broadening of investor base in ASEAN debt issuance. As a matter of fact, taxation cooperation may also benefit other economic sectors, particularly those that are directly cross-border in nature such as cross-border portfolio investment, cross-border movement of skilled labours, etc. These sectors or sub-sectors could grow at a faster rate if ASEAN is able to address the issues of double taxation and withholding taxes.

ASEAN Achievements
Despite the fact that the AEC Blueprint 2015 was formulated prior to 2008, the ASEAN Forum on Taxation (AFT) was only established in 2011 and had its first meeting that year. Since then, almost all ASEAN members have participated in the negotiations to establish bilateral tax agreements on double taxation.

By end of 2015, ASEAN member states have negotiated, concluded and signed bilateral agreements among them. However, the process are still continuing with more agreements to be negotiated and signed. It is expected that through these negotiations, the different tax regimes in ASEAN would eventually converge. 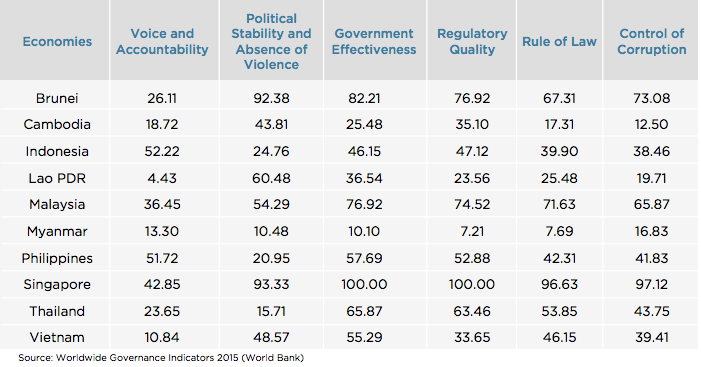 C. Current Issues and Challenges
The current tax landscape in ASEAN1 makes it very challenging to pursue deeper cooperation in tax issues. Each member state now has different tax system, with six of them adopting worldwide systems and the other four adopting territorial tax systems. The complexity arises from the number of taxes, tax rates, tax bases, and cost of complying with tax laws. Another huge challenge comes from the varying tax administration across ASEAN, with different rules and regulations that have proven difficult for businesses and investments to conduct cross-border activities as they have to deal and comply with different settings when entering a different jurisdiction.

Tax harmonization, while this may sound desirable, is very difficult in practice. ASEAN member states have been quite reluctant in using the term “harmonization” as the explicit objective of the taxation cooperation. While they are committed to aligning their tax regimes, they prefer that the commitments are loose and not binding.

Given that taxation and fiscal policy in ASEAN is still very much a domestic prerogative, ASEAN taxation cooperation will likely take place in a slow, cautious manner, making sure that the progress is not endangering the government’s finances. While this is understandable, more can be done in terms of involving the relevant stakeholders to help with the direction of the cooperation. Feedbacks from and consultations with the stakeholders can be useful in shaping the alignment of the tax regimes so that it can promote cross-border economic activities while ensuring the government’s fiscal health.

Since the commencement of the ASEAN taxation cooperation in 2011, not all member states have participated in the discussions and negotiations. Creation of an ASEAN single market and production base will not be complete without alignment of all tax regimes in the ASEAN region.

D. Plans under the AEC 2025 Blueprint
Since ASEAN started its cooperation in taxation, the discussions on the coverage of work of the AFT has expanded beyond completion of ASEAN bilateral tax agreements on double taxation. While the negotiations and completions of bilateral agreements are ongoing, member states have initiated discussions on other related areas under taxation. These new areas are included in the new Blueprint 2025.

While ASEAN member states still prefer a looser, less binding kind of commitment, they have explored other areas for discussion under taxation for the period of 2016-2025. The new initiatives include base erosion and profit shifting (BEPS) to address the issues surrounding transfer pricing and tax avoidance, global taxpayers’ identification number (TIN), and excise tax.

The strategic measures under the AEC Blueprint 2025 include:

F. Conclusion: Moving Forward with the AEC 2025 Plans
Despite being included in the AEC Blueprint 2015 as an important sector to improve ASEAN’s competitiveness, the ASEAN taxation cooperation did not take off until 2011. If this had taken place earlier, more could have been achieved by now.

Given that tax policies are very important and can affect the country’s fiscal health, each ASEAN member state has been very cautious in participating in the taxation cooperation. This may be understandable, but perhaps consultations with the relevant stakeholders or at least getting inputs from the stakeholders could help with the direction of the cooperation.

Member states should expedite the process of negotiating, concluding, signing and ratifying the bilateral tax agreements as more other sectors under the AEC with cross-border activities will benefit from those agreements, especially with regard to addressing the double taxation matter and enhancing the withholding tax structure. In that regard, it would be useful for ASEAN members to provide assistance to each other, particularly to those who still have many more negotiations to engage in.

Continuous evaluation on the signed bilateral agreements would be useful for improvements and inclusion of new components that may positively affect the effectiveness of the agreements.

Continuous and expedited discussions on (and later implementation of) exchange of information, including automatic exchange, will provide greater transparency on transactions and the types of incomes (dividends, interests, salaries, etc.) that are earned. This will give greater certainty to the market on what tax policies that will be enforced.

The other new initiatives – BEPS, TIN and excise tax – could also benefit from regular consultations with the relevant stakeholders, particularly inputs from businesses that may be the subject of the regional tax policies will be useful in the discussions by the authorities.