It is known that the existing regulations across the ASEAN region has not been very supportive of the realization of the AEC. Therefore the new AEC Blueprint 2025 has addressed this issue and included it under the second pillar to achieve competitive, innovative and dynamic ASEAN. Enormous efforts are required here, particularly by the regulators in streamlining the regulations and improving the good practices, and in involving the relevant stakeholders along the process to ensure achievement of desired outcomes.

Effective, Efficient, Coherent and Responsive Regulations, and Good Regulatory Practice (GRP)
Achieving the goals of the AEC requires many supporting factors. Regulations that can highly support the economic integration process would be a very important component that is crucial in providing explicit guidance on how the integration should take place based on the agreed new blueprint. Good regulatory practice (GRP) would ensure consistent adherence to the agreed regulations to support trade, investment and other economic cooperation across the region. This initiative has been included in the AEC Blueprint 2025 because closer partnership between the public and private sectors can only be facilitated if all the relevant stakeholders are guided by effective, efficient, coherent and responsive regulations, and if they can implement GRP to ensure fairness and transparency in their activities. This report aims at analyzing how ASEAN has progressed in this area, despite not having it specifically in the previous blueprint, and at providing some useful information on ASEAN’s strategy to promote quality regulations and GRP.

A. Targets under the AEC 2015 Blueprint
Effective, efficient, coherent and responsive regulations, and GRP were not included in the previous blueprint. These are new priorities that are expected to provide consistent guidance to the implementation of AEC strategic measures and improve fairness and transparency in the whole process. Successful implementation of these initiatives would encourage greater confidence within the business sector in the AEC.

B. Significant Achievements To Date
Given that the AEC Blueprint 2015 did not specifically outline effective and efficient regulations and GRP as ASEAN priorities, there were not any measured targets to be achieved by end of 2015. However, some progress in this area has been achieved the improving standard and conformance of goods and services to further facilitate trade in the ASEAN region.

The ASEAN Consultative Committee on Standards and Quality (ACCSQ) has been working towards harmonizing national standards with international standards and improving conformity assessment through mutual recognition arrangements to achieve a standard that can be conformed to one test and therefore can be accepted everywhere. Currently, harmonization of standards has been accomplished for 20 priority products and 81 standards for safety and electromagnetic compatibility. Priority for harmonization is given to standards used in technical regulations in member states. However, new areas are being explored and identified.

Mutual recognition arrangement (MRA) for electrical and electronics was signed in 2002. Member states have notified their participation in the MRA through product certification. The agreement on ASEAN Harmonized Cosmetic Regulatory Scheme was in 2003. The first part of the agreement is an MRA that enables the signatories to recognize the product registration approval of any signatory based on the agreed rules and regulations. The second part of the agreement is the ASEAN Cosmetic Directive which requires cosmetic products comply with existing regulations in member states. On pharmaceuticals, the ACCSQ has developed the ASEAN Common Technical Dossiers (ACTD), a marketing authorization dossier that is common to all member states, and the ASEAN Common Technical Requirements (ATCR), which is a set of materials to guide applicants in preparing application dossiers that is consistent with requirements of the all ASEAN Drug Regulatory Authorities.

To disseminate the latest updates and information, the ASEAN Standards and Quality Bulletin has been regularly published.

The ACCSQ has also promoted GRP through the development of the ASEAN Good Regulatory Practice Guide, which contains details on the principles of GRP. The guide is aimed at helping member states in meeting international standards of the World Trade Organization (WTO) Technical Barriers to Trade Agreement, and their own commitment under the ASEAN Framework Agreement of the integration of priority sectors.

ASEAN and the Organization for Economic Cooperation and Development (OECD) have established the ASEAN-OECD Good Regulatory Practices Network (GRPN) aimed at providing assistance to member states in strengthening capacity for GRP implementation through exchange of good practice and information among ASEAN and OECD member states. The GRPN was launched in March 2015 and has conducted two meetings to discuss the way forward in ASEAN’s efforts in implementing the GRP. The two meetings were attended by Senior Officials from ASEAN and OECD member countries who exchanged their ideas, assessments and recommendations on implementing and improving regulatory practices.

Several country experiences in regulatory reform can be described as follows1:

These updates describes the efforts undertaken by member states in improving their regulatory practices. The World Bank2 has come up with indicators to measure how introduction, implementation and evaluation of regulations have embraced the principles of transparency, public participation and government accountability. In the study, 13 questions are asked to the relevant stakeholders to get their views and opinions on whether or not the government have conducted the proper procedures on introducing, implementing or enforcing, and evaluating the effectiveness of regulations. Those 13 questions represent the stakeholders’ perception in terms of transparency of rulemaking, public consultation of rulemaking, impact assessment of the rules, opportunities to challenge regulations, and convenience in accessing laws and regulations.

The outcomes of the study on ASEAN member states are summarized in the two tables below. The first table contains the list of questions, and the second explains the stakeholders’ responses. 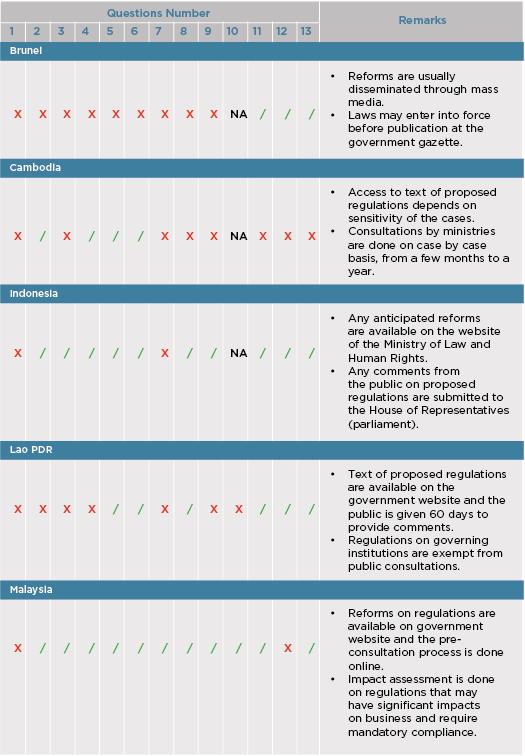 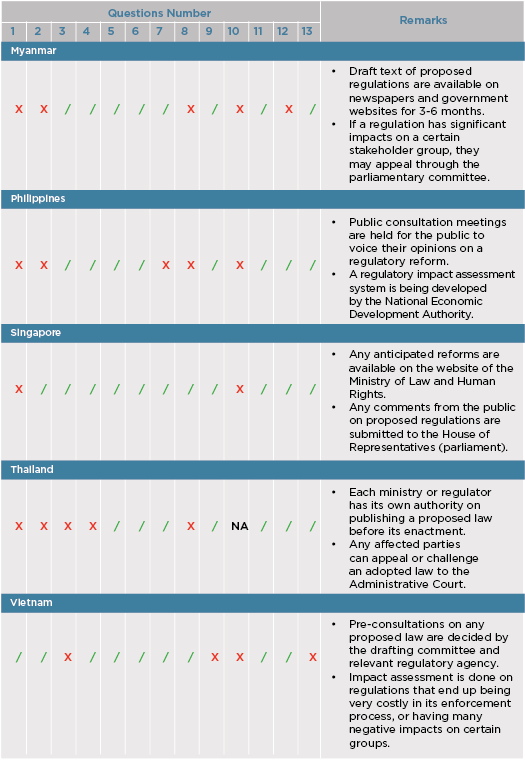 To different degrees, ASEAN member states have made significant efforts in the five categories of regulatory governance. Indonesia, Malaysia and Singapore seem to be leading in ensuring that the general public is consulted before a certain regulation is enacted and in assessing the impacts, if need be. Most countries have done well in terms of providing access to the laws and regulations through their adopted means of codifying and disseminating them to the public. Stakeholders in Brunei Darussalam seem to be expecting greater transparency and involvement in the initial process of proposing or amending a regulation.

C. Current Issues and Challenges
There are still huge gaps across the ASEAN region in terms of regulations, not only across different member states but across economic sectors. The challenge is to converge the different regulatory systems and improve their effectiveness and coherence to promote easiness of doing business in ASEAN.

The second challenge has to do with the mechanism of implementing and revising the existing laws and regulations. An example is the implementation of the Blue Card Scheme under Protocol 5 of the ASEAN Scheme of Compulsory Motor Vehicle Third-Party Liability Insurance. The protocol has been signed by the ASEAN Finance Ministers in 2001 and ratified by all member states. However, the implementor of the protocol is the ASEAN Council of Bureaux, which consists of National Bureaus from all member states. These national bureaus are the operators of motor and road accident insurance providers, who come from the general insurance industry. The implementation of the protocol has been hindered by the absence of the regulators in the meetings and negotiations, and therefore the much needed changes in insurance and other related regulations have not been addressed.

D. Plans under the AEC 2025 Blueprint
The AEC Blueprint 2025 outlines ASEAN’s priorities on positive impacts that effective and efficient regulatory environment and GRP can have on the economy, particularly the market and market players. The challenge is to ensure that the regulator reform address the existing problems faced by businesses in the region. One important point made in the blueprint is the need to develop responsive ASEAN through improved governance, greater transparency in the public sector, and more intensive engagement with the private sector.

Strategic measures to promote better regulations and regulatory practice in ASEAN include:

F. Conclusion: Moving Forward with the AEC 2025 Plans
While individually each ASEAN member state has done their reforms and impact achievement for more efficient, effective and coherent regulations and for better regulatory practice (with assistance from international partners, most notably the OECD), closer cooperation among member states would be very useful to make concerted efforts to further reform their regulations in the direction of convergence of the different regulatory landscapes that would significantly raise ASEAN’s global competitiveness and support the ASEAN single market and production base mechanism. This should also include development of common regional targets and milestones that are agreed upon by all member states to guide them in the implementation process later on.

This generic model could be adopted by ASEAN in the cooperation to ensure that the process involves all relevant stakeholders to achieve the desired outcomes.

Since the AEC Blueprint 2025 clearly mentions the need for regular consultations with the private sector and other relevant stakeholders to achieve the end result that is beneficial for everyone. The challenge now for ASEAN is how to develop and institutionalize a mechanism for closer consultation and cooperation between the regulators and stakeholders. Singapore has proven that more intensive consultations result in higher quality of regulations being issued. There is then an urgent need to develop greater trust among the relevant parties to achieve the desired objectives.