AEC Blueprint 2025 Analysis: Paper 17 | An analysis of the ASEAN cooperation in transport

Transport cooperation plays a very important role in realizing a more integrated and cohesive ASEAN, promoting the region’s economic competitiveness, enhancing sectoral cooperation, and bridging ASEAN with the global economy. To really achieve a comprehensive cooperation in the transport sector, member states need to look into harmonizing their transport regulations, secure financing for the development, and consider the environmental impacts of more rapid development. Nonetheless, greater transport cooperation will enhance connectivity across ASEAN that is crucial in supporting trade and investment, and promoting ASEAN’s competitiveness in attracting foreign businesses into the region.

ASEAN Transport Cooperation
Currently, connectivity is one of the most prominent issues that are shaping the future of the AEC. Given the geographical proximities of ASEAN member states, transport cooperation plays a very important role in realizing a more integrated and cohesive economic region, in promoting ASEAN’s competitiveness, in enhancing sectoral cooperation, and in bridging ASEAN with the global economy. In the new AEC Blueprint 2025, the ASEAN transport cooperation is officially housed under the third pillar of the AEC, which is a new pillar not covered in the previous blueprint, called “enhanced connectivity and sectoral cooperation.” The establishment of connectivity as its own pillar shows how imperative it is as a major factor that would contribute significantly in achieving the objectives set out in the other AEC pillars. Transport, together with the other sectors supporting connectivity, plays a pivotal role in facilitating trade, investment, finance and skilled labour across the region.

This report has been prepared to provide some analysis on the importance of connectivity and infrastructure and how transport contributes to improving the connection within a member state, among member states and across the economic sectors in ASEAN.

The ASEAN Transport Action Plan (ATAP) 2005-2010, which guided the ASEAN cooperation on multi-modal transport and transport facilitation, covers the three modes of transport: land, maritime and air transport. The actions involved in the action plan that were expected to be completed by 2010 include:

The focus on land transport cooperation was on the completion of the Singapore-Kunming Rail Link (SKRL) and the ASEAN Highway Network (AHTN) projects. The major measures involved include:

On maritime and air transport, the priorities included adoption of the general principles and framework for an ASEAN Single Shipping Market (ASSM), and development and implementation of the ASEAN Single Aviation Market (ASAM), to be carried out through the following measures:

In November 2010, the 16th ASEAN Transport Ministers (ATM) Meeting adopted the next phase action plan (2011-2015), called the ASEAN Strategic Transport Plan / Brunei Action Plan (BAP). The BAP identified the strategic actions and measures that would serve as the main guidance to the ASEAN transport cooperation up until 2015. With the adoption of the BAP, member states would continue their commitments to implement the necessary strategic measures to achieve the objectives of developing an efficient, secure and integrated transport network in the region, and enhancing transport facilitation, logistics services, and multimodal transport infrastructure linkages and connectivity, as mentioned above. 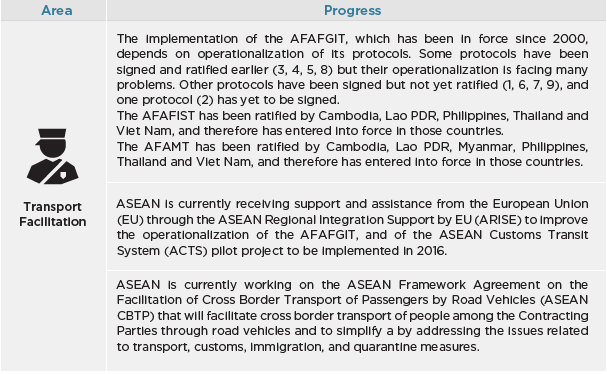 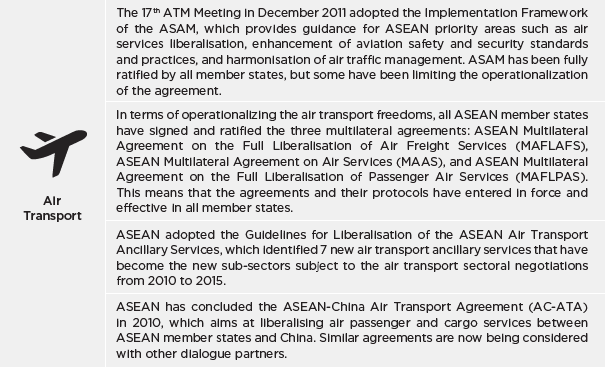 From economic point of view, better quality infrastructure is beneficial to improve ASEAN’s readiness to become more integrated and cohesive as a single market and production base, by significantly reducing transportation cost and improving logistics deliveries. However, from environmental point of view, this may result in higher congestions and pollutions, which may suggest that focus should be geared towards environmentally friendly means of transportation.

In some cases, member states are still not able to reach an agreement on the issues that are hampering the conclusion of transport negotiations, for example Protocol 2 of the AFAFGIT on establishment of frontier posts have not been signed because some countries have not yet agreed on the terms.

Financing may be an issue for some countries on the completion of the transportation projects.

D. Plans under the AEC 2025 Blueprint
As mentioned before, in the new blueprint, connectivity is now a pillar of the AEC, considering its importance in integrating the ASEAN economies and connecting ASEAN with the global economy. Developing quality transport facilities across ASEAN is imperative in ensuring that establishing ASEAN as a single market and production base, and enhancing its competitiveness can happen according to the agreed timeline.

The Brunei Action Plan has been replaced by the Kuala Lumpur Transport Strategic Plan (KLTSP) which was adopted by the 21st ATM Meeting in November 2015. The document aims at supporting the regional economic development and integration through enhanced land, air and maritime transport in the next ten years. It also aims at pursuing the development of sustainable transport and enhancing ASEAN’s connectivity with China, Japan and Korea.

Strategic measures for transport cooperation for 2016-2025 include:

i. Land transport aims at establishing an efficient and integrated regional transport network within ASEAN and with neighbouring economies by following the key measures:

ii. Air transport focuses on strengthening the ASAM by implementing the measures:

iv. Transport facilitation continues the efforts to establish an integrated, efficient and globally competitive logistics and multi-modal transportation system by implementing the measures as follows:

v. Sustainable transport will be developed based on a regional policy framework that includes low carbon modes of transport, efficiency in the use of energy, integration of transport networks, and better land-use planning.

In relation to transport cooperation in ASEAN, perhaps areas (i) and (iii) are most relevant. Under those two area, there are some measuresthat could be highly relevant: 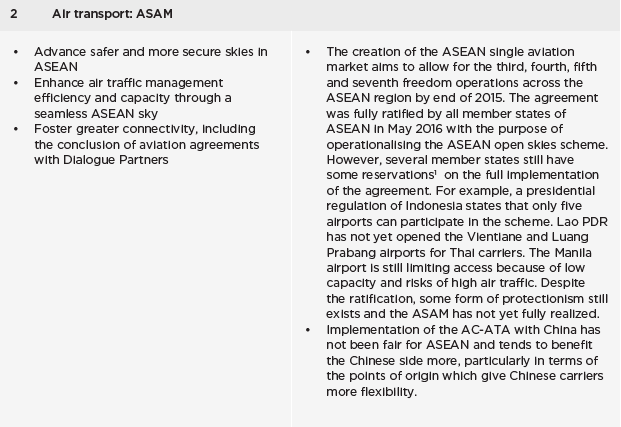 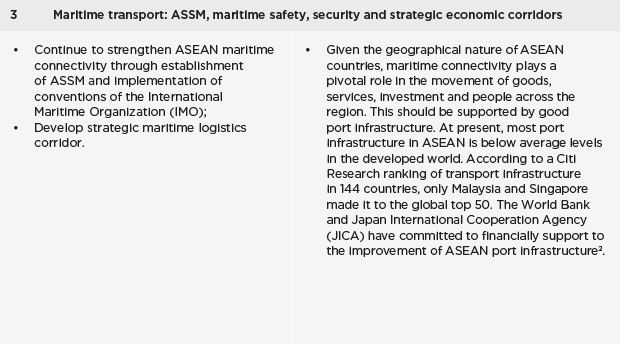