AEC Blueprint 2025 Analysis: Paper 19 | An Analysis of the ASEAN Cooperation in e-Commerce

The rapid advancement in information and communication technology has changed the way people live, including the way people spend their money. In ASEAN, the use of e-commerce has become more and more common. However, the infrastructure needs to be in place in order to support cross-border transactions under an ASEAN single market. While e-commerce offers convenience, it also poses some risks to both the vendors and customers, therefore ASEAN must work towards the provision of intermediary services such as distribution channels, inventory systems, online processing of transactions, and online payment methods which will ensure the security and safety of the ASEAN e-commerce development.

E-commerce has significantly changed the way people do their consumption in the advanced economies. Currently almost everything is available online and can be easily purchased as long as there is an internet connection. Companies such as amazon.com and ebay.com have proven that online selling and buying can be done easily and safely. Safety and security is an important aspect in e-commerce since different from buying in a real market, the customer does not have real feel of the product before they make the purchase and because the customer cannot have the item immediately after the purchase is completed. This unconventional way of buying and selling requires infrastructure that supports the safety and security of the transactions.

Since ASEAN has aimed at creation of a single market across the region, e-commerce will play an important role in supporting cross-border transactions. This however requires intermediary services such as distribution channels, inventory system, online transaction processing, and (online) payment methods. The previous blueprint (2008-2015) has recognized the importance of e-commerce in the AEC, and much effort has been done in this area. However, given the status of development of many ASEAN member states, the agreed measures need to be implemented in a more collective and timely manner to achieve the desired outcomes.

This report aims to provide some analyses on the progress made in the development of e-commerce in ASEAN and what needs to be done further to speed up the implementation process.

In the new AEC Blueprint, e-commerce is under a new pillar: enhanced connectivity and sectoral cooperation. These are for areas of cooperation whose relevance cuts across many different sectors, and even pillars of the ASEAN Community. In the previous blueprint, e-commerce was one area under the pillar of improving the competitiveness of ASEAN as an economic region.

The AEC Blueprint 2015 aimed at laying the policy and legal infrastructure for e-commerce and enabling online trade in goods within the ASEAN region through the implementation of the e-ASEAN Framework Agreement and based on common reference frameworks. The strategic actions identified in the blueprint include:

As explained in the previous paper on ASEAN ICT cooperation, the ASEAN Telecommunications and IT Ministers (TELMIN) in 2011 endorsed the ASEAN ICT Masterplan 2015 (AIM 2015) to better direct the development of ICT in ASEAN for 2011-2015. Under the AIM 2015, there are six strategic thrusts that would guide the activities and initiatives to achieve the expected outcomes, which include:

Implementation of the measures under the AIM 2015 was expected to ensure that all member states can already develop their ICT infrastructure to provide common ground work for the development of e-commerce. 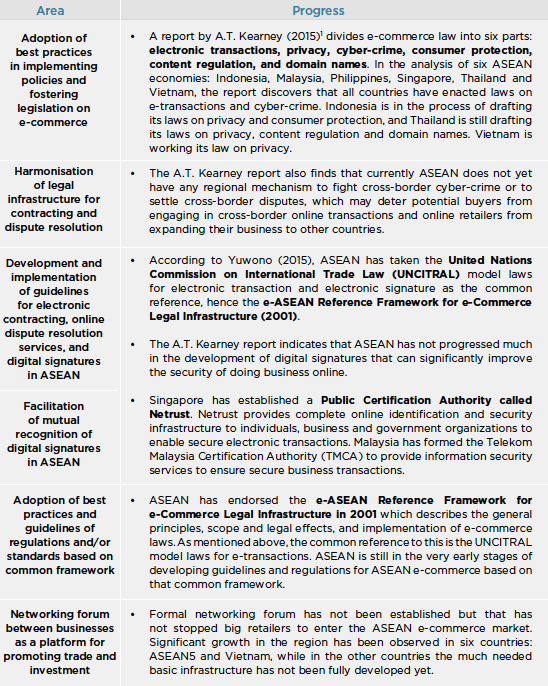 Given that e-commerce development in ASEAN is still in its very early stages (especially in some member states), despite it being part of the AEC Blueprint 2015. One of the most important factors that support e-commerce is the advancement of the ICT sector, particularly the internet quality and coverage in the population. The infographic2 below describes the average download speed in ASEAN for both broadband and mobile. 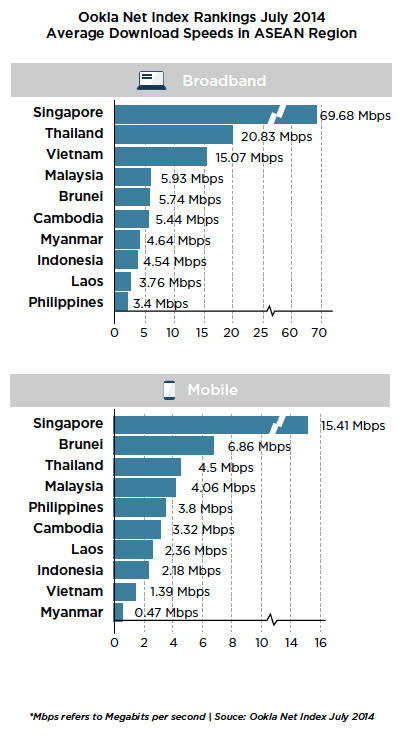 As expected, Singapore tops both lists, way ahead of the rest. The Philippines has the slowest average broadband speed while for mobile, the slowest is Myanmar. Brunei Darussalam, Malaysia and Thailand are in the top five in both lists. The gaps are quite significant between the fastest and the slowest, and this may be quite an important factor in the consumers’ and retailers’ decision making whether or not to be involved in e-commerce, particularly cross-border e-commerce.

The second challenge concerns the inefficient logistics, which is a result of inadequate infrastructure and inconsistent and time-consuming customs procedures. Inadequate infrastructure on the payment and settlement side has also been a problem for ASEAN. The percentage of the adult population with bank accounts is still very low in many ASEAN countries and the development of e-payment system is still in its early stages.

In terms of security, Indonesia, Malaysia, Philippines, and Thailand are among the countries most threatened by cyber-attacks. As mentioned above, ASEAN still does not have a regional mechanism for cross-border dispute resolution and cyber-crime enforcement.

E-commerce is increasingly becoming an important part within the overall strategy of global retailers, in addition to large global retailers focusing entirely in doing business online. In other emerging economies, most notably China, e-commerce increasingly plays an important role in enlarging retail business, as supported by the necessary infrastructure, and the growing consumer base who rely on their smartphones, in addition to computers. ASEAN also continuously promotes the development of e-commerce as an important means to enlarge existing business, to reach new customers, and to support the growth of MSMEs. The new AEC Blueprint 2025 aims to enhance the ASEAN cooperation on e-commerce to support the realization of economic integration as already stated in 2000 by the ASEAN Summit during the launch of the e-ASEAN Framework Agreement, particularly on Article 5 on the Facilitation of the Growth of Electronic Commerce. Several strategic measures have been identified in the AEC Blueprint 2025 to further encourage the development of ASEAN e-commerce:

Given that e-commerce is highly reliant on development and distribution of ICT services, development in this particular area is also guided by the Master Plan on ASEAN Connectivity (MPAC) 2025. The MPAC provides a grand guidance on improving and promoting ASEAN Connectivity in five key areas: (i) sustainable infrastructure, (ii) digital innovation, (iii) seamless logistics, (iv) regulatory excellence and (v) people mobility. In relation to ICT cooperation in ASEAN, perhaps area (ii) is most relevant. The initiatives under digital innovation include:

The e-commerce section of the AEC Blueprint 2025 covers measures that are all under the broad topic of e-commerce law and legislation: consumer rights and protection, dispute resolution mechanism, e-identification and authorization schemes, and personal data protection (privacy). While these are extremely important, we would like to reiterate the importance of other measures that are crucial in further promoting cross-border e-commerce across the ASEAN region. Those measures have been proposed by the A.T. Kearney report which itself was a collaboration with CARI.

E-commerce has increasingly become an important element of retail business and this could be a way for ASEAN MSMEs to expand their businesses because of the low cost needed and the greater market access that e-commerce can offer to them. Development of ASEAN MSMEs then must be intensified through capacity building and more access to the financial system.

Improvement of security of online transactions is the next proposed measure but this is covered already by the new blueprint. Development of e-payment system that is secured and reliable is important. The ASEAN finance authorities need to work together to further promote non-cash transactions and harmonise e-payment regulations to support cross-border transactions.

Cross-border online transactions cannot work well without improved logistics and better trade facilitation. Improvement of ASEAN connectivity will also play a crucial role in ensuring that movement of goods across the region can be done more efficiently.

1 CARI and A.T. Kearney collaborated on a paper, Lifting the Barriers to E-Commerce in ASEAN, to address the issues related to e-commerce development in the Southeast Asian region.
2 Source: inquirer.net