AEC Blueprint 2025 Analysis: Paper 22 | An Analysis of the ASEAN Cooperation in Tourism

Tourism has been an important sector under the AEC due to its contribution to the GDP and provision of employment at many levels. However, the tourism sector is also sensitive to economic, political and environmental changes. Therefore, closer cooperation among member states is of the utmost importance. While international arrivals into the ASEAN region has increased over time, ASEAN still lags behind in terms of infrastructure that is needed to support the sector’s development. This needs to be addressed quickly as ASEAN is competing with the other parts of world in attracting international visitors. The large gaps among member states in global tourism ranks is another issue that requires attention. If these gaps can be reduced, ASEAN as a whole will reap the benefits.

Tourism has been one of the most “celebrated” sectors due to its popularity and importance in the AEC. The ASEAN cooperation in travel and tourism dates back to the 1970s with the formation of the ASEAN Sub-Committee on Tourism, who paved the way for a more intensified cooperation in tourism. This was followed by the establishment of the ASEAN Tourism Ministers’ Meeting (M-ATM) in 1998. The cooperation aims at strengthening the ASEAN tourism industry so that it can become of the pillars of the ASEAN economy that contributes to the GDP and provides employment for many ASEAN nationals. While a lot has been achieved, many more can be done to improve the performance of the industry, particularly since the tourism sector is highly sensitive to political and economic changes, and to environmental damages caused by natural catastrophes.

In the previous AEC Blueprint (2009-2015), the tourism sector was not specified on its own but rather was fused under other related sectors such as infrastructure and services trade. The new blueprint for 2016-2025 provides greater clarity on the strategies and measures going forward. This report attempts to review the progress made in this sector, analyze the new strategic plan under the new blueprint, and make some recommendations that could improve the implementation side in the next period of the AEC.

The AEC 2015 Blueprint does not outline specific strategies and targets for the tourism sector, but instead it is mentioned under other sectors, with those sectors committing to support the development of the ASEAN tourism sector. Those sectors include:

A2. Free flow of services, where ASEAN is committed to remove substantially all restrictions on trade in tourism services by 2010

A6. Priority Integration Sectors, where ASEAN tourism has been identified as one of them, with a roadmap that combines specific initiatives of the sector and the broad initiatives that cut across all sectors (such as trade facilitation measures)

B4. Infrastructure development, in which ASEAN is committed to develop an efficient, secure, and integrated transport network that is vital for realizing the full potential of the ASEAN Free Trade Area as well as enhancing the attractiveness of the region as a single production, tourism, and investment destination.

C2. Initiative of ASEAN Integration (IAI), which gives the direction and sharpens the focus of collective efforts to narrow the development gap, not only within ASEAN but also between ASEAN and other parts of the world, covering many areas including tourism.

The ASEAN cooperation in the travel and tourism (T&T) sector has shown many significant progress. The table below provides some highlights of what ASEAN has achieved in promoting ASEAN as a single tourist destination. 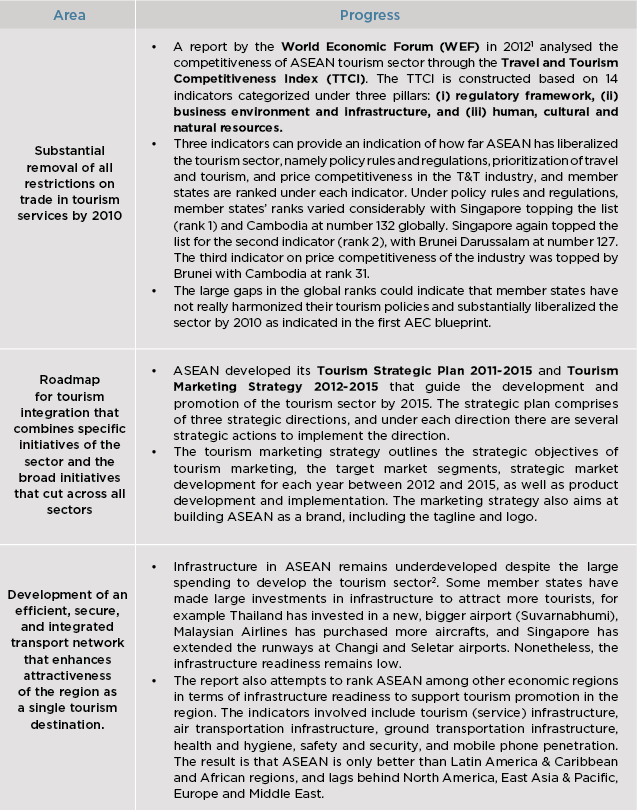 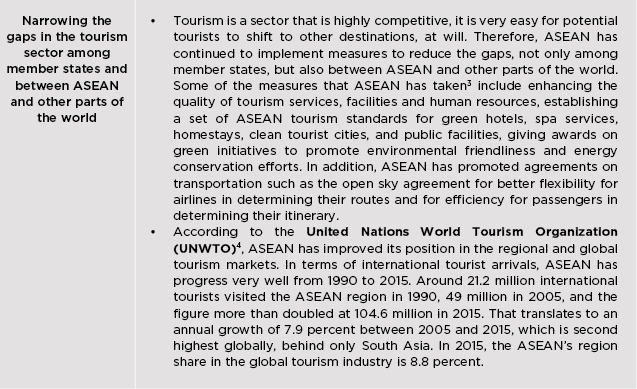 While the ASEAN tourism authorities have made much progress in developing and integrating the sector, there are still issues that need to be addressed. One important fact that needs attention is the large gap among the member states in terms of policy and regulation, infrastructure readiness, and as a result, international tourist arrivals and monetary receipts. The table below summarizes the progress of ASEAN member states in the tourism sector for the year 2015. 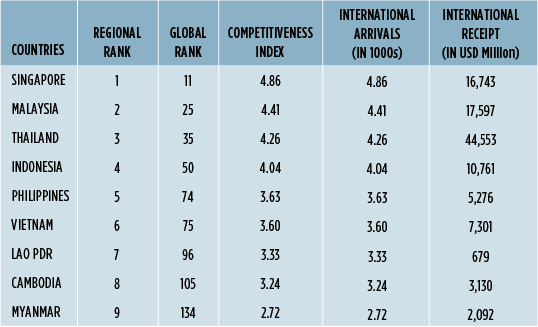 The distance in the global ranks between Singapore and the bottom two countries is quite significant, showing that the top ASEAN countries have progressed much better in developing their infrastructure and enabling environment for tourism, compared to the younger members of ASEAN. Indonesia as the largest economy in the region only managed to attract less than half of the tourists who visited Malaysia and Thailand, meaning that the country still has a lot to work on in promoting their tourism industry.

As mentioned above, in general ASEAN member states have not spent sufficiently for developing their infrastructure. The current tourism infrastructure in the region is way behind that in other parts of the world, particularly those in the more developed regions. A study by the WEF5 on the T&T sector in the Asia-Pacific countries looked at the relationship between T&T infrastructure and the sector’s contribution to the GDP. It found a positive correlation between the two with an R2 of 0.427, which means that around 43 percent change in the contribution to GDP (dependent variable) is explained by the T&T infrastructure composite score (independent variable). In other words, the existence of proper infrastructure could significantly contribute to tourism sector’s higher share in the GDP.

While air transport may be the most significant means of transport in bringing in international visitors, development of the other means of transportation could also bring about positive impacts to ASEAN tourism6. This may be under the purview of the infrastructure and connectivity sectors but currently, the lack of easy and seamless multi-modal transport in many ASEAN countries has made it difficult to design a multi-country visitors package which could be beneficial for ASEAN tourism as a whole.

The objective of creating ASEAN as a single tourism destination is not yet supported by a single visa that would allow tourists to visit all ten ASEAN countries at once. In comparison, the European Schengen Visa allows the holder to visit all countries that have signed the Schengen Agreement, allowing them to travel to several countries with only one visa application in their home country.

The hotel industry, as an important part of the T&T sector, is highly vulnerable to any form economic and political shocks. Economic shocks, both domestic and global, could pose some risk that result in low occupancy rates. Domestic political shocks are quite frequent in emerging market economies, including ASEAN, which could seriously adversely affect the number of international visitors, resulting in a hit to the hotel industry.

The AEC Blueprint 2025 outlines the framework for ASEAN tourism that focuses on creating the ASEAN region as a quality tourism destination that offers a unique and diverse ASEAN experience. The blueprint also strengthens the commitment to develop the tourism sector in a responsible, sustainable and inclusive manner with strategies and action programmes that address the main challenges in the sustainable development and integration of the sector, ensure better distribution of benefits, improve safety and security, and promotes cross-border movements of tourists across the region.

The blueprint outlines the two strategic measures and the key measures under them, as follows:

Enhance competitiveness of ASEAN as a single tourism destination through the following key measures:

Achieve a more sustainable and inclusive pattern of ASEAN tourism through the following key measures:

The new blueprint has rightly listed the necessary measures to further develop and integrate the ASEAN tourism sector, given the huge importance that the sector plays in introducing ASEAN to the global community and contributing to the ASEAN GDP. Despite the success, more work needs to be done, and the table below provides some analyses on the progress on each measure in the blueprint. 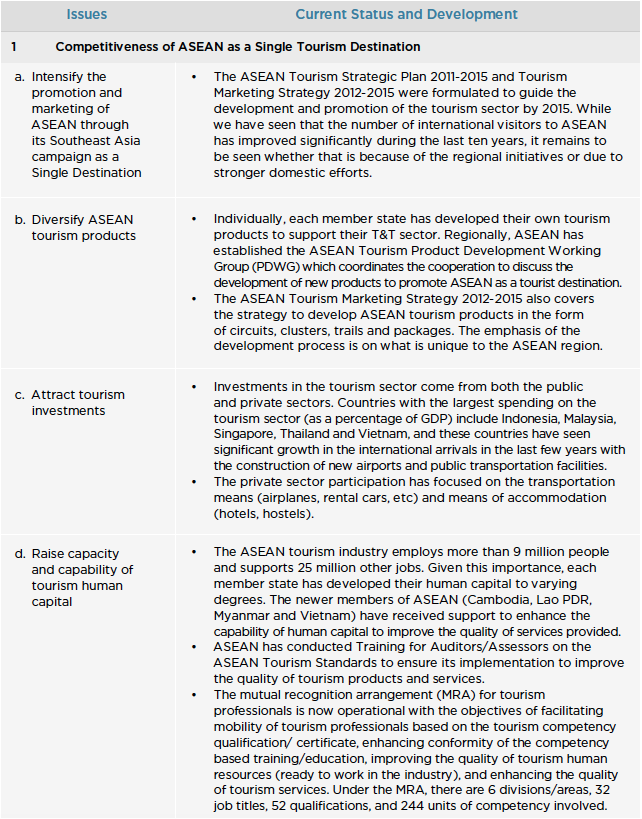 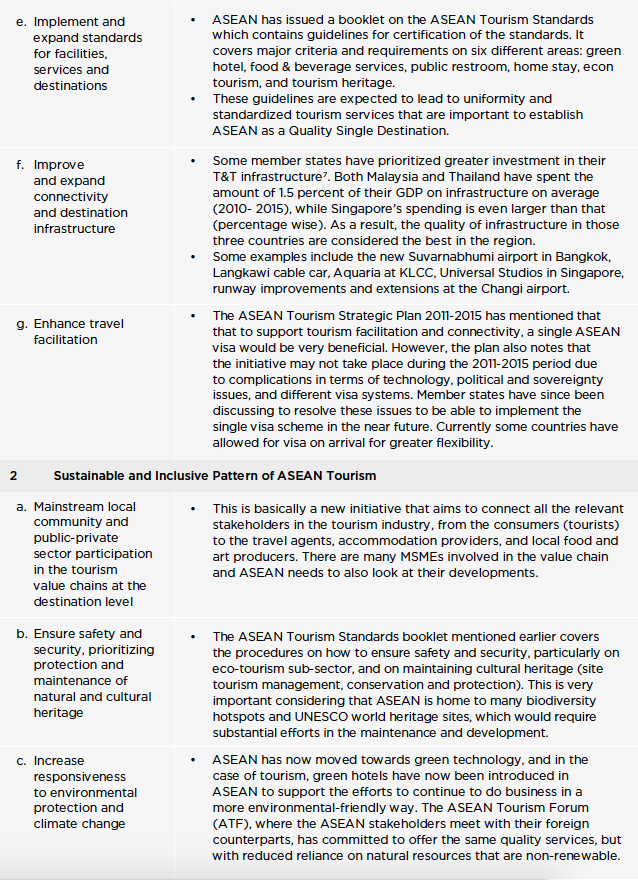 In commemorating the 50th anniversary of ASEAN in 2017, the ten ASEAN national tourism organisations have jointly developed a regional tourism campaign: “Visit ASEAN@50: Golden Celebration8.” This idea was warmly welcomed by the ASEAN Tourism Ministers during the ASEAN Tourism Forum 2016 in Manila, the Philippines. The campaign aims at further promoting the ASEAN region as a single and united tourism destination, as well as celebrating the important milestone set by the 50th anniversary of ASEAN. While many activities have been prepared for this, including more intensive promotion and marketing (through social media) and special tour packages, it would be more useful if ASEAN is able to finalize the single or common visa that would allow visits to multiple countries in the region. There is a multiplier effect to this compared to requesting potential tourists to apply for visa for each country they wish to visit. According to the UNWTO and WEF, there could be up to 6-10 million additional visitors to ASEAN if the common visa can be operational.

The role of the ASEAN Travel Association (ASEANTA) and the national tourism organisations (NTOs) must be enlarged as they have the necessary resources and knowledge to implement the agreed measures and strategies. The ASEAN T&T industry will benefit from more intensive dialogues and cooperation among the relevant stakeholders (public and private partnership). In relation to that, ASEAN needs to strengthen its efforts in the areas of promotion, marketing and product development to realize the ASEAN region as a single tourism destination that offers a unique experience.

The ASEAN tourism sector could cooperate with other relevant sectors, for example infrastructure and connectivity to develop a better transportation facilities (other than air transport) that can facilitate multi-country visits by non-ASEAN tourists. If the T&T sector can provide the push factors (e.g. figures on the number of international visitors to ASEAN and their intra-ASEAN travels), there will be a strong justification to expedite the development of the much needed transportation facilities across ASEAN. Member states will no longer “compete” with each other to attract visitors, but could create synergy in which a visitor to one country will most likely visit other countries as well.

The younger members of ASEAN can benefit from more capacity building programs and technical assistance from the larger ASEAN economies in narrowing the tourism sector gaps. If the tourism industry in the CLMV countries can be improved, and if this can be combined with the single or common visa for ASEAN, the whole region will reap the benefits as larger international arrivals can be expected into the ASEAN region.

The ASEAN tourism value chain must be further defined and strengthened so that all the parties involved can understand their roles, contribute to the chain, and benefit from their involvement. Currently, there is no clear guidance on this matter and the tourism authorities need to lay out what the strategy implies and how the relevant parties can create a synergy for the industry. This should also include strengthening the MSMEs that are part of the value chain.
ASEAN should promote cross-border movements of tourism professionals as governed by the MRA for tourism professionals as this will encourage standardization of competencies, improve quality of tourism services, and facilitate mobility of tourism professionals across the region.