AEC Blueprint 2025 Analysis: Paper 25 | An Analysis of the ASEAN Cooperation in Science and Technology

Science & technology (S&T) is an essential sector which supports the ASEAN Community, particularly the ASEAN Economic Community (AEC). Under the second period of AEC development, S&T has been shifted from the Socio-Cultural pillar to AEC, emphasising its importance to the economic and business sectors in ASEAN. While the S&T sector covers many different areas of research and cooperation, the implementation side is suffering from limited commitment and resource mobilisation , which has resulted in a relatively low level of expenditure on research and development (R&D) by ASEAN member states compared to their East Asian counterparts. In addition, in terms of R&D, member states continue to work in silos as opposed to collaborating. Among the targets of the new AEC Blueprint 2025 include improvements in the areas of innovation, entrepreneurship and mobility of S&T professionals. Greater commitments by member states, and stronger partnerships with the relevant stakeholders (international organisations, universities, research institutes, and private sector) will be crucial if these targets are to be successfully implemented. Singapore, as the most progressive member state in this area, can set good examples for others to follow in terms of commitments by all stakeholders and application of relevant innovations to solve their daily challenges.

The importance of S&T in supporting the ASEAN economic cooperation was already acknowledged back in 1970 when the ad-hoc Committee on Science and Technology met in April 1970 in Jakarta, Indonesia to discuss enhancement of S&T cooperation. In 1997 the 2nd ASEAN Informal Summit in Kuala Lumpur, Malaysia, adopted the ASEAN Vision 2020 which endorsed the vision of “a technologically competitive ASEAN competent in strategic and enabling technologies, with an adequate pool of technologically qualified and trained manpower, and strong networks of scientific and technological institutions and centers of excellence.” With a view that rapidly advancing countries have strong support from their S&T sector, ASEAN has continued to strengthen their cooperation in this area and ASEAN Community blueprints for 2008-2015 and 2016-2025 have placed a strong emphasis on the measures that need to be implemented to promote S&T cooperation and bridge the gap across the region.

In the previous ASEAN Community Blueprint 2008-2015, the ASEAN S&T cooperation was under the pillar of ASEAN Socio-Cultural Community (ASCC) but in the new blueprint that will guide the establishment of ASEAN Community in 2016-2025, its is included within the AEC pillar, making it more relevant in supporting economic cooperation among member states. This report will look at and evaluate the progress made to date under the ASCC Blueprint 2015, analyse the measures under the new AEC Blueprint 2025, and make some recommendations on the implementation side.

Given the long history of ASEAN S&T sector, it has covered many areas. The structure of ASEAN S&T cooperation is given in figure 2. Each area is handled by a sub-committee who regularly meets to discuss the progress and plan ahead to improve the implementation. The figure also shows the dialogue partners that have been formally supporting ASEAN in developing the sector. 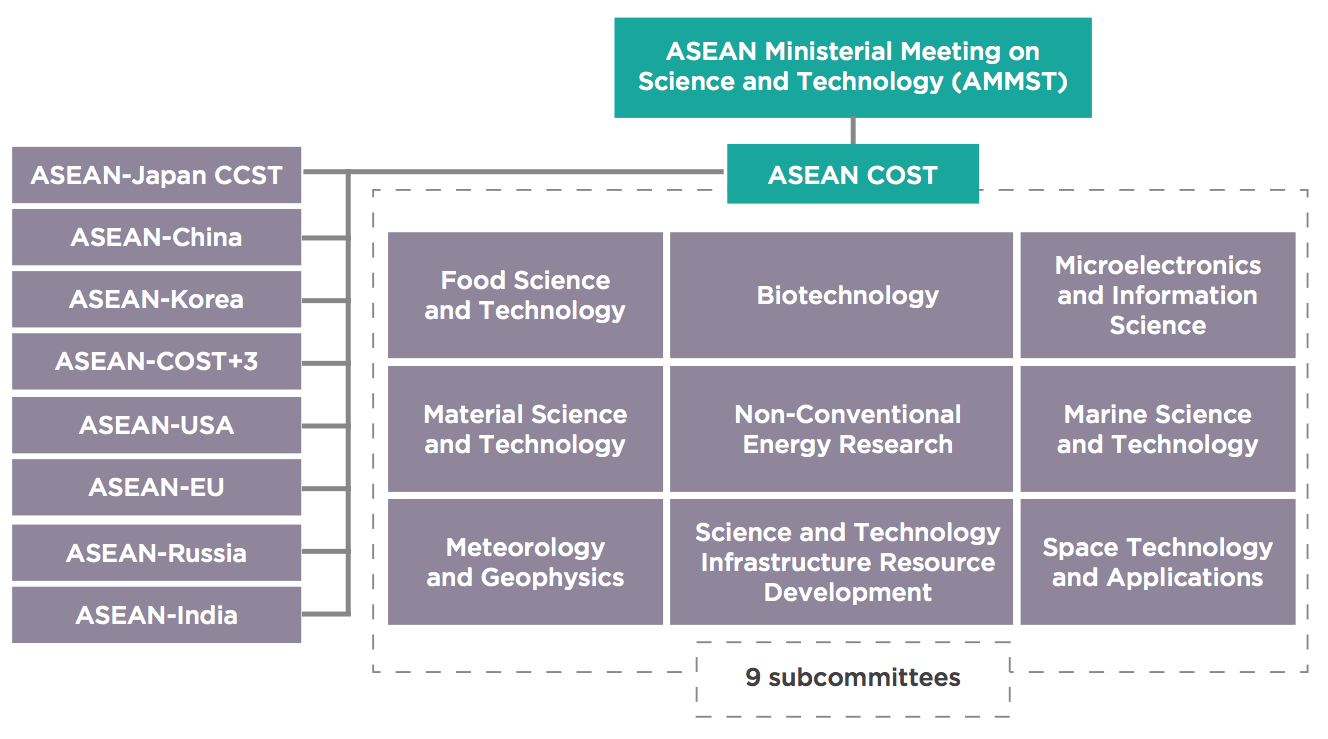 S&T cooperation in ASEAN under the ASCC was specifically under the first pillar of enhancing human development in the regionThe strategic objective was to develop policies and mechanisms to support active cooperation in research, science and technology development, technology transfers and commercialisation and establishment of strong networks of scientific and technological institutions with the active participation of private sector and other relevant organisations.

The strategic actions that were envisaged to achieve the above objective include:

Specifically, the ASEAN Plan of Action on S&T (APAST) 2007-2011 outlines the main strategic thrusts that aim to enhance ASEAN’s S&T capability. These include:

Measures under the two documents (ASCC Blueprint 2015 and APAST 2007-2011) seem more or less consistent in terms of what ASEAN member states plan to do to develop this sector.

In December 2010, ASEAN introduced the Krabi Initiative with the vision of increasing competitiveness, sustainability and inclusivity in ASEAN through Science, Technology and Innovation (STI)1. The ASEAN Krabi Initiative has been used to enhance the APAST 2011-2015 and used as a reference in the formulation of the next APAST for post-2015. The initiative focuses on eight thematic tracks: 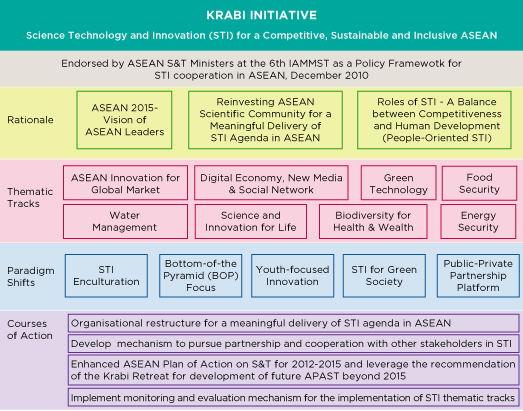 B. Significant Achievements to Date

The progress made in S&T under the ASCC Blueprint 2015 is described below.

Lack of resource mobilisation and funds for S&T

Figure 3: Expenditure on R&D as percentage of GDP of East Asian economies (as of 2015) 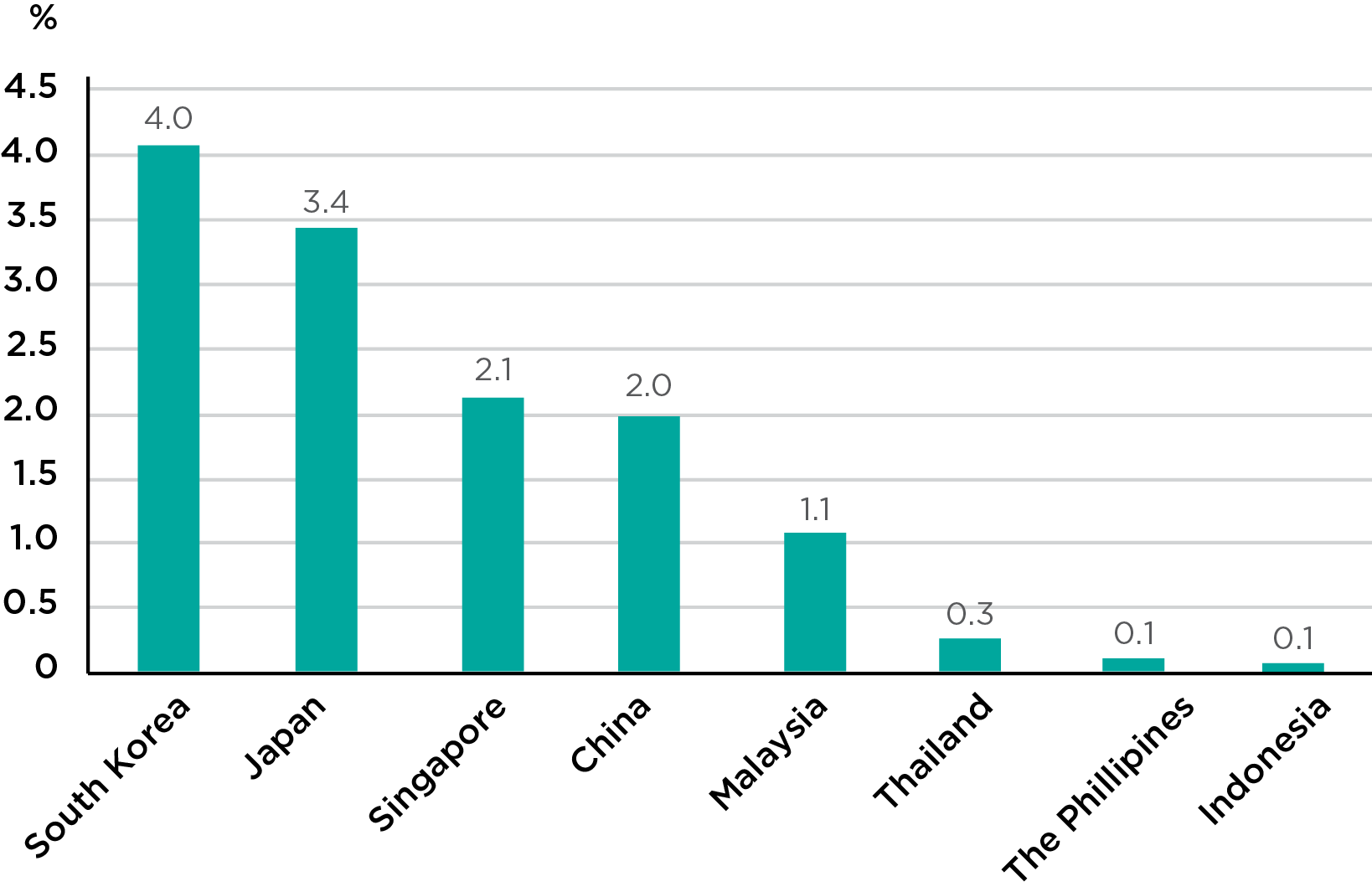 For 2016-2025, the ASEAN S&T cooperation has been moved to the AEC pillar. This is likely based on the notion8 that a single market would spur more cross-border movement of R&D professionals and therefore promote enhancement of S&T across the region, and that successful economic cooperation will greatly depend on how well member states can advance their S&T to support economic development and growth.

That notion above is further reiterated in the new AEC blueprint commitment to utilise science, technology and innovation (STI) to support and sustain economic growth and competitiveness. The ASEAN Plan of Action on Science, Technology and Innovation (APASTI) 2016-2025 and its implementation plan will be the important reference in achieving that objective. The strategic measures involved include:

Measures under the new AEC blueprint are listed in the table below with some analyses on the progress on each measure.

In November 2014, Prime Minister Lee Hsien Loong launched Singapore’s Smart Nation initiative with the aim of creating better living conditions for all Singaporeans. The development and adoption of technology and networks will support his by providing solutions to everyday problems in the lives of the people. . Areas where digital technology is expected to improve efficiencies include transport, home and environment, business productivity, health and enabled ageing, and public sector services. The Smart Nation initiative is a dynamic collaboration between the people, who are invited to raise ideas to solve everyday challenges, and work with the government, who are responsible for putting in place the infrastructure, policies and enabling environment to encourage this innovation.
It is important to note that the Singapore government, through the Smart Nation and Digital Government Office (SMDGO) under the Prime Minister’s Office, plays a crucial role in developing an environment that enables stakeholders to conveniently express their innovative ideas and begin work to fully operationalise them.

One important element that has improved the lives of Singaporeans is the use of ICT in public administration and delivery of government services. This has led to an improvement in convenience, productivity and efficiency when servicing people. The current master plan, which is the eGov2015, promotes collaboration between government, private sector and people to discover new solutions to daily challenges. This builds on the success of the previous master plan: eGov2010, which resulted in 87 percent of the people satisfied with the quality of government’s e-services, and 93 percent of them willing to recommend others to utilise the e-government services.

Governance of the e-government initiative is under the Ministry of Finance (MoF), who provides funding for e-government programmes and projects, Infocomm Development Authority (IDA) of Singapore, which serves as the Government Chief Information Officer (CIO), as well as CIOs of government agencies. This partnership is aimed at developing and implementing e-government programmes under three strategic thrusts: (i) co-creating for greater value, (ii) connecting for active participation, and (iii) catalysing whole-of-government transformation, as described by the figure below. 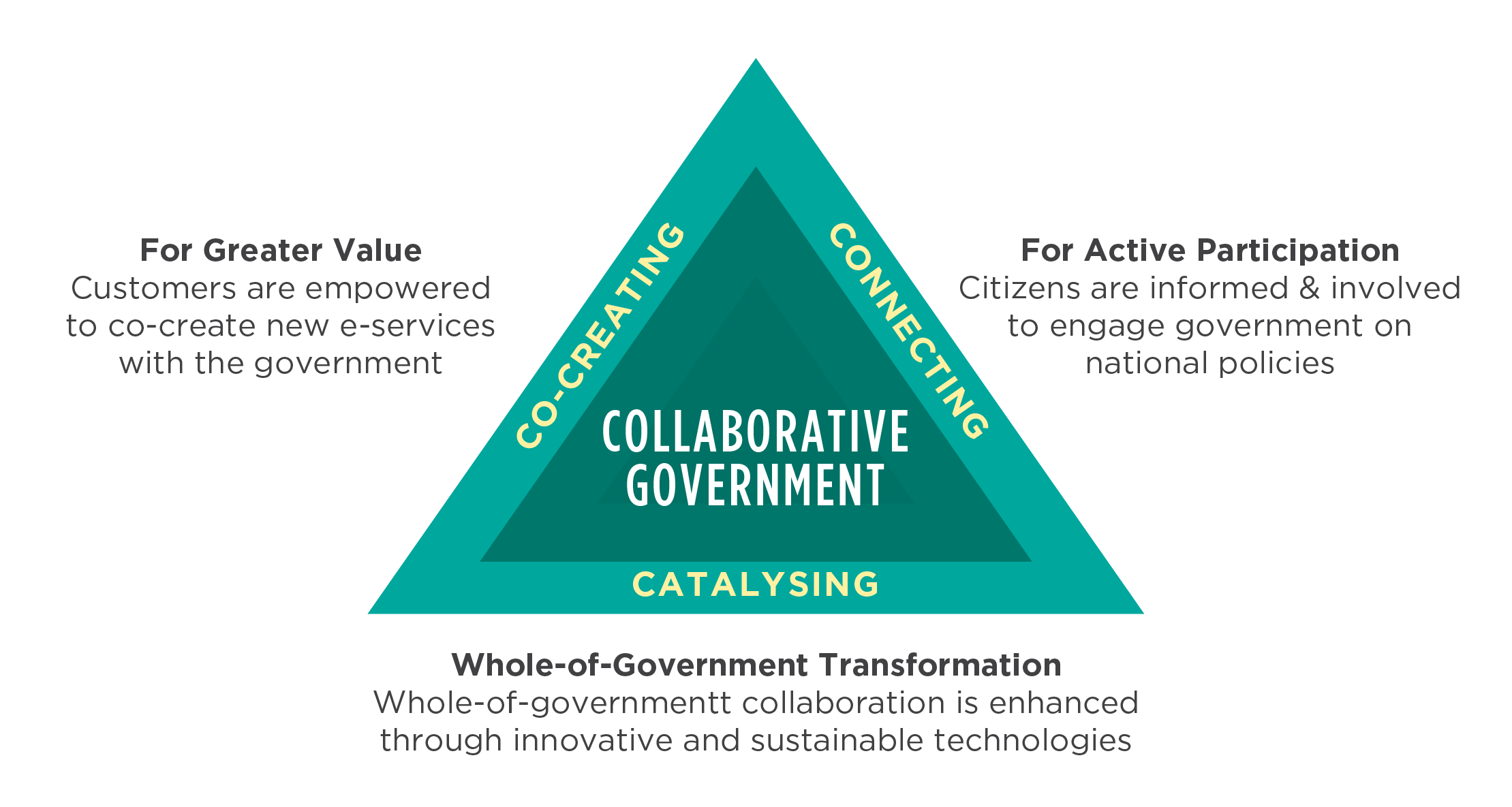 Examples of important outcomes of the e-government program include:

In the younger member states of ASEAN, funding may be an issue as the governments’ priorities are more on other sectors of the economy, particularly infrastructure. As a result, fully relying on government budget to develop the S&T sector may delay the progress that could otherwise be achieved. This is why ASEAN has established the ASEAN Science Fund and the ASEAN Innovation Fund. Utilisation of these funds must ensure that the targets set out in the plan of action can be systematically attained to realise the contribution of STI to the AEC.

Member states should strengthen the linkage between R&D and its applicability to business and industry. This could be improved via joint research that involves personnel from all the stakeholder groups , including businesses who have a better understanding of markets and consumer preferences. If such synergy can be established, commercialisation of R&D outputs will no longer be an issue, and R&D will be an important contributor to the success of the private sector. ASEAN can learn from Singapore’s success in managing the sector and creating policies that support the progress.

Governments should have stronger dialogue and cooperation with the private sector who is the most important user of R&D. This could bridge the gaps and encourage greater progress through more efficient allocation of resources and implementation of the outlined AEC action plans.