AEC Blueprint 2025 Analysis: Paper 26 | An Analysis of the ASEAN Cooperation in Strengthening the Role of Micro, Small and Medium Enterprises (MSMEs)

Issues faced by micro, small and medium enterprises (MSMEs) are an on-going source of discussion within the AEC. Everyone recognises the importance and potential of MSMEs but very little has been done to strengthen their role in the economy. The most common barriers to MSME growth are: access to finance and technology, low quality of human resources, and relatively unfriendly infrastructure and regulatory environment. Unfortunately, coordination among ASEAN sectoral bodies in charge of the relevant areas is still quite low and more communication among could address some of the issues faced by MSMEs. In addition, the private sector needs to be involved given their abundant resources, both financial and in the area of human capital, which could be beneficial for the development of ASEAN MSMEs.

ASEAN Cooperation in Strengthening the Role of MSMEs

ASEAN MSMEs have been an important backbone of the ASEAN economies. Close to 96 percent of the total businesses in the ASEAN region is made up of MSMEs, emphasising the importance of this business segment in contributing to the ASEAN GDP and in providing employment to a large percent of the domestic workforce in the region (77-97 percent in Indonesia, Thailand and Vietnam, and 58-62 percent in the rest of ASEAN)1. In addition, MSMEs have also been instrumental in providing employment to women and opportunities for women entrepreneurs to access the potential markets.

Because of their increasing importance in the economy, ASEAN has committed to developing and supporting MSMEs to enhance their business activities and role in the realisation of the AEC. The ASEAN SME Working Group (SMEWG) was established in 1995 to coordinate all the initiatives and activities to promote SME development in the region. The Strategic Action Plan for SME Development (SAP-SMED) for 2010-2015 was formulated to guide the implementation process. The SAP-SMED itself was built upon the ASEAN Policy Blueprint on SME Development (APBSD) 2004-2014.

Under the AEC Blueprint 2015, SME development is aimed at:

The following actions were to be implemented in order to achieve the aforementioned goals:

B. Significant Achievements to Date

Given the importance of ASEAN SMEs, member states have never stopped making efforts to promote the sector by implementing the measures agreed upon. However, developing SMEs is challenging and more support is needed from the relevant stakeholders. The progress made under the AEC Blueprint 2015 is described below. 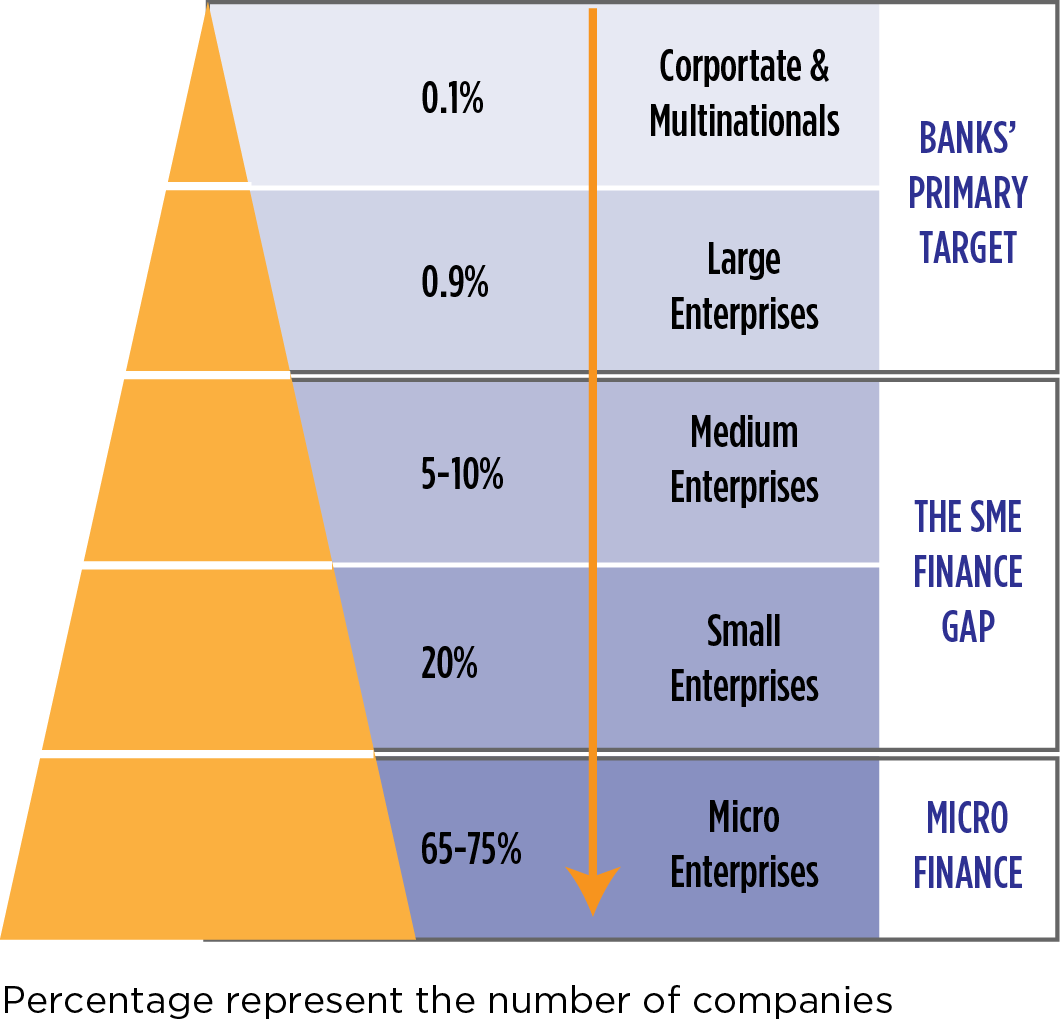 Lack of technical know how

The gap between SMEs in ASEAN countries 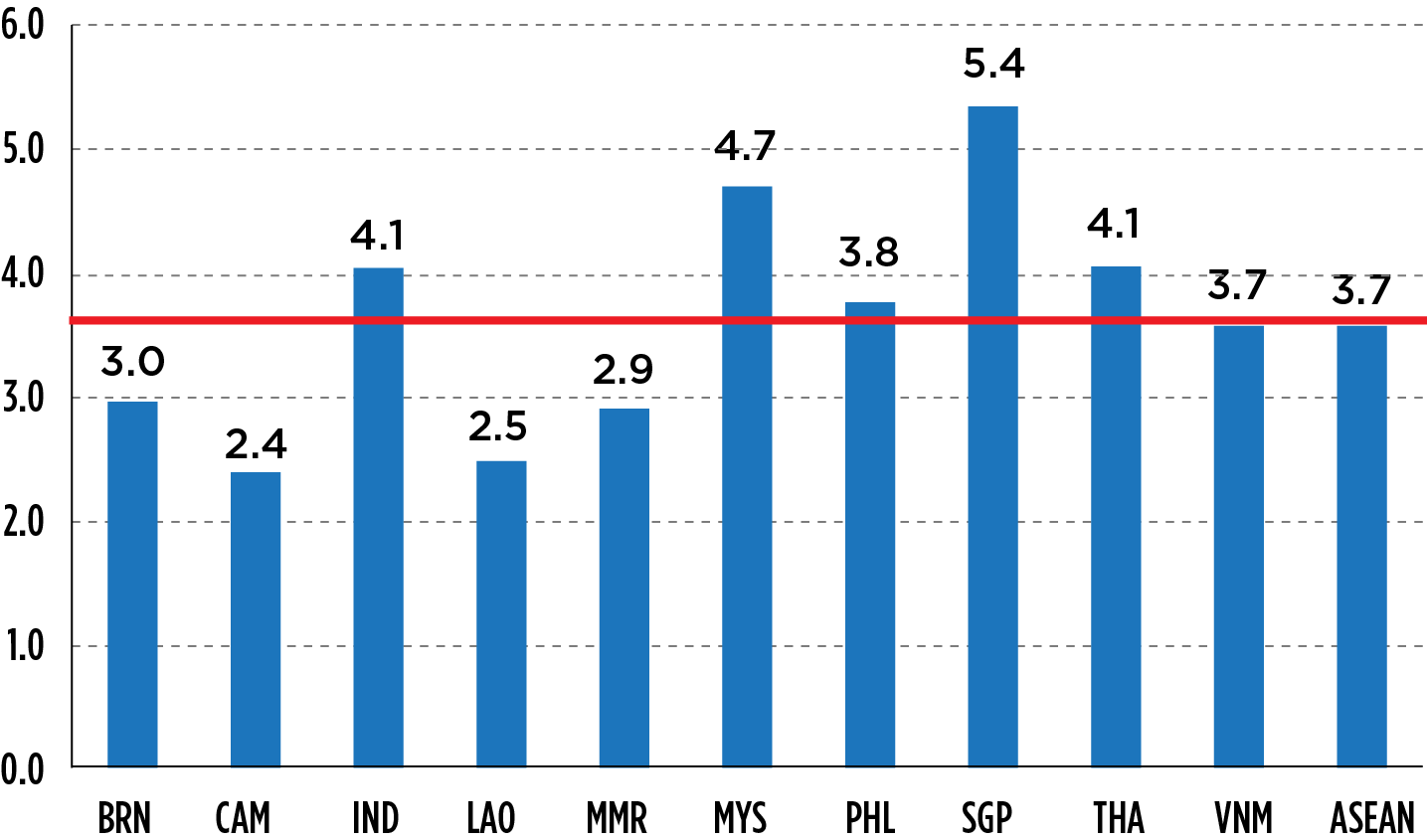 As described by the new blueprint, the chief challenges for ASEAN MSMEs include globalisation, advances in ICT, trade liberalisation, and evolution of production processes. ASEAN efforts thus far have focused on networking, information flows and capacity building for officials on areas such as access to finance, technology, innovation, markets, human resource development, and regulatory framework.

The next period of AEC establishment focuses on a more structured and targeted MSME programme to enhance competitiveness, resilience, productivity, innovation, and capability to benefit from a more integrated ASEAN. The identified measures to achieve those objectives include to:

The measures under the new AEC Blueprint have been structured based on the experience from implementing the action plans of the previous period. The table below explains the current progress made under each measure of the new blueprint on MSME development.

Wignaraja and Dumaua-Cabauatan14 suggest that ASEAN MSMEs are not prepared to reap the benefits offered by the AEC and Regional Comprehensive Economic Partnership, and compete with larger business enterprises. Therefore, they propose that ASEAN needs to revisit the following to ensure that MSMEs benefit from the AEC:

Member states need to spend more on technology development and technology transfer, which covers not only the common physical and digital infrastructure. This will not only better the production process but also marketing and business development through e-commerce. Moreover, improved connectivity across the ASEAN region through better transportation infrastructure could provide better link between suppliers and customers and support freer flow of goods, services and movement of skilled workers.

Improving the access to the financial system may significantly boost MSMEs capability to be more productive and competitive. In this case, the authorities in charge of MSME development need to strengthen the collaboration with the finance side and develop a scheme to facilitate more funding by ASEAN commercial banks to MSMEs and ensure that it is a good business to do so. This could be improved by better credit rating system, alternative collateral schemes, and more intensive financial education.

The new AEC blueprint has covered the most important measures to be taken the bring ASEAN MSME’s performance to a higher level. Member states need to strengthen their commitment in implementing those agreed measures and improve cross-sectoral coordination and collaboration as many of those measures are under the purview of different economic sectoral bodies under the AEC pillar. There could be a forum where the sectoral bodies in charge of MSME development, financial cooperation, science and technology cooperation, and agriculture development, as well as other relevant stakeholders, can sit together to discuss more meaningful development of ASEAN MSMEs as an significant component of the AEC.

Closer collaboration with the private sector, particularly on the access to finance and technology could improve the implementation side by tapping on the resources that the industry side has. A formal forum for a partnership could be established where the authorities and industry representatives could formally discuss the ways to empower the ASEAN MSMEs better.