AEC Blueprint 2025 Analysis: Paper 3 | Liberalisation of the Trade in Services

The AFAS helped to pave the way for commitments towards liberalising the trade in services. However, not all of these commitments have translated to concrete policy change, and with the introduction of ATISA, will the AEC Blueprint 2025 be able to right ASEAN’s path?

What were the targets in the AEC 2015 Blueprint?
The goal of free flow of goods was a key element in achieving the AEC’s first pillar within the 2015 blueprint, which detailed the creation of a single market and production base. As the World Trade Organisation’s (WTO) General Agreement on Trade in Services (GATS) covers a significant portion of liberalising the trade in services, ASEAN’s focus has primarily been centred on addressing issues not covered by the treaty; this is known as the GATS-Plus principle. (Secretariat, 2015) Since the formation of ASEAN in 1967, several agreements and plans have been put in motion:

1. General Agreement on Trade in Services (GATS)
GATS defined the four main modes of supply for the delivery of services so as to simplify discussions regarding the subject. It should be noted that services liberalisation will be discussed in terms of the GATS classification of service delivery modes:

without halting the progress of services liberalisation for other member states.

3. The AEC Blueprint 2015
Adopted in 2007, the blueprint defined the commitments and priority sectors which would be the focus of negotiations.

As illustrated by the graph above, the average annual growth of total services trade of ASEAN member states over the period 2007-2013 has been strong. In particular, the growth in intellectual property imports and exports in maintenance and repair services is apparent. Growth in the trade of services has been encouraged by the increasing scope and coverage of AFAS’ package commitments, as illustrated in the figures below: 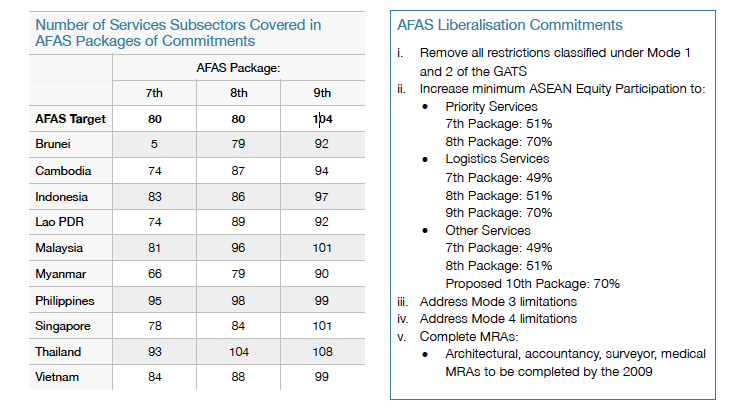 According to GATS classification, the AFAS has been primarily successful in addressing service liberalisation in Modes 1 and 2, as illustrated by the AFAS’ complete removal commitment. Mode 4 has seen moderate progress with the finalisation of certain MRAs, whilst Mode 3 has improved under increasing minimum ASEAN equity participation requirements. Under the AFAS and AEC Blueprint 2015, ASEAN has concluded:

ASEAN commitments have increased with time in terms of both number and depth, with policy change occurring
across the development spectrum. (Dee 2015) 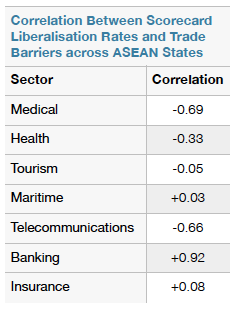 A comparison between services trade commitments with actual domestic policies in each of the ASEAN member states done by the ERIA found that there was a significant lag between AFAS commitments and the implementation of domestic policy change. (Dee, 2015)

Mode 4 liberalisation is confined to the movement of professionals only.

What new measures are included in the AEC 2025 Blueprint? 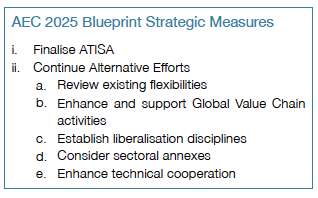 The AEC 2025 Blueprint seeks to replace an aging AFAS with the ASEAN Trade in Services Agreement. (ATISA)

Several new supplementary initiatives have been brought to the table, in particular, the call for common definitions with regards to sensitive lists and sectors.

A key component of focus will be the ongoing review of the “ASEAN minus x” commitment system, with the majority of ASEAN states hoping to lower the level of flexibility offered so as to advance a unified free trade agenda. 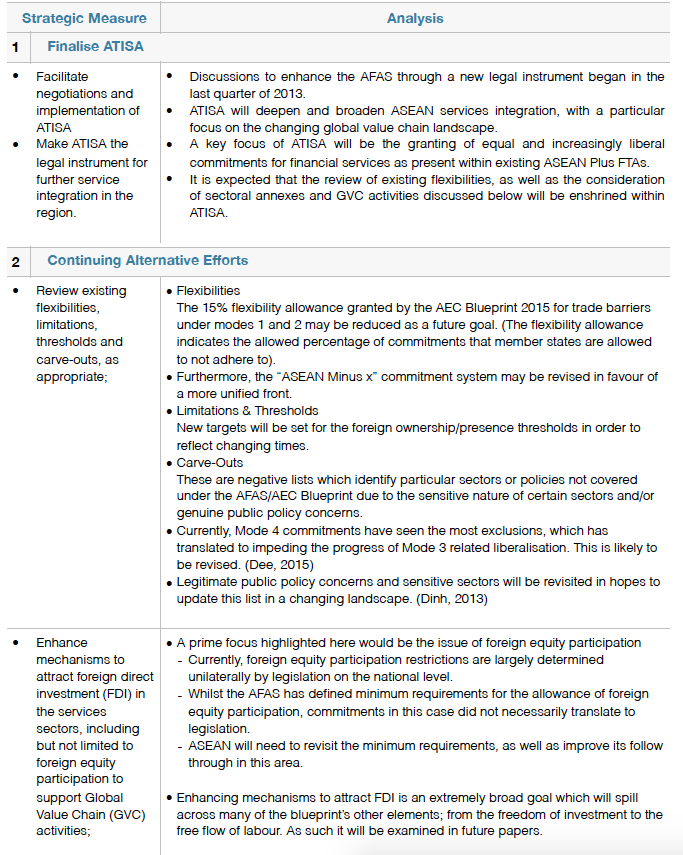 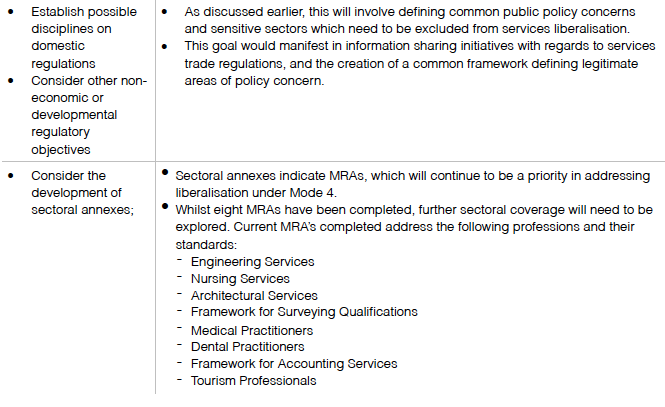 What does the AEC 2025 Blueprint mean in terms of Trade in Services?
It is unclear at this point what the ATISA will bring to the table in concrete terms, however, the significant issue of domestic legislation change lagging behind commitments is unlikely to be directly addressed by the new legal instrument.

The most significant change indicated by the AEC Blueprint 2025 would be the fact that it hints that several key mechanisms under the AFAS will be reviewed, such as but not limited to: