Whilst the need to attract Foreign Direct Investment (FDI) has long been a successful driver of investment liberalisation, recent rollbacks and protectionist policies have threatened progress. The AEC Blueprint 2025 hopes to capitalise on on past momentum whilst introducing new initiatives.

What were the targets in the AEC 2015 Blueprint?
The goal of free flow of investment is a key element in achieving the AEC’s first pillar within the 2015 blueprint, which details the creation of a single market and production base. It should be noted that whilst the liberalisation of trade and other ancillary measures do impact the movement of investment, a stringent focus on direct policies regarding investment will be placed upon this paper. Since 1967, several key agreements and actions were adopted in an effort to remove barriers to investment and facilitate investment flows:

Investment Guarantee Agreements (IGA)
Signed in 1987, the objective of the IGA was to promote greater investment flows between countries by providing a legal framework which defined investment norms and protection. The IGA introduced several basic principles:

ASEAN Investment Area (AIA) Agreement
Endorsed in 1995, the AIA Agreement fostered cooperation, facilitation, and liberalisation within the investment environment of ASEAN. The AIA Agreement introduced reforms to specific sectors on a pre-agreed schedule:

ASEAN Comprehensive Investment Agreement (ACIA)
Coming into effect in 2012, the ACIA improved upon the AIA and IGA by means of several key measures:

AEC Blueprint 2015
The AEC Blueprint solidified the commitments of previous agreements and regrouped policies into a four pronged approach to addressing the freedom of investment:

From a broad perspective, developing economies such as Cambodia and Vietnam have more open policies than developed ones such as Malaysia, Indonesia and Thailand. This is emphasised by Figure #1, which measures FDI restrictiveness on a scale of 0 to 1 with higher scores indicate more restrictive investment policies in a nation.

Following the adoption of the AEC Blueprint 2015 in 2007, the uptake for FDI in CLMV nations has been apparent due to market enabling policies. Figure #2 illustrates that a moderate negative correlation between high levels of FDI and low levels of regulatory restrictiveness.

In particular, it was observed that FDI restrictiveness was relatively higher within the communication and transport sectors. (Thangavelu, 2015).

Since the introduction of the ACIA, the Reservation Lists (RL) for four member states has changed as of the
AEM-18th AIA council Meeting in August 2015:

There is no standardised definition of sensitive industries, allowing for the ad-hoc classification of sectors which are not covered by the ACIA.

Standardisation of investment policies across the region is still a long term challenge made harder by several factors:

What new measures are included in the AEC 2025 Blueprint?
As the ACIA does not posses a concrete timeline and set commitments, the logical step forward would be to formulate these elements in future action plans. This is reflected within the actionable clauses in the AEC 2025 Blueprint,
whereby the focus is placed upon implementing previous commitments and sharpening existing mechanisms for
investment liberalisation. 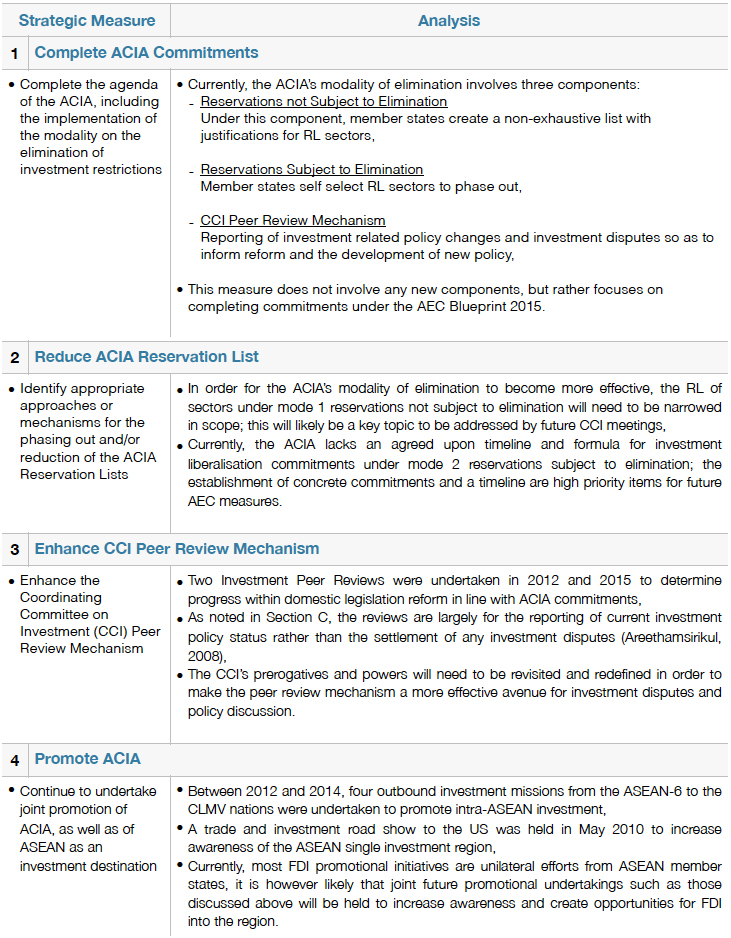 What does the AEC 2025 Blueprint mean in terms of the movement of skilled labor?
ACIA has limited scope as its liberalisation provisions are limited to five sectors and services incidental to these
sectors. The ACIA should broaden its breadth and depth to meet the demand of increasing cross-border investment not limited to the 5 sectors, as the vision of ASEAN gains prominence.

The state of investment liberalisation ultimately depends upon the political capital available to ASEAN member states, where economic conditions, domestic issues, and foreign policy will dictate the success of the ACIA and future endeavours.

In comparison to ATIGA and the AFAS, the ACIA does not posses a definitive list of commitments nor a set timeline for the implementation of policy; this is reflected within the AEC Blueprint 2025 which calls for further clarification to existing modalities and mechanisms.