Liberalisation efforts surrounding the regions banking, insurance, and other financial instrument markets will need to keep up with burgeoning growth in the region; the AEC Blueprint 2025 hopes to continue capitalising upon the success of previous policies.

What were the targets in the AEC 2015 Blueprint?
ASEAN financial integration envisages a well integrated and smoothly functioning regional financial system with more liberalised capital account regimes and interlinked capital markets that will facilitate greater trade and investment flows in the region. This will be achieved through:

ASEAN aims to only achieve semi-integration in the financial sector by 2020. Full integration comparable to the level achieved by the core member countries of the European Union (EU) is deemed to be too ambitious in the next decade. (“Regional Cooperation in Finance”, 2016)

1. Roadmap for Monetary and Financial Integration of ASEAN (RIA-Fin)
Endorsed in 2003, the RIA-Fin articulated ASEAN’s goals and efforts within a roadmap format. The roadmap also affirmed the usage of a positive list modality, which meant that any commitments made would apply only to an explicit list of sectors. The task of integrating ASEAN’s financial sector was divided into four separate areas:

2. AEC Blueprint 2015
Put into effect in 2007, the AEC Blueprint 2015 focused on further clarifying the objectives of financial
integration. Under the blueprint, the “ASEAN minus x” approach was adopted allowing for flexible
commitments. The blueprint also adopted a schedule for financial services subsectors identified for
liberalisation by 2015.

Creating the Market Infrastructure and Regionally Focused Products and Intermediaries

Adopted in 2011, the AFIF continued the blueprint’s initial objectives whilst committing ASEAN to the goal of a
semi-integrated financial region by 2020. Several developments were added in subsequent installments:

5. ASEAN Banking Integration Framework (ABIF)
A framework agreement which was signed in 2015, the ABIF provided a guiding platform for the formation of
bilateral agreements between member states concerning the banking industry. Under the framework, Qualified
ASEAN Banks (QABs), which are defined by the individual bilateral agreements, will be given access to the
markets of member states with the support of central banks.

6. ASEAN Insurance Integration Framework (AIIF)
AIIF was finalised and agreed upon to guide the progressive liberalization to ensure more competitive
insurance markets and greater choice for consumers. Competitive insurance markets will lower the cost of
insuring business risks, which will stimulate economic growth and spur intra-ASEAN trade. ASEAN members
have agreed to prioritise the liberalisation of cross-border supply of Marine, Aviation and Goods in International
Transit (MAT) insurance.

As illustrated by the Figure #1, the disparity in the size of financial institutions and markets in member states
shows a developmental gap between the ASEAN 5 and CLMV nations

As key financial intermediaries for the region, banks make up the bulk of ASEAN’s financial markets and can
be used as indicators of financial services integration through cross border activities.

1. Developmental Gap
The developmental gap which exists between ASEAN financial markets defines and divides the monetary and
fiscal policy goals of each member state. This in turn means that integration efforts are often retarded by
national restrictions and regulations, which is exacerbated by the ASEAN minus x formula.

2. Public-Private Collaboration
The success of ASEAN financial sector integration hinges not only on the policy reform of governments, but
also the efforts of private sector financial institutions and agents. Whilst policy reform has seen progress,
greater efforts will need to be placed on public private sector collaboration in order to see the true benefits of
integration efforts. In particular, a lack of private sector consultations has been highlighted as a key problem
with current policy direction. (Chia, 2011)

3. Translating regional commitments to country policy
Although the broad objectives and overarching regional commitments have been developed, comprehensive
initiatives have been lacking. As ASEAN continues to remain sensitive towards the policy objectives of member
states, various exclusions and exceptions and a time consuming national legislative process have been
marked as detrimental to financial integration. (Chia, 2011)

What new measures are included in the AEC 2025 Blueprint?
The AEC Blueprint 2025 refocuses financial sector integration with new measures relating to financial inclusion and stability; these two new areas largely involve information sharing initiatives and the adoption of best practices with regards to policy. 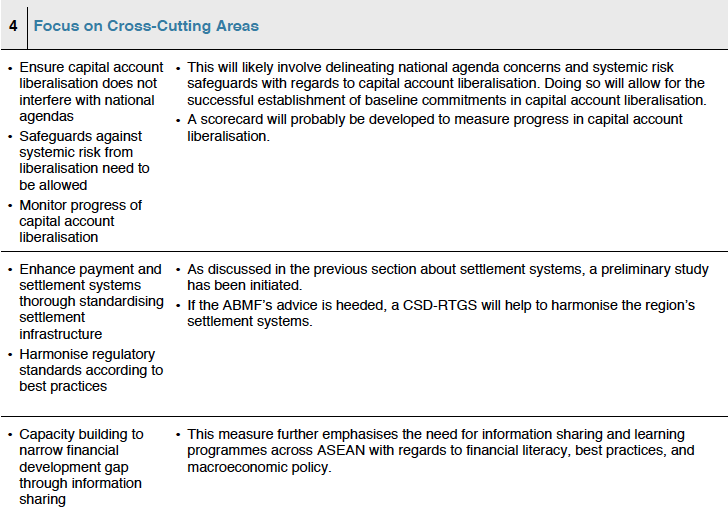 What does the AEC 2025 Blueprint mean in terms of the movement of skilled labor?
Given the development gaps among ASEAN member states, ASEAN has set itself a conservative target for
financial integration. Although the AEC Blueprint 2025 takes a step forward by introducing two new areas of
focus, financial inclusion and stability, the majority of strategic measures offered do not hint towards any big
changes in policy in achieving financial integration.

No central body such as the European Central Bank has been proposed, which continues to confirm that the
AEC’s goals lie towards financial integration tempered by flexibility rather than clear-cut unified policy.

Likely to be further developed under ATISA by 2017, the Blueprint focuses on completing previous objectives
and established initiatives.