A production value chain describes the labor, materials, and processes which go into a product to convert it from conception to consumption ready. In present day economies, value chains are dispersed geographically amongst a myriad of nations in order to capitalise upon the varying technological strengths, resource riches, and human expertise.

A production value chain describes the labor, materials, and processes which go into a product to convert it from conception to consumption ready. In present day economies, value chains are dispersed geographically amongst a myriad of nations in order to capitalise upon the varying technological strengths, resource riches, and human expertise.

Participation in this Global Value Chain (GVC) of fragmented production and consumption is of the utmost importance as it determines the impact the global economy has on a country’s economic resilience, income distribution, knowledge creation, and other non-economic factors such as social and environmental impact.

Whilst enhancing global supply participation in the GVC was the second component of pillar 4, the AEC Blueprint developed in 2007 detailed no explicit measures towards this goal. Instead, it can be said that all initiatives undertaken in the standards harmonisation, the enhancement of regulatory regimes, and trade and investment facilitation have all fed into aiding ASEAN’s position in the GVC.

RCEP
Negotiations began in 2012 towards the development of an FTA which would untangle overlapping bi/multilateral agreements between stakeholders in existing ASEAN+1 FTAs. (DFAT, 2015) Furthermore, the RCEP would help to deepen commitments in the following areas:

This balance in forwards and backwards linkages establish ASEAN as a highly integrated regional bloc in the GVC; this reflects a healthy balance of not only commodity but value added production which is sourced from the region. 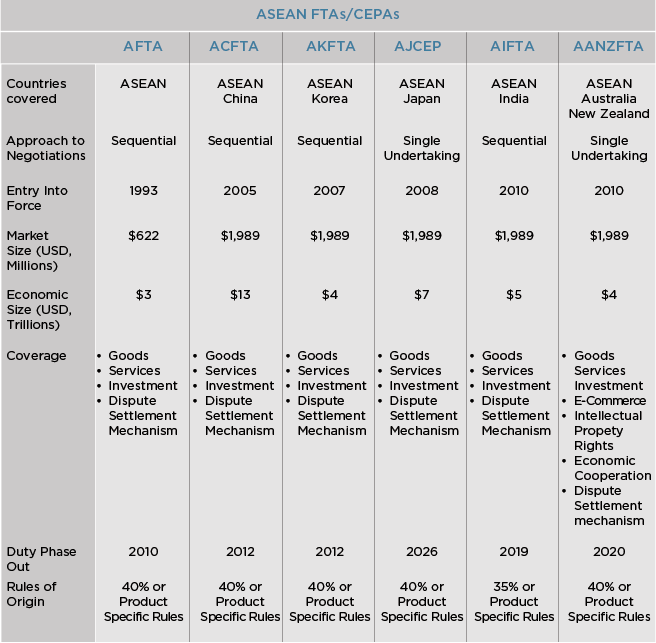 As demonstrated in the table above, six overarching FTAs and CEPs currently apply to ASEAN member states, five of which apply to ASEAN+1 members. These pacts feature the following key characteristics:

Another important shift in ASEAN’s interaction with the GVC would be the passing of the Trans-Pacific Partnership (TPP). Currently, only four ASEAN countries are signatories to the TPP as of 4 February 2016: (BBC, 2016)

ASEAN member states have also taken to signing bilateral and multilateral agreements and Memorandums of Understanding (MoUs) too numerous to cover in a meaningful manner; agreements such as the ACIA, ATIGA, and the AFAS also directly impact ASEAN’s regional value chain, as well as its value proposition in the GVC and have been discussed in previous reports.

C. Current Issues and Challenges
Currently, the RCEP has adopted a single undertaking approach towards its negotiations which has significantly impeded its finalisation; furthermore, the approach eschew’s ASEAN’s recognition that different member states have differing institutional capacities for liberalisation.

The increasing overlap and interlocking of bilateral trade deals between ASEAN states and external nations has resulted in increasingly uneven tariffs which distort trade; whilst the liberalisation of these policies has been viewed as positive, inefficiency may be created due to discrimination against cheaper producers in nations not privy to such deals. (The Economist, 2003)

D. Plans under the AEC 2025 Blueprint
The AEC 2025 blueprint recognises the need for explicitly listed ancillary actions to be adopted in furthering ASEAN’s participation in the GVC.

Whilst no groundbreaking measures have been affirmed, the blueprint calls for the enhancement of existing regional strategies so that they may be expanded towards a more global perspective. 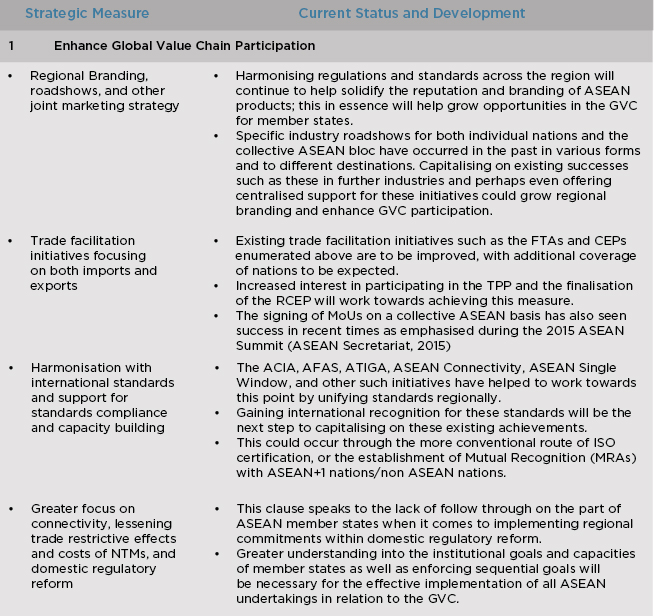 F. Conclusion: Moving Forward with the AEC 2025 Plans
The AEC 2025 Blueprint showcases ASEAN’s desire to look further afield in terms of capitalising on its regional successes and existing ASEAN+1 agreements; however, this has also been tempered with recognition that further action is required in solidifying and enhancing existing GVC facilitating measures.

Key to the enhancement of ASEAN’s participation in the GVC would be the achievement of the finalisation of the RCEP. This common platform agreement would allow ASEAN to apply a “one size fits all” agreement to future interested parties not currently included in negotiations. This is reflected by the bloc’s adoption of a “single undertaking approach”.

Lastly, the blueprint requires much needed specificity in relation to its shift in goals, as whilst recognising that a focus on participation in the GVC may be an important and ultimate goal for ASEAN, actual actionable points have yet to be explored and defined. Given the importance of ASEAN in the global economy, feedbacks from multinational corporations based in the region will be useful in mapping out the strategic measures for ASEAN.