ASEAN consumer protection is relatively new and the previous AEC Blueprint does not make any specific time frame on the implementation of the measures. The new Blueprint has outlined more specific strategies in promoting protection and fair treatment for ASEAN consumers, including the necessary infrastructure to implement those strategies. Member States need to work more on developing the relevant policies and laws, and harmonising them across the region, especially in the case of cross-border dispute settlements.

Competition Policy and Law (CPL)
At its core, ASEAN defines the aims of CPL as institutions and regulations which create a culture of fair competition. Fair competition is a building block of any free market and involves ensuring a level playing field for businesses, regardless of ownership or origin. (ASEAN Secretariat, 2016) CPL legislation may address explicit areas such as monopoly laws, to more general areas cross covered by other AEC initiatives such as foreign ownership laws. This report will illustrate the groundwork achieved by ASEAN and the goals that have yet to be attained in the interests of a fully integrated and functioning AEC.

AEC Blueprint 2015
As at 2007 when the AEC Blueprint 2015 was ratified, only four member states including
Singapore, Indonesia, Thailand, and Vietnam had domestic competition laws and regulatory bodies.

ASEAN Experts Group on Competition (AEGC)
The ASEAN Economic Ministers (AEM) endorsed the establishment of the AEGC in 2007 with the
express purpose of having the body be a forum for CPL discussion and cooperation. This resulted
in the adoption of several best practices and policy guidelines enumerated on the right.

Three main areas of focus in each of the CPL documents were:

The policy guides and plans were emphasised further in a set of region wide socialisation
workshops targeted at government officials and select private sector groups in order to raise
awareness and advocate the adoption of CPL.

Of the four main goals set out by the AEC Blueprint 2015, the first two goals of establishing
domestic competition policies and institutions have not been met in spirit to a larger extent.

At face value, progress seems promising, but it should be noted that the CPL of Myanmar, the
Philippines, Laos, and Brunei have merely ratified CPL legislation, whilst the implementation of
relevant laws are still being revised and deferred. 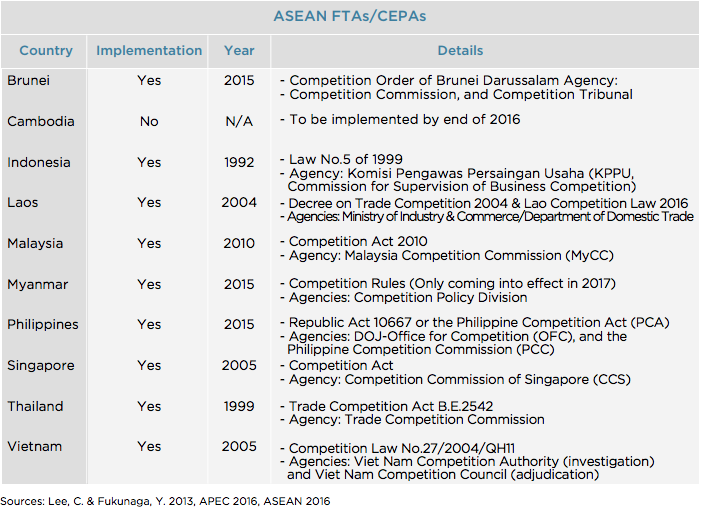 The third goal of the AEC Blueprint 2015, which concerns capacity building initiatives, has
been achieved to a larger extent. Over the course of the first five years of the establishment
of the AEGC, 14 capacity building activities were conducted with the participation of 700 plus
government officials from member states. (ASEAN Secretariat, 2016) 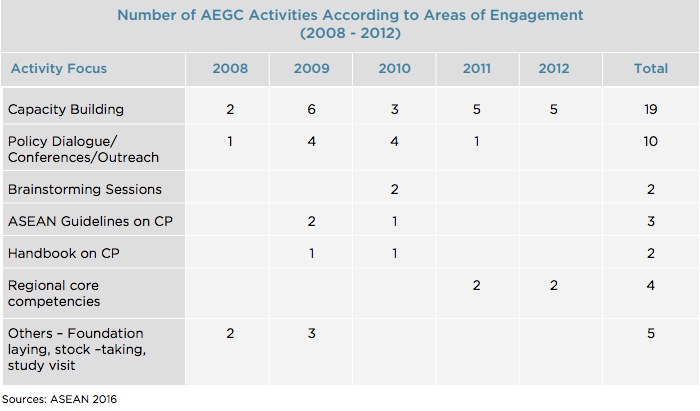 The fourth goal of the AEC Blueprint 2015, which calls for a regional CPL guideline to be
established, was largely addressed by the three main publications released by the AEGC as
outlined above.

A key facet of competition policy would be anti-monopoly laws, which help to maintain a fair
and competitive market. The following statistics help to illustrate that in terms of perceived
effectiveness, Singapore still maintains a lead in the region.

A general positive correlation can be found between the level of development of each member
state and the perceived effectiveness of anti-monopoly policy. 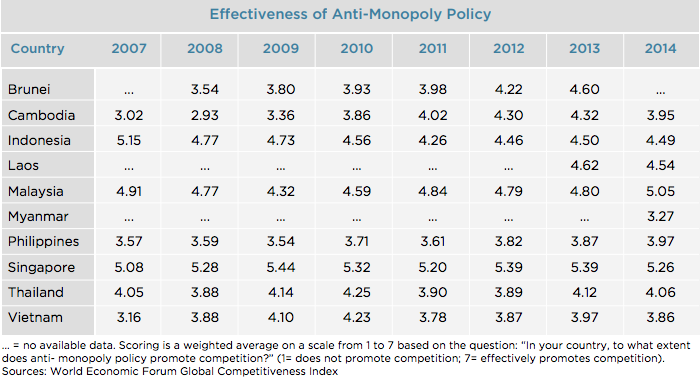 C. Current Issues and Challenges
All member states are expected to have passed their respective CPL legislation domestically by
the end of 2016. Whilst the token policies are in place, the effective adoption and deepening of
general guidelines will be key in achieving ASEAN’s goals concerning competition law.

The effectiveness of CPL legislation amongst ASEAN member states is not currently being
measured. No progress reports nor feasibility studies have been carried out. 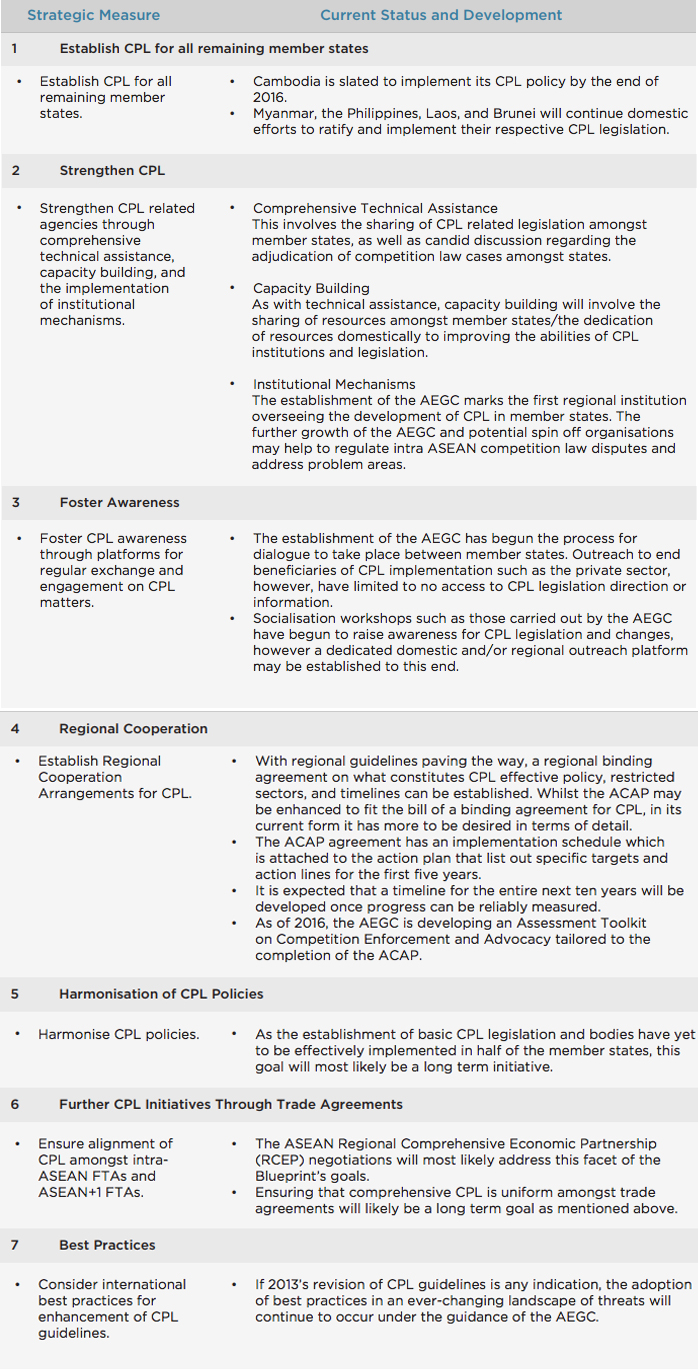 F. Conclusion: Moving Forward with the AEC 2025 Plans
The main focus of the AEC 2015 Blueprint, which was the establishment of CPL institutions and
legislation, has yet to be met as of 2016. Further action will need to be taken and the AEC 2025
Blueprint’s first provision regarding establishing CPL in remaining member states recognises this fact.

The next step would be to conduct an in-depth analysis on the effectiveness of CPL in each member state to provide a basis for the AEGC on how to move forward to further promote CPL in ASEAN.

Though great strides have been made in the area of competition law, more comprehensive
measures need to be taken in defining what constitutes competition law in a binding manner.

Further cooperation and partnership with more advanced economic regions and relevant international organisations will greatly support the implementation of the ASEAN CPL.

Cross-sectoral cooperation with other sectors under the AEC and enhanced dialogue with the relevant industries could ensure that enforcement of CPL can be carried out in a more
comprehensive manner.