ASEAN consumer protection is relatively new and the previous AEC Blueprint does not make any specific time frame on the implementation of the measures. The new Blueprint has outlined more specific strategies in promoting protection and fair treatment for ASEAN consumers, including the necessary infrastructure to implement those strategies. Member States need to work more on developing the relevant policies and laws, and harmonising them across the region, especially in the case of cross-border dispute settlements.

Consumer Protection Policy
In supporting the development of a people-centred economic region, ASEAN has put a high priority
in implementing measures to promote consumer protection. Consumers are an important stakeholder
in the integrated economies of ASEAN and countries have committed to work together to ensure that the rights of the consumers are well protected in the process of integrating the ASEAN economies report provides some useful information in the work that has been carried out by ASEAN Member States, reflecting on the AEC Blueprint 2015, the current challenges and the next stage under the AEC Blueprint 2025.

AEC Blueprint 2015
With the objective of accommodating the interests of consumers in the economic integration of
ASEAN, the 2015 Blueprint outlines three actions:

Under the Blueprint 2015, these strategic actions did not have any specific schedule for
implementation, most likely because it was a very new initiative and was still in its early stages of development and implementation.

In general, the three strategic actions were all implemented to different extents. Member countries have enacted several laws that target the practices by the supply side participants that may harm the interests of consumers.

Following similar initiatives in the European Union (EU), Australia and other ASEAN partners,
ASEAN member states have made significant progress in dealing with practices and conducts that
are misleading, aggressive and unfair. A summary of ASEAN’s relevant laws are shown in the table
below: 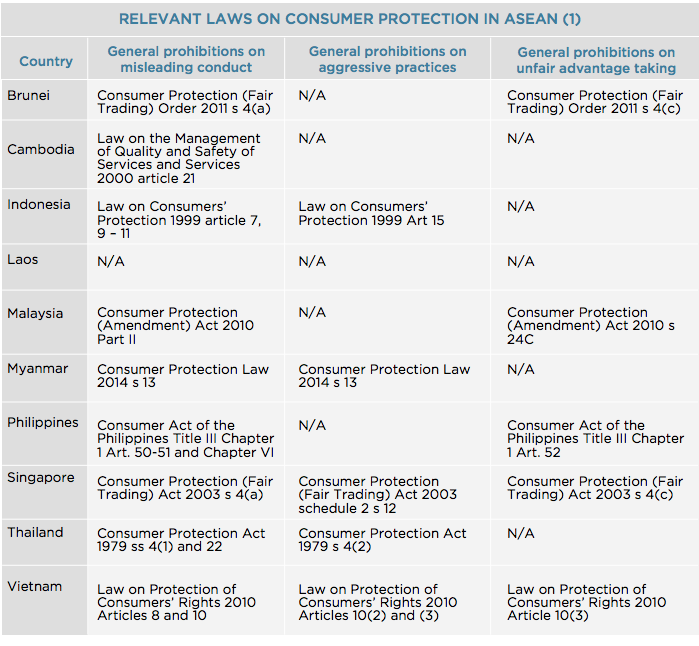 ASEAN have also agreed that there is a need to address the practice of limiting the rights of
consumers in contracts and to ensure that consumers are being treated in a fair manner in every
transaction. The UK and Australia have provided good examples for ASEAN in dealing with issues
related to it. The table below summarises efforts by several ASEAN members: 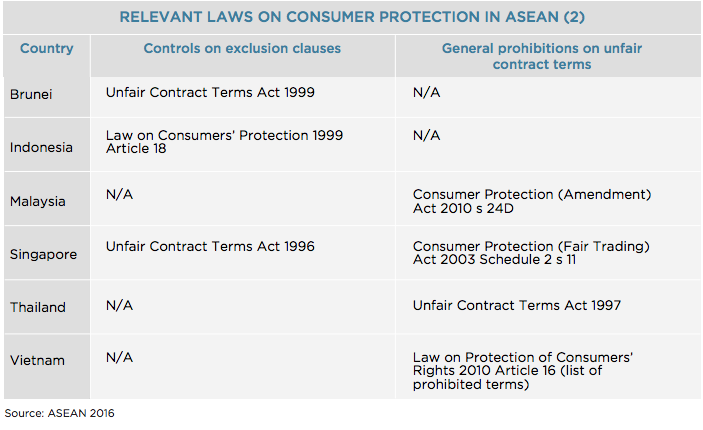 In further promoting consumer protection and ensuring the rights of consumers in ASEAN, the
ACCP has commissioned a study on complaint systems and redress mechanisms for ASEAN (2014). Supported by Australia, the study came up with reports on ASEAN Complaint and
Redress Mechanism Models and Guidelines for the Selection and Implementation of Complaint
and Redress Models. These reports are expected to provide assistance to consumer protection officials in identifying and reviewing the most appropriate models for internal complaint handling systems and external redress schemes for implementation in their jurisdictions.

In addition, Australia also supported a project so support research and dialogue on consumer
protection. The project resulted in two volumes of Consumer Protection Digests and Case
Studies: A Policy Dialogue. These two volumes aimed to enhance knowledge and understanding
of new and emerging consumer protection concerns and to assist the development of policies
based on experiences and lessons learned.

As follow ups to the reports, two ASEAN Consumer Protection Conferences have been held in
December 2014 and December 2015, respectively. The conference served as a platform in the
discussion on emerging issues and identified challenges drawn from the policy digests and case
studies. The conference focused on consumer product safety legislation, the use of warranties
and guarantees, enforcement and remedies, recalls and redress, and institutional design and
effectiveness of consumer and competition agencies.

An important progress in ensuring that consumers are able to voice their concerns and complaints
is the launch of the ASEAN Consumer Portal (www.aseanconsumer.org). the portal allows the
visitors to:

C. Current Issues and Challenges
The remaining one country that is currently still developing its consumer protection laws is
expected to have it completed by end of 2016.

Given that consumer protection is quite a new area under the AEC, ASEAN member states are
in different stages of implementing the necessary measures to promote protection and fair
treatment for consumers in their jurisdictions. It is then imperative that member states are able to coordinate their policies and laws. While significant harmonization has taken place across member states, more can needs to be done in this area.

The current status of liability regimes is still varied across member states, and this may pose
problems especially for small value claims/complaints within the existing dispute resolution
mechanisms.

D. Plans under the AEC 2025 Blueprint
Compared to the AEC Blueprint 2015, the new Blueprint 2025 has shifted and deepened its
priorities to touch upon more pressing issues to develop the infrastructure of ASEAN consumer
protection initiative. The AEC Blueprint 2025 aims to address obstacles that have made it
difficult for ASEAN consumers to receive proper protection and fair treatment such as lack of
supporting policies and laws, low level of awareness on the importance of consumer protection
and on available dispute settlement mechanism, massive gaps in the implementation of consumer
protection across the ASEAN region, and insufficient technical capabilities of officials especially in the newer member states.

While this is a good indicator that member countries are taking consumer protection more
seriously, they need to work more on the implementation side, while continuously consult the
relevant stakeholders that are involved in the provision of fair treatment for ASEAN consumers. 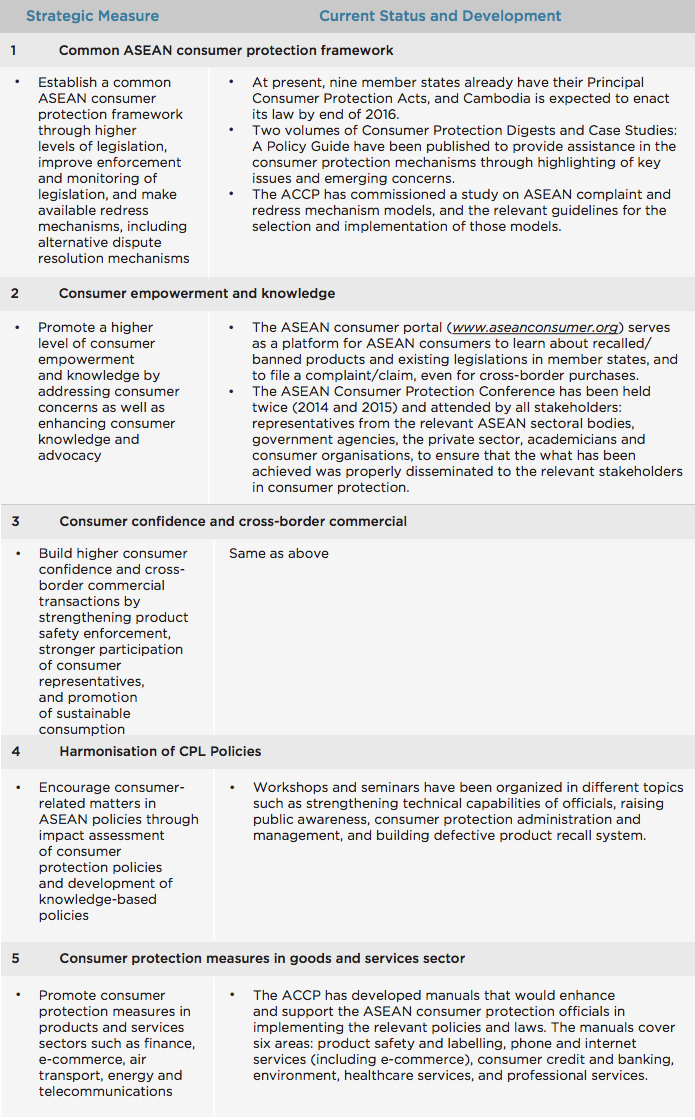 F. Conclusion: Moving Forward with the AEC 2025 Plans
Other ASEAN member states, if necessary, should provide greater support to each other in
developing the laws and policies to promote consumer protection to ensure that the ASEAN
economic integration is really a people-centred community

ASEAN needs to continue to develop the much needed infrastructure in ensuring fair treatment
and protection to consumers. This would cover development and enactment of relevant regulatory
framework, uniform liability regimes across member states and strong institutions that would allow ASEAN consumers to fully comprehend their rights and obligations, to understand the existing policies and laws (including those in other jurisdictions), and to proceed easily and efficiently when lodging complaints and claims.

The ASEAN portal for consumer protection (www.aseanconsumer.org) needs to be continuously
refined and upgraded to make it more informative and user-friendly for ASEAN consumers in
seeking information, consulting with authorities and making claims. This is important given that for cross-border transactions and settlements, the internet is the most useful vehicle and medium.

The workshops and conferences must continue and should involve the private sector and consumer
representatives more in the consultations to ensure that the interests of the stakeholders are well represented in the implementation of the initiative.