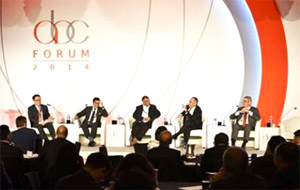 September 09, 2014 – More than 300 leaders from top businesses from across the ASEAN region converged at the ASEAN Business Club (ABC) Forum 2014 on September 8 and 9 to tackle trade and industry issues and support the implementation of one ASEAN Economic Community (AEC).

The critical consideration derived from the forum was the readiness of governments and ASEAN member states for an integrated economic region under the AEC and the role that ASEAN business leaders can play to accelerate these efforts and harness ASEAN’s potential.

In his opening address, ASEAN Business Club Forum Chairman and Group CEO of AirAsia Tony Fernandes stressed the importance of co-operation between the public sector and businesses in the region as well as a stronger ASEAN secretariat in order to capitalise on ASEAN’s progress. “We need to help the lawmakers facilitate businesses and not impede their growth.”

The Guest of Honour at the forum was Lim Hng Kiang, Minister of Trade & Industry. Echoing the Chairman’s remark, he emphasised the need for eliminating non-tariff barriers as an essential element of a prosperous and fully integrated ASEAN nation.

“ASEAN is not only about inter-government discussions. Businesses play a critical role in telling us where the barriers to trade lie and where the bottlenecks in our regional and global value chains are.”

I consider one of the most promising aspects for our future is ASEAN’s engagement with the business sector. As the engine of economic growth, businesses are well-positioned to provide important feedback to policymakers on the effectiveness of our interventions.”

In a similar format as the inaugural Network ASEAN Forum last year, the two-day forum saw another six Lifting-The-Barriers Roundtables, a sector specific analysis of the current trade barriers and bottlenecks impeding an integrated market.

The targeted sectors this year were Legal & Tax, championed by ZICOlaw and EY, Automotive & Manufacturing championed by Jardine Cycle & Carriage and AAPICO, Financial Services & Capital Markets, headed by CIMB and DBS, Minerals, Oil & Gas by SapuraKencana & Ilthabi Rekatama, Food & Beverage Industry spearheaded by FIA & AFBA, and Retail, championed by Lippo Group & IMI. The discussion points stemming from the forum will then be incorporated into Lifting-The-Barriers reports, a set of white papers, which will be submitted to the relevant ASEAN policy bodies.

“We need to take stock of and tackle the non-tariff-barriers, which are the real inhibitors of ASEAN integration and submit to the governments, in particular Malaysia – the Chair of ASEAN 2015,” said Nazir Razak, Chairman of CIMB Group.

“Governments have to get serious about private sector participation in building the AEC. The private sector has to get effectively organized to lend their ideas and support to the process. There are shortcomings on both sides. A well structured, professional and specialized structure of private sector input on a consistent basis is therefore absolutely necessary. The ABC proposal on this score should be taken up.”

The forum also saw the debut of Idea Capsules, featuring 8 innovative talks focusing on emerging startups from around the region and beyond. This is a new addition to the ABC Forum and underlined the importance of start-ups and SMEs in the ASEAN agenda.

The ABC 4th Annual Gala Dinner was held alongside the forum. Speakers at the dinner included His Excellency Ambassador Kirk Wagar, U.S. Ambassador to Singapore who spoke about America’s continued and significant contribution and support to the ASEAN integration agenda. Former Vice Chancellor of Germany, Dr. Philipp Rösler, who is the Managing Director and Member of the Managing Board of the World Economic Forum, gave a speech on transformation in a disruptive world.