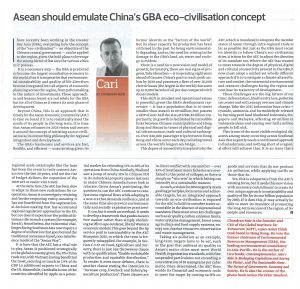 I have recently been working in the Greater Bay Area (GBA), evaluating how the concept of the “eco-civilisation” – an objective of the Chinese central government – can be applied to the region, given the bold plans to leverage the strong blend of features the various cities in it possess.

It is a necessary step – the GBA is predicted to become the largest conurbation economy in the world, thus it is imperative that environmental sustainability and quality of life directives become integrated into all aspects of economic planning across the region, from policymaking to the nature of investments. These approaches and lessons learnt are not solely for the GBA but for all of China as it enters its next phase of development.

Beyond China, this is an approach that is timely for the ASEAN Economic Community (AEC) to take on board if it is to realistically meet the needs of its people in the long-term. It is time that ASEAN reframes its 2025 vision and centres it around the concept of initiating an eco-civilisation as its overarching philosophy for regional integration and development

The GBA’s businesses and services are fast, flexible, and efficient – unsurprising given its former identity as the “factory of the world”. But its sheer capacity for production has been criticised in the past for being environmentally degrading, and so, the need for reining in the damage to the GBA’s land, air, water and ecology is evident.

There is a need for a new vision and model of growth; fortunately, there are real signs of progress. Take Shenzhen – it is operating eight years ahead of Greater China’s goal to reach peak carbon by 2030 and possesses a fleet of over 16,000 electric buses (the largest in the world) that saves up to 8,000 barrels of oil per day compared with diesel models.

This shift in mindset and operational values is powerful, given the GBA’s development repertoire – it has a population 10 times smaller than ASEAN’s at 69 million, but possess a GDP of over half the size, at US$ 1.8 trillion. Importantly, its growth is facilitated by incredible links between Chinese municipalities and Hong Kong and Macau in terms of physical and digital infrastructure, trade and cultural exchanges. Over 640,000 passenger trips between Hong Kong and China occur each day, including travel across the world’s longest sea bridge.

This degree of connectivity is aspired to by the AEC, which is mandated to integrate the member states of ASEAN through intra-regional trade as far as possible. But just as the GBA must recast its identity to follow China’s eco-civilisation drive, it is time for the AEC to adjust the direction of its mandate too. Where the AEC has wanted to move towards the degree of physical, digital and cultural connectivity present in the GBA, it now must adopt a unified yet wholly different approach if it is to navigate a climate-altered future and combat the existential environmental and resource challenges facing the region and continue its trajectory of development.

These challenges are the big hitters of our time: deforestation, biodiversity loss, pollution (air, water and soil), energy overuse and climate change. Take the 2015 Indonesian haze crisis – cyanide, ammonia and formaldehyde released by burning peat land blanketed Indonesia, Singapore and Malaysia, affecting 40 million in Indonesia alone and causing over half a million people to fall sick.

This is one of the more visible ecological disasters among many occurring across Southeast Asia that urgently needs a coordinated approach to find solutions, and nothing short of a regional effort will achieve that. It is an irony that a regional-scale catastrophe like the haze has been the event to truly connect ASEAN over the last 20 years, not the rise of budget airlines, the expansion of the internet or easier visa travel.

At the same time, the AEC has been slow to adapt to these new realisations for cooperation. ASEAN is a sovereignty-retaining and border-respecting entity, meaning it has not benefitted from the supranational decision-making that has accelerated regional regulatory approaches in the EU, but nor does it experience the political divisions rife in such a system (for example, Brexit). Nonetheless, the existential challenges facing Southeast Asia now require a degree of unification that goes beyond the traditional consensus-based, non-interference model of the “ASEAN Way”.

It is here that the AEC has a vital role to play. ASEAN is positioned strategically in the global economy given the US-China trade war, with Vietnam having benefitted the most, securing as much as 7.9% of its GDP in additional exports to China and the US. Meanwhile, Cambodia is one of the countries identified by Apple as a potential market for relocating 15% to 30% of its operations from China. Similarly, Thailand saw a jump of nearly 32% in Chinese FDI in its industrial property spaces in 2018 as major Chinese manufacturers look to relocate. Given ASEAN’s positioning, the question is, can the AEC continue to catalyse intra-regional flows while adapting to a new era that demands resilience, and at the same time also prevent environmentally and socially exploitative practices?

It can, but it needs an overhaul. It needs to develop a framework that guides ASEAN’s free market rather than simply abolishing tariffs to ape outdated, liberal Western economic models. This goes beyond the lip service paid to sustainability in the AEC Blueprint 2025, in which the term is frequently misapplied. For example, in section C.5.57 on Food, Agriculture, and Forestry, there is just one throwaway clause with no qualification: “Enable sustainable production and equitable distribution”. To render it even more defunct, there is another clause stating the intention to “increase crop, livestock, and fishery/aquaculture production”. These clauses are in direct conflict with one another – over 65% of Southeast Asia’s fisheries are overfished to the point of collapse, so there is simply no ‘win-win’ in which fishing can intensify in a sustainable manner.

As such, a vision for 2050 urgently needs guiding principles, focus areas and achievable targets, for an integrated approach towards an eco-civilisation is required for the AEC to hold its member states accountable in the absence of supranational mandates. These must cover key challenges such as air quality, carbon emission limits, water systems management, forest cover, agriculture and food supply systems, energy use, marine resources conservation, and waste management.

Taking air pollution as an example, long-term targets have to be set, such as the goal that ambient air quality in ASEAN’s major cities must meet World Health Organization standards, with fine suspended particulates not exceeding a concentration of 30 nanograms per cubic metre. Once determined, the AEC then wields its financial and economic tools to meet the target, by cutting tariffs on goods and services that do not produce air pollution, while applying tariffs on those that do.

Yes, this is a departure from the AEC’s existing focus, but it needs this new vision with necessary commitment to create its own unique approach to sustainability and quality of life for its population of one billion population by 2050. If it does this, it may actually be able to meet its mandate of promoting the long-term success of the region; of its people and resources.