No change in policy rate; Rupiah RR lowered by 50bp
Bank Indonesia (BI) left the 7-Day Reverse Repo Rate unchanged at 6.00% for the seventh consecutive meeting, as expected. The central bank opted to lower rupiah reserve requirement (RR) for conventional and Islamic banks by 50bp to 6.00% and 4.50%, respectively. The average reserve requirements remain at 3.00%. The new RR will be effective from 1 Jul 2019. Governor Perry Warjiyo indicated the cut in RR would provide an additional Rp25tr of liquidity in the banking system.

Dovish global monetary policy opens room for BI to cut…
Over the past few months, the central bank has been resorting to measures other than the policy rate to support growth, most of which centred around ensuring adequate liquidity in the banking system. A few developments have ticked the boxes for a lower policy rate, including 1) the need to support domestic demand in view of downside risks to global growth, 2) stable inflation rate (2.8% yoy in 5M19 vs. 3.2% yoy in 2018), and 3) dovish global monetary policy, with the US Federal Reserve signaling interest rate cuts. The only deciding factor is current account deficit (CAD), which was the main reason for BI’s reluctance to join many emerging economies in easing policy rate for the time being. The Governor highlighted that the rate cut is “a matter of time and magnitude, which we expect to be guided by trade/CAD performance.

…as soon as in August
CAD is expected to widen in 2Q19 (2.6% of GDP in 1Q19) amid seasonal factors as well as weaker trade balance performance. Following the record-high trade deficit of US$2.5bn in April, we expect trade balance in May, which will be released on 24 Jun, to remain in deficit, albeit at a lower magnitude of US$1.5bn. We see CAD improving in 2H19, hence opening the room for BI to lower 7DRRR by 25bp in its 21-22 August Board of Governor’s meeting.

7DRRR revised lower to 5.50% by end-2019
Nonetheless, given its twin deficit position and high foreign shareholding in its equity and bond markets, we do not expect an aggressive easing cycle. We pencil in one cut in August and one in 4Q19, bringing the 7-Day Reverse Repo Rate (7DRRR) to 5.50% by end 2019. 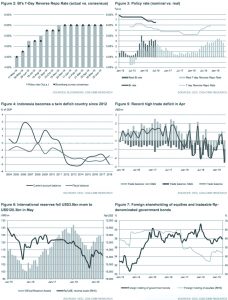 Originally published by CIMB Research and Economics on 21 June 2019.