Home / News & Views / Chairman's Column / Belt and Road Initiative: Is it all about China?

Belt and Road Initiative: Is it all about China?

Belt and Road Initiative: Is it all about China?
Originally published in TheEdge Malaysia, 23 – 29 April 2018 edition. 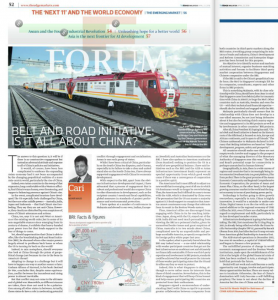 The answer to this question is, it will be if there is no constructive engagement but instead an adversarial attitude and response to all of China’s policies and initiatives.

It would, of course, have been less complicated to embrace the expanding Asian economy had it not been accompanied by the changing geopolitical realities of a more Asia-centric world, particularly the rise of China.

Indeed even Asian countries in the sweep of that expansion, long comfortable with a Western affinity, find China’s ways clumsy, even threatening, and support a balancing presence against China’s rise.

In the event, complicated tensions have developed. The US especially feels challenged by China, but there are other middle powers – Australia, India, Japan and Indonesia – who find China’s rise foreboding. They say they are not anti-China. However, they clearly are disturbed by, even suspicious of, some of China’s utterances and actions.

China, too, says it is not anti-West or America or the existing world order, but in some of its non-negotiable stances since emerging from its century of shame, it exhibits that heavy-handed great power iron fist which lends support to fear of things to come.

Yet, should opportunities that China is able to offer, like the breathtaking Belt and Road Initiative (BRI), be shunned when other major powers largely attend to problems back home or when the US is turning its back on the world?

Indeed, to mix metaphors, should everyone else look at China through the prism of geopolitical change just because its rise is the bone in America’s throat?

Adapting to change is a challenge but it will have to happen one way or another sooner or later. Graham Allison of Harvard, in his book Destined for War, concludes that, despite some equivocation, conflict between the incumbent and rising power is almost inevitable.

But that conflict may not come to the ultimate end of global war. Meanwhile, as different stances are taken, there does not need to be a polarisation among all other states in between. Actually, those states do have a role in moderating potential conflict through engagement and socialisation. Asean is one such group of states.

With respect to the BRI, apart from the obvious infrastructure developmental impact, I have advocated that a process of engagement that is robust and professional, would also expose China to other dimensions in development – such as recipient country’s needs and fiscal capabilities, global measures in standards of project performance and environmental protection.

I have spoken at a number of conferences in Malaysia and abroad to our own, Indian, European (Swedish), and Australian businessmen on the BRI. I have also spoken to American academics (from Stanford) seeking to position the US in a world of new geopolitical balance. I have said initiatives such as the BRI (and the AIIB – Asian Infrastructure Investment Bank) represent an epochal opportunity from which good would come if there was a convergence of cooperation in a positive spirit. 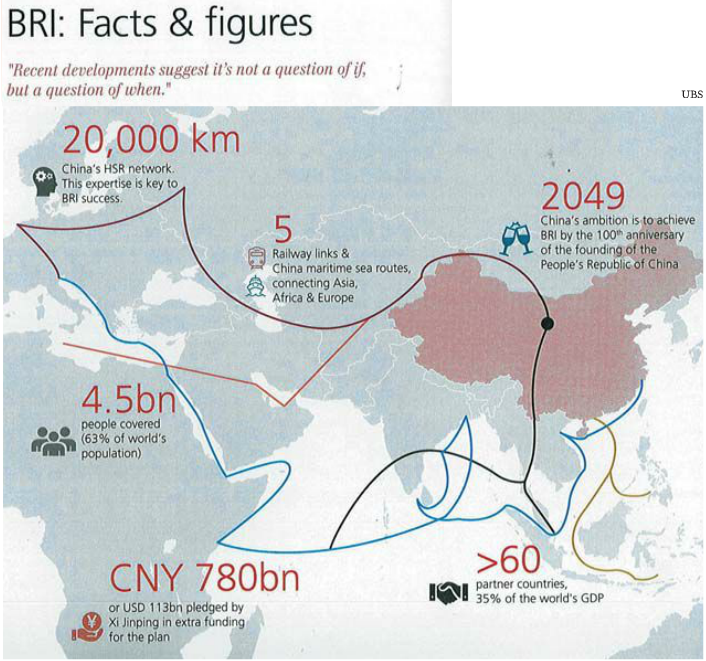 The Americans find it most difficult to adjust in a new world that is emerging, most of all one in which US dominance would no longer be overwhelming. Thus, the Americans find it difficult to come to terms with the AIIB, which is dominated by China even if by persuasion the US can muster a majority against it. It lends support to a suspicion America cannot countenance any change which subtracts from its remit in the Breton Woods system.

Thus, America’s allies are discouraged from engaging with China in its far-reaching initiatives. Japan, along with the US, stayed out of the AIIB. India did not need much persuading from viewing the BRI as a poisoned chalice, given its unresolved border issues and great suspicion of China. Australia is in two minds about China, complicated now by an unpredictable and perhaps unreliable America, as openly recognized in its foreign policy white paper last year.

In the upshot what is precisely feared about the BRI may indeed occur – a one-sided relationship with weaker participant countries which get not the best infrastructure at exorbitant cost ultimately not financially sustainable. If there was third-party expertise and involvement in BRI projects, standards could be achieved that would preserve the interests of those weaker participating states which the US and its allies say they so want to protect.

Indeed, this is what Singapore is doing, although to serve rather more its interests than those of third countries. Nevertheless, this is the kind of engagement which will keep China honest and help ensure participating BRI countries are protected from their enthusiasm.

Singapore signed a memorandum of understanding (MoU) with China April 8 to promote greater collaboration between companies from both countries in third-party markets along the BRI routes. A working group comprising the ministry of trade and industry, China’s Development and Reform Commission and Enterprise Singapore has been formed for this purpose.

Its objective is to identify sectors and markets of mutual interest, organize business-matching activities and forums to facilitate third-party market cooperation between Singapore and Chinese companies under the BRI.

If the BRI is said to be China’s geopolitical tour de force, the MoU is Singapore’s strategic lift for its companies, consultants, experts and other firms in BRI projects.

This is something Malaysia, with its close relationship with China, should have done. Bear in mind Singapore came from behind, after its traumatic time with China in 2016-2017, to forge the MoU. Other countries such as Australia, Sweden and even the US – with their technical and financial expertise – should also be involved and engaged with the BRI.

Malaysia particularly should ensure that its relationship with China does not develop in a one-sided manner, by not just being defensive about it but also by inviting third country expertise and engagement in its BRI projects as well as by involvement in other countries’ BRI projects.

After all, China’s President Xi Jinping has said: “China’s Belt and Road Initiative is based on the historic roots of the Silk Road, is focused on Asia, Europe and African continents, and is open to all friends.” The Chinese ambassador to Malaysia declared in February that Beijing initiatives are based on “shared development, progress, safety and prosperity”

All countries should make sure these are not empty words. Involve and engage in the prospect of what the managing director of the Monetary Authority of Singapore sees this way: “The Belt and Road’s potential scope for connectivity is perhaps unmatched in human history.”

Geographically, in Asia, there is a wide canvas of regions and countries which are increasingly being interconnected. Southeast Asia is a great platform, if far from being perfect. There is the great promise of the Asean Economic Community and Regional Comprehensive Economic Cooperation the promise of Asean and Asean Plus. China , on the other hand, is the largest growing consumer market in the world, the largest economy in terms of purchasing power parity.

Technology is further going to drive growth everywhere, especially in Asia. China is highly innovative. It would be a mistake to under-rate China. Digital Asean is on the rise, with estimated addition to regional economy of US$1 trillion by 2025, even if there are challenges with regard to employment and skills, particularly in its less developed member states.

Infrastructure development is going to be breathtaking. The BRI, first mentioned by Xi Jinping in 2013, is already being rolled out, while Trans Pacific Partnership (despite TPP 11), pursued by Barack Obama from 2010, has fallen back as Trump retreats from American global leadership to America first.

The AIIB started operation in December 2015, has over 60 members, a capital of US$100 billion and has begun to finance a few projects.

The unfulfilled promise of change in world economic management and the Bretton Woods institutions, made upon the establishment of G20 at the height of the global financial crisis of 2008, has been realised in Asia, a strategic foothold that portends the future.

Denial will not work and could become a costly opportunity cost. Engage, involve and participate. Many opportunities beckon. There are many values to inculcate. Otherwise, the fear of China’s domination will truly become a self-fulfilling prophecy. The issue is not about the decline of America but the rise of China and Asia.