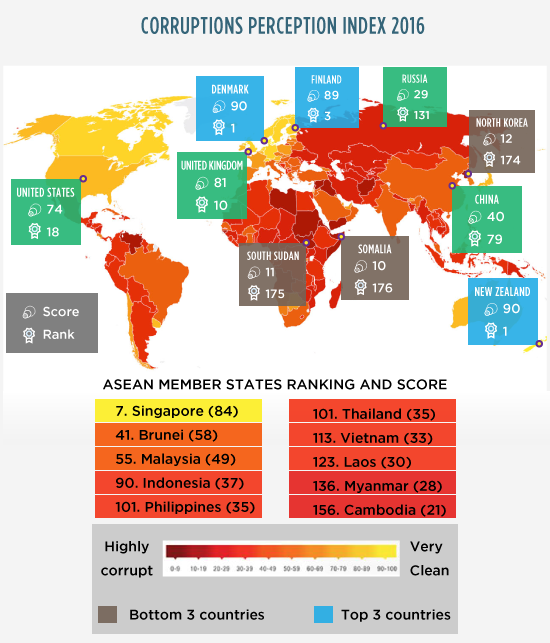 Myanmar’s Foreign Direct Investment Recedes
“Global Economic Prospects” by The World Bank highlighted Myanmar’s economic slowdown with growth forecast for 2017 revised downward by 1.5 points to 6.9%. The cut came after the country, which used to enjoy the fastest growth rate in Southeast Asia, lagged behind the Philippines, Laos and Cambodia in 2016. The World Bank attributed the falling growth rate to the sluggish real estate market and slower export expansion. However, chief economist at DMS, a wholly owned Myanmar subsidiary of Daiwa Institute of Research Holdings, said that the main reason of the decreasing growth rate is due to declining foreign investment, which was reduced by 28% from April to December 2016 when compared to same period in 2015.
Source: Nikkei Asian Review (18 January 2017)

Cambodia Worst in Southeast Asia, Malaysia and Thailand Drops while Singapore, Laos, Vietnam and Myanmar Improved in Corruption Survey
Thailand’s ranking in the Corruption Perception Index (CPI) plummeted from 76th in 2015 to 101st among the 176 countries assessed in 2016 by Transparency International. Malaysia dropped one point, ranking 55 with a score of 49 out of 100. Singapore improved its ranking to seventh for 2016 with a score of 84 (eighth with a score of 85 in 2015) while Laos rose to 123 compared to 139 in 2015 and Myanmar is currently ranked 136 with a 11-point increase compared to the previous year. However, Cambodia continues to languish in the lower reaches of the CPI as the country retains its position as the most corrupt ASEAN country, as well as the third most corrupt country in the wider Asia-Pacific region, ranking 156th out of 176 countries. The index, which focuses solely on corruption within the public sector, is based upon the perception of experts.
Source: Transparency international (25 January 2017)

Singapore Top in Asia-Pacific for Talent Competitiveness
The Indonesian government is preparing new measures to help narrow the wealth inequality gap in order to improve consumer demand, which is essential to encourage more private investment and help the Indonesian economy grow above 5%. The policies, which include a plan to tax idle plot of lands, are expected to be issued in the next few months.
Source: The Jakarta Post (25 January 2017)

Vietnam to Launch e-visas for 40 Countries
The Vietnamese government has announced a two-year pilot plan to launch an electronic visa system for foreign tourists visiting the country. Under the programme, citizens from 40 countries will be eligible to apply online for the 30-day, single entry e-visas starting on 1 February 2017. Visitors can touch down at any of Vietnam’s eight international airports or arrive via land at 13 international border gates and via sea at seven ports across the country. Tourism authorities are expecting to receive 11.5 million foreign arrivals this year, up 15% from 2016.
Source: Reuters (16 January 2017)

Cambodia’s Economy to Grow at 7% in 2017
Despite the uncertainty over the global economy, Secretary of State at the Ministry of Economy and Finance (MEF) said that he expects Cambodia to continue its GDP growth at 7% in 2017. According to the ministry’s projections released on 23 January, Cambodia’s GDP will reach US$22.3 billion this year, with agricultural sector increasing by nearly 2% and service sector by 6.3%, while the industrial sector is pegged to expand by an impressive 10.7%. Total FDI into Cambodia reached US$2.15 billion in 2016, a 25% increase over 2015, with China remaining as the largest source of foreign capital inflow, contributing US$511 million.
Source: The Phnom Penh Post (24 January 2017)

Singapore Manufacturing Output in December 2016 Best in 5 Years
According to figures from the Economic Development Board (EDB) on 26 January, Singapore’s manufacturing output in December surged 21.3% from a year ago, about twice as much as the 10.4% growth analysts initially expected and the strongest monthly performance since December 2011. Manufacturing, which makes up about one-fifth of the economy, has been stuck in a protracted cyclical downturn amid lackluster global growth. December’s unexpectedly robust performance was due largely to spikes in both electronic and biomedical output, the two largest components of manufacturing.
Source: The Straits Times (27 January 2017)

Philippines Posts One of World’s Fastest Growth Rates
President Duterte concluded his first six months in office on a positive note as the Philippines saw one of the fastest growth rates in Asia in 2016. Data published on 26 January by the Philippines Statistics Authority showed that the economy grew 6.6% in the final quarter of 2016, pushing growth for the entire year up to 6.8%, faster than China’s 6.7%. Key drivers of growth for the quarter were manufacturing, trade, real estate, renting and business activities, while the industrial sector saw the fastest growth at 7.6% on-year. The Economic Planning secretary in the Philippines also said that is highly likely that the country will achieve its 6.5-7.5% economic growth target for 2017.
Source:Bloomberg (27 January 2017)

Malaysia-China Trade Likely to Rise to US$100 billion in 2017
Malaysia’s International Trade and Industry Minister 2 said that after the value of Malaysia-China trade fell to US$86.7 billion in 2016 due to the depreciation of the ringgit, he is optimistic that his country will be able to achieve better trade with China in 2017 as there is a lot of potential for growth. Malaysia and China on 23 January signed a MoU that aims to strengthen communication and cooperation between media organizations in both countries by leveraging on China’s One Belt, One Road initiative. The Minister anticipated that the agreement would support the export of creative contents to China, which had contributed RM9.55 billion and represented 6.4% of the total GDP of Malaysia last year.
Source: The Malay Mail Online (23 January 2017)

Thailand Economy May Grow Faster Than 3.4%
According to a senior ministry official on 25 January, Thailand’s economy in 2017 could grow faster than the finance ministry’s forecast of 3.4%, facilitated by extra government spending, better oil prices and improved exports. Earlier in January, the Thai government approved an additional US$7.7 billion in spending for the current fiscal year. On 24 January, the central bank of Thailand said that they are keeping its 2017 growth estimate at 3.2%.
Source: Business Times (25 January 2017)

Laos to Help Cambodia in Drugs Crackdown
On 24 January, Foreign Minister of Laos pledged to assist the Cambodian government’s effort to curb drug abuse and trafficking by better policing a border that is a major entry point for drugs into Cambodia. Laos has long been a hub for drug trafficking in Southeast Asia, sharing porous borders with Myanmar, Thailand, Cambodia, Vietnam and China.
Source: Cambodia Daily (25 January 2017)

Myanmar Aims More Investment in Responsible Tourism
Myanmar’s Minister of Hotels and Tourism said that the country is heightening calls for more responsible and sustainable investment in its tourism sector during the ASEAN Tourism Forum 2017 in Singapore, which ran from 19 to 21 January. The government of Myanmar is promising to make ways for privileged and preferential treatment for investors in the sector. According to the ministry, foreign direct investment in Myanmar’s hotel and tourism projects has reached almost US$3 billion in 2016, with Singapore topping the list as the biggest investor.
Source: Yahoo Finance (26 January 2017)