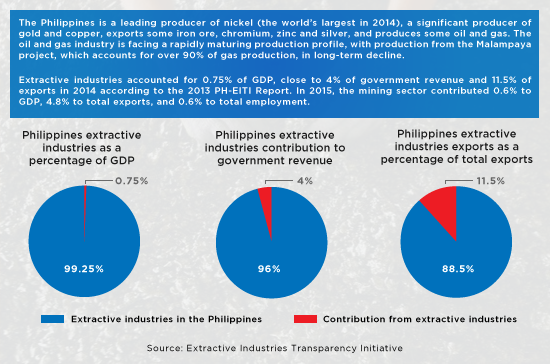 Philippines crackdown in mining industry draws criticism
Filipino Environment Secretary Gina Lopez is the subject of much criticism from the country’s mining industry. Since her nomination to the position of Environment Secretary in June of 2016 she has had 41 firms audited and closed or suspended 30 mines across the Philippines. This has halved the nickel output of the country. In February this year, the Chamber of Mines of the Philippines said that her actions would result in a reduction in mineral output by an equivalent of 70 billion pesos (US$1.39 billion) and government tax revenue by 20 billion pesos (US$0.4 billion), while placing 67,000 jobs at risk.
Source: Nikkei Asian Review (30 March 2017)

Bank Negara’s crackdown on currency sees flight of foreign investors
While the ringgit has now stabilised since its 19 year low in January, Bank Negara’s crackdown has seen a reduction in foreign ownership of bonds in the country. The central bank had taken steps earlier in the year to prevent the short-selling of bonds which resulted in US$ 8 billion of capital leaving the country. With the currency stabilising the authorities are now seeking to ease the restrictions.
Source: Bloomberg (29 March 2017)

Hollande pledges US$ 2.6 billion to Indonesia
French President Francois Hollande pledged US$ 2.6 billion of investments in the areas of energy, infrastructure and retail to Indonesia on his visit to the country this week. President Joko “Jokowi” Widodo and his French counterpart also witnessed the signing of five memorandums of understanding covering defense, sustainable urban development, research, technology and tourism, and also agreed to increase cooperation on maritime issues, fisheries and creative industries such as film and fashion. Jokowi also expressed gratitude that the French government had not proceeded with a plan to nearly triple a tax on palm oil to 300 euros (US$327) a ton.
Source: ABC News (29 March 2017)

Bank of Thailand holds key rate despite IMF call to ease
Bank of Thailand’s monetary policy committee members unanimously voted to maintain the one-day bond repurchase rate at a near record low level of 1.5 percent. BoT pursued this plan despite calls from the IMF to reduce rates and inject a fiscal stimulus into the economy in order to support growth. The IMF’s recommendation comes as Thailand’s growth rate is lagging behind that of its ASEAN neighbours. However, BoT is confident that despite the unchanged rates the Thai economy will grow this and next year.
Source: Bloomberg (29 March 2017)

Vietnam’s Q1 growth slowest in three years
Vietnam’s economy grew at a slower than expected rate in the first quarter of 2017. The country’s GDP grew by 5.1 percent, falling short of economists’ projected growth of 6.25 percent. This could possibly be to a slowdown in export growth and weaker industrial output. March exports grew by 12.8 percent which was lower than the expected 13.3 percent and down from February’s rate of 15.4 percent, according to Vietnam’s General Statistics Office.
Source: Financial Times (29 March 2017)

Myanmar elections to take place on 1 April
With a predicted two million to cast their votes in the Myanmar elections this weekend the National League for Democracy looks set to win without much trouble. This is despite the party’s tough first term as elected government with falling investments, the violence in Rakhine state and questions about the leadership style of NLD de-facto leader, Aung San Suu Kyi.
Source: Nikkei Asian Review (29 March 2017)

British trade mission to ASEAN
The UK Department for International Trade (DIT) trade mission met with the Asian Development Bank to explore how it could access projects related to education, energy and infrastructure in the region. DIT said that ASEAN, with its steady economic growth, increasing market reforms and expanding consumer activities, is an attractive region for investment for British businesses. The delegation is currently visiting Myanmar. According to the Directorate of Investment and Company Administration (DICA), UK investment in Myanmar was at US$3.4 billion as of June 2016, accounting for 6.4 percent of the country’s total foreign investment.
Source: Myanmar Times (28 March 2017)

ASEAN-New Zealand meeting discusses trade agreements
Senior Officials from ASEAN and New Zealand meet in Christchurch on 23 March for the 24th ASEAN-New Zealand Dialogue. During the meeting both sides agreed that they were benefiting from their current economic times but were of the opinion that economic ties had to deepen. The ASEAN-Australia-New Zealand Free Trade Area Agreement is due for review in June 2017 and will be assessed to ensure that it remained modern and of high quality. Both parties also agreed that there was an urgent need to conclude the Regional Comprehensive Economic Partnership but not at the expense of securing a high quality agreement.
Source: ASEAN Secretariat (23 March 2017)

World’s first physical data exchange launched in Malaysia
The ASEAN Data Analytics Exchange (ADAX) launched its operations Malaysia. The idea is to provide a space and platform for regional experts in data and to conduct research and innovate new data technologies. The initiative is led by a Malaysian government agency known as Malaysian Digital Economy Corporation (MDEC) and is a part of a plan to turn Malaysia into ASEAN’s big data analytics hub by 2020. ADAX’s largest funder is the Malaysian Human Resource Development Fund which is under the Malaysian Ministry of Human Resources.
Source: TechWire Asia (29 March 2017)