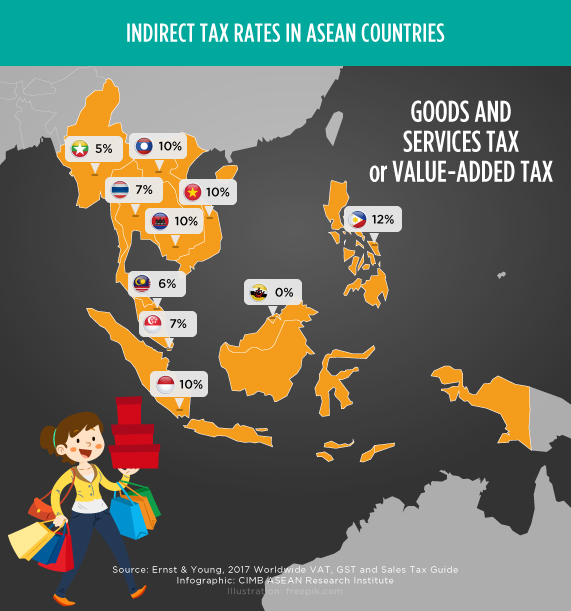 Finance ministry proposes to increase value-added tax
(16 August 2016) The Finance Ministry of Vietnam has put forward a proposal to increase value-added tax (VAT) to 12% in 2019 from the current 10% to reduce the public debt. There is also a proposal to push VAT up to 14% in 2012. The ministry predicts that public debt will reach 64.5% of growth domestic product in 2017. If the Vietnamese government approves the proposal the new VAT rate will be implemented on January 2019.

Stable ringgit and rupiah must not lead traders and businesses to complacency
(14 August 2017) Governments of Indonesia and Malaysia have successfully reduced the ringgit and rupiah’s volatility from their slump in 2016, however, complacency may rise among traders and businesses. Bankers agreed that businesses and traders may expose themselves to potential losses as they reduce their foreign currency hedgings due to the currency stability. The ringgit has stayed between 4.25 and 4.30 per dollar since the end of May, compared with 3.85 to 4.49 last year. The rupiah traded in a range of just 1.3 percent in the second quarter, versus a quarterly average of almost 9 percent since 1991.

Thailand’s surge in currency led to concerns on outlook
(16 August 2017) The Thai baht surged 7.7% against the dollar this year leading to renewed questions about an interest rate cut. The increase may threaten the country’s recent recovery on exports and the Bank of Thailand predicts that there will be an acceleration in inflation during the second half 2017 at 0.8% and 1.6% in 2018. Meanwhile, the central bank forecasts a 3.5% economic expansion this year, making it the fastest pace since 2012. Aside from exports and tourism supporting the economy, the government is planning to speed up infrastructure projects to catalyse investment.

Philippines economy grows faster than 6% for eight quarters
(17 August 2017) The Philippines economy proved its resiliency as it grew faster than 6% for an eighth consecutive quarter. According to the Philippine Statistics Authority, the country’s gross domestic product (GDP) rose 6.5% in the second quarter after expanding 6.4% in the first quarter and the government’s expenditure increased to 7.1%. Meanw hile,consumer spending, which makes up 70%, of the country’s GDP increased by 5.9%. The Philippines is currently one of the world’s fastest growing economies due to its strong domestic demand and President Rodrigo Duterte’s plans to improve infrastructures.

Fitch says outlook stable for Malaysia with ‘A-’ rating
(17 August 2017) Fitch Ratings has affirmed Malaysia’s Long-Term Foreign and Local-Currency Issuer Default Ratings (IDRs) at ‘A-’ with a Stable Outlook. Malaysia is estimated to have an average five-year real GDP growth of 5% as the economy has adjusted to challenges including lower oil prices and volatile capital flows. Malaysia’s central bank forecasts inflation to be at 3.5% in 2017. The government’s debt will also stabilise at approximately 52% of GDP this year as the impact of falling oil prices on the budget deficit are contained. Fitch added that asset quality and capitalisation of banks in the country remains healthy while household debt can be controlled through strong employment and income growth.

Indonesia targets 5.4% growth in GDP for 2018
(8 August 2017) South Korea has been actively investing in ASEAN countries and has become the country’s second largest trading partner since the signing of the Korea-ASEAN free trade agreement 10 years ago. Government and business industry sources reported that South Korea’s export to ASEAN reached US$118.8 billion in 2016 with investments of US$350 million and construction projects of US$8.8 billion. South Korean investments continue to rise in ASEAN as it looks for alternative markets after China took retaliatory action against its deployment of the U.S. Terminal High Altitude Area Defense (THAAD) system.

Commerce ministry to increase online trade through a national e-commerce plan
(17 August 2017) Thailand’s Commerce ministry approved a framework for a five-year national e-commerce plan to increase local online trade by 20% annually to achieve US$150 million by 2021. The framework includes strategies to increase online traders’ competitiveness such as providing a suitable environment for trade and improving quality and efficiency of support factors to build up confidence for both buyers and sellers. Commerce Minister Apiradi Tantraporn said that Thailand has the highest trade value of business to consumer (B2C) e-commerce among ASEAN nations.

Minister urges local palm oil players to increase exports to Asia Pacific region
(17 August 2017) Malaysia’s Plantation Industries and Commodities Minister Datuk Seri Mah Siew Kong urged local palm oil players to export products to the Asia-Pacific region. Malaysian palm oil exports to the region make up the majority of the market at 65%. Currently, Philippines, Vietnam and Myanmar are major importers as they account for 57% of Malaysia’s total exports to ASEAN. Malaysia aims to reach 350,000 tonnes of exports to the Asia-Pacific region which will lead to an additional 692,000 tonnes by 2020.

Vietnam shows more resilience compared to Cambodia
(17 August 2017) Vietnam shows greater resilience compared to Cambodia due to its diversified economy in areas of electronics, garments, textiles and others. Vietnam’s export product mix and the markets it exports to are more diverse than that of Cambodia. Additionally, Vietnam’s free trade agreements (FTAs), good infrastructure networks, and high foreign direct investments (FDI), and low cost higher skilled labour make it more attractive than Cambodia. According to World Economic Forum Global Competitive Index, Vietnam’s ranking rose from 70th in 2013-2014 to 60th out of 138 countries in 2016-2017.

Thailand encourages local companies to invest in ASEAN
(17 August 2017) Thailand’s Board of Investment (BoI) is encouraging Thai companies to invest in ASEAN countries especially in Cambodia, Laos, Myanmar and Vietnam. According to BoI Secretary-General Hiranya Suchinai, the ASEAN region can reduce cost of production by having production bases in the region and increase market access to other regional markets via lower tariffs through ASEAN trade ties with other global trade blocs. BoI statistics indicate that Thai investments abroad has totalled up to US$13.3 billion and firms have been investing in various industries including retail outlets, banking and food processing.