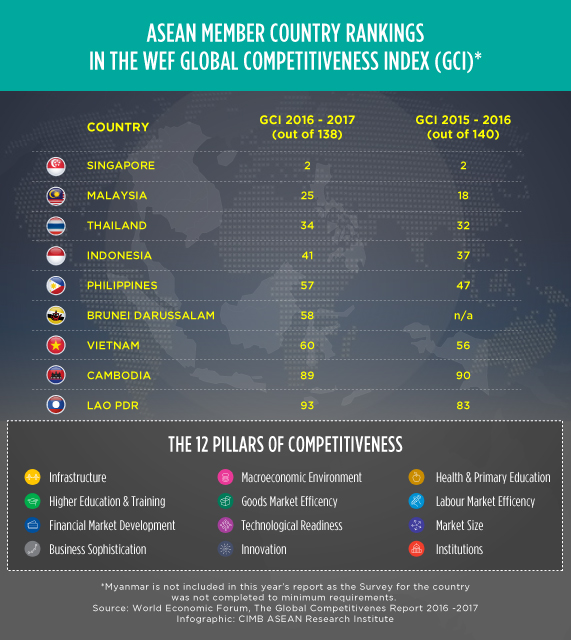 Indonesia and Vietnam rise up in WEF competitiveness index
(27 September 2017) Indonesia moved to a rank of 36 overall, up from 41 last year on the World Economic Forum’s Global Competitiveness Index. The country saw an improvement in 10 out of 12 categories, including health, primary education and infrastructure. Meanwhile, Vietnam also leapt up five spots ranking at 55, and up 20 places from five years ago. The country made significant improvements in technological readiness and labour market efficiency.

Malaysia ranks among best in ASEAN for efficiency in government spending
(27 September 2017) Malaysia has been ranked second out of nine ASEAN countries for its efficiency in government spending in the World Economic Forum (WEF) Global Competitiveness Report 2017-2018. Meanwhile, in overall rankings Malaysia was placed at 15 out of 137 countries with Brunei Darussalam, Cambodia, Indonesia, the Philippines, Laos, Singapore, Thailand, Vietnam ranked 58, 89, 41, 57, 93, 2, 34, 60 respectively. The study used 70% of data from a survey from the United Nations and 30% data from 137 countries, and tracked the performance of 137 countries on 12 pillars of competitiveness.

Philippines officials seek private investment from Japan
(26 September 2017) The Philippines government sought to attract Japanese companies to invest more in the country at an event held at the country’s Tokyo embassy with Bangko Sentral ng Pilipinas Governor Nestor Espenilla Jr.,Secretary of Finance Carlos Dominguez and Ernesto Pernia, the secretary of socioeconomic planning at the National Economic and Development Authority, seeking to allay fears of investors. Espenilla described the peso, which had reached an 11-year low against the dollar in mid-August, as being “in line with economic fundamentals.” While Pernia, emphasised on the administration’s commitment to tackling the problem of corruption saying that President Duterte has “zero tolerance on crime and corruption.”

Singapore inflation muted ahead of monetary policy statement
(25 September 2017) Singapore’s inflation slowed in August as the cost of private road transport and food prices grew at a slower pace. Data released by the Department of Statistics showed the consumer price index rose 0.4% in August from a year ago, slowing from July’s increase of 0.6% and coming in below the forecasts of most economists. This has led many to believe that the Monetary Authority of Singapore will likely stand pat on monetary policy in October.

Vietnam to improve ease of doing business for SMEs
(26 September 2017) Vietnam’s Ministry of Industry and Trade plans to halve the 1,200 conditions currently imposed on business and investment. The effort is aimed at simplifing the administrative process, especially for private, small and medium enterprises as Vietnam has been lagging behind its Southeast Asian peers in the World Bank’s Doing Business index. A survey released by the Vietnam Private Sector Forum showed that 44% of enterprises said they had missed market opportunities because of legal barriers and restrictions.

Cambodia seeks GSP status for its products
(5 October 2017) Representatives from Cambodian trade unions and employers associations will put forward a request to the European Union and the United States to extend the Generalised System of Preferences for a number of Cambodian products. A joint statement was released after a closed-door meeting of the Labour Advisory Committee on Minimum Wage for 2018. President of the Cambodia Labor Union Federation Som Aun said that since the minimum wage has been revised upwards several times in the last 10 years, there is now a need to make Cambodian products more competitive by increasing preferential treatment.

Indonesia to see first e-commerce IPO in October
(28 September 2017) The first Indonesian e-commerce startup,PT Kioson Komersial Indonesia, will go public on 3 October. The company connects some 19,000 merchants in 300 cities with consumers. Kioson acts as a sort of middle-man that helps mom-and-pop stores and roadside kiosks sell everything from mobile phone credit to airline tickets through its tablets which are pre-loaded with its shopping app. These stores become the physical storefronts for digital sellers featured on Kioson’s site while buyers browse in person and place orders before handing cash over to the vendors, who then acquire the desired items through Kioson’s app, pocketing a small fee. President and Director of Kioson Jasin Halim said that, “The market and the regulator will be watching us closely. We’re the test subject in a way. We see ourselves as a bridge between e-commerce and the many people still barred from it because of difficulties in using cash for online purchases.”

Thailand rushes to implement infrastructure plan before 2018 electionss
(28 September 2017) Thailand’s military government is looking to start construction of projects under a 1.5 trillion baht (US$45 billion) investment plan before possible elections in 2018. According to the the secretary-general of the office overseeing the plan Kanit Sangsubhan the Eastern Economic Corridor initiative should be in place by the end of 2017 to bolster investor confidence, and construction of some of the planned infrastructure may begin in 2018. He added that, “We’re in a rush, we want to make sure everything is ready by the time the new government comes in.”

Companies ink first power trading agreement under Asean Power Grid initiative
(27 September 2017) Malaysian Energy, Green Technology and Water Minister Maximus Ongkili said Malaysia will be able to purchase up to 100MW of hydropower from Laos starting next year, thanks to the signing of the Energy Purchase of Wheeling Agreement between Malaysia, Laos and Thailand. He added that the multilateral cross-border power trading agreement is the first in ASEAN implemented under the Asean Power Grid (APG) initiative, which is a flagship project under the Asean Plan of Action for Energy Cooperation (APAEC) 2016-2025. The agreement was inked by the representatives of the power companies involved namely, Tenaga Nasional Bhd (TNB), Electricite du Laos (EDL) and Electricity Generating Authority of Thailand (EGAT).

Indonesian Finance Minister warns of default risk for national utility company
(27 September 2017) Indonesian Finance Minister Sri Mulyani Indrawati laid out her concerns about state-owned utility company PLN in letter to Energy and Mineral Resources Minister Ignasius Jonan and State-owned Enterprises Minister Rini Soemarno, which was later leaked to media. She warned that the financial performance of PLN continues to decline as the growth of electricity sales is not in line with the target, and the government’s policy to eliminate increases in electricity tariffs could potentially increase the risk of default at PLN. Later, in a media release, the Finance Ministry said it regrets the leak but is “obliged to manage the state budget prudently and sustainably, including monitoring and assessing fiscal risks from various public activities.”