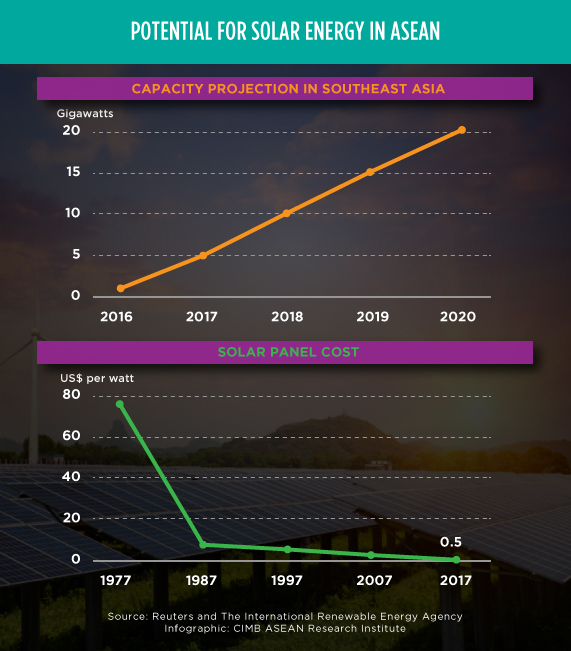 Cambodia keen to invite companies to set up solar energy projects
(29 November 2017) Cambodian Secretary of State for the Ministry of Mines and Energy Ith Praing said a host of companies had shown interest in starting green energy projects in the country and been granted permission to do feasibility studies for solar power plants. However a lack of options to sell excess energy to the national grid is keeping many projects from materialising and that the ministry is working on studying how to connect projects to the national grid. Cambodia’s total energy consumption stands at 2,000 megawatts per year, 60 percent of which is generated from the country’s six hydropower dams, while 20 percent is imported from its neighbour, and the remaining comes from biomass and coal-fired plants.

US$300 million loan for Philippine infrastructure funding
(28 November 2017) The Asian Development Bank (ADB) has approved a US $300 million loan and technical assistance grant for the Philippines government to develop the domestic capital market for infrastructure financing. The Philippine Development Plan calls for public spending on infrastructure to increase to 7.4 percent of gross domestic product by 2022 from the current level of 5.1 percent. The principal financial sector specialist at ADB’s Southeast Asia Department said that the government’s recent initiatives to improve the capital markets are encouraging and well timed.

Indonesia launches tax amnesty sequel
(27 November 2017) A looming revenue shortfall is pushing the Indonesian government to give taxpayers another chance to voluntarily report previously hidden assets. The tax office said that any individual and corporate taxpayers will only have to pay the upper limit of standard income tax at 30% and 25% respectively if they voluntarily report their assets before the tax investigators find them. Head of Investigating Planning Indonesia at the tax office Tunjung said that they had collected data on 786,000 potential taxpayers who did not participate in the earlier tax amnesty.

Thailand to charge entry fee for foreign vehicles in 2018
(29 November 2017) The Thai government plans to charge an entry fee for foreign vehicles starting at the end of 2018. The reason given for this was that there are an increasing number of foreign vehicles to entering Thailand through border checkpoints and the funds are required for repair and maintenance of roads. Deputy Chief of the Thai Office of Transport and Traffic Policy and Planning Wilairat Sirisophonsin said that the the study on collecting toll from foreign vehicles will be completed next month and will take a year to gain approval and be implemented. The government spends an average 15 billion baht (US$ 0.46 billion) annually for these repairs.

Malaysia to consider becoming a member of Budapest Convention
(29 November 2017) Malaysia is keen to explore the possibility of becoming a member to the Budapest Convention on Cybercrime. Malaysian Minister in charge of Legal Affairs Datuk Seri Azalina Othman said that the government has formed several committees within various government departments including law enforcement agencies to study the provisions in the convention and determine the policy, legal, technical and administrative requirements that Malaysia needs to fulfill in order to be a member. Drawn up by the Council of Europe in Strasbourg, France in 2001, Budapest Convention aimed at providing for domestic criminal procedural law powers.

Vietnam holds IPOs to liberalise power sector
(28 November 2017) In the hopes of easing electricity shortages and to attract more foreign investment and robust the economic growth, Vietnam has embarked on the process of liberalising its power sector and power firms are opting for. Over the 2017-2021 period, Vietnam is forecast to suffer an electricity shortage as the installed capacity growth is estimated to range from 4.6 to 10 percent per annum lower than the the projected 10 to 11 percent annual growth in electricity consumption. The Government plans to reduce its holdings in power companies to 51 per cent. The remaining stakes will be offered to strategic investors and put up on public sale. It is hoped the IPOs will generate much-needed capital and expertise for the government.

Malaysian company close to controlling 30% of global rubber market
(27 November 2017) Malaysian rubber manufacturer, Top Glove moves a step closer to achieving its mission of controlling 30% of the global rubber market. The company is in negotiations to acquire one its rivals, Aspion. The estimated of the acquisition is RM1.2 billion (US$292 million). Talking to the the reporters in one interview session, the Top Glove’s Executive Director, Mr Lim Cheong Guan said that “We need this breakthrough to put us in a stronger position’. Buying Aspion would increase Top Glove’s rubber market share by 3% bringing the company’s total market share to 28%.

China invests heavily in Laos power projects
(27 November 2017) According to the Lao government’s figures, by the end of 2016 Chinese companies had signed up for US$6.7 billion worth of construction projects in the country – some 30.1 per cent of the total earmarked for Laos’ infrastructure upgrade.Earlier this year, China and Laos jointly initiated work on the second phase of the 1,156-megawatt Nam Ou Cascade Hydropower Project. This project is set on Laos’ principal river and is seen as one of the country’s key contributions to China’s Belt and Road Initiative. Dr Khammany Inthilath, Laos’ Minister of Energy and Mines mentioned that the project will have a major role to play in the reduction of poverty across Laos once it is completed. China shoulders the bulks of the US$2.8 billion initiative in exchange for the concession to operate the hydropower installation for the next 29 years.

Vietnam commits to continuous digital innovation
(28 November 2017) At the Vietnam Internet Forum 2017, Deputy Minister of Information and Communications Phạm Hồng Hải said that government agencies, businesses and organisations are constantly innovating and experimenting with the latest technologies, making every effort to keep themselves up-to-date, and exploring different solutions including e-government, digital economy or online consumption. Hải also warned that besides the tremendous benefits, the world was increasingly concerned about the downside of greater connectivity, like information security breaches, as well as harmful cultural and social impacts.Vietnam has a higher than world average internet connectivity with 50 million users, or 54 per cent of the population.