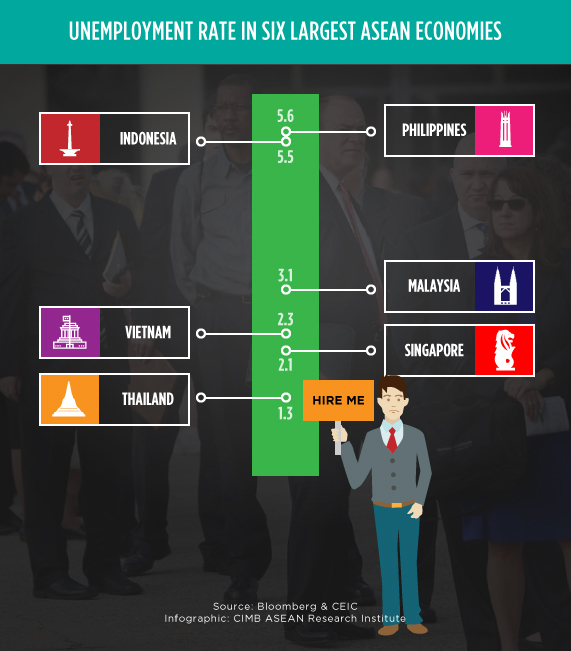 Bank of Thailand focus on big data to better understand unemployment rate
(6 December 2017) Thailand has one of the lowest unemployment rates in the world, ranging between 1.2 percent and 1.3 percent this year. To better understand this low rate of unemployment the Bank of Thailand is developing its own employment index based on data from online job-search portals to enable them to pick up identify significant trends in employment. Jaturong Jantarangs, an assistant governor at the Bank of Thailand said, “We want to do evidence-based policy so big data is useful”. He added that this evidence-based policymaking will not only benefit monetary policy but also fiscal policy.

Zeti: ASEAN has enhanced financial and bond markets
(6 December 2017) At the opening of the Federation of Asean Economic Association (FAEA), the former Governor of Bank Negara Malaysia Tan Sri Dr Zeti Akhtar Aziz said that ASEAN has developed better financial and bond markets, enhanced regulation and supervisory oversight and strengthened financial surveillance capabilities. “This has reinforced financial reforms that resulted in greater market orientation and more competitive financial systems. These trends have been supported by buffers created during regional cooperation and collaboration,” she said.

Indonesia exports US$1 billion of timber to EU after implementing new certification
(4 December 2017) Since Indonesia implemented its Legality Verification System certificate (SLVK) it has exported over US$1 billion of certified wood and timber products to the European Union (EU). The certification is in accordance with EU’s Forest Law enforcement, Governance and Trade action plan. Earlier this year, Indonesian President, Joko Widodo mentioned that he expects Indonesian furniture exports to have tripled from US$1.5 billion to US$5 billion by 2021. The acceptance of the SLVK should also work as a good reference to access other markets that enforce high standards for sustainable timber such as Australia, Japan and the United States market.

New car sales in Southeast Asia grows 3%
(6 December 2017) Double-digit growth in car sales in the Philippines and Thailand has compensated for declines in Malaysia and Vietnam, with car sales in six major Southeast Asian countries growing 3 percent in October 2017. The Philippines had the sharpest growth of 18 percent exceeding 40,000 vehicles. Meanwhile, sales in Indonesia rose two percent after declining the month before. Except for June and September, Southeast Asia’s monthly new car sales have outperformed last year’s. Overall unit sales through October exceeded 90 percent at just over 2.73 million units exceeding the same period in the peak year of 2013.

Vietnam to eliminate tariffs on auto parts in 2018
(5 December 2017) The Vietnamese government plans to eliminate tariffs on key autoparts from January 2018 onwards. The move follows the planned termination of tariffs on cars within the region, as the ASEAN Economic Community becomes fully effective in the same month. Automakers in Vietnam will be free from a 10-30% duty on imported parts if they meet certain conditions in terms of emissions, the number of cars produced, and the ratio of local procurement of parts.

Indonesia focus on oil and gas holding company
(5 December 2017) The government will soon establish a state-owned oil and gas holding company led by state-owned energy firm Pertamina. Fajar Harry the Head of the State-Owned Enterprises Ministry’s Mining Business, Strategic Industry and Media Affairs said that one of the steps towards creating the holding company is to push state-owned gas distributor PT Perusahaan Gas Negara (PGN) to hold an extraordinary shareholders meeting. An official from PGN said that his company respected the move which would see the government step in as a major shareholder.

Malaysia’s total trade surges in October 2017
(6 December 2017) October marked an annualised 18.8 percent rise in exports exceeding the RM80 billion (US$19.6 billion) for the third time this year. In the first 10 months of 2017, the total trade amounted to RM 1.465 trillion (US$0.36 trillion), growing by 21.5 percent over the same period in 2016. The Malaysian Ministry of International Trade and Industry (MITI) said that the expansion was mainly due to higher exports of electrical and electronic (E&E) and petroleum products. Additionally, all the major sectors in the economy recorded a positive export growth with most of them recording double-digit export growth.

Tourist arrivals to Bali drop 16% in October, affect economy
(5 December 201) Prior to the eruption of Mount Agung in November, international tourists decreased 16% in October to 460,000, according to government statistics. Cancellations for flights and hotel rooms surged as volcanic earthquakes increased. The overall occupancy rate at the island’s hotels fell 6.7 percentage points to 65.9% in October.The National Agency for Disaster Management estimates economic damage from late September through right before the eruptions at 20 trillion rupiah (US$1.45 billion). However, Bali marked saw a 25 percent increase in tourist arrivals in the first nine months of 2017.

Singapore to push for greater economic integration within ASEAN
(5 December 2017) The Singaporean Minister of Finance Singapore Heng Swee Keat said that the government will push for greater economic integration within the regional grouping when Singapore takes over as chair. There is scope for ASEAN to work with other partners such Japan, South Korea, India and, China and with its Belt and Road Initiative. Mr. Heng added that despite the rise in the anti-globalisation sentiment in the United States, ASEAN still believes in globalisation.

Singapore’s ageing population double that of its young population by 2030
(6 December 2017) According to research done by an economist at United Overseas Bank Ltd. in Singapore, Francis Tan, next year will mark an ominous turning point for Singapore’s greying population. In 2018, the share of the population that’s 65 years and older will match those younger than 15 for the first time. At this rate, seniors in Singapore’s population will make up more than double the share of the youngest residents in 2030. This may result in changes to taxes, immigration rules, and social services. Tan sees the government increasing the GST next year to 8 percent from 7 percent which a similar boost expected in 2019.