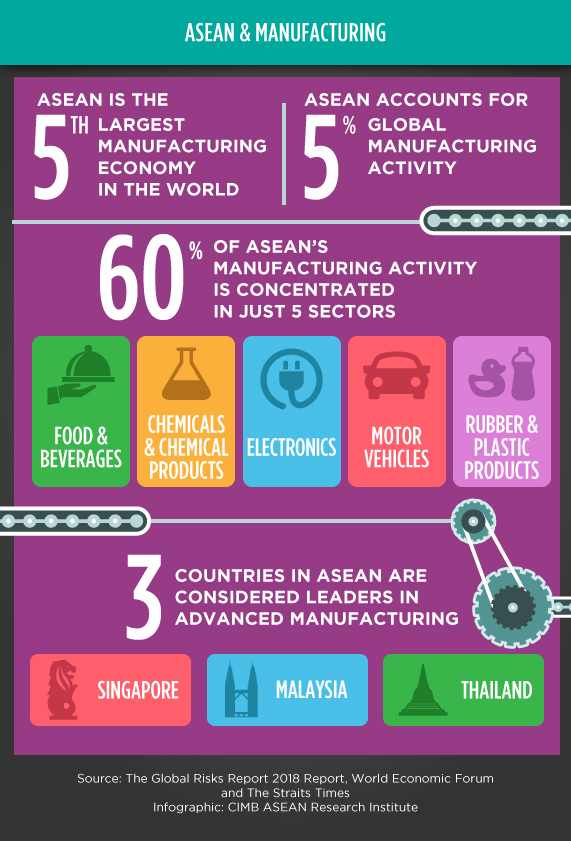 Singapore poised to benefit from fourth industrial revolution
(13 January 2018) According to a new report from the World Economic Forum, Singapore is among the 25 countries best positioned to benefit from the rise of advanced manufacturing and smart factories. The report noted that Singapore’s manufacturing capabilities “have evolved considerably, with strong competencies today in high-value areas of manufacturing such as research and development and product design”. Last November, the Singapore Economic Development Board launched a set of guidelines called the Singapore Smart Industry Readiness Index, to help manufacturers build smart factories of the future.

Cambodian government aims to reduce foreign debt
(16 January 2018) A representative from the Ministry of Economy and Finance said that the government plans to reduce its foreign debt and raise capital through the issuance of bonds. Decreasing foreign debt will help balance the expenditure budget, improving the country’s current account. Chan Sophal, Director of the Centre for Policy Studies, said that the government’s new strategy to reduce foreign borrowing while strengthening local borrowing will help increase the public revenue of the country.

Indonesia happy to welcome more investment from foreign banks
(15 January 2018) According to the head of the Indonesia’s Financial Services Authority, the government in Jakarta wants to see investments, similar to that of Mitsubishi UFJ Financial Group Inc’s purchase of a stake in PT Bank Danamon Indonesia, as it seeks to boost lending and fund ambitious infrastructure projects. Wimboh Santoso Chairman of the regulator Otoritas Jasa Keuangan (OJK) said that lenders from India and South Korea are also keen to invest in Indonesia and that many international banks are intending to come to Indonesia as the country has a big market, a large population and is rich in natural resources. The Indonesian government has been facing a revenue shortfall and rising debt as President Joko Widodo seeks to fund hundreds of billions of dollars of infrastructure projects.

Large banks begin fundraising through debt
(15 January 2017) Large banks have raised local and foreign currency debentures to lock in cheap costs and increase liquidity in anticipation of higher loan demand.The Bank of Thailand expects the country’s GDP to grow by 3.9 percent in 2018, with merchandise shipments rising 4 percent. Kasikornbank (KBank) president Predee Daochai said the bank prepared a dollar-denominated reserve to respond to customer demand for foreign currency loans. Last year, Siam Commercial Bank allocated US$900 million in debentures, US$400 million of which was for senior unsecured notes with a maturity of five years issued in January.

Myanmar and Laos sign deals on sectoral partnership
(16 January 2018) Myanmar and Laos have reached three memorandums of understanding on bilateral cooperation in three sectors on related to electric power, science and technology, and anti-corruption. The signing of the MOU’s was witnessed by Myanmar State Counselor, Aung San Suu Kyi and visiting Lao Prime Minister, Thongloun Sisoulith. The last Lao leader to visit Myanmar was President Bounnhang Vorachitch in August 2016.

Singapore unveils plan to dominate maritime industry
(13 January 2018) Singapore unveiled its ambitious plans to be a maritime industry world leader. The Sea Transport Industry Transformation Map (ITM) has an overarching vision to make Singapore a global maritime hub for connectivity, innovation and talent. This means expanding the sector’s value-add by S$4.5 billion (US$3.4 billion) and creating over 5,000 good jobs by 2025. The container throughput rose 8.9 per cent to 33.7 million containers in 2017, while the maritime industry as a whole employed more than 170,000 people and contributed 7 percent to the economy.

MIDA Frankfurt says Malaysia seen as a hub for business within the region
(15 January 2018) Yusni Hasnan Chu, Director of the Malaysian Investment Development Authority (MIDA) in Frankfurt said that they will be pitching Malaysia as a business hub as the country has all the attributes of a strategic manufacturing hub with a fine distribution network in the region. He said that MIDA is seeking to get foreign investors to invest in green technology which is evolving as a major sector in Malaysia. Other targeted areas of interest for investment in Malaysia are the 4.0 smart manufacturing and sectors such as aerospace, medical devices, electrical and electronics and machinery. The MIDA Frankfurt office exceeded the target of RM2.5 billion (US$ 630 million) set for the Frankfurt office for 2017 and reached RM4.8 billion (US$1.22 billion) for the year.

Thailand looks to break into the top 20 in World Bank ranking
(16 January 2018) Minister from the Prime Minister’s Office Kobsak Pootrakool says that Thailand could break into the top 20 in the World Bank’s Ease of Doing Business ranking for 2019 after it managed to jump to 26th-most business-friendly nation in the 2018 ranking. Tossaporn Sirisamphan, Secretary- General of the Office of The Public Sector Development Commission said that the country will improve its World Bank ranking by reforming its digital laws but he remained cautious because the number of users of existing digital platforms is is still low.

CSX calls local companies to issue bonds
(15 January 2018) Local companies were recently asked to get in touch with the Cambodia Securities Exchange (CSX) if they are interested in issuing bonds. Mr Soleil Lamun, Director of CSX market operations department, said with the announcement they hope to get the ball rolling and attract the first companies interesting in issuing bonds. In December, the Securities and Exchange Commission of Cambodia approved the rules that will regulate the local bond market, together with three new financial tools that aim to boost trading on the local bourse.

High-speed rail contract tests Malaysia-Singapore ties
(15 January 2018) As a deadline to award the multi-billion dollar project nears, the leaders of Malaysia and Singapore are expected to discuss plans for a high-speed rail project linking their countries. The high-speed rail valued at US$17 billion is the biggest joint project undertaken by the Southeast Asian neighbours in recent years. Associate Professor, Ja Ian Chong from Department of Political Science at National University of Singapore said that the preferred bidder could be a source of contention as Singapore has had difficulties recently in its relationships with China.