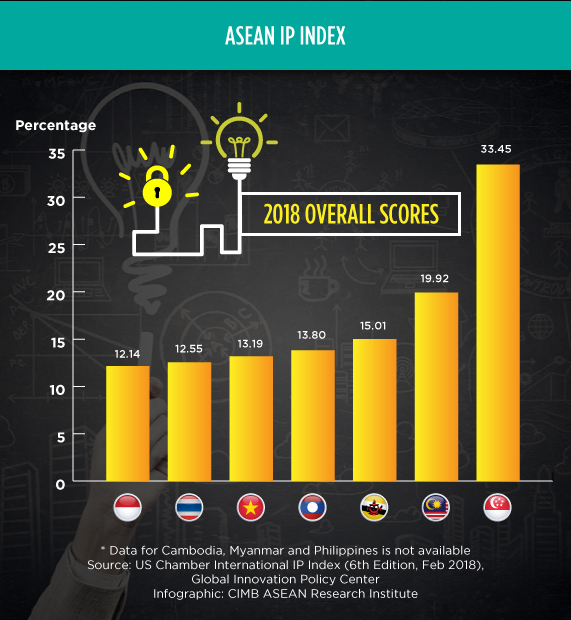 Brunei takes 35th spot in the Global IP index
(10 February 2018) Brunei was ranked 35th in the sixth edition of the International Intellectual Property (IP) Index released by the US Chamber of Commerce Global Innovation Policy Center (GIPC). However, the country’s overall score in the IP rating has decreased from 41 percent in the fifth edition to 38 percent in the sixth edition, indicating weaker performance on the new indicators. To address that, the Sultanate will continue to work on the expansion of high-tech capacity with a focus on knowledge-intensive sectors. Technology and Creative Industry has also been included in the Brunei Economic Development Board as one of the five key areas for national development.

Cambodia to receive development aid from Japan
(13 February 2018) To boost some ongoing key projects in Cambodia, the Japanese government will contribute US$168 million to the Cambodian administration to help improve its socio-economic development and achieve their goal of becoming a middle-income country by 2030. Secretary-General of the Cambodia Rehabilitation and Development Board of the Council for the Development of Cambodia (CDC) Chhieng Yanara described the Japanese government’s aid as timely and demonstrates the commitment of both countries in strengthening their strategic cooperation.

Export restriction increases rubber prices
(12 February 2018) Reduced supply from rubber exporting countries has led to global natural rubber prices rising by 5 percent in January. The International Tripartite Rubber Council (ITRC) with Indonesia, Thailand and Malaysia as members, have implemented the “Agreed Export Tonnage Scheme” (AETS), which reduces the volume of natural export rubber to 350,000 tons from January to March 2018. According to the International Rubber Conference Organization (IRCO), the price of daily composite rubber has increased from US$1.46 on December 21st to US$1.54 on January 31st. In 2012, Indonesia exported 2.44 million tons of rubber worth US$7.86 billion, while in 2017, 2.77 million tons of rubber worth US$4.77 billion were exported.

MoF urged to remove tax for locally manufactured auto parts
(13 February 2018) Ministry of Industry and Trade (MoIT) of Vietnam has asked its Ministry of Finance to remove tax on the special consumption of locally-manufactured auto parts. MoIT urged the finance ministry to exempt import tax on auto parts manufacturers who invest in Vietnam. Instead of the current 30 days, The MoIT also recommended the application of a tax payment guarantee for a period of eight months.

Foreign direct investments in 2017 exceeds BSP’s target
(12 February 2018) Foreign direct investments (FDIs) into Philippines surged to US$8.7 billion during the first 11 months of 2017, exceeding the full-year target of US$8 billion set by the Bangko Sentral ng Pilipinas (BSP). Data from the BSP showed that net FDI coming into the Philippines amounted to US$869 million in November 2017, which is higher by 16.9 percent than the US$744 million worth on investments in November 2016. BSP described the sustained FDI inflows as a reflection of investors confidence, given Philippines’ solid macroeconomic fundamentals and government growth prospects.

Laos to participate in high-speed rail talks
(10 February 2018) Thailand and China will conduct talks with Laos about linking the high-speed train system from Nong Khai, Thailand to Vientiane, Laos. In a meeting in Beijing between the representatives of the Laos Ministry of Transport led by its Transport Minister Arkhom Termpittayapaisith and Chinese counterparts led by Wang Xiaotao, they decided that the Bangkok-Nong Khai high-speed train project should efficiently connect the high-speed network in Laos to the nation’s capital. To further the discussion, China will invite Lao authorities to discuss the connectivity of the high-speed network including matters on immigration and custom procedure for cross border passengers.