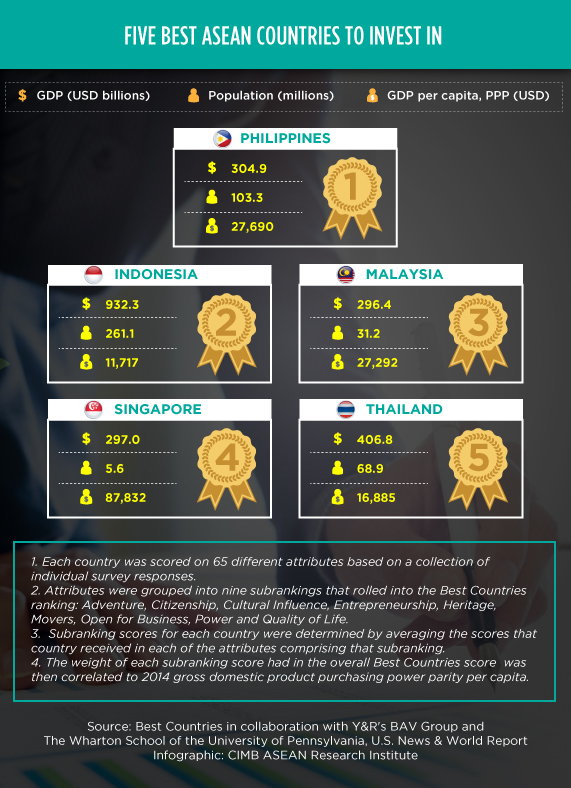 Philippines ranks first among US “Best Countries to Invest In”
(5 March 2018) Based on a report published by Business Insider, Philippines was ranked as number one ahead of the other ASEAN countries for the Best Country to Invest In. The scores were primarily tabulated from more than 6,000 business decision makers on a compilation of eight equally weighted country attributes. Ranked second in the report was Indonesia, followed by Poland, Malaysia and Singapore in the top five. According to United Nations data, the Philippine continued to perform well despite the declining inflows of foreign direct investment (FDI) to Southeast Asia. As of November 2017, the latest data from Bangko Sentral ng Pilipinas showed that net FDI inflows worth US$8.7 billion have exceeded the US$8 billion target for 2017.

Banks compete for digital technology to enhance banking services
(5 March 2018) Banks in Vietnam and Thailand are racing to adopt digital banking technology in order to enhance their services in the age of smart technology. In Vietnam alone, as of November 2017, 67 percent of its total population had internet access. In recent years, the Vietnam Government has encouraged e-payment development to minimize cash payment. While in Thailand, the volume of internet and mobile banking transactions continues to expand as both internet and mobile penetration improve. In 2014, Kasikornbank (KBank) began investing around US$15.3 million (THB 480 million) annually to enhance its digital banking services, while Bank of Ayudhya said that the bank would invest US$640 million (THB 20 billion) on the development on its technology infrastructure and digital banking platform. Siam Commercial Bank on the other hand, has voiced plans to invest in its digital banking capability, with allocations amounting to US$1280 million (THB 40 billion).

Thailand to seek new markets and direct trade negotiations with the United States
(7 March 2018) Thailand will likely see impacts as a producer of intermediate goods that are exported to the US’s key trading partners, such as China. The Thailand Development Research Institute (TDRI) said the country should explore new markets and pursue direct trade negotiations with the United States against the backdrop of heightened fears of a global trade war, as US will impose tariffs of 25 percent on steel imports and 10 percent on aluminium imports to shore up the country’s struggling heavy industries. The Joint Foreign Chambers of Commerce in Thailand said the Thailand should not panic over the global trade measures if the country has strong competitive advantage compared to other nations.

Malaysian exports surge 17.9 percent to US$21.2 billion in January
(5 March 2018) Malaysia’s trade exports in January surged 17.9 percent year-on-year to US$21.2 billion (RM82.86) billion, underpinned by growth in all major sectors and increased trade with its major trading partners. The Malaysia Ministry of International Trade and Industry (MITI) said exports of manufactured goods rose to 20.4 percent, which is equivalent to US$17.49 billion (RM68.34) billion, accounting for 82.5 percent share of the country’s total exports. The main contributors to the increase were exports of electrical and electronic (E&E) products, followed by chemicals and chemical products, iron and steel products, optical and scientific equipment, manufacturers of metal as well as transport equipment. Expansion in the trade with Malaysia’s major trading markets was seen across the board with export growth driven by Asean, Hong Kong SAR, the EU, China, India, Taiwan and South Korea.

Vietnamese opens businesses to foreign investors
(3 March 2018) Vietnamese manufacturers are calling for foreign capital investment and this, according to analyst, may result in the disappearance of Vietnamese brands. The Steering Committee on Enterprise Renovation and Development said rather than worrying about Vietnamese brands, it would be better to think about the gains that Vietnamese businesses will receive when the shares are sold to the foreign investors, in addition to having access to capital and sharing of experience from international groups. Analysts said Vietnam still remains one of the most attractive destination points for foreign investors. Particularly, foreign investors do not just aim for real estate projects, but they are also targeting to invest in industries in which they can exploit more advantages from the Free Trade Agreements (FTAs).

Indonesia to accelerate CEPA talk with EFTA
(2 March 2018) In order to boost investment and trade, the Indonesian government has been advised to accelerate its Comprehensive Economic Partnership Agreement (CEPA) negotiations with the European Free Trade Association (EFTA). Centre for Strategic and International Studies (CSIS) said the deal with EFTA was expected to ease trade barriers for Indonesian products, not only exports going to EFTA member countries but also to countries in the European continent. This move will improve Indonesia’s relationship with the European Union and will eventually lead Indonesia into the European market. In 2017, investment from EFTA member countries increased to 4 percent from 0.5 percent that was accounted in 2014.

Laos government sets the target on agriculture, forestry sectors
(7 March 2018) The agriculture and forestry sectors in Myanmar, which represents 15.75 percent of the country’s GDP will strive to expand at a sustainable level of 2.8 percent in 2018. To attain this target, the Laos Ministry of Agriculture and Forestry will continue to implement projects that gives better attention to commercial production and food security. In addition, more cooperation and assistance would also be required to implement essential measures and policies to fill the country four major plans concerning food security, commercial agriculture promotion, forestry and forest resource management, and rural development for poverty reduction. In 2017, The agriculture, forestry and rural development sector underwent a slow projection due to extreme climate change, damage to irrigation systems, and locust outbreaks.

Malaysia furniture exports experienced an increase of US$2.59 billion in 2017
(8 March 2018) Malaysia rose to become among the top 10 furniture manufacturers in the world with products exported to more than 160 countries. To further develop the industry, Malaysia Prime Minister Datuk Seri Najib Razak has announced US$51.04 million (RM200 million) of export credit facility to local small and medium enterprises (SMEs) and US$260 million (RM1 billion) for credit insurance for companies during Budget 2018. Loan facility amounting to US$25.52 million (RM100 million) with 70 percent government surety will be provided to encourage automation among the local furniture companies, which will boost production for export. In 2017, exports in furniture saw an increase of US$2.59 billion (RM10.14 billion) compared to US$1.93 billion (RM7.58 billion) in 2016.

Indonesia to reopen automotive exports to Vietnam
(1 March 2018) In an effort to reopen Indonesian automotive exports to Vietnam, the Indonesian government is planning to inform Vietnam about a change in the vehicle type approval (VTA) certificate. In March 2018, the new regulations issued by the Vietnamese government forced Indonesia to stop the export of completely built-up (CBU) vehicles to Vietnam . This is due to Indonesian government that does not meet the requirement set by the 2017 ministerial decree on manufacturing, assembly, and import of motor vehicles and motor vehicle warranty and maintenance services; and the 2018 circular on the inspection of imported automobiles for technical safety and environmental protection.Last year, Indonesia exported 38,832 CBU vehicles worth US$718 million to Vietnam.