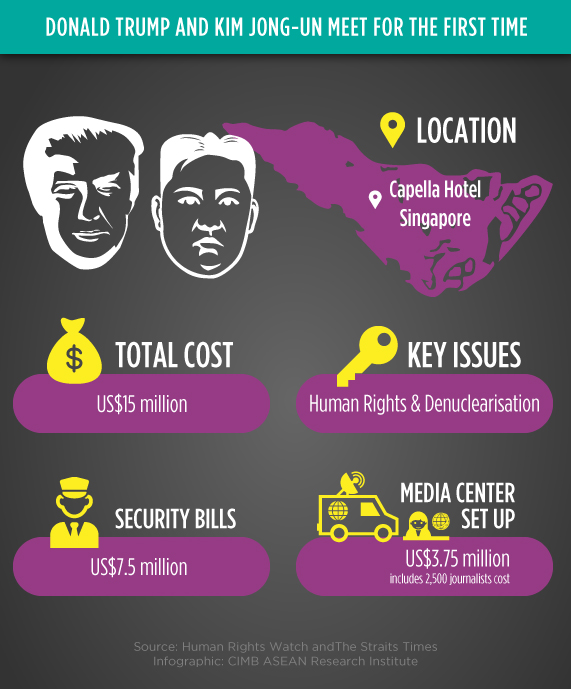 Trump-Kim summit will cost Singapore around US$15 million as the hosting country
(10 June 2018) According to Singapore’s Prime Minister Lee Hsien Loong, the hosting of the historic United States and North Korea summit will cost the country US$15 million (S$20 million) and around half of the amount will be paid for security. The nature of the summit requires stringent security measures, which involves all-around protection and in-depth protection against any attack. Besides, the cost of having 2,500 strong contingents of journalists for the summit also added to the cost, costing the nation US$5 million (S$3.75 million). Lee said the nation was willing to pay the sum for regional stability. President Donald Trump and North Korean leader Kim Jong-un met for the first on 12 June 2018 in Singapore to discuss human rights issues and denuclearisation in the reclusive state. During the summit, both leaders signed a comprehensive agreement and the agreement asserts North Korea’s firm and unwavering commitment to complete denuclearisation of the Korean Peninsula.

Malaysian Prime Minister requests for review on Trans-Pacific Partnership trade agreement
(9 June 2018) Malaysia’s Prime Minister Tun Dr Mahathir Mohamad requested a review on the Trans-Pacific Partnership (TPP) trade agreement, by looking into the level of development in countries involved in the agreement. Dr Mahathir said smaller economies countries such as Malaysia were not gaining much under the current terms. After tough negotiations in early 2018 following the withdrawal from the United States, the Comprehensive and Progressive Agreement for Trans-Pacific Partnership (CPTPP) will lower the tariffs in countries with the sum amounting to over 13 percent of the global economy, a total of US$10 trillion in gross domestic products.

Local tobacco industry looks to penetrate export market
(11 June 2018) The continuous fall of domestic cigarette consumption due to government’s smoking ban and tax reform program has caused the local tobacco industry to move its focus towards the export market. According to the National Tobacco Administration (NTA), a line agency of the Department of Agriculture, lower demand for cigarettes is affecting the production of tobacco leaf. There is an expected dip in production of tobacco leaf by 8.22 million kilograms in 2018 whereas planted areas are expected to reduce by 30 percent in 2018. However, NTA believes there will be a rise in tobacco exports’ volume and value by 5 percent in 2018. Currently, 60 percent of total tobacco production is allocated to the local manufacturing while 40 percent is for the export market.

European Union wary of investment in Myanmar due to Rakhine crisis
(11 June 2018) European Union (EU) nations are cautious when making investment decisions involving Myanmar due to the ongoing Rakhine crisis that has caused instability at the country’s borders. According to the EU-ASEAN Business Council, although Myanmar remains as the main trade partner to the EU, Myanmar must encourage trade and investment by improving tax structure, customs procedure, and payment infrastructure, Among the 300 EU firms which have invested a sum of about US$6.6 billion in Myanmar, nearly US$2.2 billion was injected into the economy in 2017. Bilateral trade between Myanmar and EU was worth US$500 million in 2017 and garments were Myanmar’s largest export to the EU.

Thailand’s budget for welfare plan to be reduced by 13 percent
(9 June 2018) Thai government’s welfare and subsidy plan for low-income people is expected to fall by 13 percent to US$1.25 billion in 2019 when the increased monthly living allowance paid to career training programme participants is discontinued. From October 2017 to May 2018, US$841 million (27 billion baht) of the budget was spent. Receivers with US$934 to US$3115 (30,000 to 100,000 baht) of yearly income will receive additional US$3.11 (100 baht) per month whereas receivers with annual income below 30,000 baht will get extra US$ 6.22 (200 baht) every month once people participate in the programme. From a total of 11.4 million of welfare and subsidy plan receivers, 6.4 million are registered to participate in the programme, where 3.1 million were receivers from annual income below the poverty line. Presently, the government is spending a total of around US$128 million a month to finance the welfare scheme.