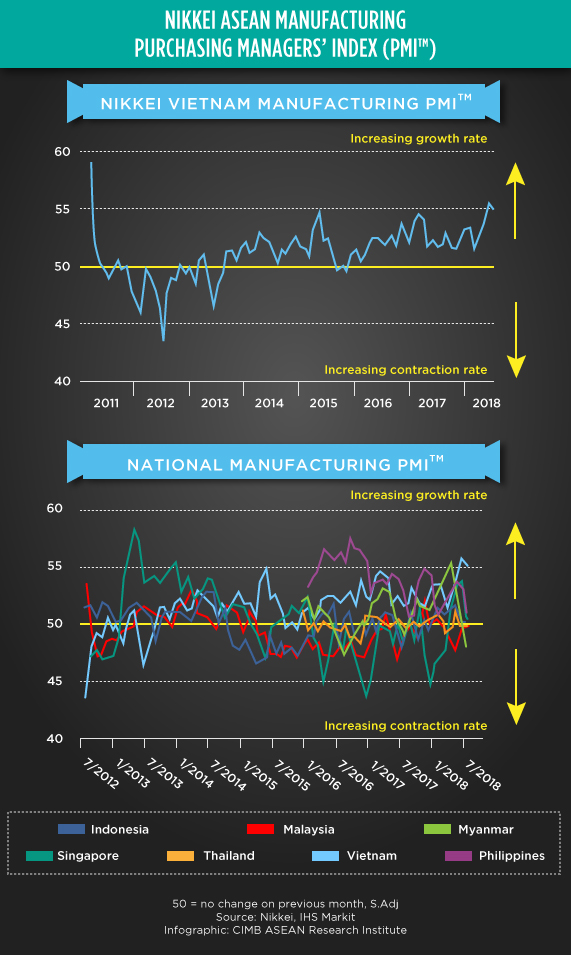 Vietnam Manufacturing Purchasing Index hits one of the highest records since 2011
(1 August 2018) A study by Nikkei showed that Vietnam had achieved one of the highest Manufacturing Purchasing Managers’ Indexes or PMI since 2011 amid a slight fall from 55.7 to 54.9 in July. Vietnam maintained its lead in the ASEAN manufacturing PMI rankings, registering another substantial improvement in its goods-producing sector in July. The Philippines moved up to the second place, followed by Indonesia and Singapore. The survey indicates a rebound in the growth of new export orders, which leads to higher staffing levels and increased purchasing activity. The level of confidence in the sector can be seen by firms building inventory reserves to respond better and quicker to new orders from consumers.

Malaysia seeks to protect the interest of national carmakers
(31 July 2018) The Pakatan Harapan government led by Malaysian Prime Minister Tun Dr Mahathir Mohamad might resort to protectionist measures on foreign car imports to protect its own automotive industries. National carmaker Perusahaan Otomobil Nasional, or better known as Proton, suffered a significant drop in its domestic market share to around 14 percent in 2017 due to lower-standard cars, limited after-sale services and stiff competition from foreign automakers such as Honda Motor Co, Toyota Motor Corp and Nissan Motor Co. In 1994, Proton was in its glory days with 74 percent domestic market share. Perusahaan Otomobil Kedua Sendirian Berhad (Perodua) was the local market leader in 2017, with a market share of 40 percent.

ASEAN must press on economic integration and innovation- Singapore’s Prime Minister
(2 August 2018) Singaporean Prime Minister Lee Hsien Loong expressed his support to narrow the development divide and to accelerate economic integration in ASEAN at the opening ceremony of the 51st ASEAN Foreign Ministers’ Meeting on Thursday. He addressed two areas where the region can prioritise – economic integration and technology adoption. Amid the ongoing trade disputes between major economies, he urged all ASEAN member states to reaffirm the centrality of the rules-based, non-discriminatory multilateral trading system and to enable technology and innovation to deepen the bloc’s web cooperation. Three initiative for ASEAN Integration (IAI) centres in Vietnam, Cambodia and Laos will be enhanced to Singapore Cooperation Centres (SCC), which will have a bigger range of technical aid and latest modalities for capacity building.

Japanese and South Koreans will be granted visa-free travel to Myanmar from October 1 onwards
(1 August 2018) Japan and South Korea visitors with valid travel documents will soon be able to make official and social visits to Myanmar without requiring a visa starting on 1 October 2018 for a one-year trial. However, travellers from mainland China, Hong Kong and Macau will still have to pay US$50 for visas upon arrival. Despite the fee, Myanmar’s government will simplify visa requirements for Chinese tourists to attract more visitors from Asia, which accounted for 70 percent of total visitors to the country. In 2017, the number of Japanese visitors to Myanmar increased by 0.7 percent year-on-year to a total of 101,500. Following the visa relaxation, the government projected a 50 percent growth of Japanese visitors to Myanmar

Cambodia’s construction industry attracts US$2.15 billion investment in the first half of 2018
(26 July 2018) The improving construction industry in Cambodia has attracted US$2.15 billion investment in the first half of 2018. China, South Korea and Japan are among the most prominent investors in Cambodia’s construction and real estate industry. An official from the Ministry of Land Management, Urban Planning and Construction attributed the high level of investments in Cambodia to the political stability, favourable law and incentive policy to the investors. From January till June this year, the ministry had issued 1,643 licenses to the construction projects. The construction industry contributed about 29 percent of the country’s GDP, followed by agriculture and tourism for 25 percent and 13 percent respectively. The garment sector is the main contributor to Cambodia’s economy, accounting for more than 30 percent of the GDP.

Consumer Confidence Index in Thailand hits the highest level in 62 months
(3 August 2018) Thai’s consumer confidence index peaked at 82.2 in July, climbed from 81.3 in June and 80.1 in May, representing the highest rate for the past five years and two months since June 2013 according to the latest study by the University of Thai Chamber Commerce (UTTC). The increase in consumer confidence in areas such as the economy, job opportunities and future income signalled a higher purchasing power in the country. According to the director of the Economic and Business Forecast Centre of UTTC, the centre projected the growth of the country’s GDP to reach 4.5-5.0 percent in 2018 due to the strong performance of export and tourism industries. If the government expedites budgetary spending and push for investments in the Eastern Economic Corridor (EEC) infrastructure projects, Thailand’s GDP growth rate could reach 5-7 percent.

House Committee on Ways and Means gives the green light for the Tax Reform for Acceleration and Inclusion (TRAIN-2)
(2 August 2018) The second package of the Tax Reform for Acceleration and Inclusion (TRAIN-2) which aims to lower corporate income tax from 30 percent to 25 percent has been approved by the Philippines’ House Committee on Ways and Means on 2 August 2018. Senate President, Vicente Sotto III filed the bill for the second tranche of tax reform to remove the tax benefits on industries which are underperforming or not part of the government’s strategic investment priorities plan. Rationalized incentives will be used to offset the lower corporate income taxes. However, according to an independent research, while the proposed tax reforms may be fiscally prudent, it will make the Philippines less competitive compared to its regional peers and slow down investment growth as the proposed conditional corporate tax reduction and repealing of fiscal incentives create uncertainties for business.

Indonesia to open bidding for the development of new oil and gas blocks
(31 July 2018) Indonesia will open bidding for three onstream blocks in Makassar Strait, Selat Panjang and South Jambi B in the first week of August. The current contracts for Makasar and South Jambi B are set to expire in 2020 while Selat Panjang will expire in 2021. American multinational energy company, Chevron Corporation is currently operating the Makassar Strait Block but does not intend to extend its contract as it found the block to be uneconomical if it was part of the Indonesia Deepwater Development (IDD) mega gas project. PetroChina, a Chinese oil and gas state-owned firm had decided to withdraw from the South Jambi B block. For Selat Panjang, its existing operator Petroselat Ltd had filed for bankruptcy.

ASEAN benefits from ties with China, says AMRO report
(2 August 2018) ASEAN+3 Macroeconomic Research Office (AMRO) reported that China’s economic ties with ASEAN had benefited ASEAN through various channels such as goods and services trade, investments and financial markets. In its report, ASEAN’s exports to China has risen to more than 12 percent in 2016 compared to just 2 percent in 1990. Exports to China accounted 18 percent of Vietnam’s GDP, 17 percent of Malaysia’s GDP, 9 percent for both Singapore and Lao. ASEAN’s imports from China also increased due to growing demand and expansion of regional production networks. Chinese banks have been a vital funding hub to ASEAN economies especially through the Belt and Road Initiative (BRI).