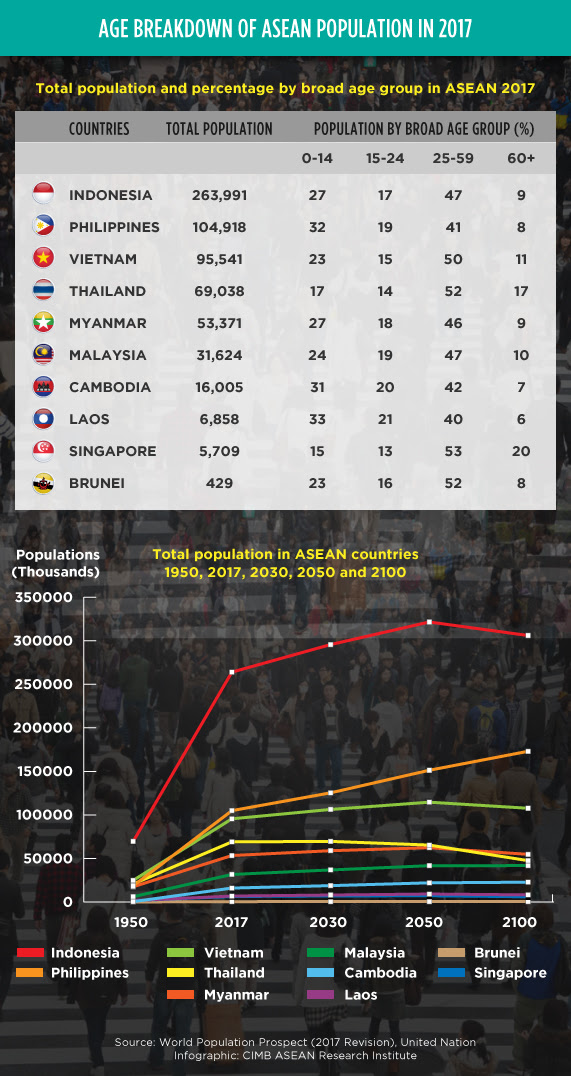 Thailand’s ageing demographics: A threat to its economy
(16 August 2018) As Thailand population ages, the Bank of Thailand projects that this trend will shave 1.5 percentage points of its annual GDP growth rate over the next 10 years. The central bank predicts that Thailand will become an aged society in a decade, a faster pace compared with other developing countries. By then, Thais who are over 65 will make up 14 per cent of the population. The demographic shift will shrink the labour growth rate from 5 per cent to 3.5 per cent, which may lead to a shortage of labour, constraining future economic expansion. Among the ASEAN nations, Singapore has the highest 60+ population at 20 per cent, followed by Thailand (17 per cent), Vietnam (11 per cent), Malaysia (10 per cent), Indonesia and Myanmar (9 per cent each).

Philippines inflation spurs highest interest rate hike in a decade
(10 August 2018) The Philippines central bank hiked interest rates by 50 basis points, its highest margin in 10 years, effectively raising its overnight purchase rate to 4.0 per cent. This surprise move came even as the government announced the economy expanded by 6.0 per cent in April-June, well below the 6.5 per cent of its 10 consecutive quarters. The Monetary Board blamed the lower-than-expected GDP figures on policy decisions, including the temporary closure of Boracay Island, which generates US$1 billion to the government per year. Central bank governor, Nestor Espenilla deemed stronger monetary action to be necessary to rein in inflation, which in July, shot up to an annual 5.7 per cent, the highest in more than five years. The central bank raised its inflation forecasts to 4.9 per cent in 2019 from 4.5 per cent in 2018 and the 2019 projection to 3.7 per cent from 3.3 per cent.

Malaysia to establish a single system to hire foreign workers
(16 August 2018) Malaysia’s government seeks to establish a single system to hire foreign workers without differentiating the country of origin, in an effort to open competition to more recruitment agencies and stem the flow of illegal foreign workers. This comes after the suspension of 10 recruitment agencies processing prospective Bangladeshi workers due to the unreasonable hike in the cost of processing fees break the monopoly by the authorised recruitment agencies. Instead, the country will open up the recruitment to all agencies to break the monopolistic situation. Since 2016, more than 10,000 Bangladeshi workers have been recruited under the past system, with a backlog of more than 100,000. Apart from that, an independent task force will be formed and chaired by the highest-ranking civil servants to deal with the number of foreign workers and their legal status.

Cambodia’s export value marked at US$6.2 billion in the first half of 2018
(16 August 2018) Under the Generalized System of Preferences, Cambodia’s total exports increased from US$5.3 billion to US$6.2 billion in the first half of 2018, a rise of 15 per cent year-on-year driven by an increase in the exports of travel goods. The U.S had granted Cambodia with duty-free benefits for exports of travel goods like luggage, backpacks, handbags and wallet which saw the number of factories making these good increase by 60 over the last two years. More than US$11 billion of goods were exported from the country under the GSP in 2017. GSP is a U.S. trade program designed to promote economic development by eliminating duties on thousands of goods from 129 countries.

Indonesia to potentially substitute 500 imported consumer products with local products
(15 August 2018) Indonesia’s Finance Ministry, in a joint effort with Indonesia’s Industry Ministry and Trade Ministry, will review more than 500 imported consumer goods that could potentially be substituted with the local products. Those imported goods might then be levied with additional duties or taxes. In the first half of 2018, the value of Indonesia’s imported consumer goods rose by 21.64 per cent year-on-year to US$8.18 billion. Imported consumer goods account for a relatively small share of the country’s total import, at 9.19 per cent. Nevertheless, Indonesia is trying to address it’s rising current account deficit, which soared from US$8 billion in the second quarter from this year, in comparison to the previous quarter’s figure of US$5.7 billion.

Myanmar inks deals with Thailand on aviation sector, shrimp breeding
(15 August 2018) Myanmar has signed several agreements with Thailand to amend the existing rules governing the airline industry and to modernize a shrimp farming zone in western Myanmar. The agreement between the two nations, signed on the August 15, will see Thailand providing financial assistance to revamp a shrimp breeding centre and restore economic development in Myanmar’s western Rakhine region. Both nations also agreed to work together to double their current bilateral trade volume by 2022. Currently, it stands at US$6 billion. Thailand is Myanmar’s second largest trading partner, after China. The agreement strengthens ties between the two nations since the establishment of diplomatic ties in 1948.

Thai PM encourages development of a digital trade ecosystem for CLMVT region
Thailand’s Prime Minister Prayut Chan-o-cha called for the development of a digital trade ecosystem to service the CLMVT region, which comprises Cambodia, Laos, Myanmar, Vietnam and Thailand. If implemented, the system would incorporate existing e-commerce platforms, provide for the efficient movement of cross-border transport, as well as promoting common standards of interoperability. The CLMVT region is a popular destination for investment flows and trade, resulting in an average GDP growth for the group of 6.28 per cent in 2017. With an estimated 150 million internet users distributed among the five nations, the digital trade ecosystem forms part of a strategy to leverage on the benefits of information technology in the grouping’s pursuit towards a digital based economy.

Vietnamese plastic recycling industry fears bankruptcy as government imposes ban on scrap imports
(16 August 2018) Plastic recycling companies in Vietnam might be forced into bankruptcy after 4,000 tonnes of imported plastic scrap, a raw material used in their production, have been accumulating for months at the ports. The government recently tightened its own rule on scrap imports into Vietnam, fearing the country will become the new dumping ground for growing piles of garbage after China banned the entry of several types of wastes. The new regulations incited widespread criticisms among the plastic manufacturers due to the lack of well-defined guidelines. China was the world’s top destination for recyclable trash for years.

Malaysia seeks 10-fold increase in Singapore water rates
(13 August 2018) Prime Minister Tun Dr. Mahathir Mohamad has announced that Malaysia is seeking to raise the price of water sold to Singapore by more than 10 times from the rate. Currently, Malaysia sells untreated water to Singapore at 3 sen (0.7 U.S. cents) per thousand galloons and buys it back at 50 sen (12.0 U.S. cents). The Malaysian government now believes that there are certain terms in the 1962 Johor-Singapore water agreement which must be updated, in particular, to reflect the cost of living. The pricing of water has been a bone of contention between the two countries, along with the cost of the High Speed Rail (HSR) project, as the Malaysian government seeks ways to reduce its debt obligations.

Alibaba offers cloud computing for Southeast Asia’s retailers to embrace digitisation
(17 August 2018) Alibaba Cloud, the cloud computing arm of Chinese e-commerce giant Alibaba Group, is expanding their e-commerce services into Southeast Asia to help retailers digitise their operations. This initiative has already taken off in China where the company aims to integrate online and offline shopping experience. Alibaba is keen to extend the concept across Southeast Asia, a market of roughly 655 million people, by offering its latest suite of computing, ranging from cloud architecture and machine learning to the internet of things (IoT). Alibaba aims to serve 2 billion customers by 2036, handling US$144.6 billion in gross merchandise volume