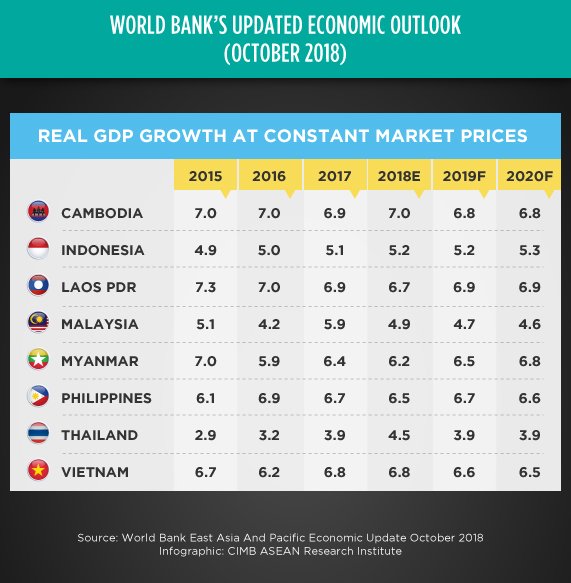 Trade war spurs Singapore firms’ aggressive overseas acquisitions
(4 October 2018) Singaporean companies announced overseas deals worth US$91billion from January to September 2018. This quantum is more than double the US$41.9billion during the same period in 2017. According to the data compiled by Bloomberg, the reasons for this development could be firms adopting a more aggressive stance amid the US-China trade tension and Singapore’s economy that is expected to expand next year at the slowest pace since 2016. Firms from Singapore have been involved in 68 acquisitions of Chinese companies so far this year, with transactions volume increasing from US$3.8 billion the same period of 2017 to US$19.5 billion.

New tourism development scheme devised for EEC
(3 October 2018) The Thai government has created a tourism development scheme for the Eastern Economic Corridor (EEC) with a five-year public-private budget of about US$6.1 billion. The scheme will be implemented based on provincial strength and uniqueness. The Board of Trade of Thailand chairman Kalin Sarasin said tourist numbers to Thailand are expected to increase by 1.5 times within 2021. In the first eight months of 2018, Thailand recorded a 9.9% rise in the number of foreign tourists, totalling 25.89 million. Total investment in the EEC is estimated at US$52 billion. The EEC is expected to see the number of tourists increase 1.5 times to 46.72 million by 2021, with revenue expected to hit US$16.1 billion. At the moment, the EEC attracts 29.89 million visitors, gaining about US$8.7 billion in income.

E-commerce giants look to attract Vietnamese sellers
(3 October 2018) E-commerce firms Amazon and Alibaba are looking to penetrate the Vietnamese market by signing up Vietnamese sellers for their online marketplace. According to Vietnam’s Ministry of Industry and Trade, around 200 businesses from Vietnam are selling on Amazon. It is reported that Alibaba sees Vietnam as a diverse manufacturer and looks to open Vietnam’s door to over 200 markets around the world. According to the Vietnam E-commerce Association (VECOM), Vietnam’s e-commerce market rose by 25% in 2017, and the association predicts this rate to continue until 2020.

European Union mulling trade sanctions on Myanmar due to Rakhine crisis
(3 October 2018) The European Union is looking to place trade sanctions on Myanmar due to the Rohingya crisis. According to a report by Thomson Reuters, three EU officials stated that the bloc could strip Myanmar’s tariff-free access to the EU. The sanctions, which are being discussed at the European Commission, could be placed on Myanmar’s lucrative textile industry and it would potentially put thousands of jobs in Myanmar at risk. Myanmar’s exports to the EU was recorded at US$1.81 billion in 2017, nearly 10 times the value in 2012, after which EU provided Myanmar “Everything But Arms” trade status. That status means Myanmar can sell any goods tariff-free to the EU, except weapons. The EU is Myanmar’s sixth-largest trading partner.

BI governor hints at possible interest rate hike ahead of similar move by US Federal Reserve
(3 October 2018) Indonesia’s Central Bank governor Perry Warjiyo has stated that Indonesia must increase its interest rate ahead of the United States Federal Reserve to withstand drastic capital outflows. His statement raises the possibility for the Indonesian interest rate to rise before mid-December when the Fed is expected to increase U.S. rates for the fourth time in 2018. Bank Indonesia (BI) has increased interest rates five times since May 2018 by a total of 150 basis points and intervened in the currency market to support the rupiah and to reduce volatility. Warjiyo’s statements came on 3 October 2018 after the rupiah hit 15,090 a dollar, its weakest in over 20 years.

Malaysia and Indonesia aerospace industry associations seal MoU to enhance human capital development
(3 October 2018) The Malaysia Aerospace Industry Association (MAIA) and Indonesia Aircraft Component Manufacturer Association (Inacom) are cooperating to improve human capital development to gain more job opportunities from leading aviation companies such as Airbus, Boeing and Rolls Royce. Both associations signed a memorandum of understanding (MoU) during the 3rd Kuala Lumpur International Aerospace Business Convention (KLIABC) 2018. Malaysia’s aerospace manufacturing exports are expected to reach US$2.2 billion in 2018 compared to US$2.05 billion in 2017 due to increase in the order for aircraft components. In 2017, Malaysia’s aerospace export surged 54 per cent to US$2.05 billion from 2016, with main exports being parts and components, particularly for wings, empennage and aircraft fuselage.

Thailand to establish cooperation between Japan and Mekong sub-region
(3 October 2018) Thailand will be working on developing a cooperation framework between the Mekong sub-region and Japan in the 10th Mekong-Japan Summit which will be held from 8 to 9 October 2018. Thailand’s Prime Minister Prayut Chan-o-cha is expected to attend the summit and will discuss collaborations with Japan on development projects in the sub-region. Thailand is interested to collaborate on connectivity development plans, the enhancement of the ASEAN community, and the development of human resources. Japan is interested to support development projects in infrastructure, connectivity, logistics and the services sectors.

Cambodian government mulls tax on e-commerce sales and designing policies
(27 September 2018) The Cambodian government is looking to implement a tax on e-commerce sales and creating policies to help aid expansion of the sector in Cambodia. Cambodia’s Finance Minister Aun Pornmoniroth acknowledged an increase in the use of technology across most business sectors in Cambodia as consumers are taking advantage of the digital economy by using online payments. According to a statement issued by Cambodia’s Ministry of Economy and Finance (MEF), Cambodia has no actual mechanism to collect fiscal revenue from e-commerce operations. The MEF did not detail what type of online business is defined as e-commerce, or what kind or size of a business transaction would be subject to tax obligations in the future. According to a United States Department of Commerce report, Cambodians are adopting e-commerce both as consumers and merchants, and there is significant untapped market potential in the sector fueled by exploding internet access, high smartphone penetration and a young, growing middle class. The report stated that in just eight years, the number for active internet users has risen from 28,000 to 7.1 million while the number for social media users has reached 4.9 million.